I had visited the Grand Gulch Cedar Mesa area several times before but continue to be intrigued by the area especially with all the ruins one can see. Five of us Texan folks set out on April 11 planning to a hike from the Todie TH down Todie canyon to Grand Gulch and then exiting at Government TH. 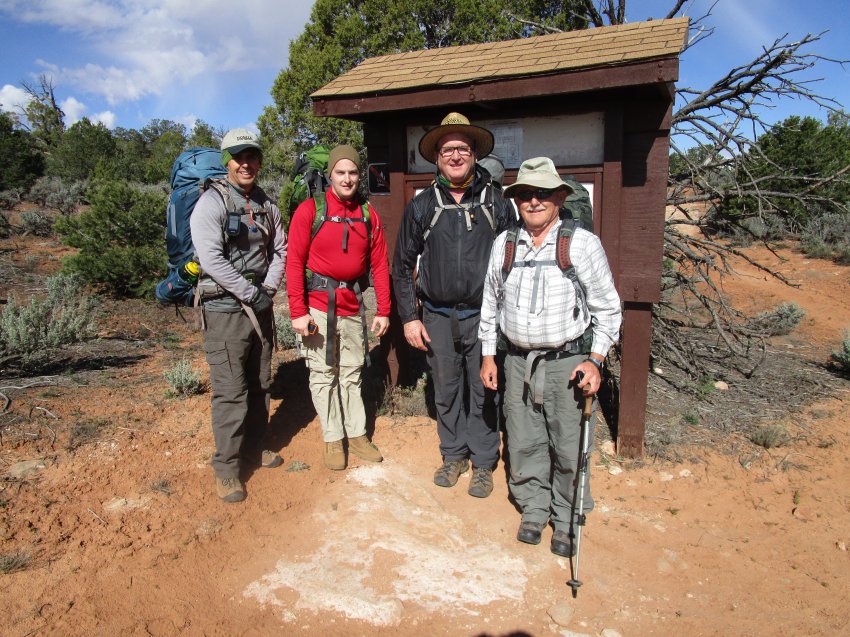 The following is a map of the Cedar Mesa area with the trailheads. 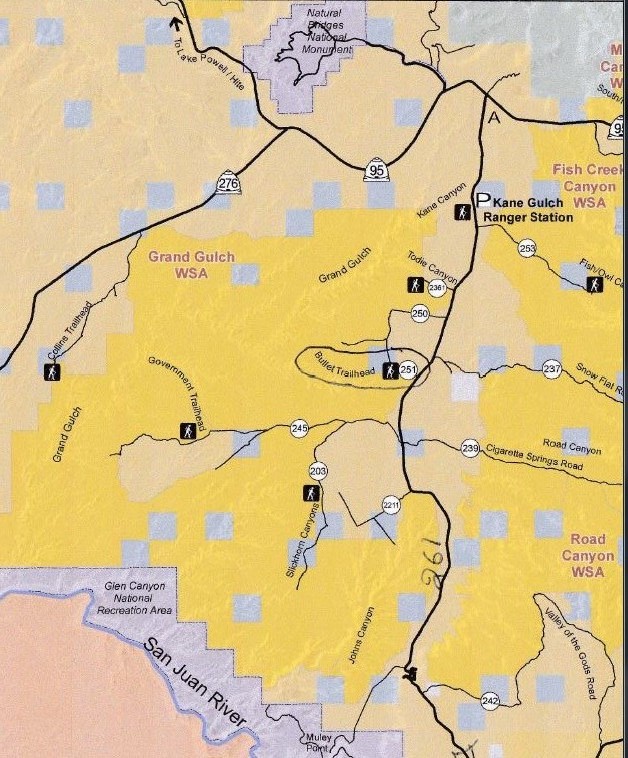 The rules for Grand Gulch include seeing a video at the Kane Gulch ranger station and then we had to do a car shuttle which took nearly an hour as it is a long ways down to the Government Trailhead so we didn't get started until after 10 am on Tuesday. We were warned that Todie was a rough entry and not advised for novice hikers. It was rough as shown in the pictures below but is feasible to enter without ropes (if a 69 year old man can do it then it should be feasible for most hikers). Below are 2 pictures of the entry area. 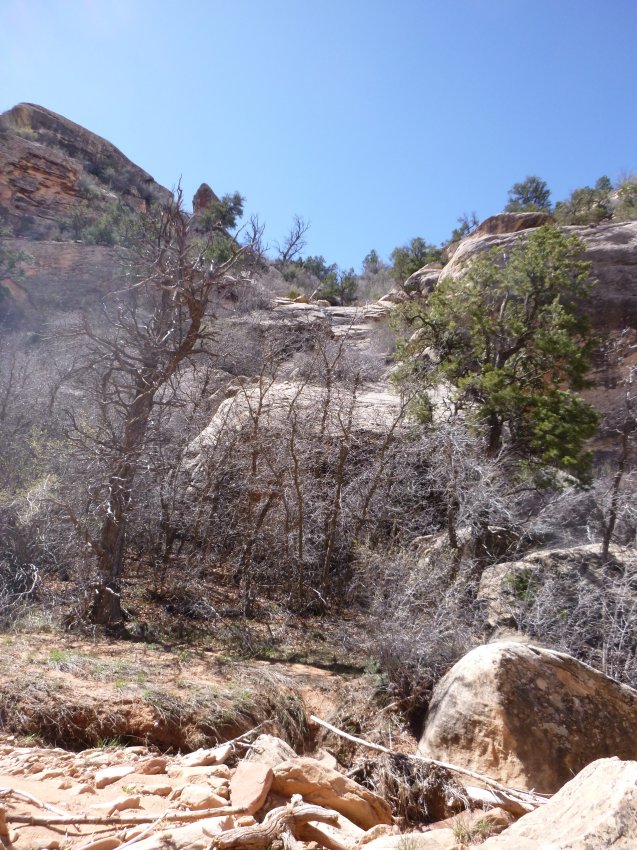 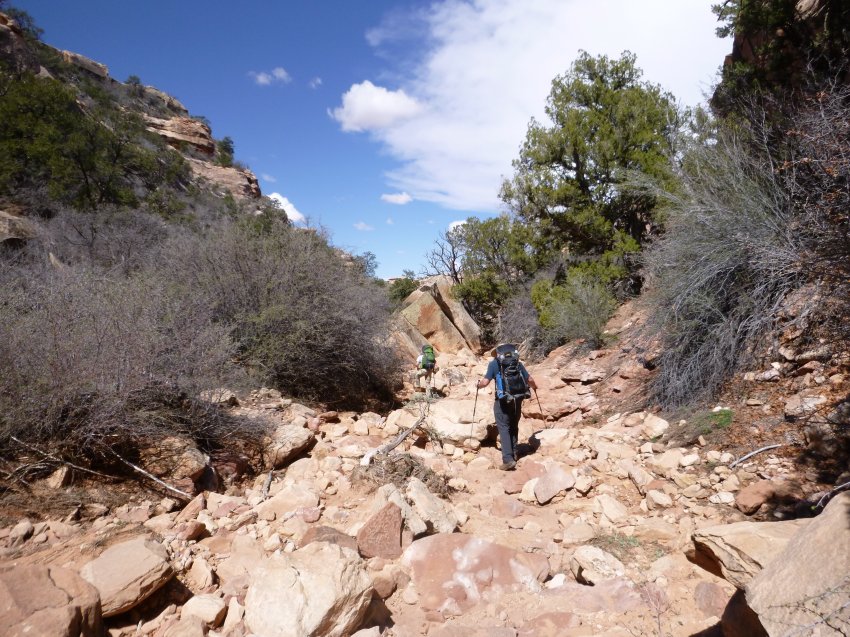 As this was a wet winter and spring, water was no problem. Yes there are dry stretches BUT the major canyon entries all had plenty of flowing water. 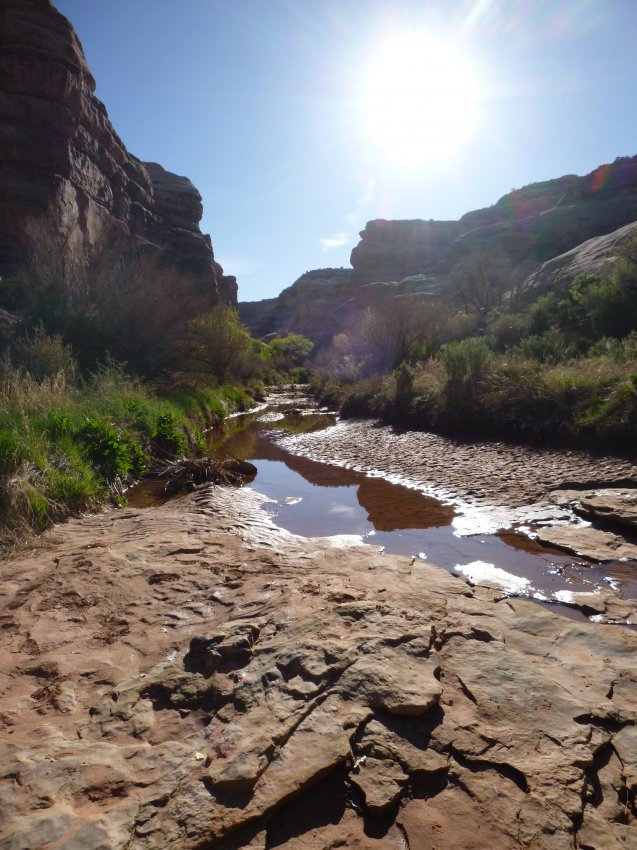 Our hike was planned for trail distance of 24.2 miles so this meant approximately 8 miles/day as we needed to be out before noon on Friday. We did not anticipate the trail to be as brushy as it was so we had overestimated the mileage we could attain in a day. Eight miles sounds short but the trails or should I say improvised foot paths continued to be thru brushy areas and as expected up and down sand banks. Hence we did not get to see as many ruins as we had hoped. The following are a few pictures of the landscape and ruins on the trip. 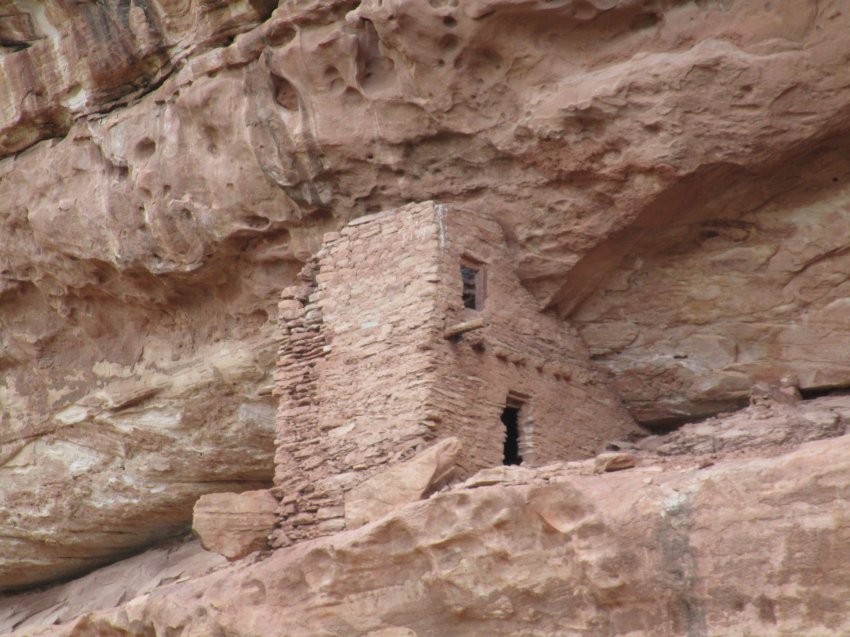 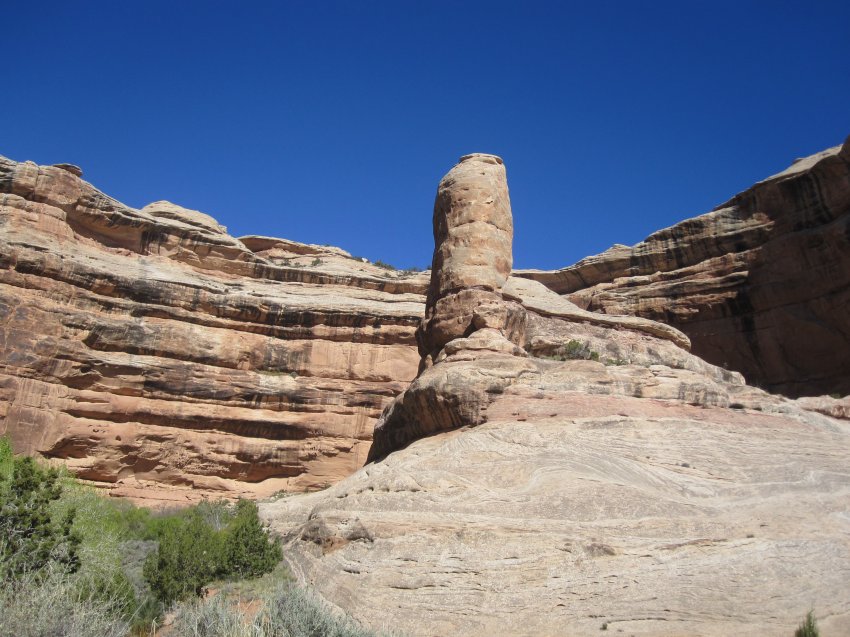 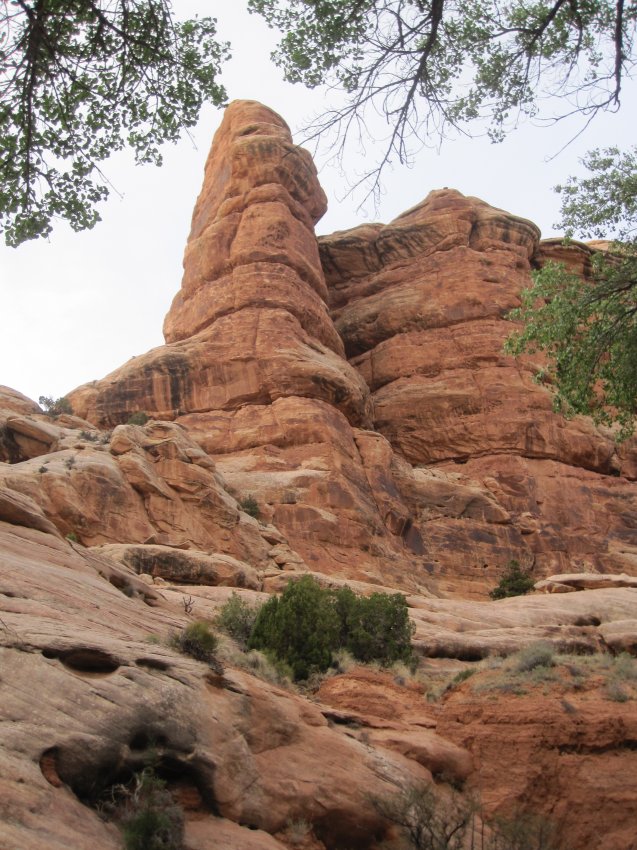 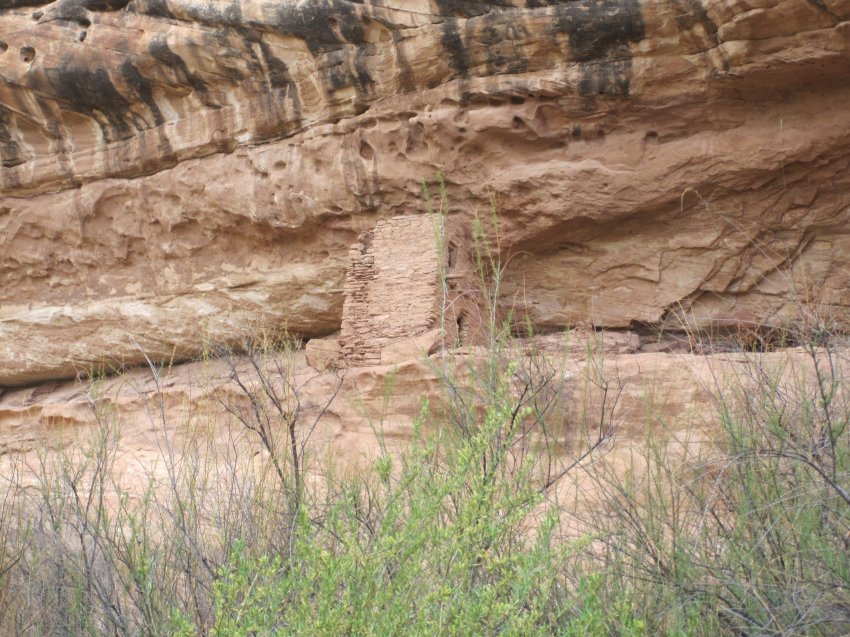 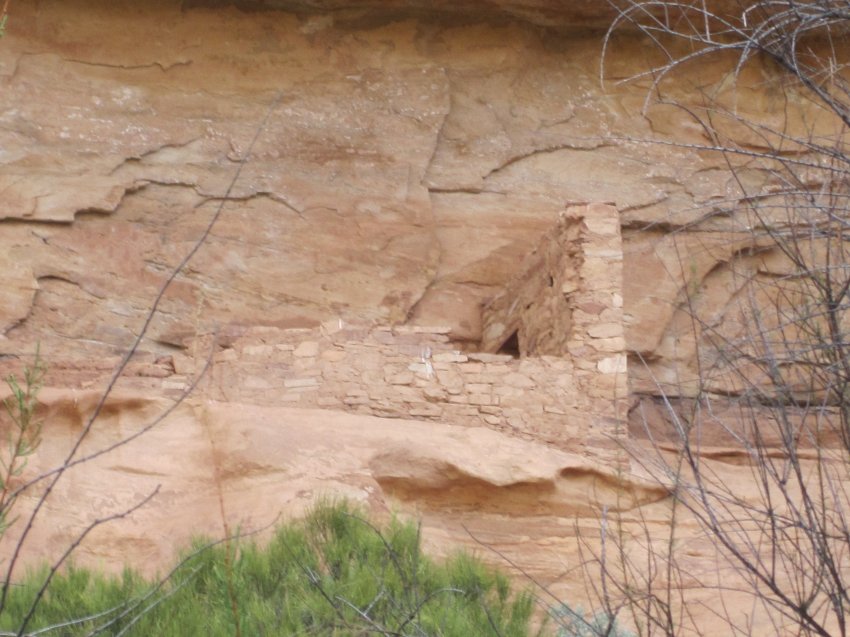 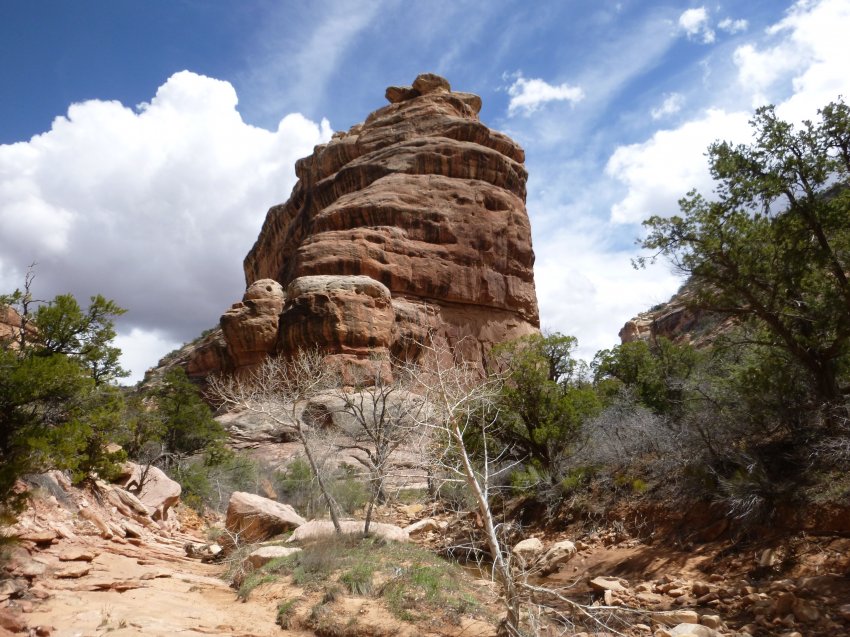 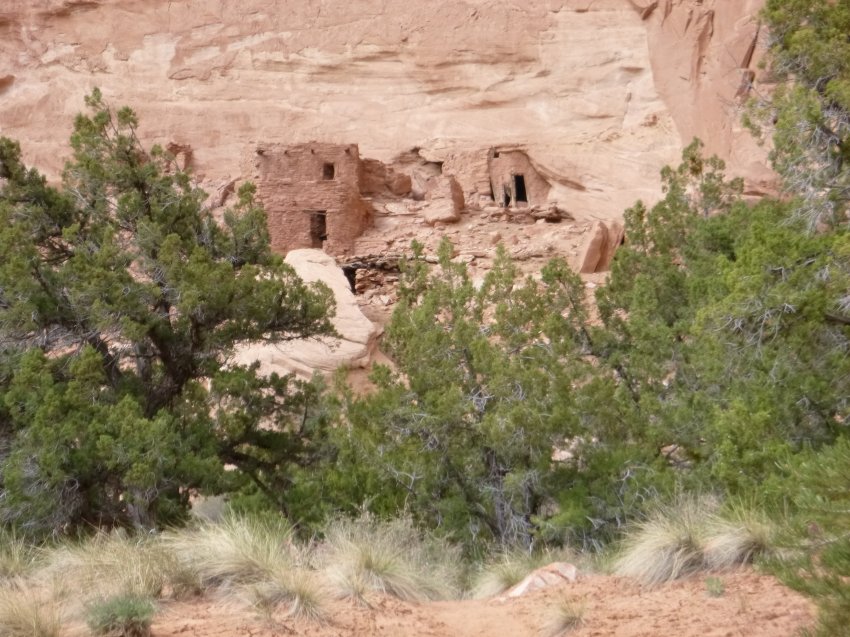 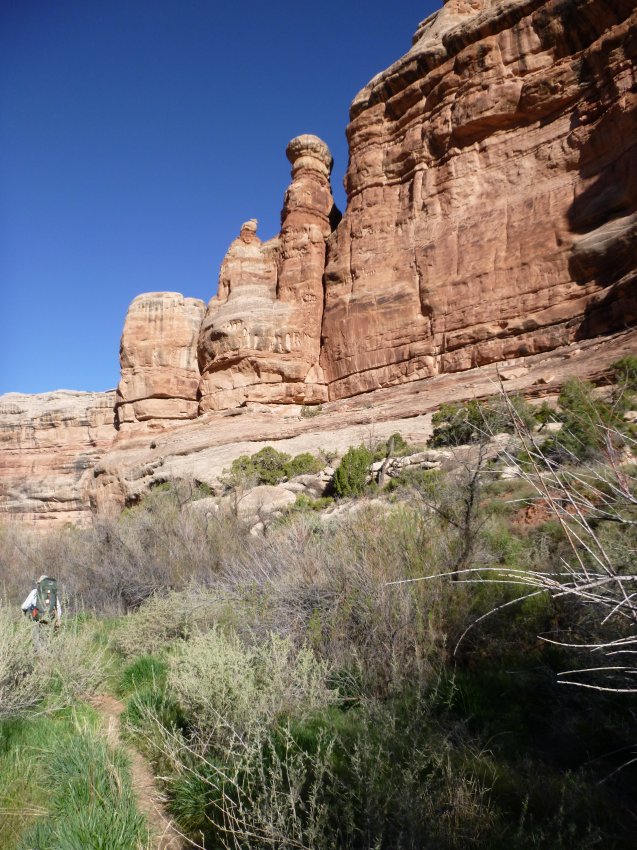 This final image is a view from about half way up the Government Trail looking back to the NW across Grand Gulch. Note the extensive dwellings near the top center. Amazing. 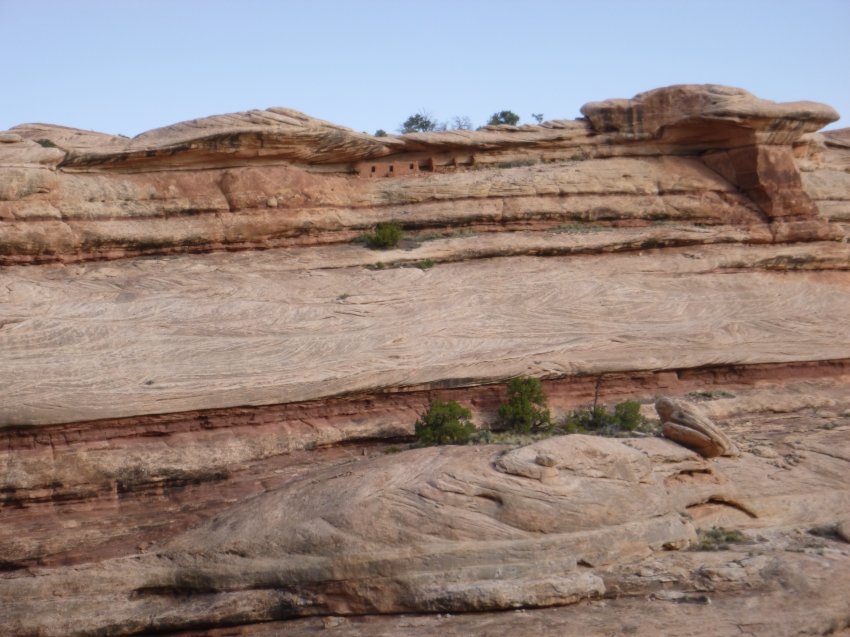 Of course going DC there is not problem getting lost (all roads lead to Rome). However, if you are relying on GPS and Topo maps you might be mislead as to the location of the Government exit. The maps I obtained (used Mytopo.com) seemed to indicate the exit was right at Polly's Canyon as did my friend's GPS. However, it is about 1/4 mile down canyon where the Grand Gulch turns back west. (I had been in here before and did remember this but had a hard time convincing the folks with me of this location) We did find the exit after I finally convinced my group to explore DC.

We had planned (had reservations) to go see Moonhouse but did not have time. Something for the next trip.

Eugene said:
... We did find the exit after I finally convinced my group to explore DC.
Click to expand...

Ahhh... So THAT is what all the yelling was about Friday morning. Was camped nearby and heard the convincing taking place.

Oh, are you the group we ran into on Thursday evening near Pollys?
Randy Langstraat | ADVENTR.co

DAA said:
Ahhh... So THAT is what all the yelling was about Friday morning. Was camped nearby and heard the convincing taking place.

IntrepidXJ said:
Oh, are you the group we ran into on Thursday evening near Pollys?
Click to expand...

They only allow 20/day to visit moonhouse

IntrepidXJ said:
Oh, are you the group we ran into on Thursday evening near Pollys?
Click to expand...

Eugene said:
They only allow 20/day to visit moonhouse
Click to expand...

Nothing stays the same. I go mid-summer and there are few people there. It's been a few years but the last time we were treated to a raging flash flood in the bottom.
Onward through the fog.
You must log in or register to reply here.
Similar threads