The northern boundary of the Dome Plateau is marked by a cliff line. Not very high but notable. Above and to the North are The Highlands.

This cliff line has some seepages on a horizon separating different layers of stone. The most important one can be found North of Squaw Park. A place named Caves Spring is marked on the USGS Topomaps. 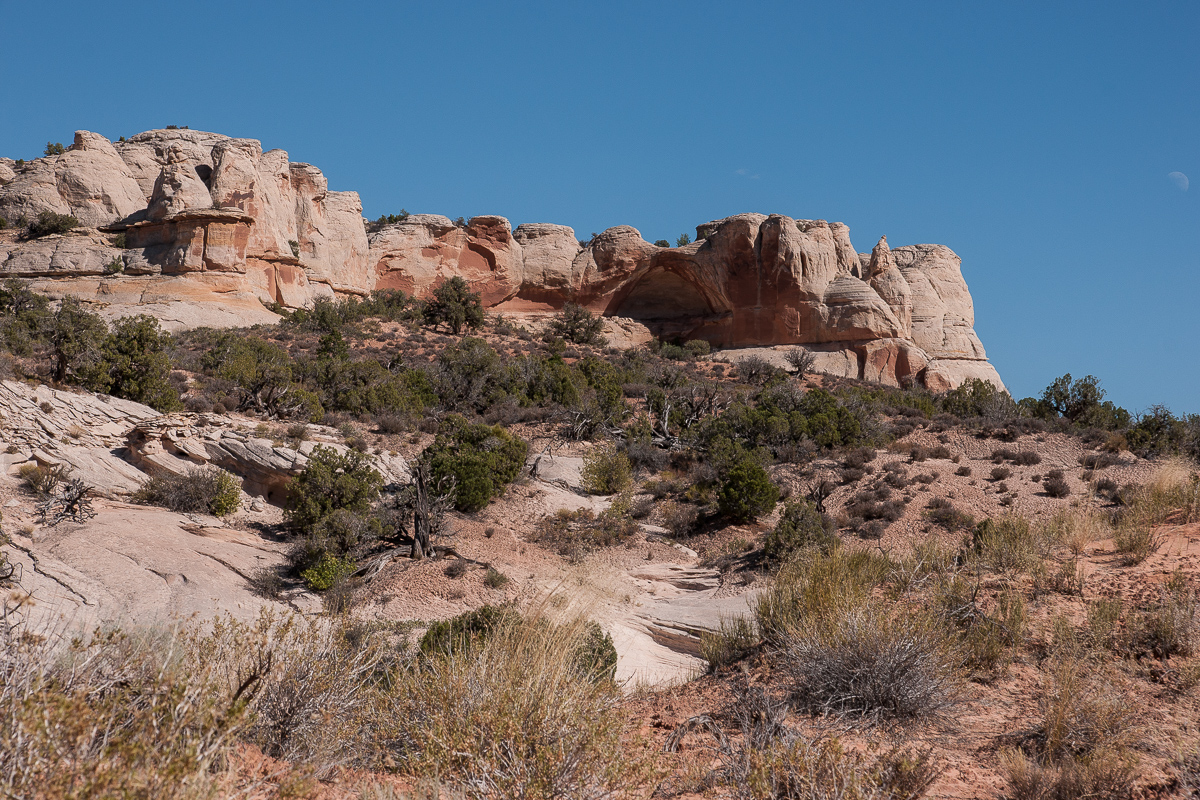 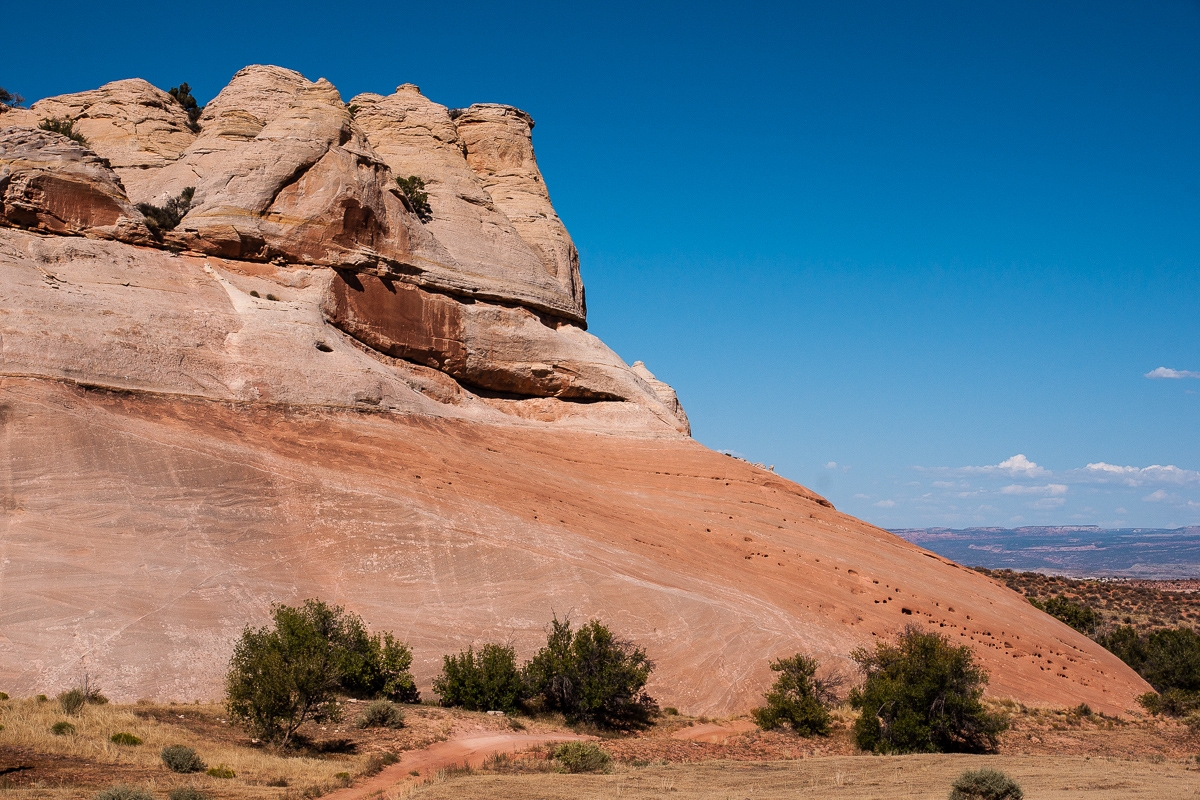 Seems to be windblown deposits

At 4 pm there is shade below the cliff line - nice for people but not alway nice for taking pictures. The range of contrast is enormous.

The furthest cave to the east is not seen at first. Only tracks over a sandy hill - like a dune - reveals that there must be something interesting. 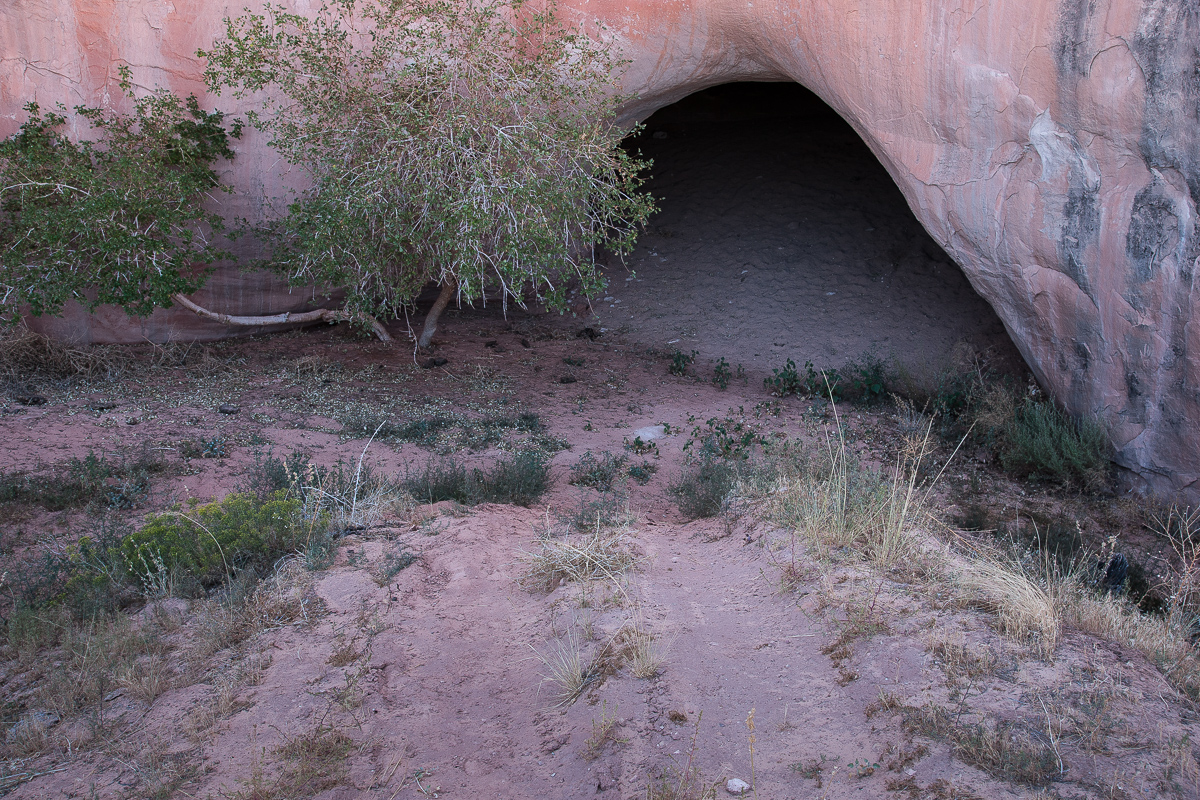 The cave behind the hill

The tree seems to be an indication for moisture in the ground. 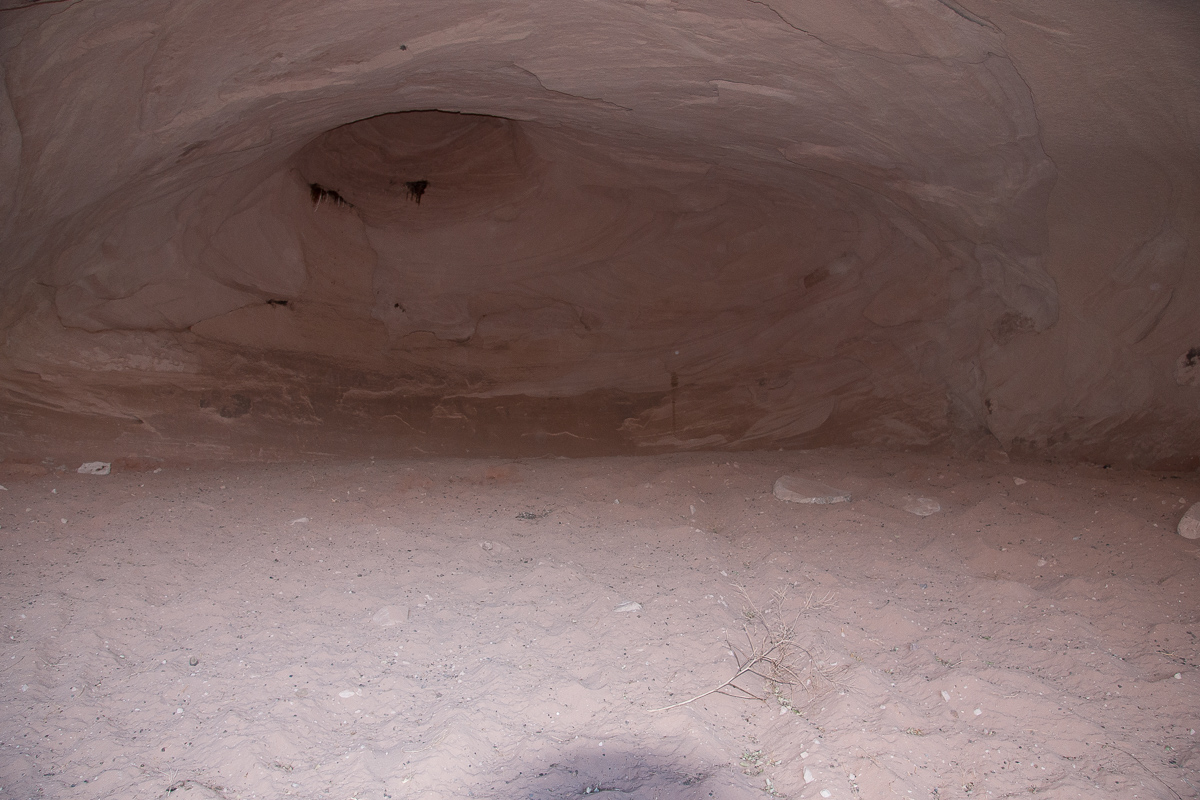 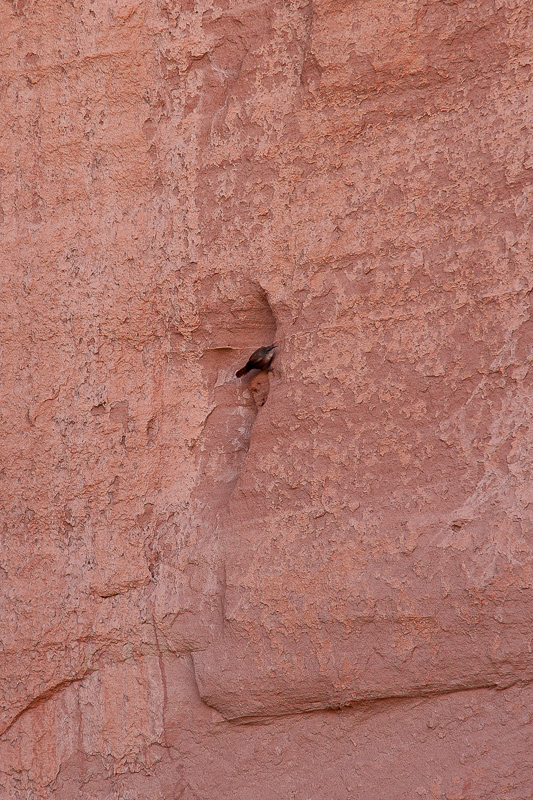 Not far away a new startup cave can be seen. As far as we know the feature has a name - 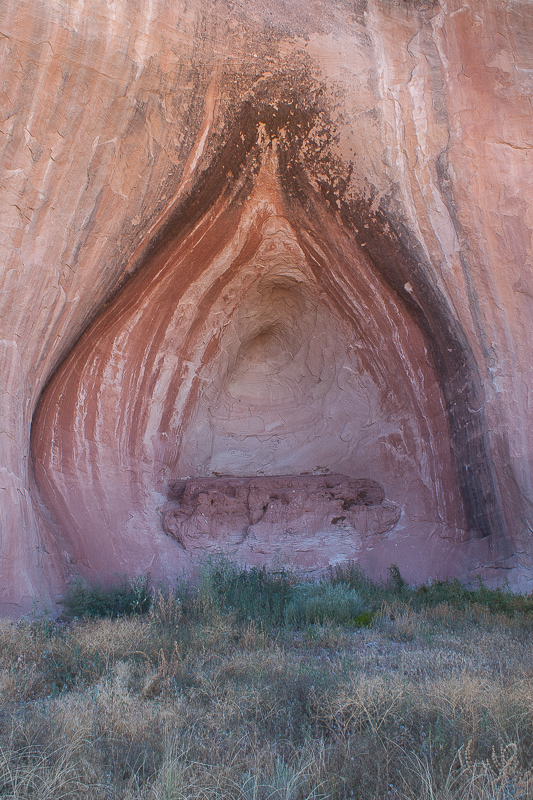 To the south one can see over a distance - the LaSal Mountains and Top of the World. To the east Uncomphagre Uplift.

Only a short distance to the west is the next cave. It must have (had?) much more water at times. A water trough is installed but we found it dry. 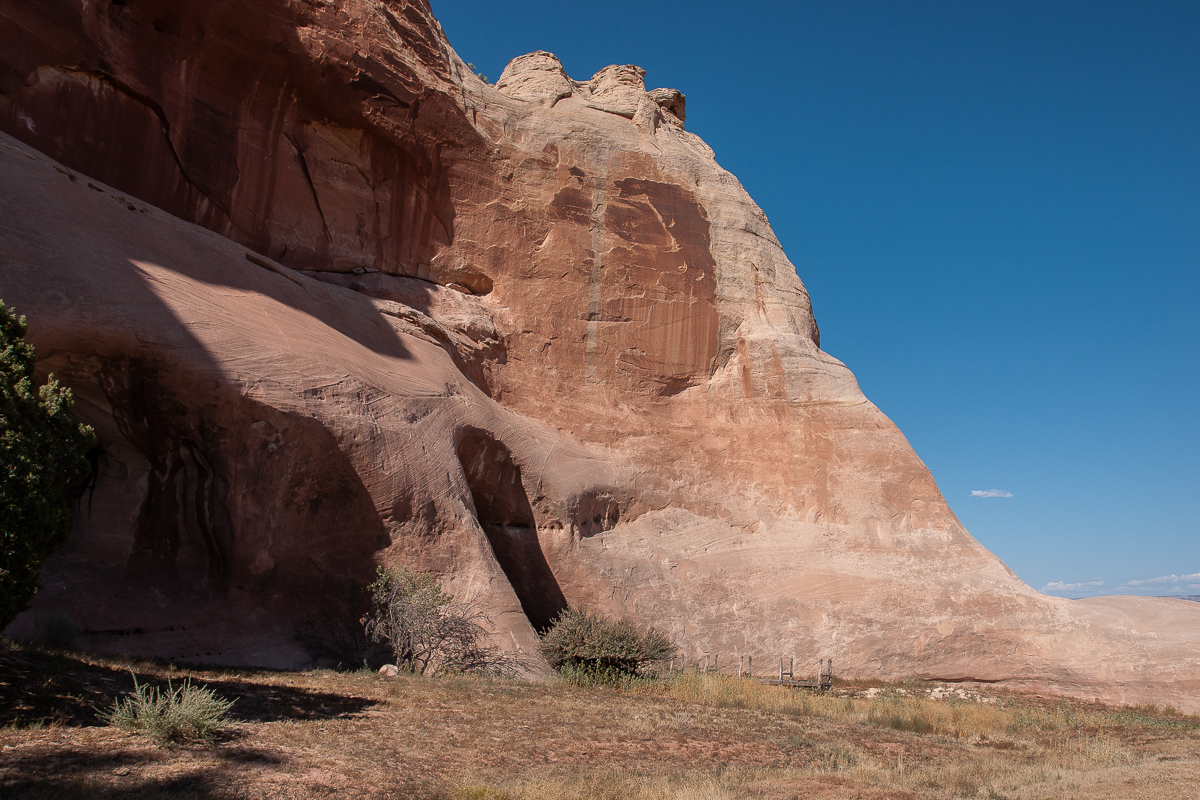 A watering hole for aminals, but dry at the time we visited the place

Caves Spring is next. Seems to be the largest cave. Three closely spaced openings mark this cave. The one on the right side is not more than a shallow alcove, the one in the middle can be called a baby cave, the left one is the real thing.

The area in Front of the cave ist blocked by a fence with a passage for people only. Guess this was done to restrict vandalism a bit? 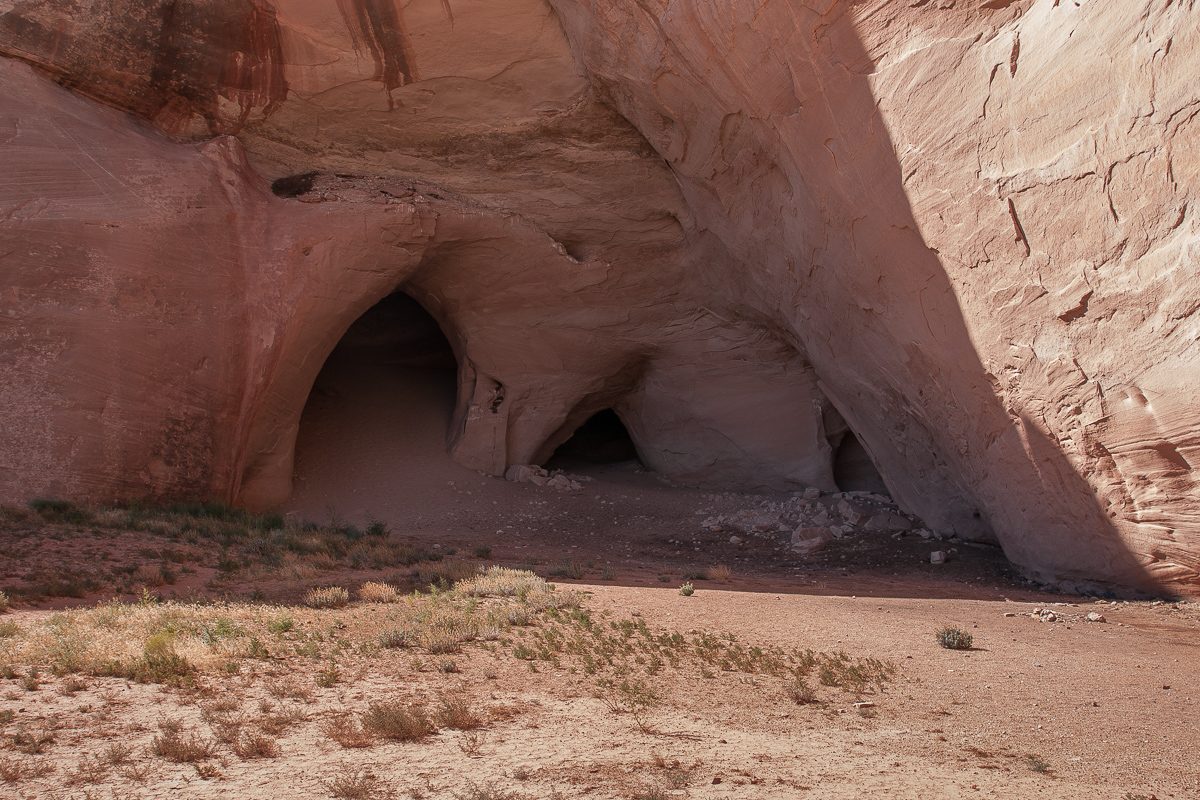 To enter the cave it is necessary to climb a sand hill. On top it divides in a short right branch and a much longer left one. 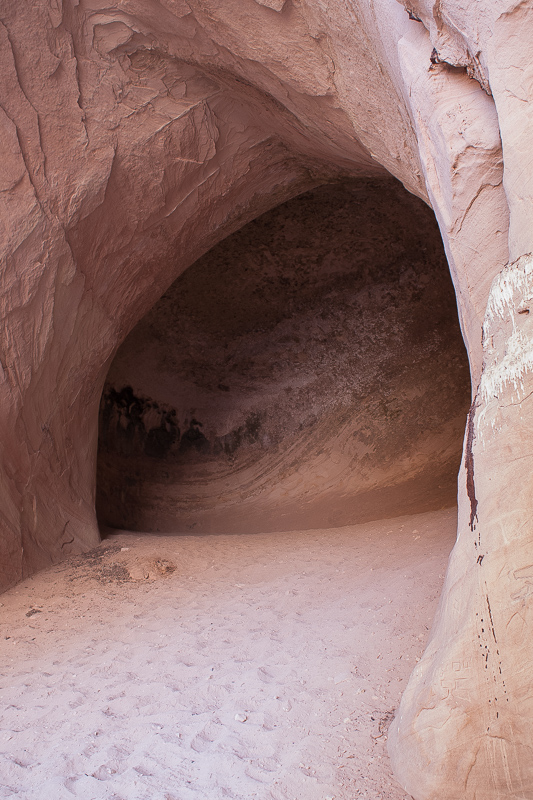 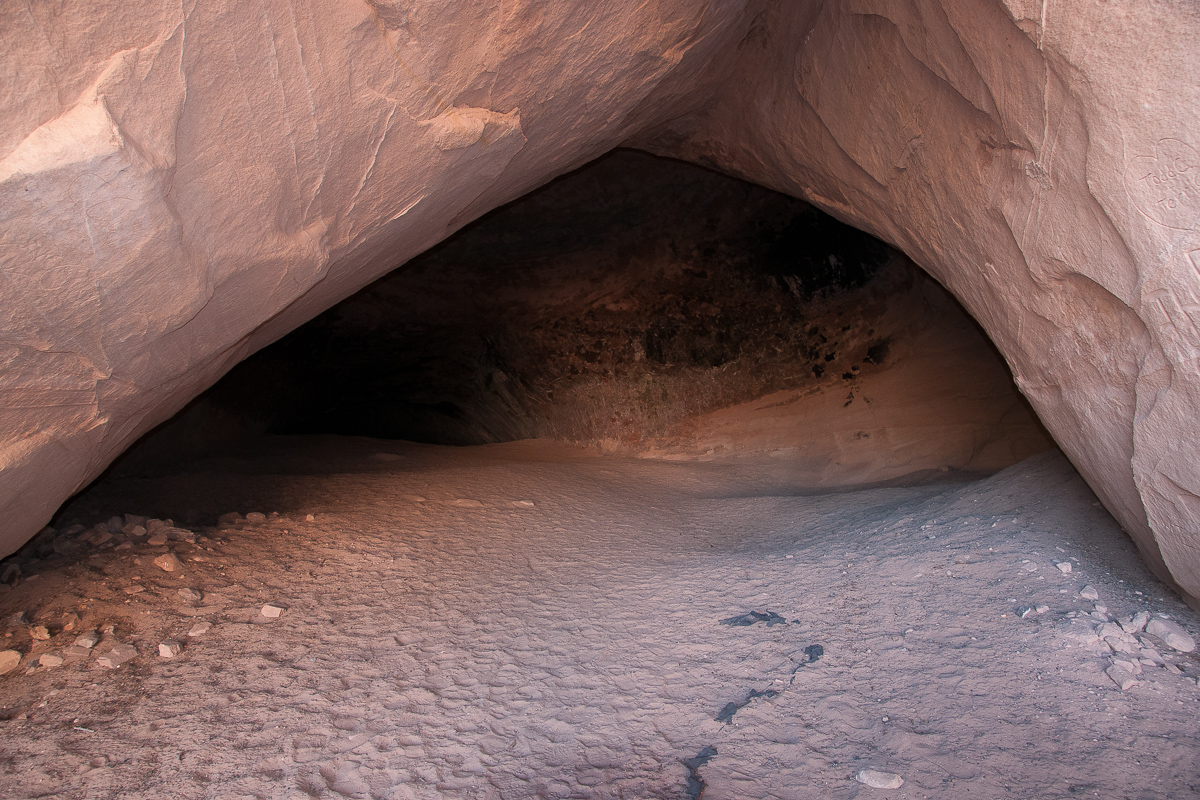 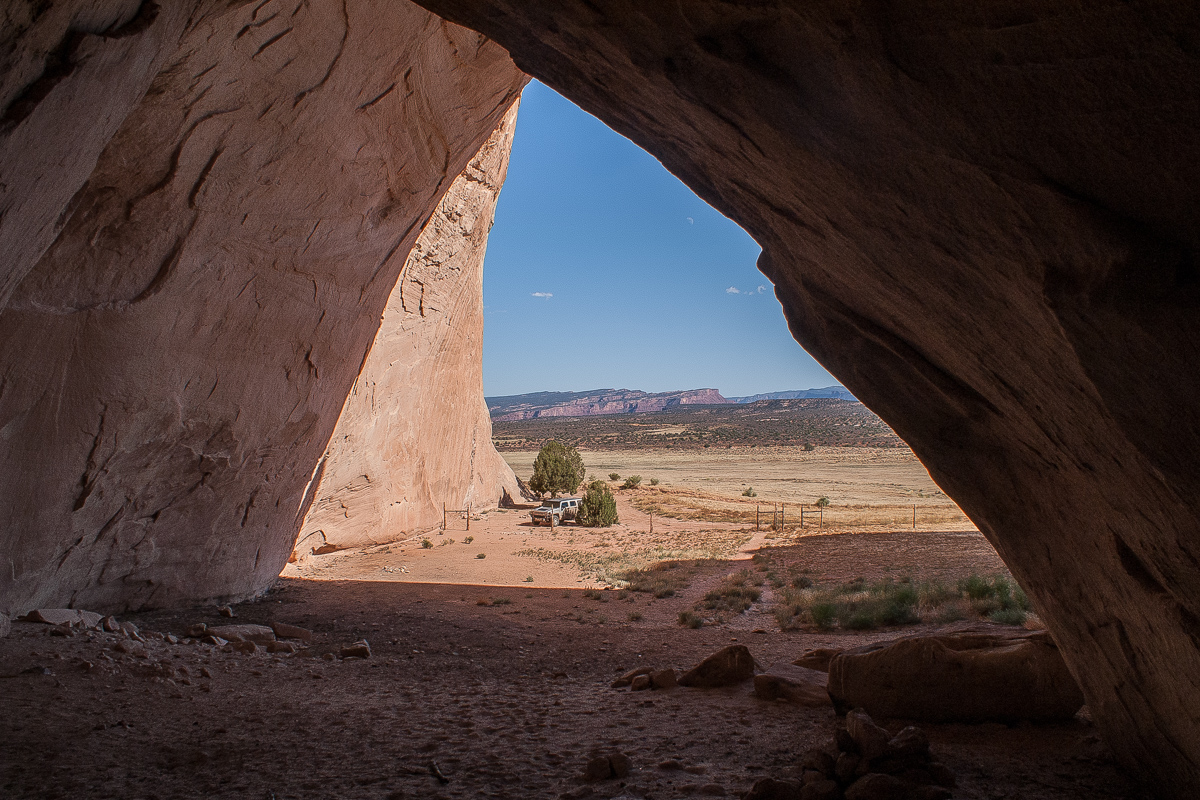 Looking back for a nice view

The left branch trends upwards too but much shallower. After a crest you enter a slightly deeper lying chamber - the end. There it is cool an moist. One or two water puddles will be there. It's good to have a flashlight even if it is not pitch dark. It prevents from stumbling over rocks lying there. 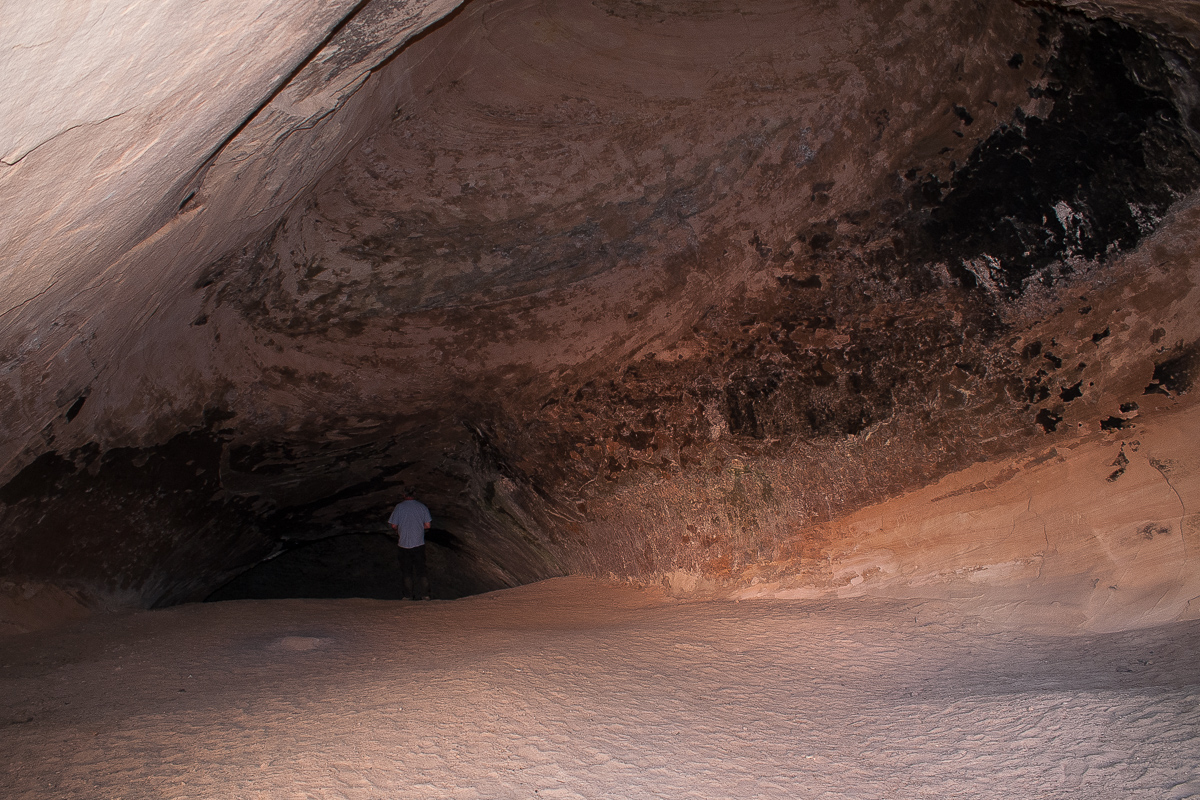 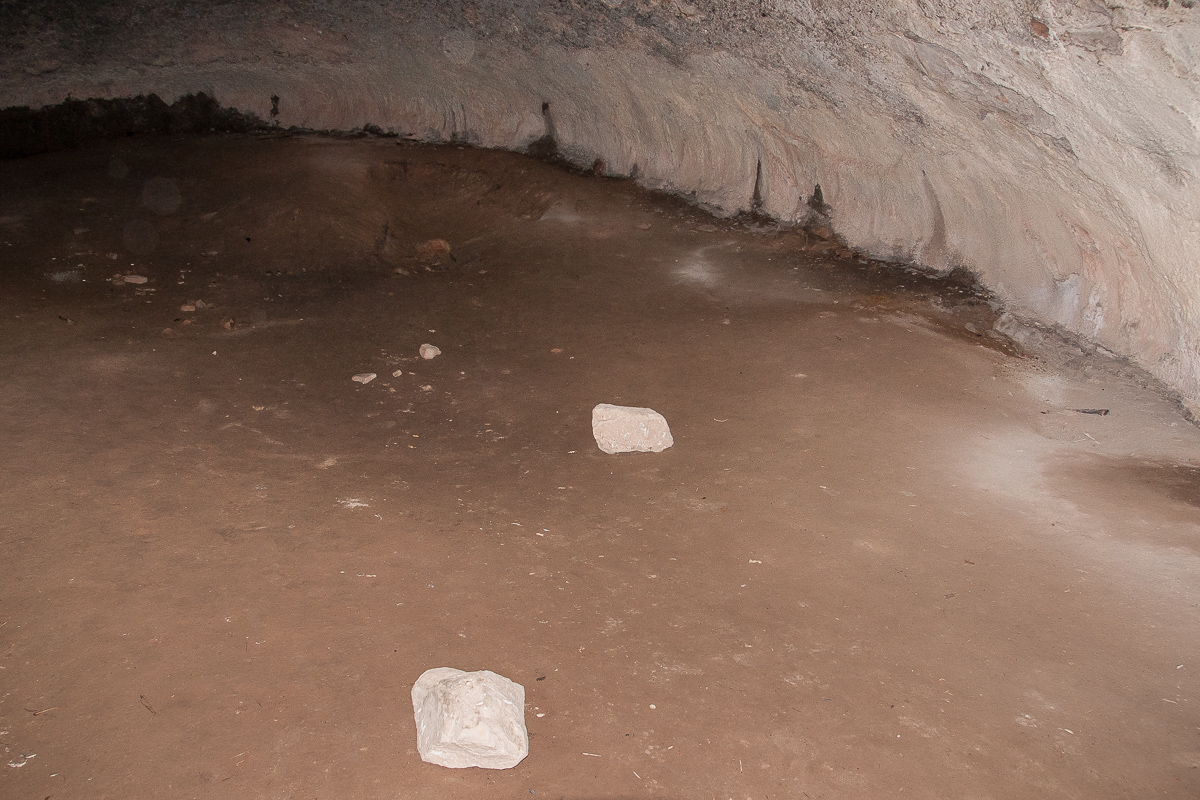 Water and rocks at the end.

It is silent there but occasionally there are vague sounds. Dripping! At first I didn't see anything. At least it did not drip from the ceiling. Then I remarked these dark patterns on the walls. These are the spots where the dripping is coming from. Drops are running down the wall. 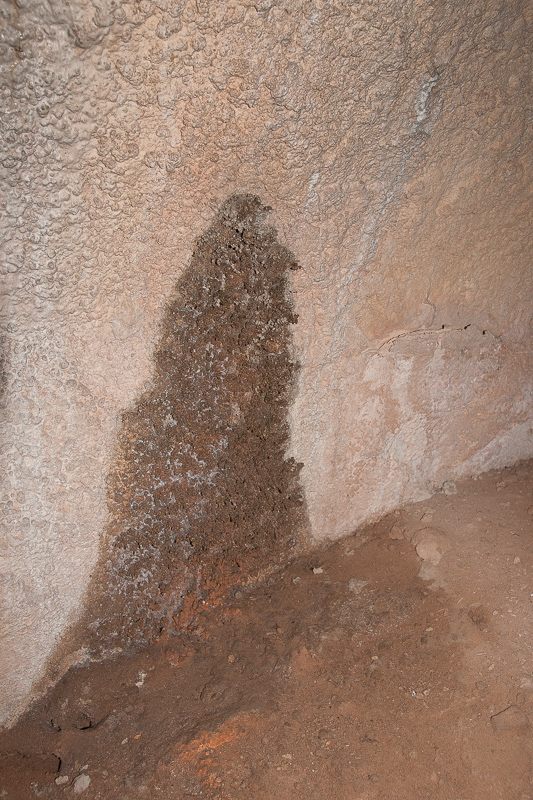 The dark cover seem to be deposited minerals 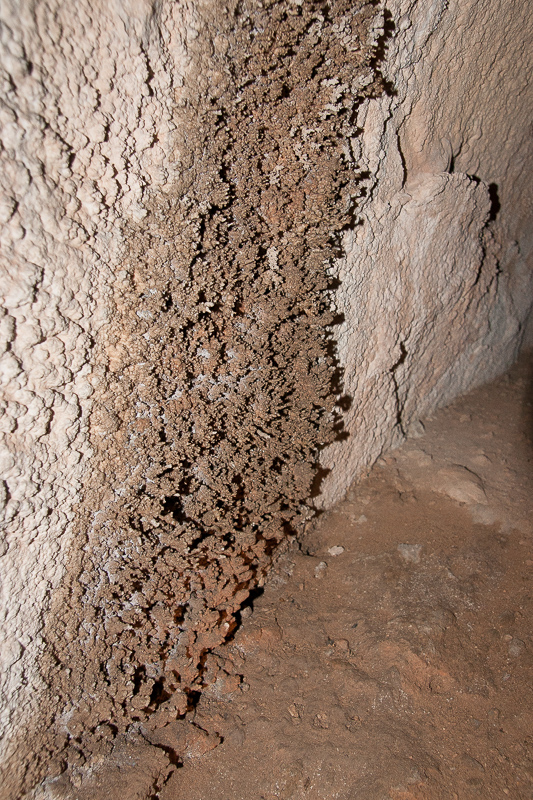 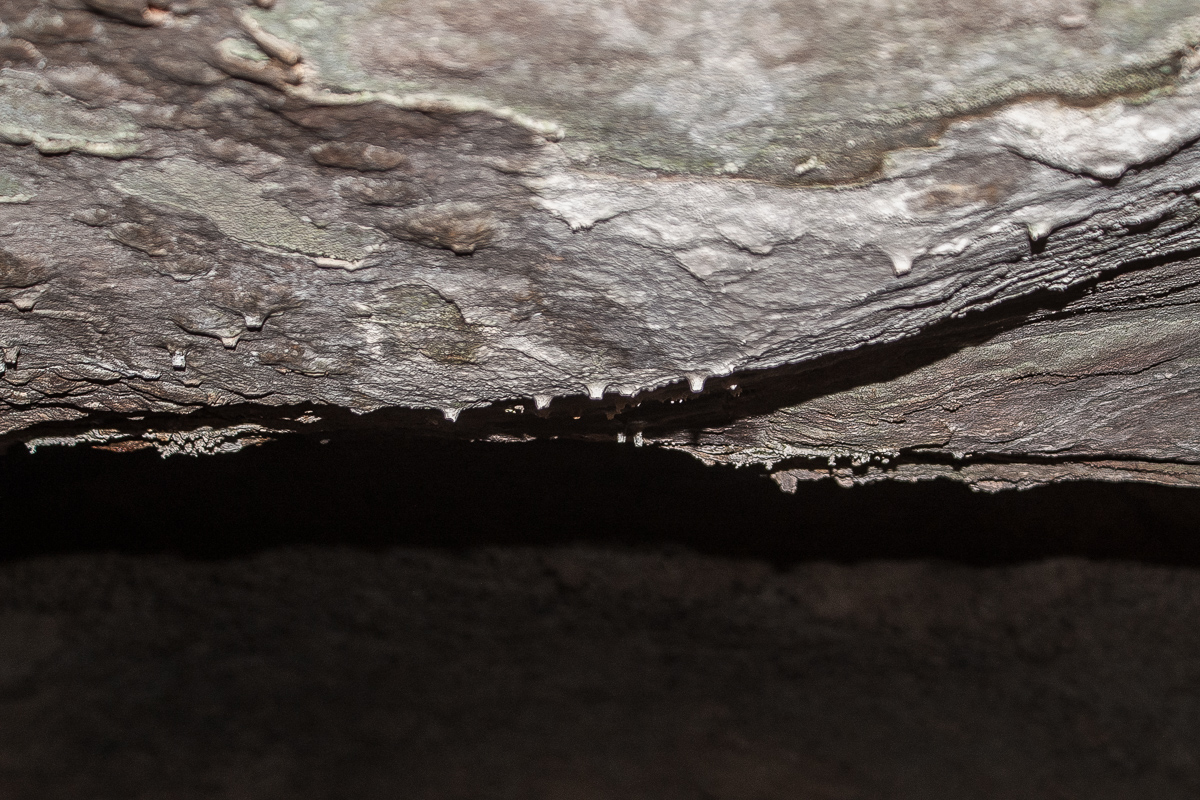 On the ceiling: some very small stalactites.

After some minutes one starts to freeze a bit craving for the warmth (heat) outside. It is simply a damp room. 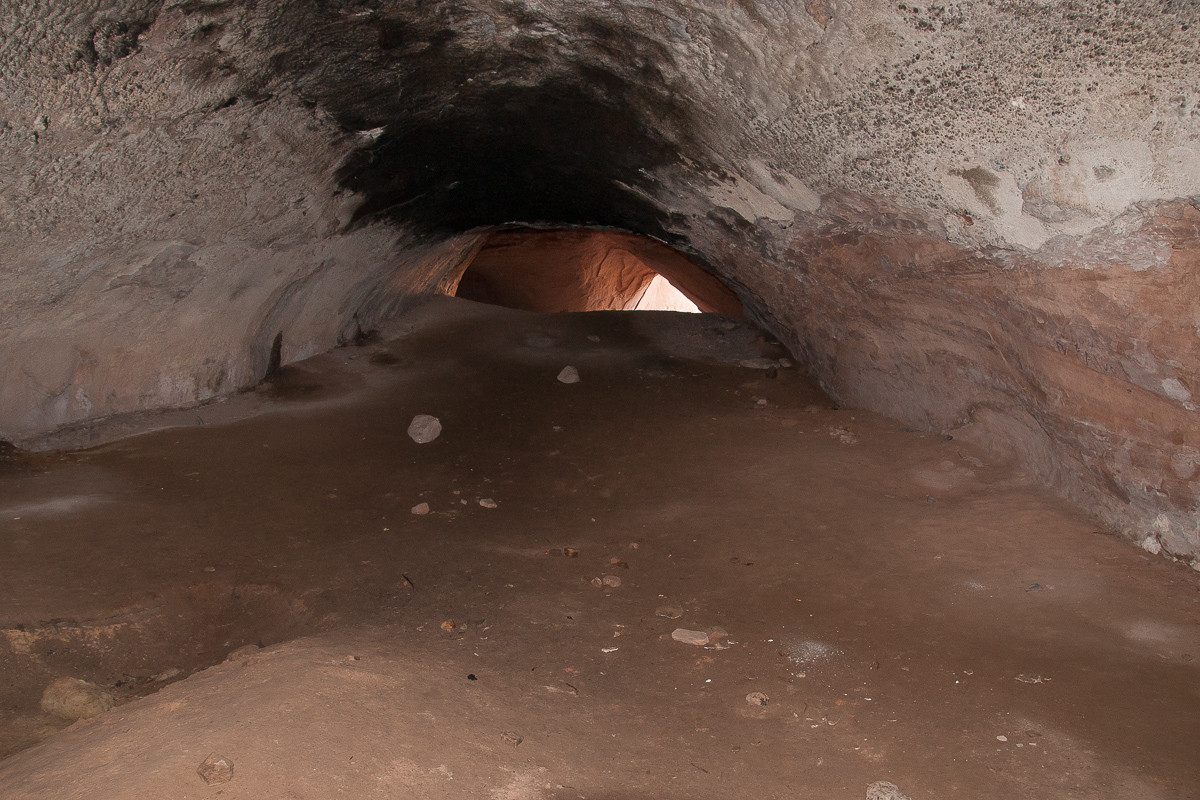 You always can see where the entrance is

Lady didn't follow me into the cave. She waits in the shadow of the entrance. 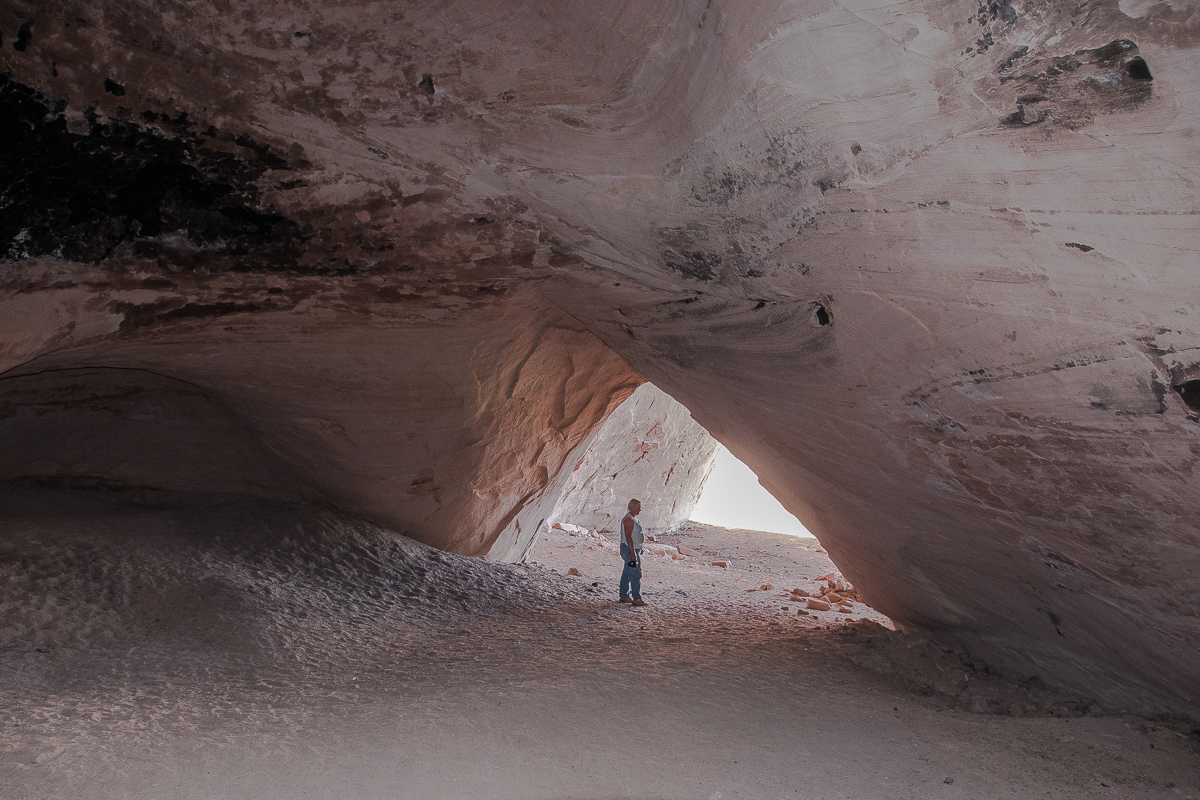 Lady did not want to spelunker 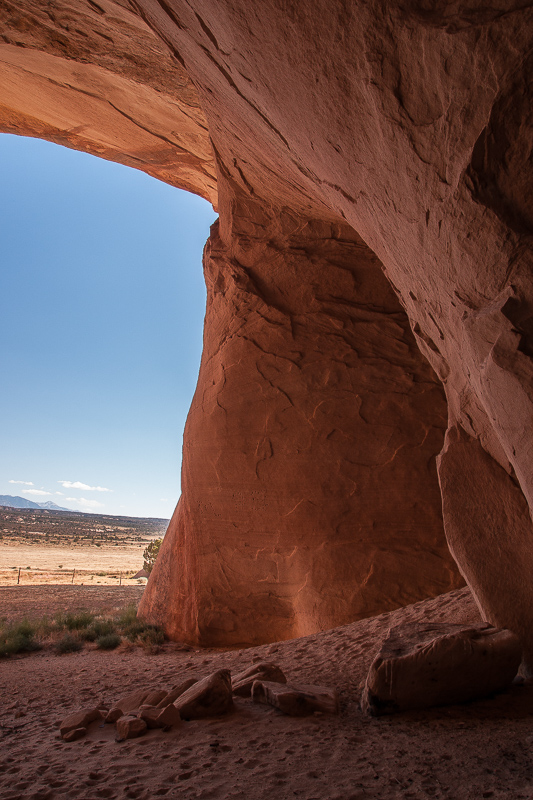 Back to the light

Not far away from the entrance we found this feature: 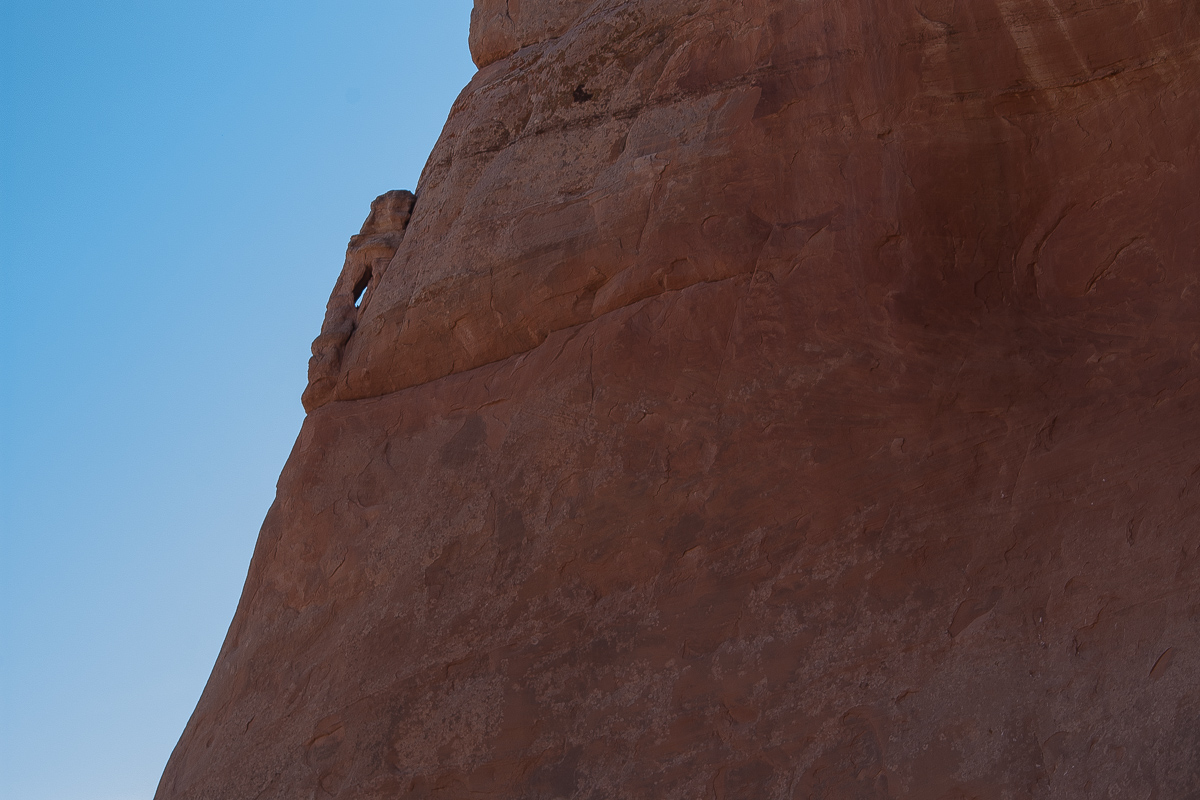 My wife named it "Creeping Arch"
Desert Drunk and Red Rock Crazy Southwestern Tales
You must log in or register to reply here.
Similar threads