About a year and a half ago Blake and I made an initial, brief visit to Capitol Reef National Park. Ever since, we've wanted to get back there but one trip or another put CRNP on the back burner. Well, the time had come! While not a grand back-country adventure, herein lie the high points and the low points of our trip. Perhaps it will serve useful to future hikers.

The day’s destination was Sulphur Creek (thanks to Intrepid XJ’s suggestion). This is a hike normally completed by dropping into an unnamed wash west of the Chimney Rock trailhead, hiking to the confluence with Sulphur Creek, making your way down Sulphur, and popping out behind the visitor center. So, obviously, this requires a shuttle of some sort. Not having been rode in quite some time, we didn’t know what shape our bikes were in for getting us back to the trailhead so we decided to hitch along Highway 24. Traffic was light. One car went whizzing by, five minutes passed, a second cart sped by, 3 minutes passed. Rinse and repeat. I didn't think we particularly looked deranged or suspicious, but we couldn’t manage to persuade a single driver to give us a lift. So, we called it at ten cars and changed our destination to Pleasant Creek (thanks to WasatchWill’s inspiring trip reports).

Upon arriving at a parking area next to some old ranch buildings, we struck out northeast for the prehistorically-decorated cliffs. Wearing shorts and tennies (‘cuz we thought we’d be wading and swimming in Sulphur Creek) we weren’t prepared for the waist-high brush we encountered along the way. It was getting H-O-T, our legs were all scratched up, and the “trail” we were following completely petered out. We scouted around for another trail but nothing panned out. Ugh. We cut bait and decided to go to Plan C. After getting back on the road I realized that we should’ve driven a little further south - where the real Pleasant Creek trail can easily be found. Grrr.....

Back up the road to Capitol Gorge we went. I’m thinking “short hike, nice rock art, pioneer signatures, might be some shade what with the high walls…”. Well, the hike was short but there was very little relief from the sun. And all that sun made it rather difficult to see the glyphs, let alone photograph them. We continued on to the pioneer register. I was frustrated and grumpy by then and was glad to turn around at that point. 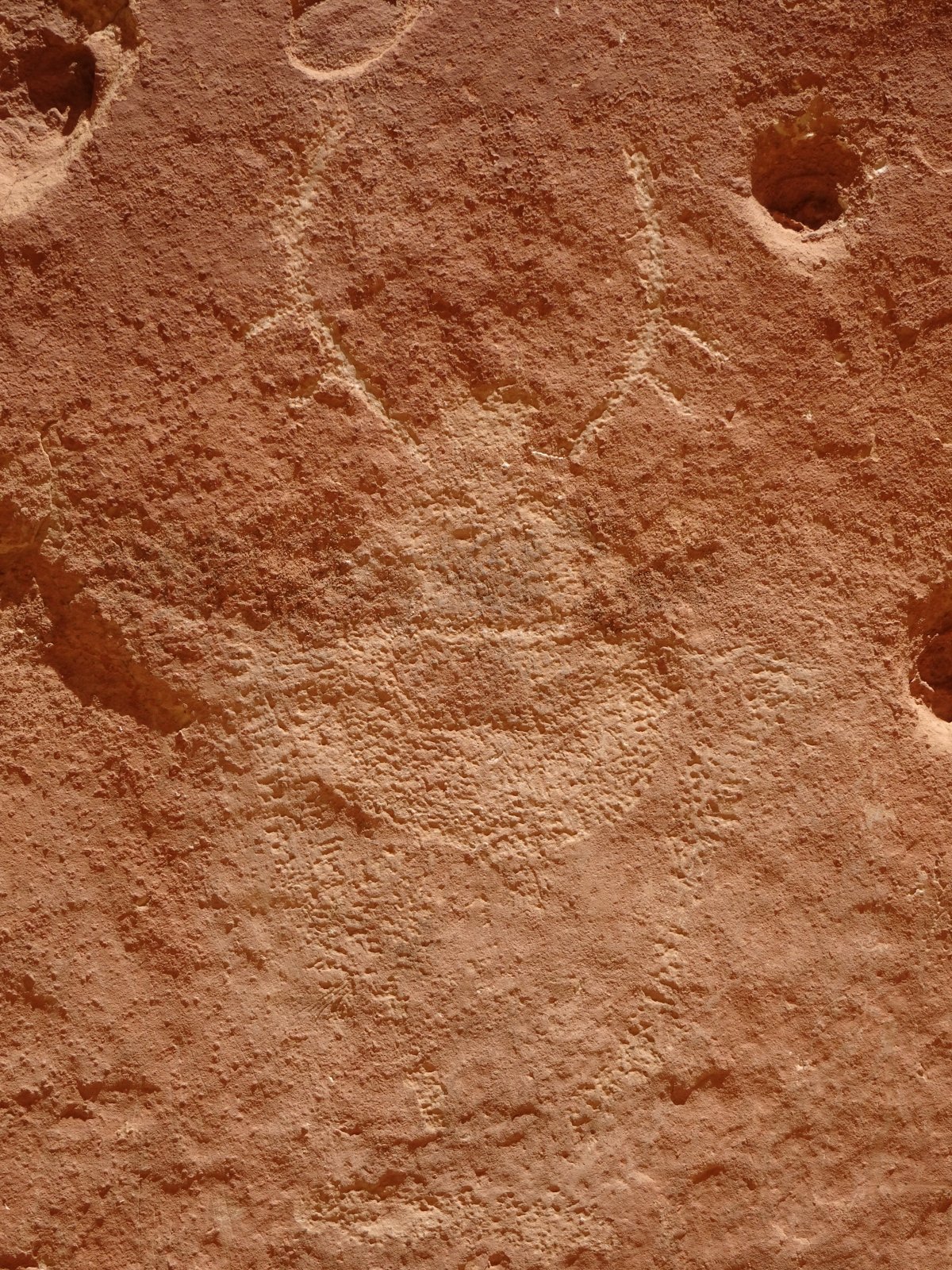 In an attempt to save the day we decided to check out the Fremont petroglyphs just east of the visitor center. As in Capitol Gorge, the rock art was barely visible due to the sun. Strike four. 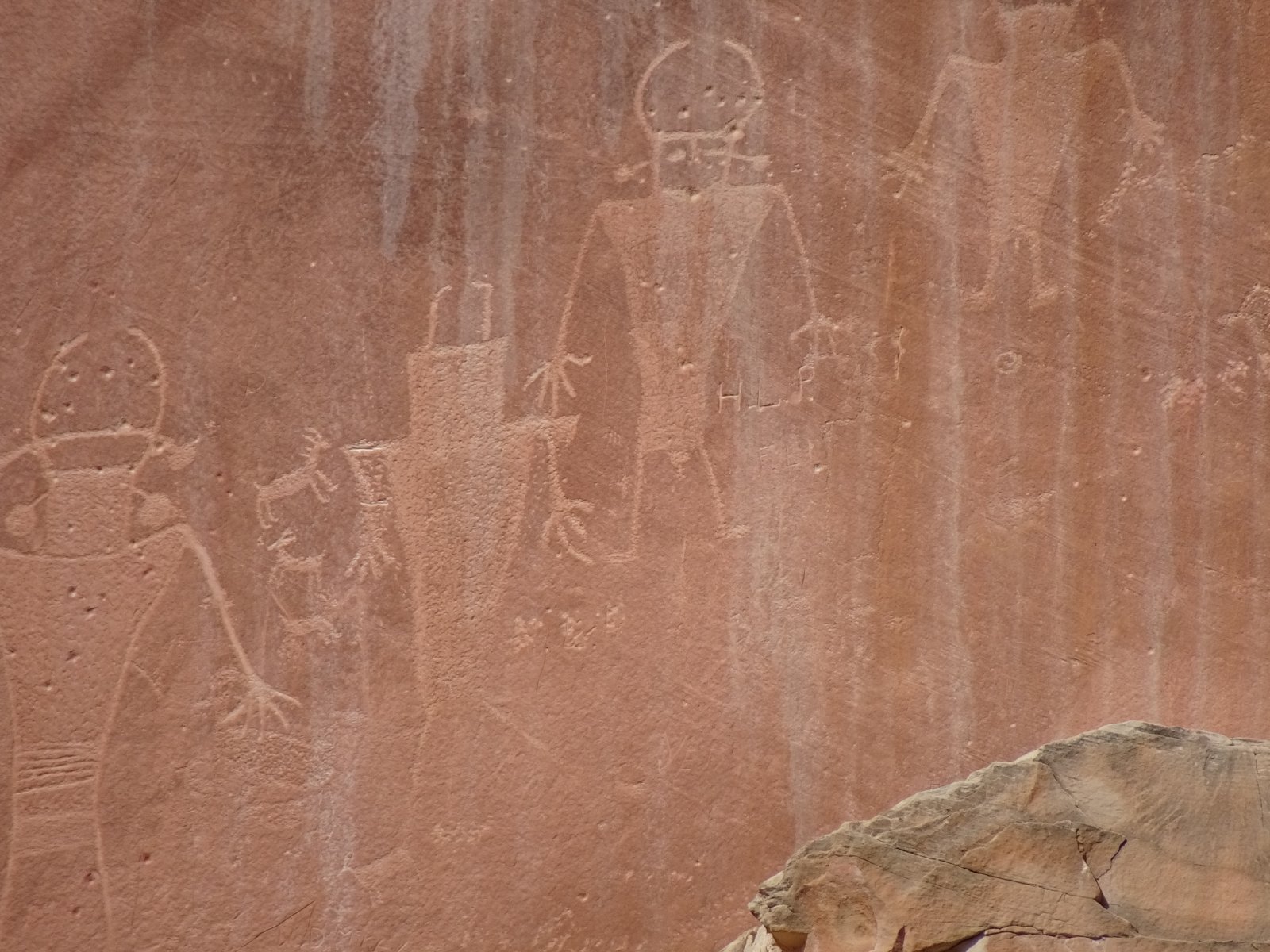 The prior evening we spoke with a local about hiring someone to run a shuttle for us so that we could hike Sulphur Creek. She suggested that we stand at the entrance to the visitor center and ask folks coming out if they were headed to Chimney Rock. Smart woman! On our third attempt we lucked out. A French couple offered to give us a ride even though they weren’t going in that direction. Who ever said that the French are rude snobs that pretend they don’t speak English? We were exceptionally grateful! 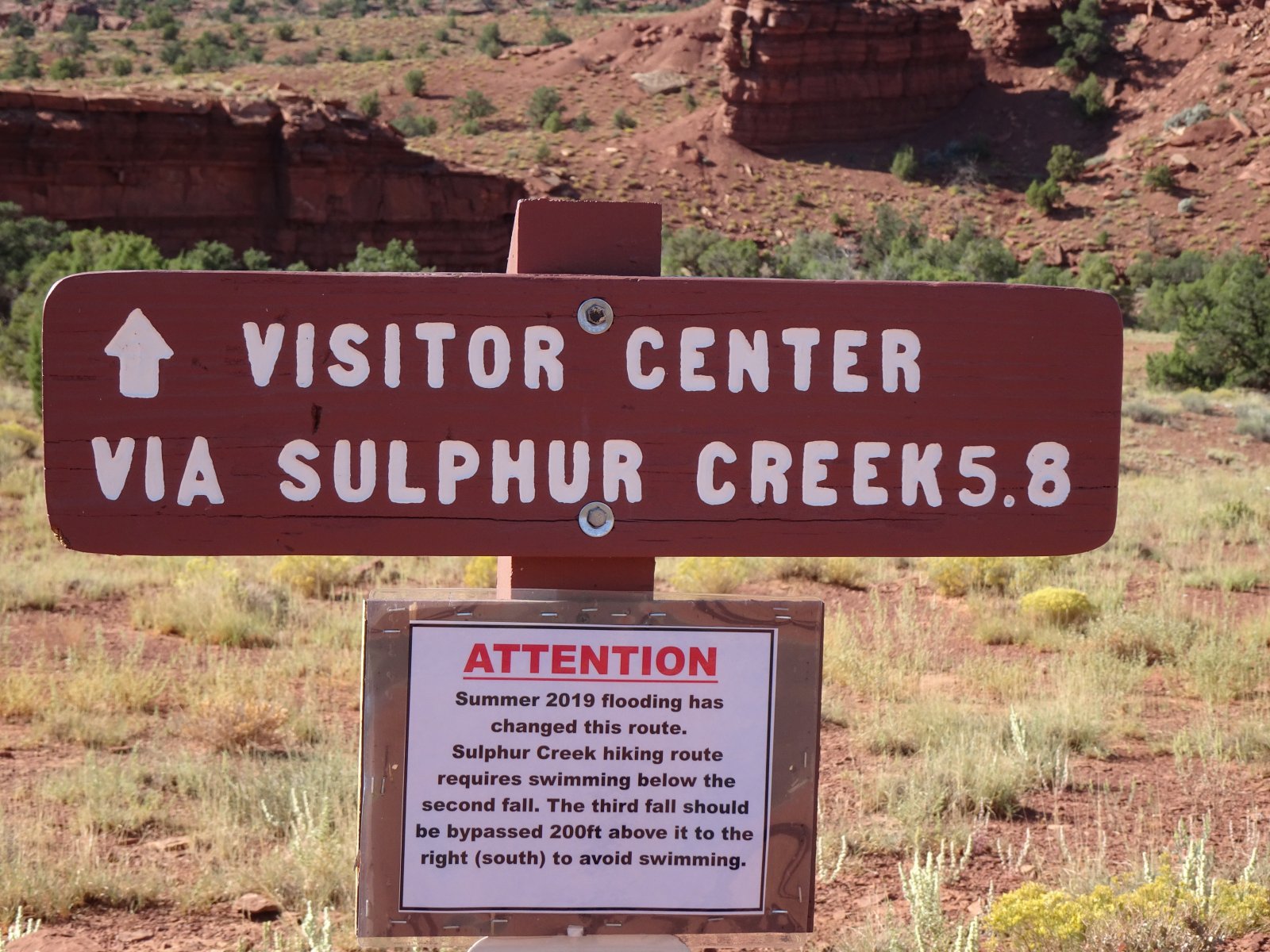 The beginning of the hike was quiet and uneventful until I got this odd feeling that we were being watched. I turned back and was surprised to see coming 'round the bend a fast-approaching herd of……...........

…....…..running Europeans! All clad in identical, blue tank-tops with “Active Adventures” printed on the back. Quite unexpected, to say the least.

In a little less than two miles the dry wash empties into Sulphur Creek, a perennial stream. We’d learned that this year the flow rate was much higher than normal and, in fact, that a flash flood had changed the “course” such that there would be a stretch of mandatory swimming. No effort was made to keep our feet dry as it would be near to impossible to do so and, besides, it was refreshing! 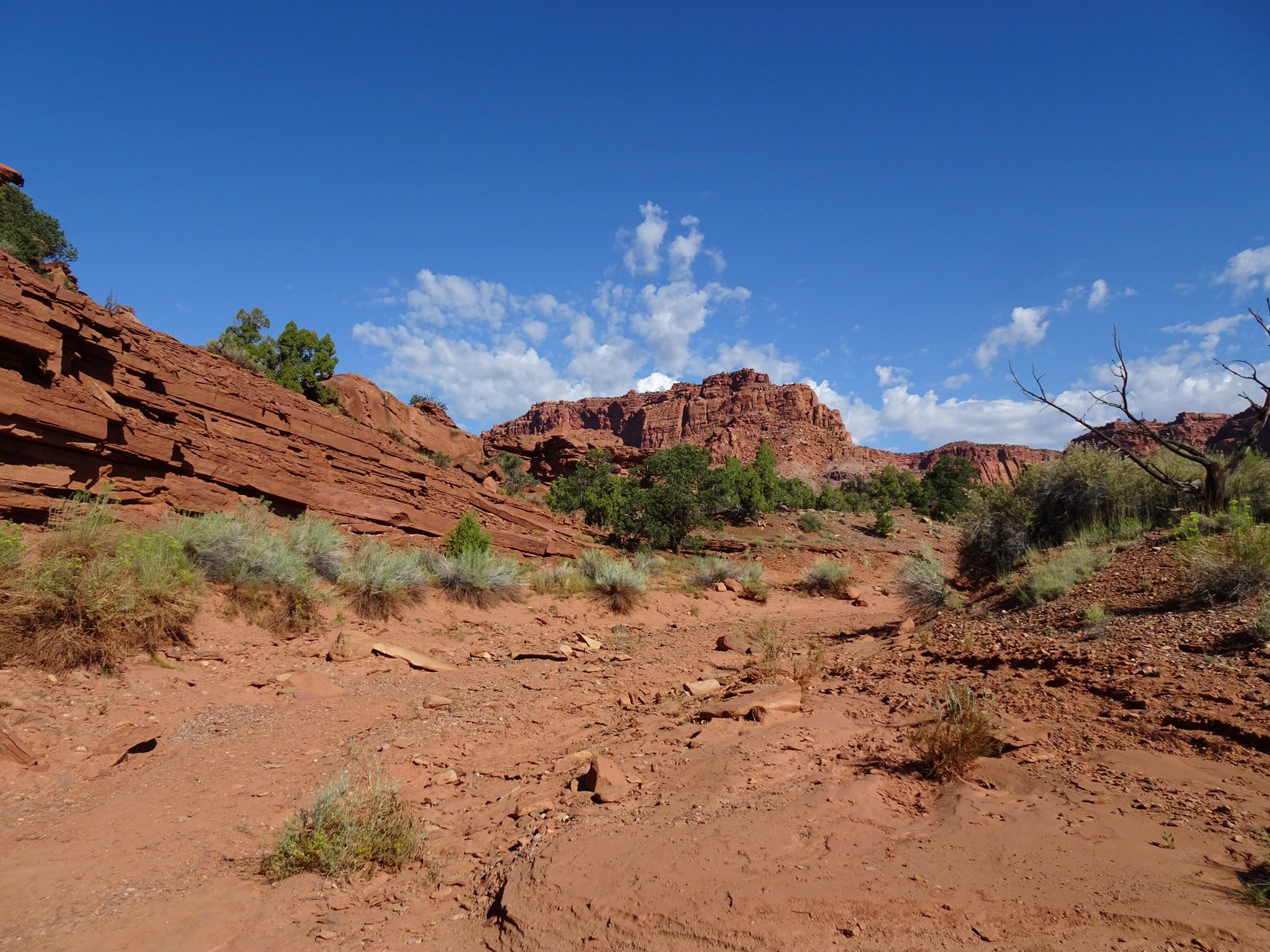 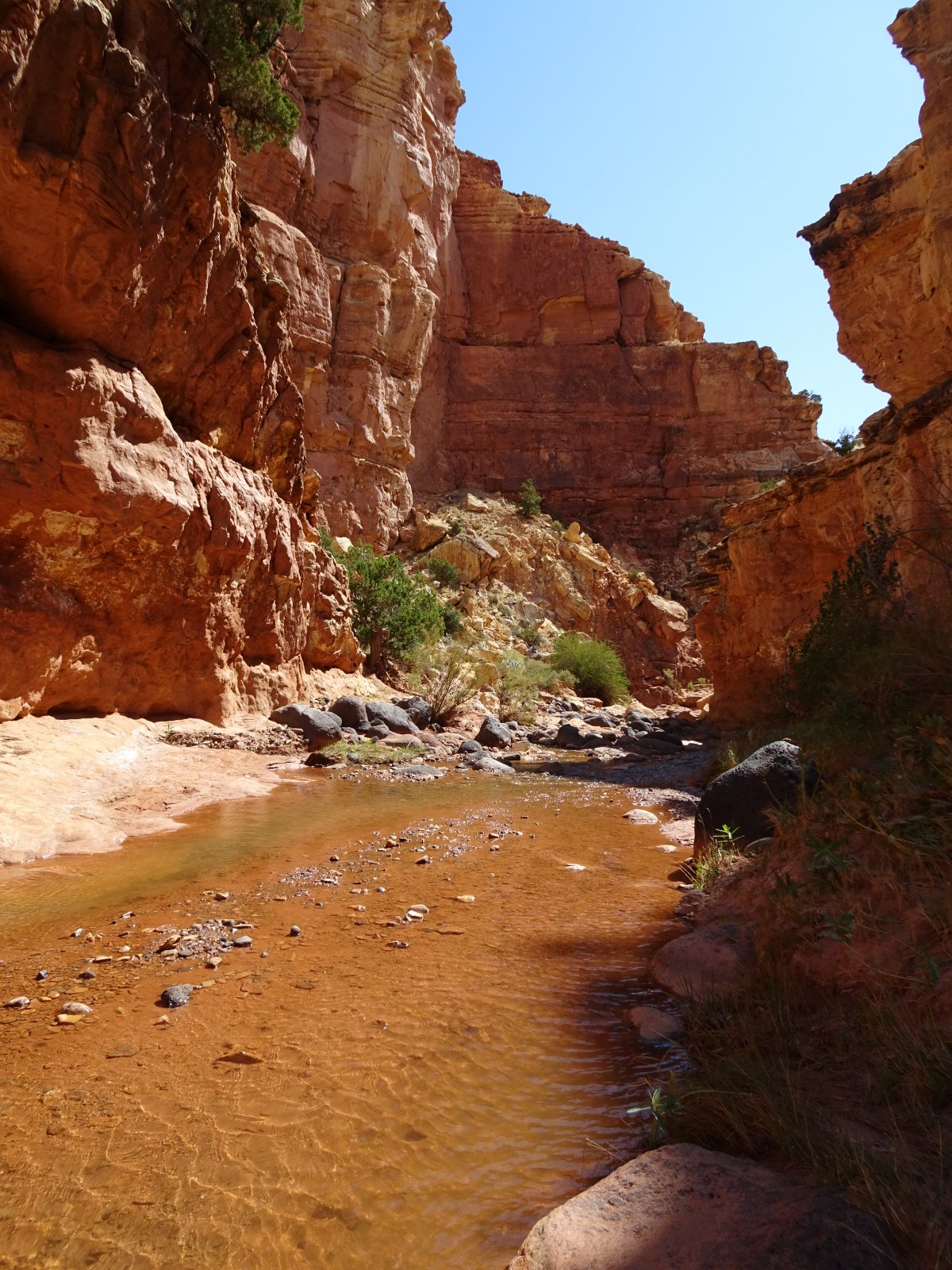 At about the three-mile point, the canyon walls were soaring above us and we could hear the sound of the first waterfall ahead. We’d been advised by a park ranger not to attempt to go down any of the waterfalls we'd encounter and to always, always bypass them on the right (looking down-canyon). The first work-around involved an approximately twenty-five foot traverse of 45-degree angled slickrock, followed by a short, overhanging downclimb. Not too difficult one might think, except that the slickrock was covered in sand which made it was a real challenge to keep from sliding down into the gushing waterfall. Yikes. 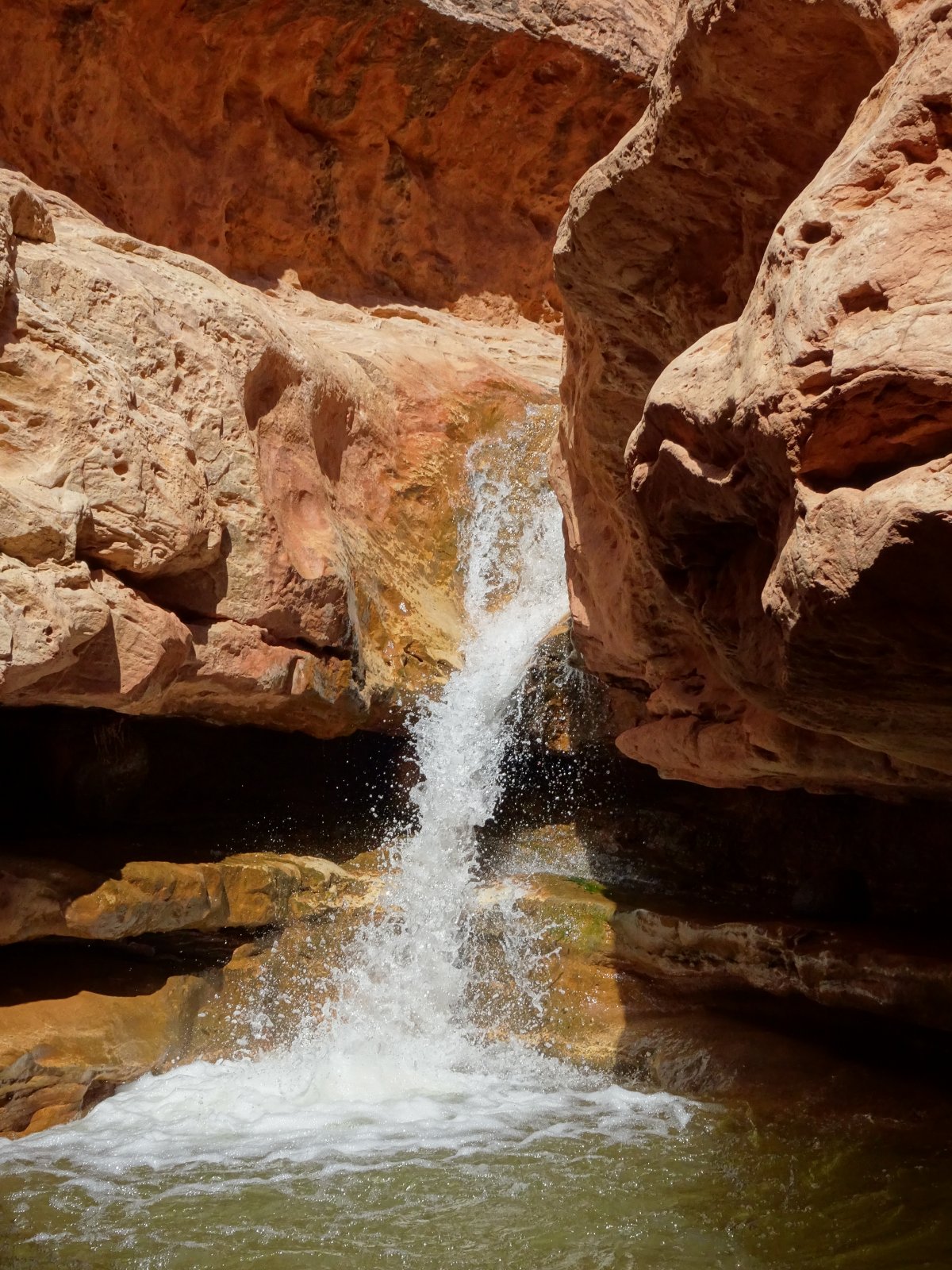 A look back at the work-around : 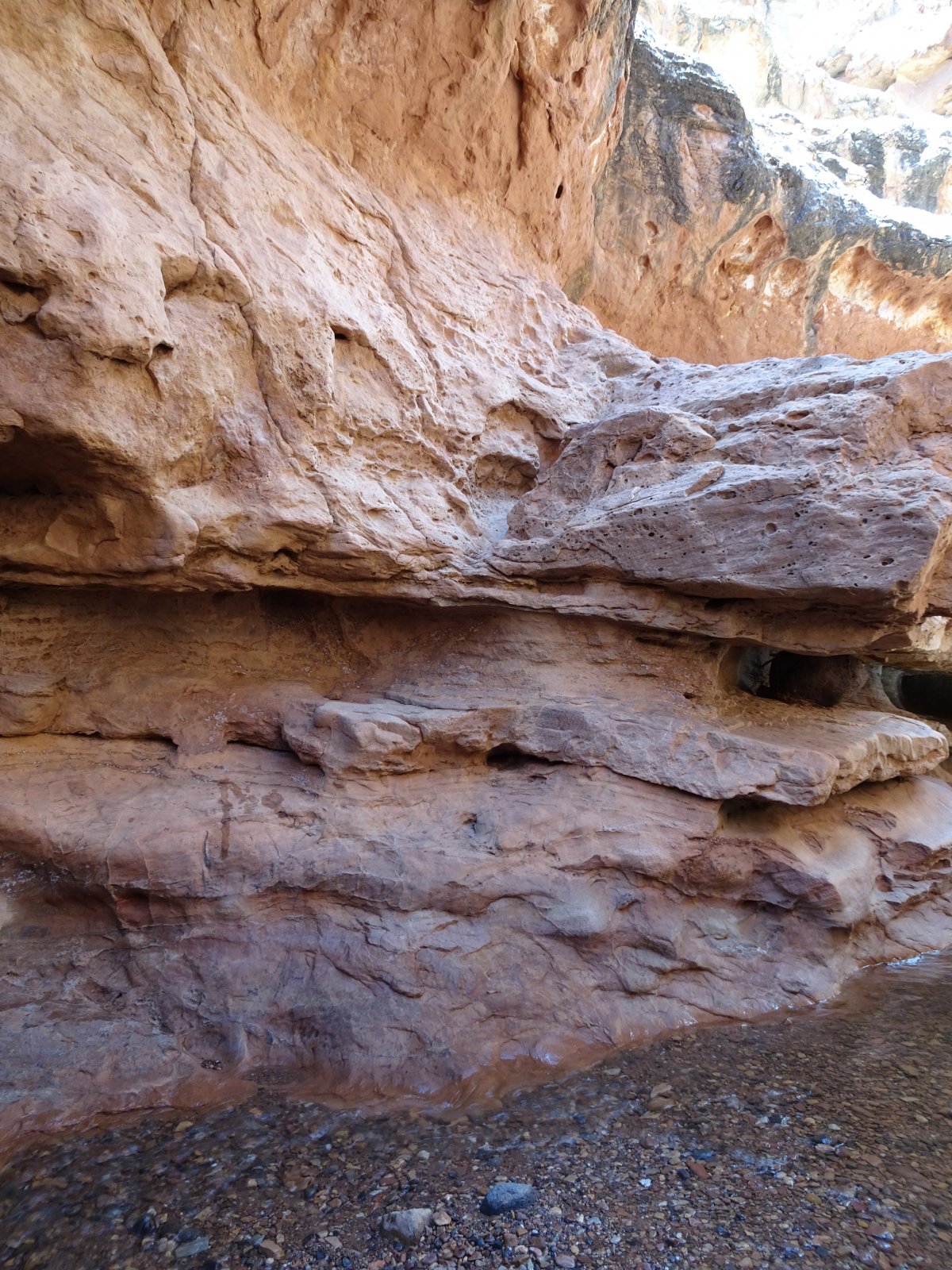 Having successfully negotiated the first waterfall we prepared for the swimming section. We stuffed our packs into large, black garbage bags, being sure to capture as much air inside as possible so that our gear would float along beside us. We waded downstream until it was necessary to swim – a length of about thirty feet. 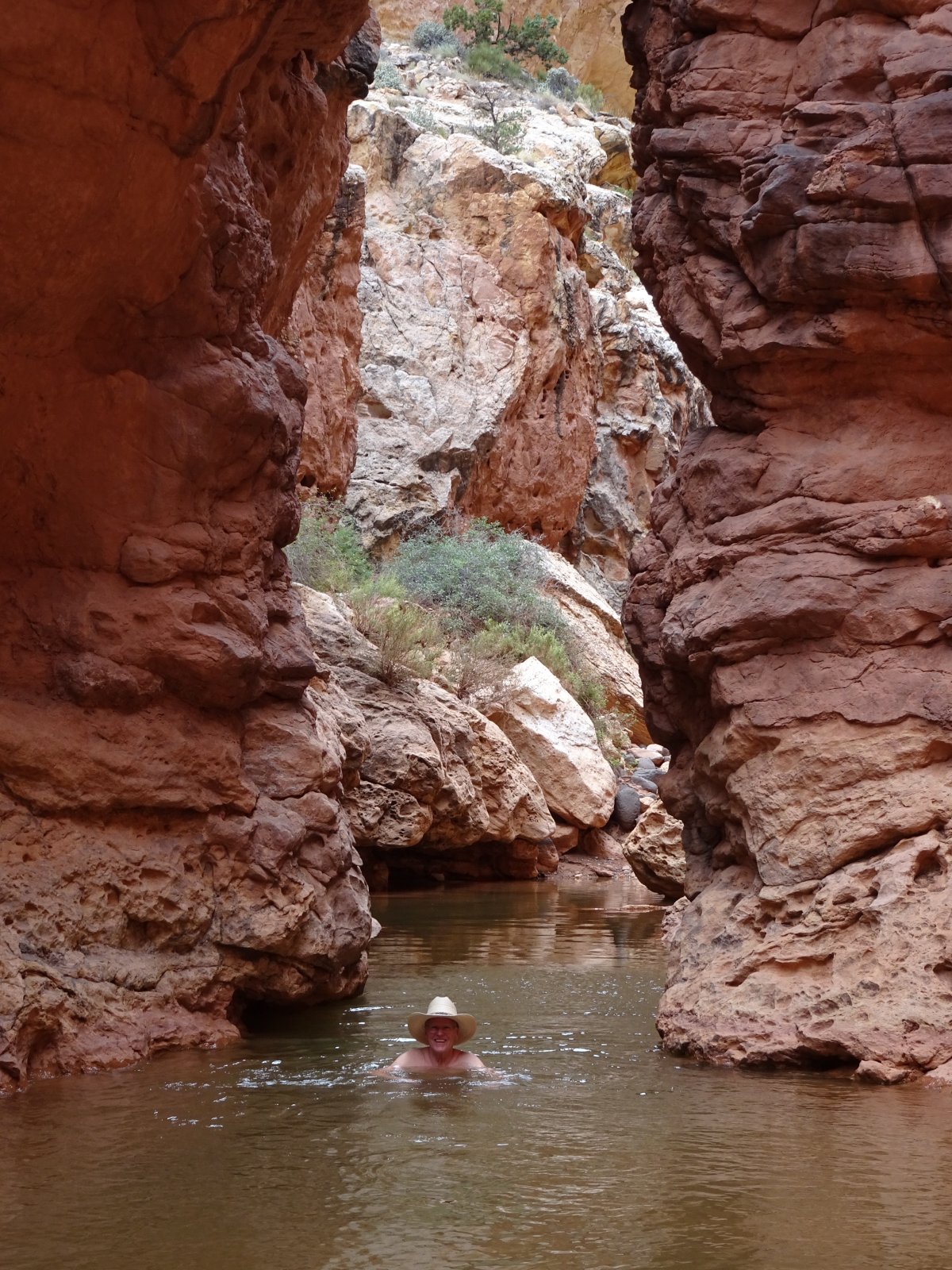 Easy enough and we were soon upon the second waterfall. 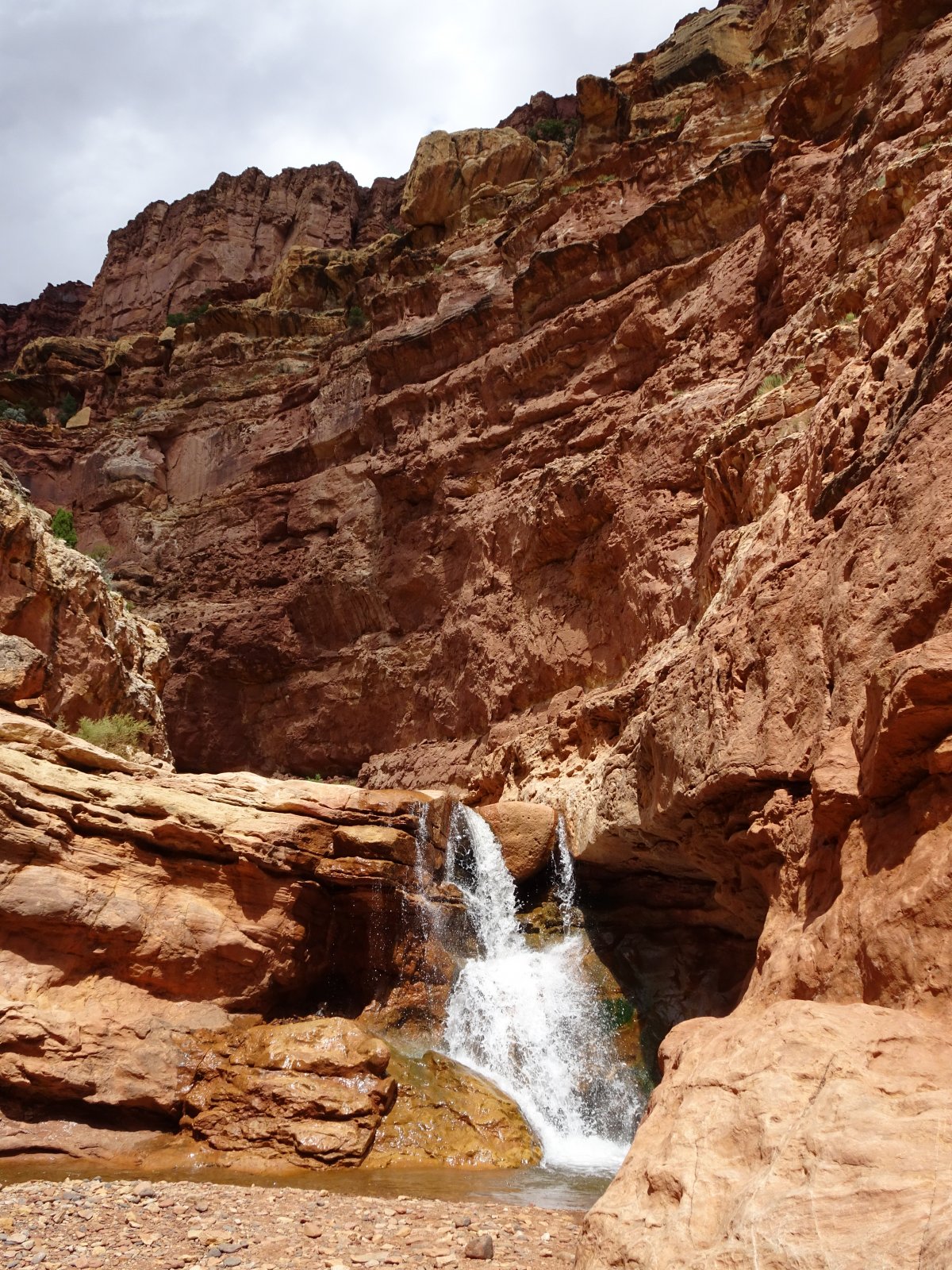 The second work-around forced us to scramble underneath a large, suspended boulder and then down-climb to the canyon floor. The park service brochure says that the second bypass is more difficult than the first, but we disagreed. Probably because there was no chance of slipping like there was with the first.

A look back at the work-around : 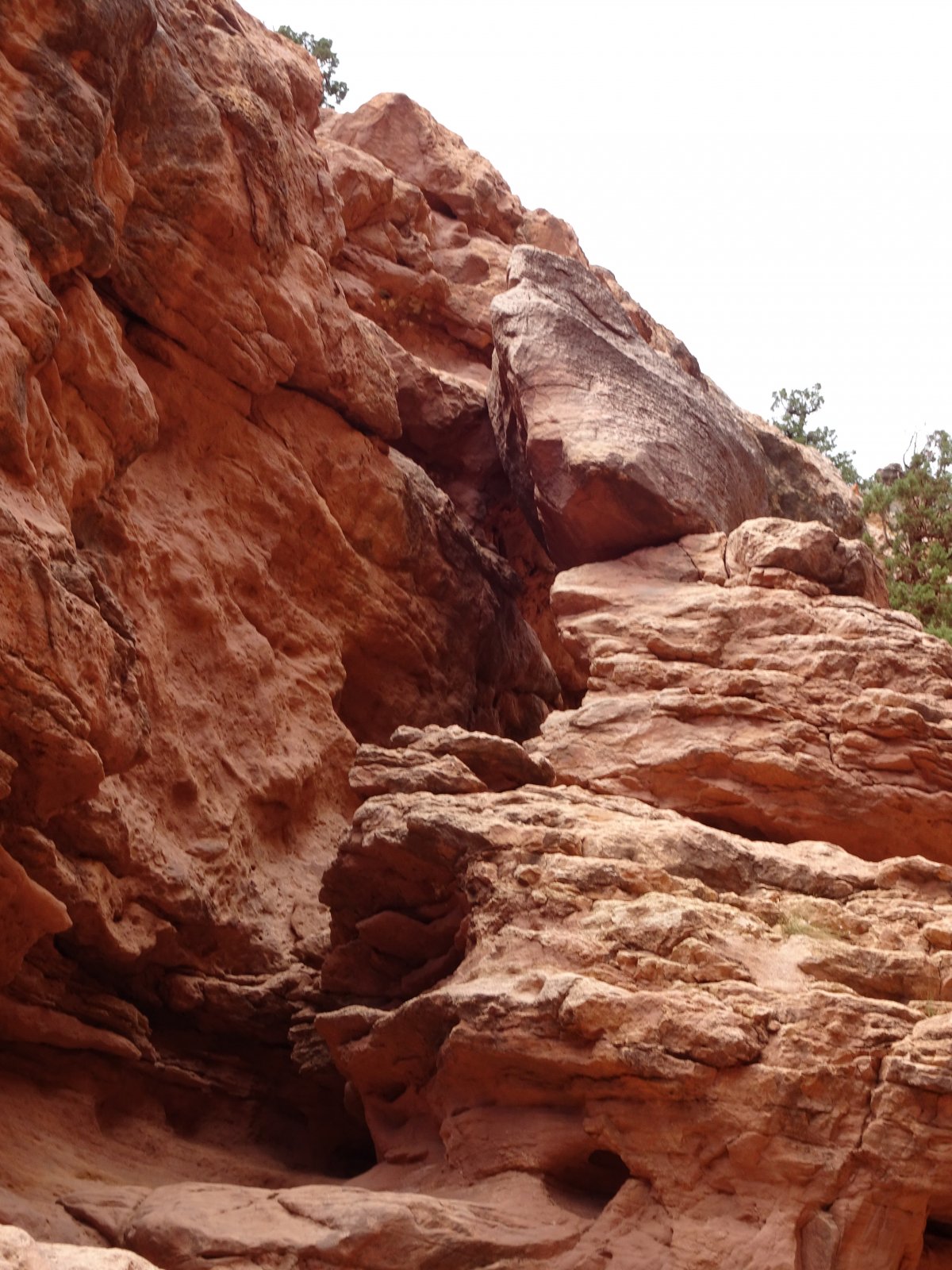 The third and final waterfall is about 1.7 miles further in. While it’s only about eight or so feet tall and it’s tempting to bypass it on the left, we knew that would be extremely slippery and could end up in a recovery incident (as happened a few weeks ago to another hiker). Instead, we went upstream about 20 yards and scrambled up the ledges on the south side of the canyon. Although it was obvious that we’d need to hike down-canyon and we knew we’d eventually make our way back down to the canyon floor, the terrain was greatly sloped and looked rather sketchy from afar. We took great care not to trip and were welcomed at the bottom by a curious doe. She and her bambi were the icing on the cake!

A look back at the sloping hillside (left side of picture) we had to traverse to get back down to the creek : 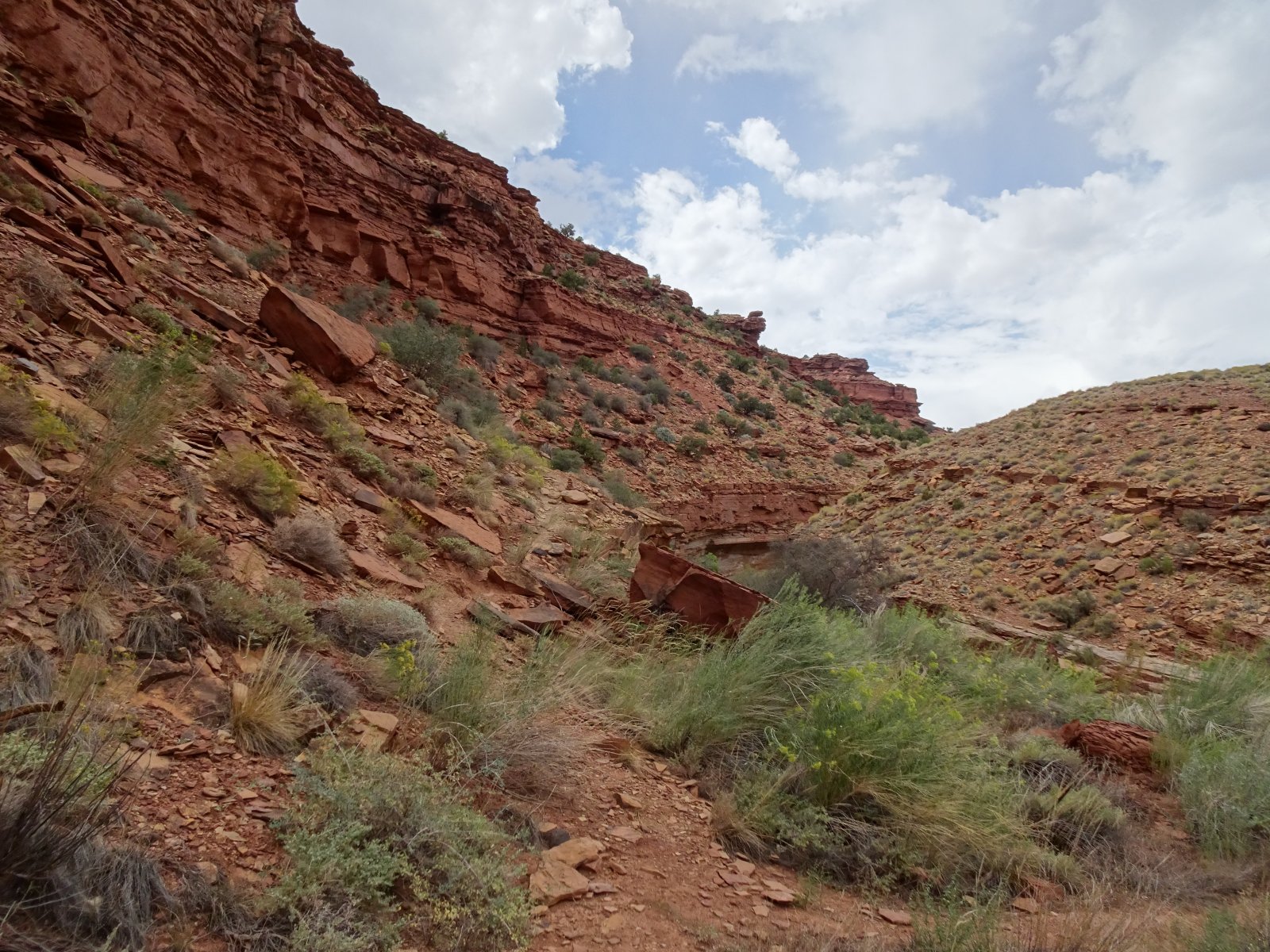 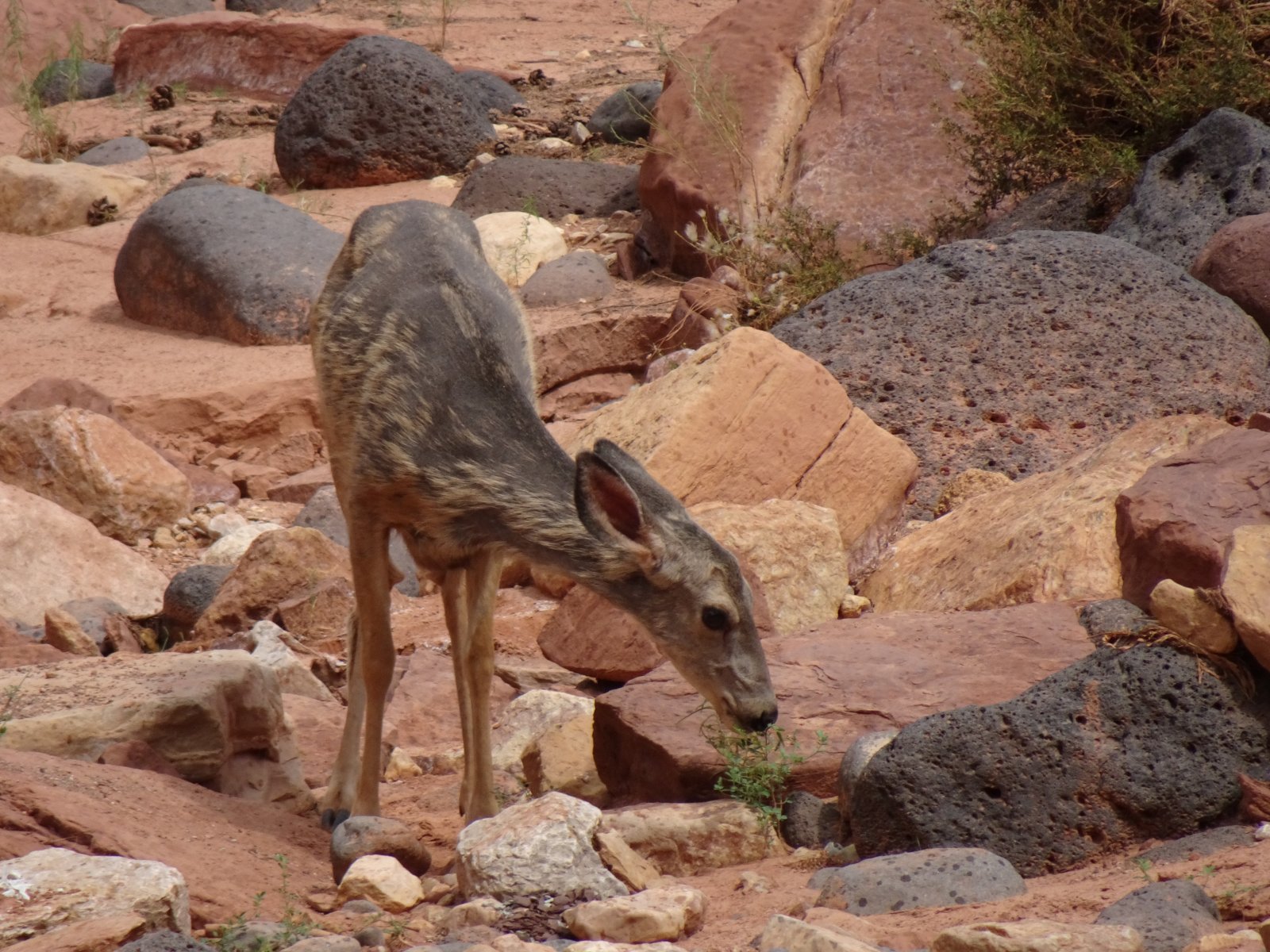 We made our way to the visitor center and were glad to shed our pebble-filled shoes. Blake declared this the best hike he’s ever been on. While I didn’t agree, it was a really fun departure from the hikes we typically go on.

To round out the day we checked out an unusual (at least to us) granary in an alcove near the Fremont river. From the outside it appeared to be made entirely out of somewhat flattened mud balls. Odd. 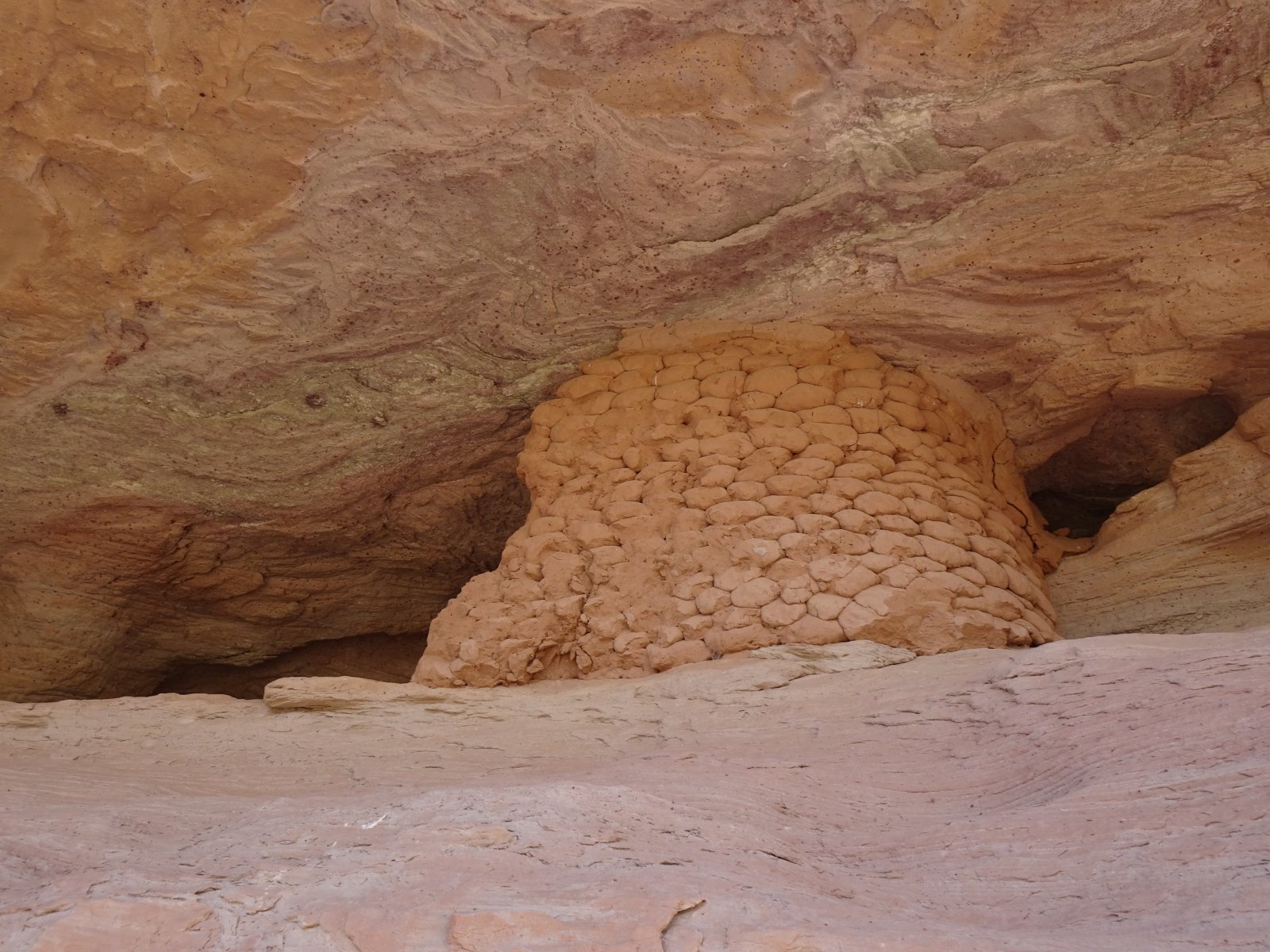 Back to Pleasant Creek we headed. I was determined to see some good rock art on this trip and we weren’t disappointed. The first panel had a lot going on..…Mostly petros, but some pictos high up on the wall. The second panel further down the canyon had at least 3 groupings of interesting squiggly lines that stretched for 10 yards and more. Maps? If so, of what?

Hiking over to the decorated wall : 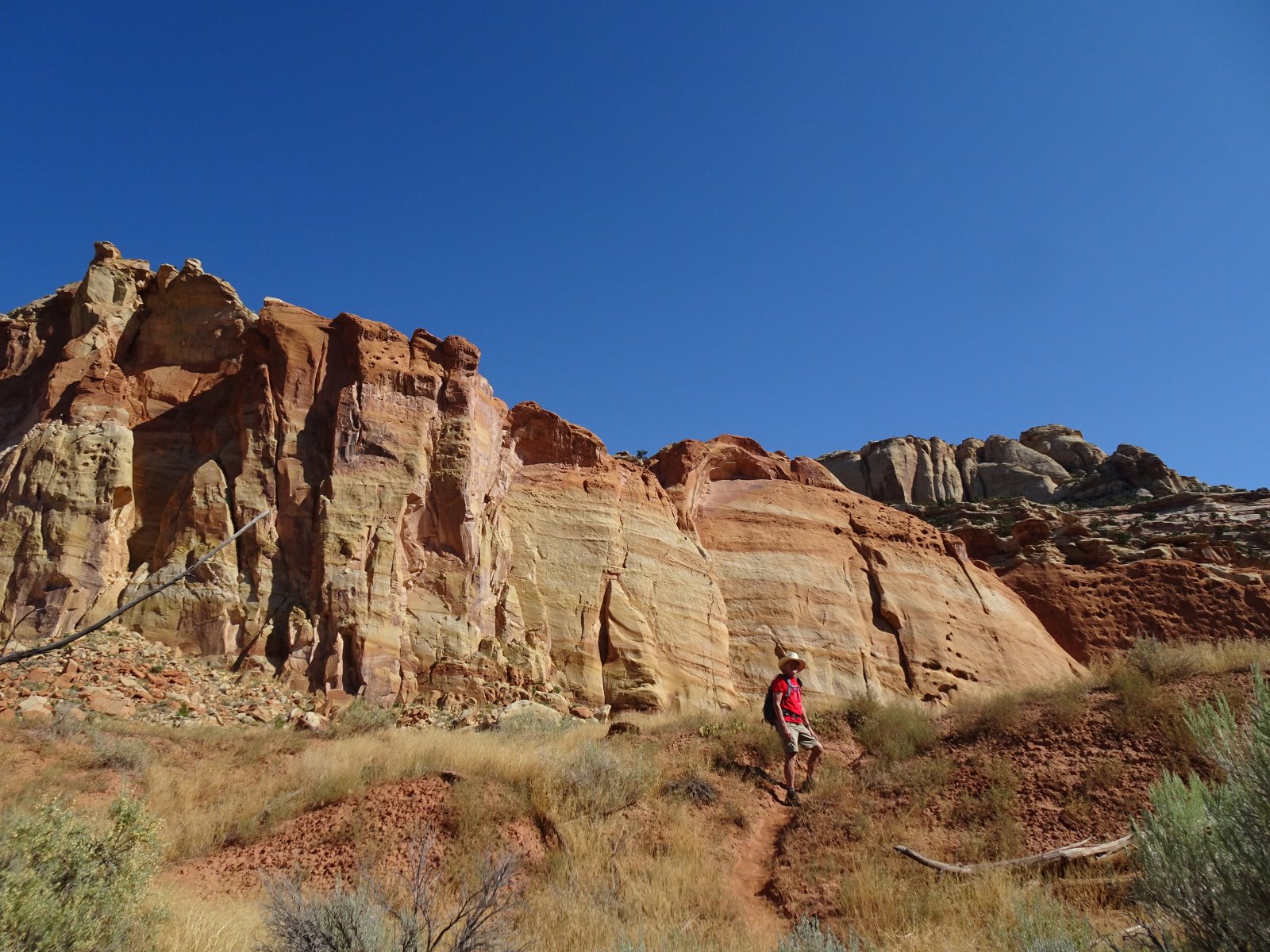 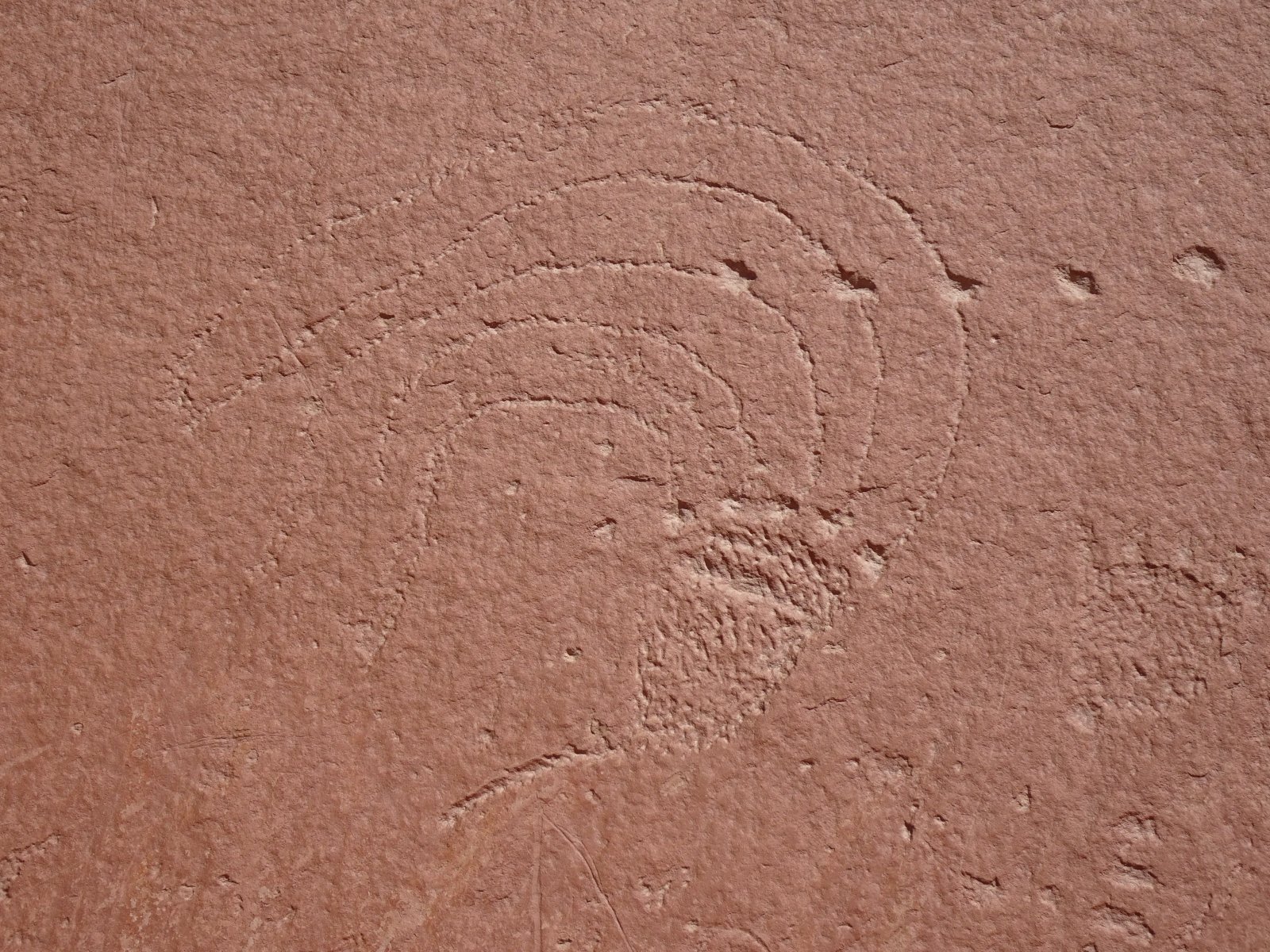 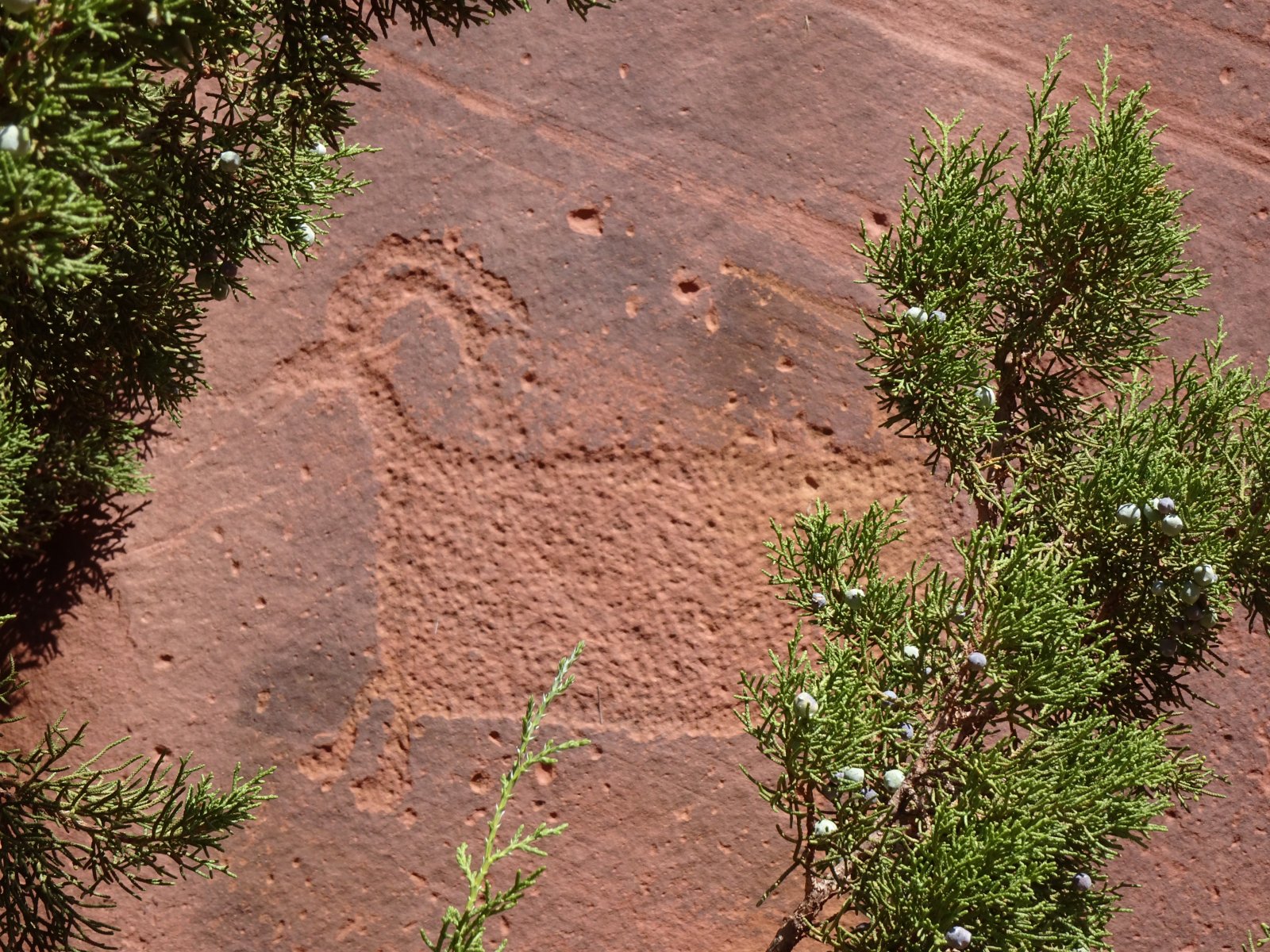 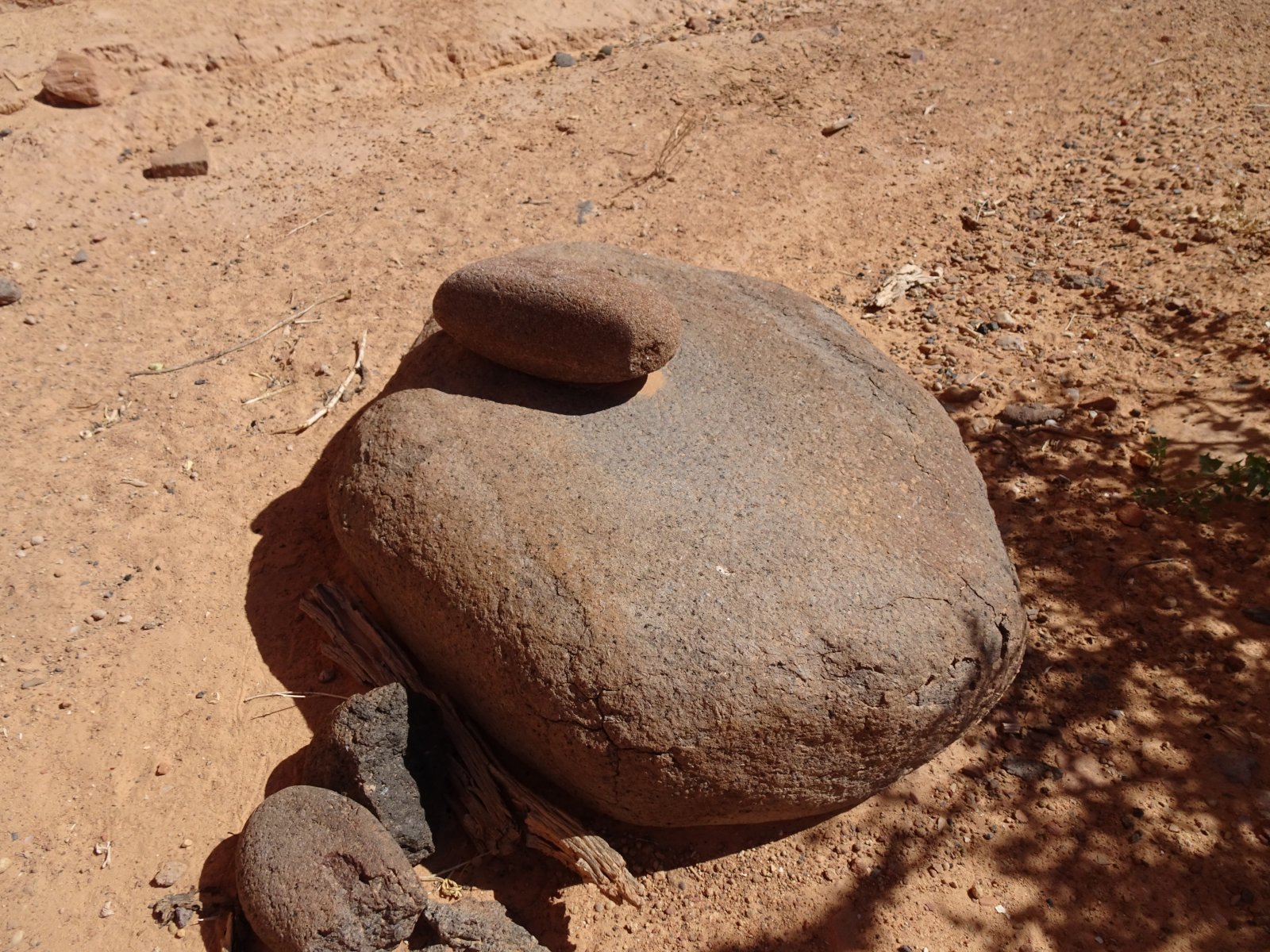 Could this be the forefather of the famous Olathe corn? : 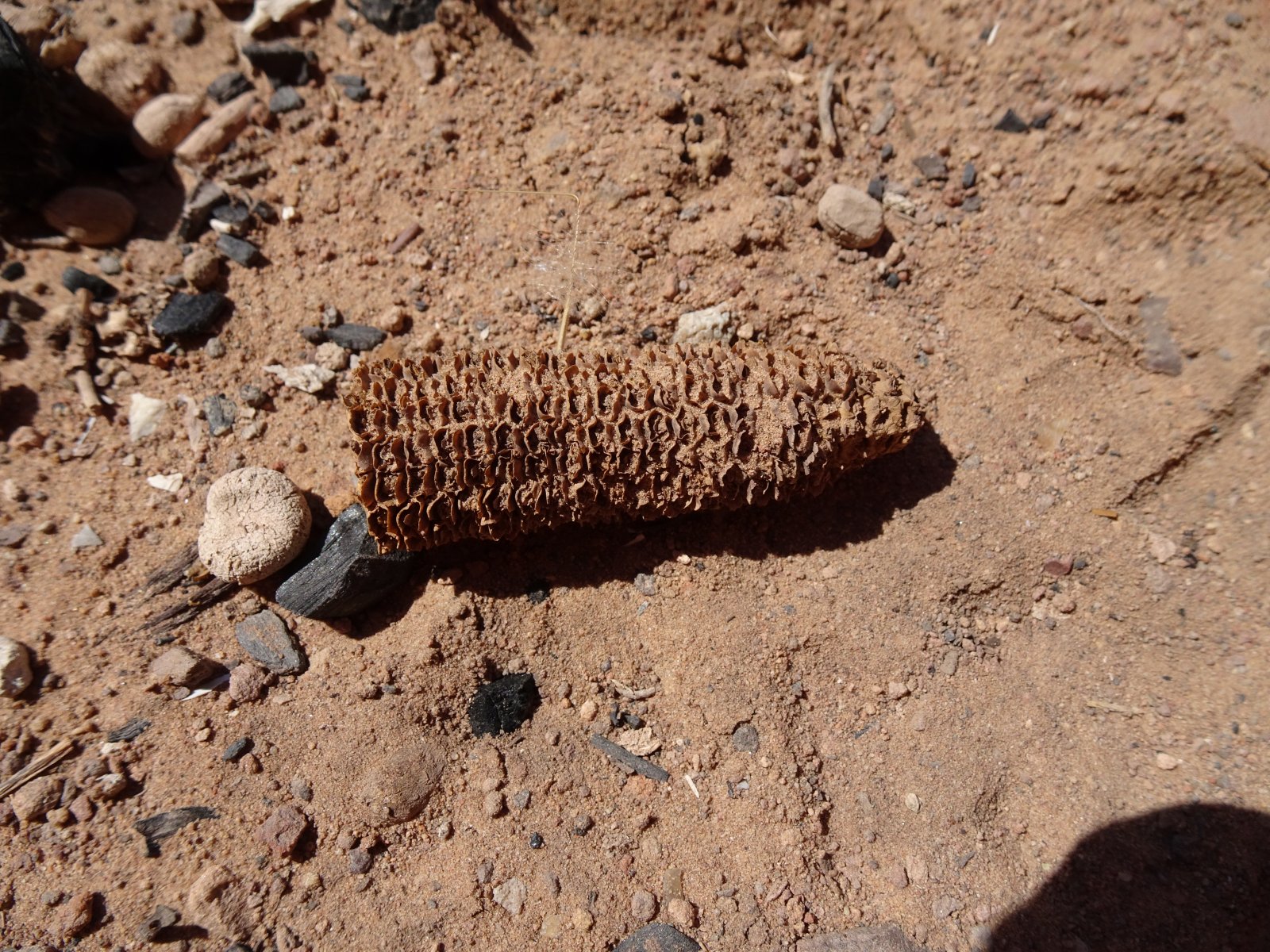 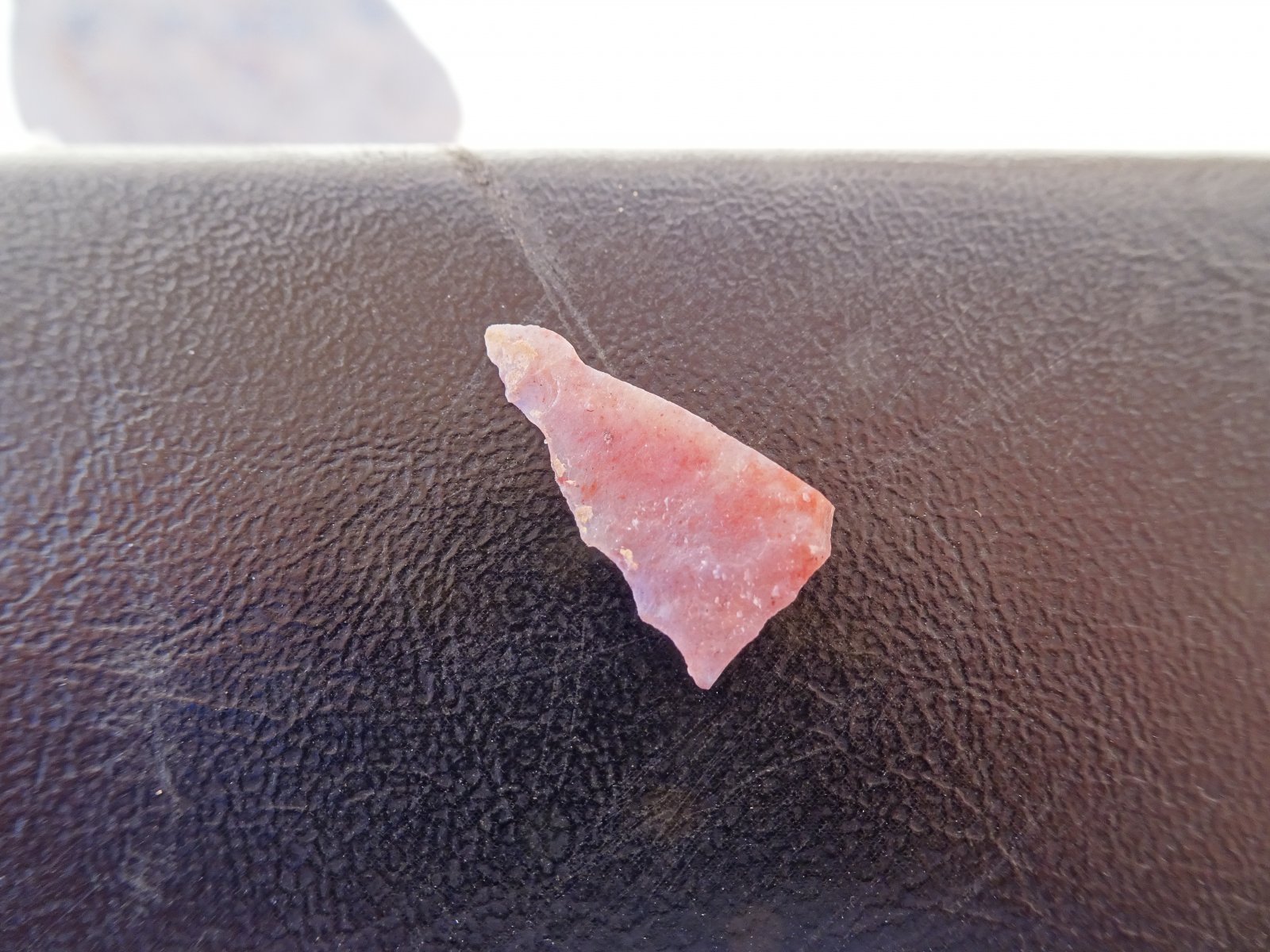 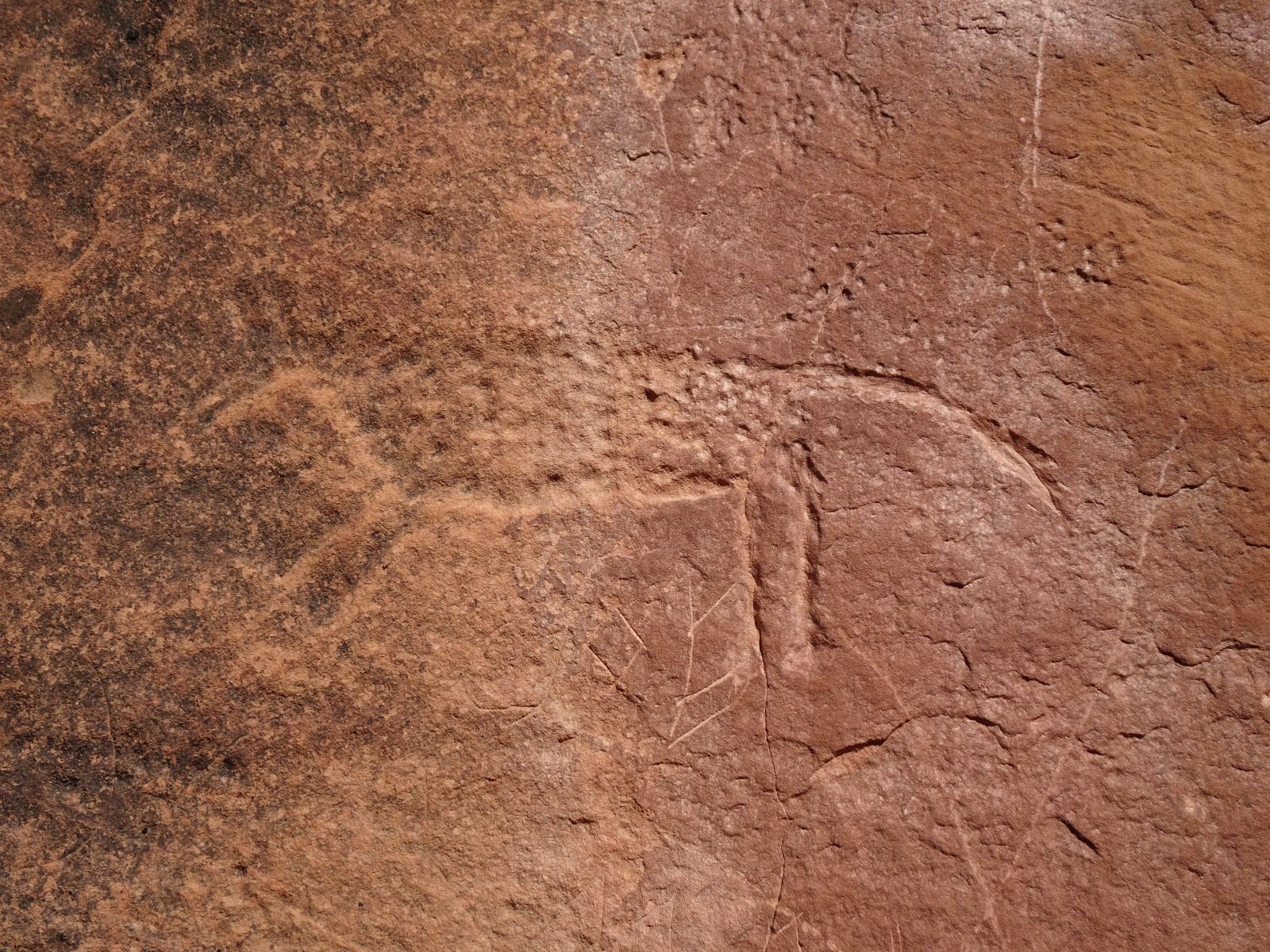 Needing to get home for a social commitment, we headed back the way we came, knowing that there’s more to see further down Pleasant Creek. Another reason to revisit Capitol Reef.

love the swim hole!!! My kind of stuff, I would even just go to the swim hole and enjoy it without going any further
http://yvonnebaurphoto.smugmug.com/

Thanks for sharing Blake's best hike ever! He looks super happy in the water- what did he enjoy the most during the Sulphur creek hike?

It's not the first time I read on BCP that Europeans seem to easier provide a ride to hitchhikers. @Ben mentioned it in one of his reports, they needed a ride back from a Grand Canyon hike and it ended up being Europeans picking them up. I think it is (or used to be) pretty common to hitchhike in Europe, so maybe that's why. I used to hitchhike from Denmark to the Netherlands, ideally trying to get a ride with one of the Dutch truckers. Here is fun little European hitchhike map with estimated waiting times. It looks like the Dutch, Belgians, Danish, Irish, most French and British, German are likely to give you a ride. It's very difficult in southern countries like Spain & Italy and it looks like it's tough around Paris too.

Average waiting time for hitchhikers in Ireland: Less than 30 minutes. In southern Spain: More than 90 minutes.

Titans said:
Thanks for sharing Blake's best hike ever! He looks super happy in the water- what did he enjoy the most during the Sulphur creek hike?

It's not the first time I read on BCP that Europeans seem to easier provide a ride to hitchhikers. @Ben mentioned it in one of his reports, they needed a ride back from a Grand Canyon hike and it ended up being Europeans picking them up. I think it is (or used to be) pretty common to hitchhike in Europe, so maybe that's why. I used to hitchhike from Denmark to the Netherlands, ideally trying to get a ride with one of the Dutch truckers. Here is fun little European hitchhike map with estimated waiting times. It looks like the Dutch, Belgians, Danish, Irish, most French and British, German are likely to give you a ride. It's very difficult in southern countries like Spain & Italy and it looks like it's tough around Paris too.

Average waiting time for hitchhikers in Ireland: Less than 30 minutes. In southern Spain: More than 90 minutes.

Blake liked it all....the mix of terrain, the wading, the swim, the challenge of route-finding to bypass the third fall, the adrenaline-pumping traverse across the first bypass, the fact that we had the place all to ourselves (except for the runners, of course), deer at the end, and probably the fact that his "floating garbage bag" idea worked.

Cool map, by the way. I hitched quite a lot the summer I spent in Greece and I remember being given lifts all the time as a kid in WVa (even though we weren't sticking out our thumb). The world has changed...

That swimming stretch was there a few years back also. I can't remember which year at the moment. Last time I was there there was precious little water in the creek so it was almost a boring hike. Especially for my kiddos who had heard about dad and grandpa swimming in the creek.

Canyon country looks amazing
-----
My favorite part about mornings is greeting every spider that traveled across the trail that night, with my face.
Check out my Video Trip Reports and Timelapse videos!

I'm glad Pleasant Creek worked out for you. And I'd heard of the recent changes in Sulphur Creek, but wow, that's the first time I'd seen pics showing them off with the new swimmer. That'll probably scare a lot of crowds off, but also attract some others now. Now i'm keen to see what that third/lower falls looks like from back and below because down-climbing or up-climbing it around its east side was always the way to go which often required a waste-high wade anyway.
You must log in or register to reply here.
Similar threads