The Birdwood Circuit in the Kananaskis region west of Calgary-a loop connecting the Burstall and Commonwealth valleys via Birdwood and Smuts passes, is in my opinion one of the finest ski tours in Alberta. It's also a great hike, although with some bush, rough or non-existent trails, scree, and braided creek crossings- travel around the loop is way easier in spring ski season. We lucked out and had a pretty much perfect day. Sure- the ski descents could have had more ego powder, but the weather, scenery, and a bonus wildlife encounter more than made up for that. 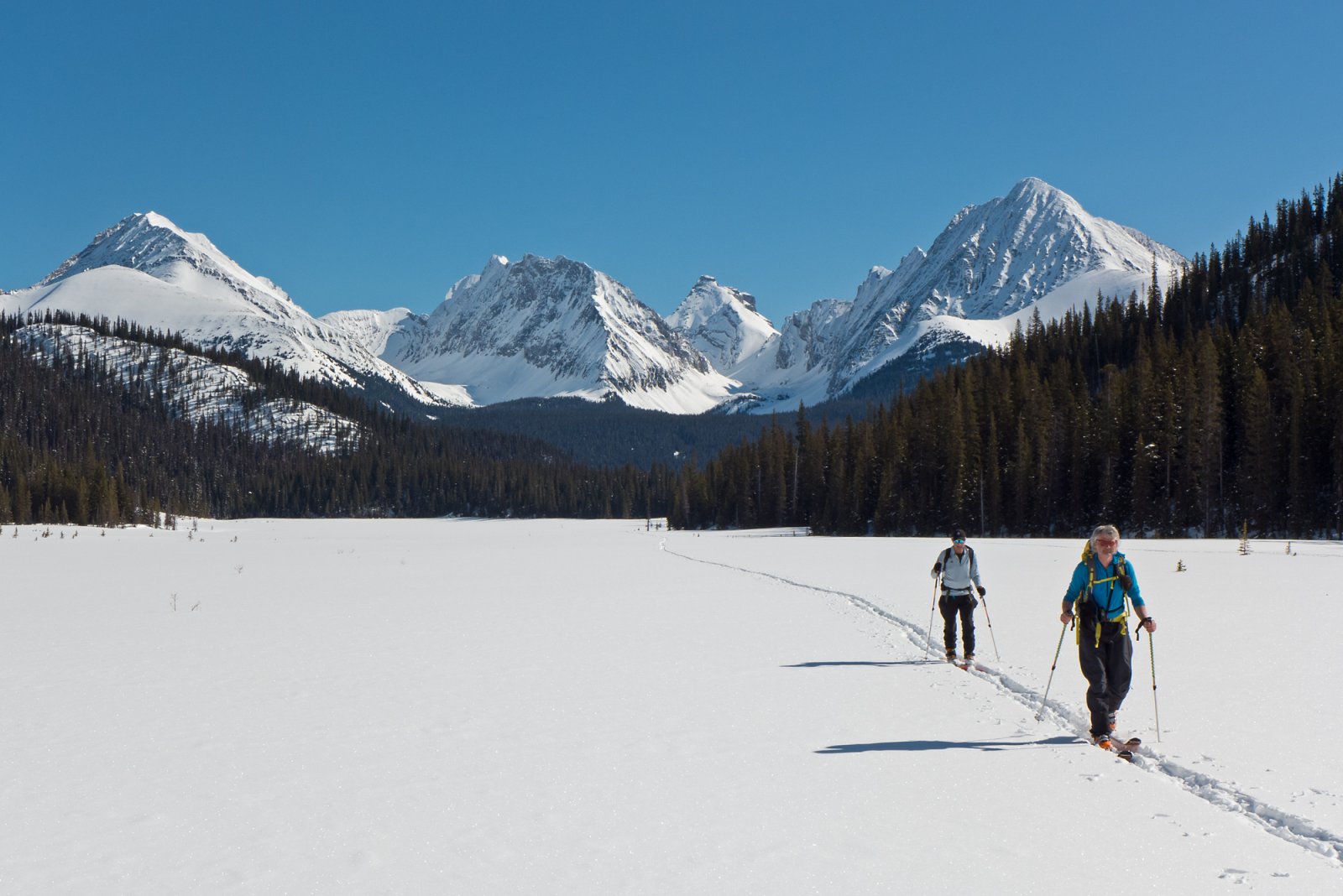 Crossing the Burstall flats with Dave and Bob on a perfect morning, after several km along an undulating old logging road. It was -10 at the trailhead, but already warm out here in the sun. 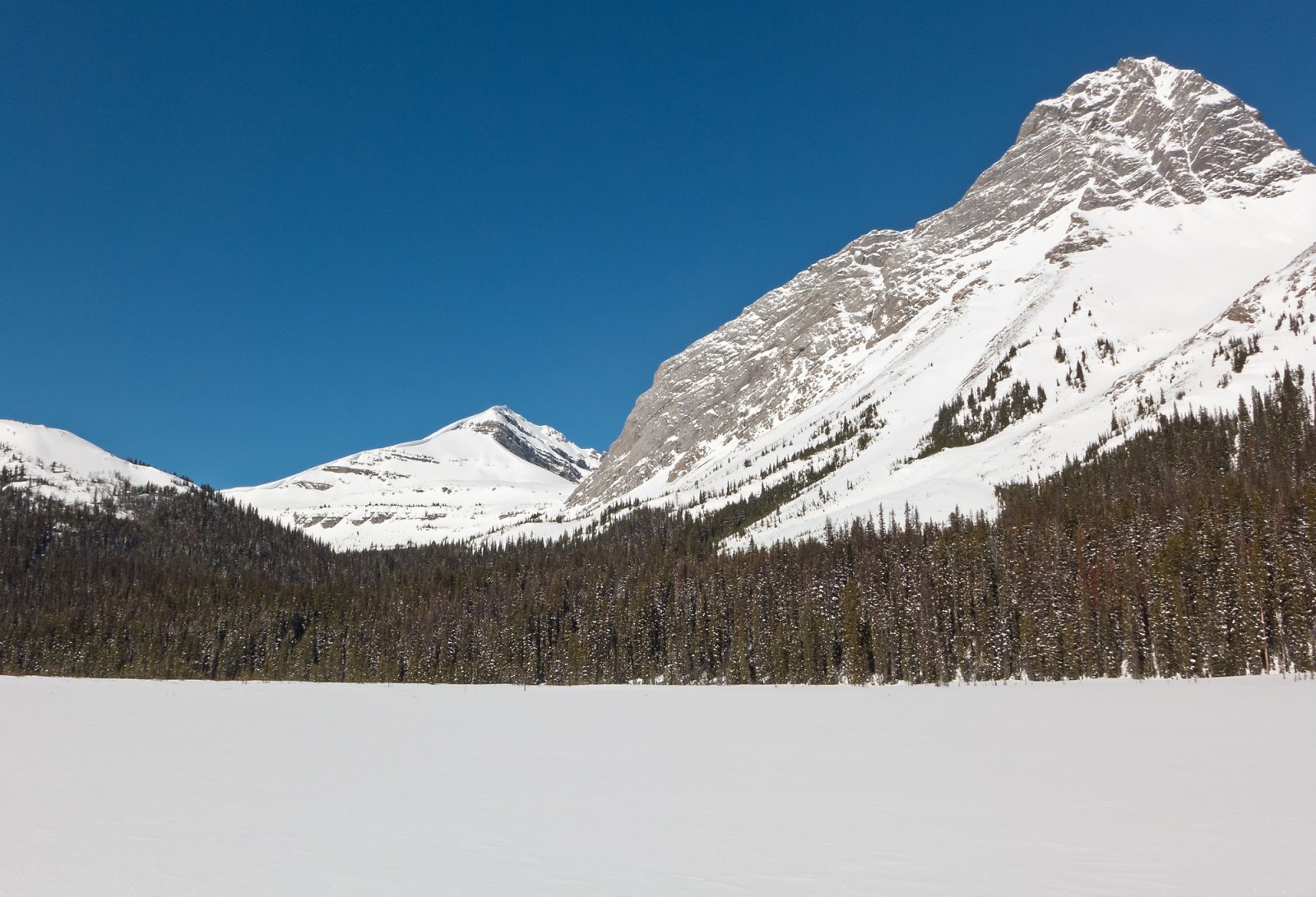 A look ahead to the Birdwood Pass area above the forested headwall, hidden from view between Snow Peak and the ridge of Mount Birdwood. 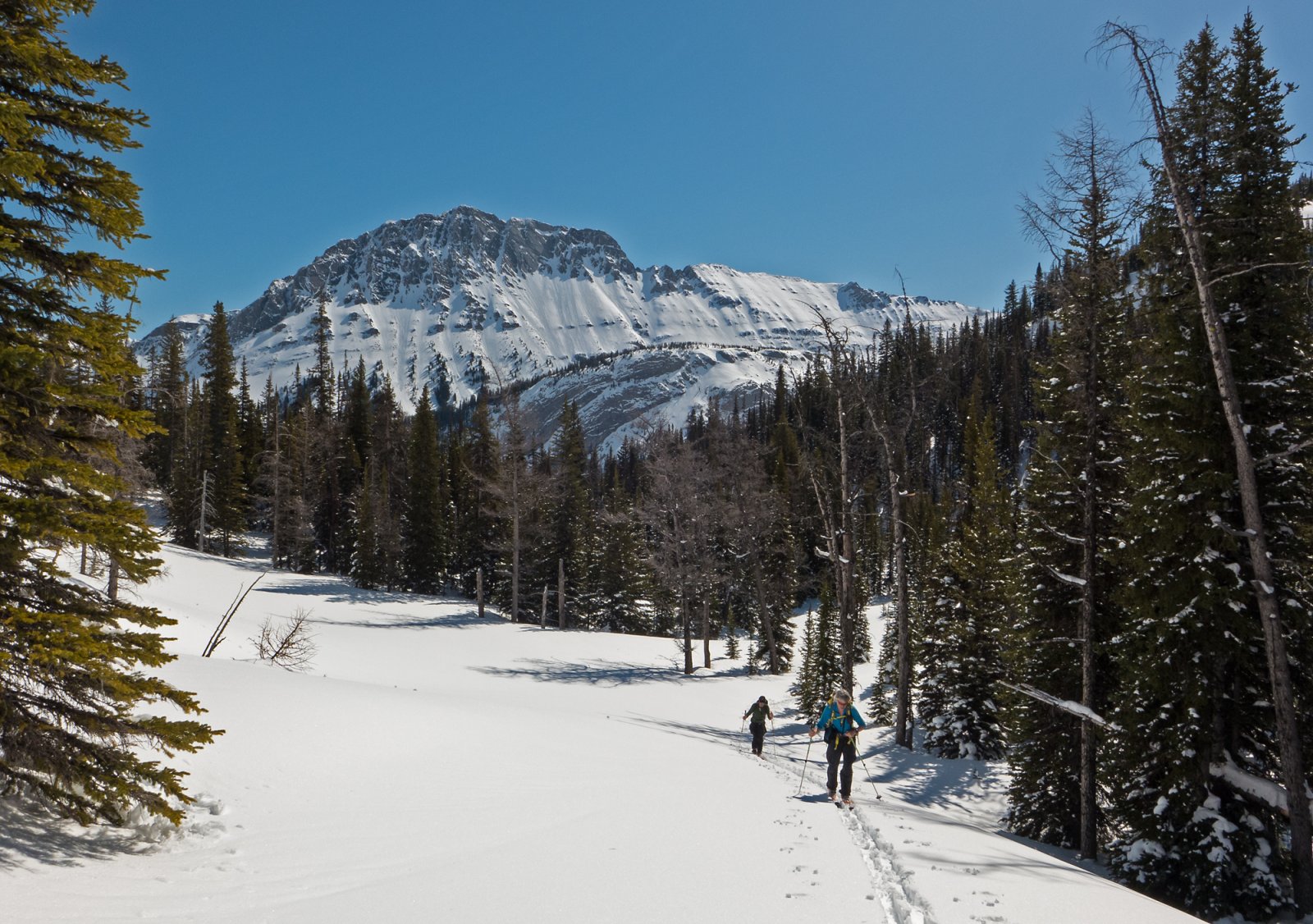 Easy trail-breaking after turning right and leaving the Burstall trail behind. 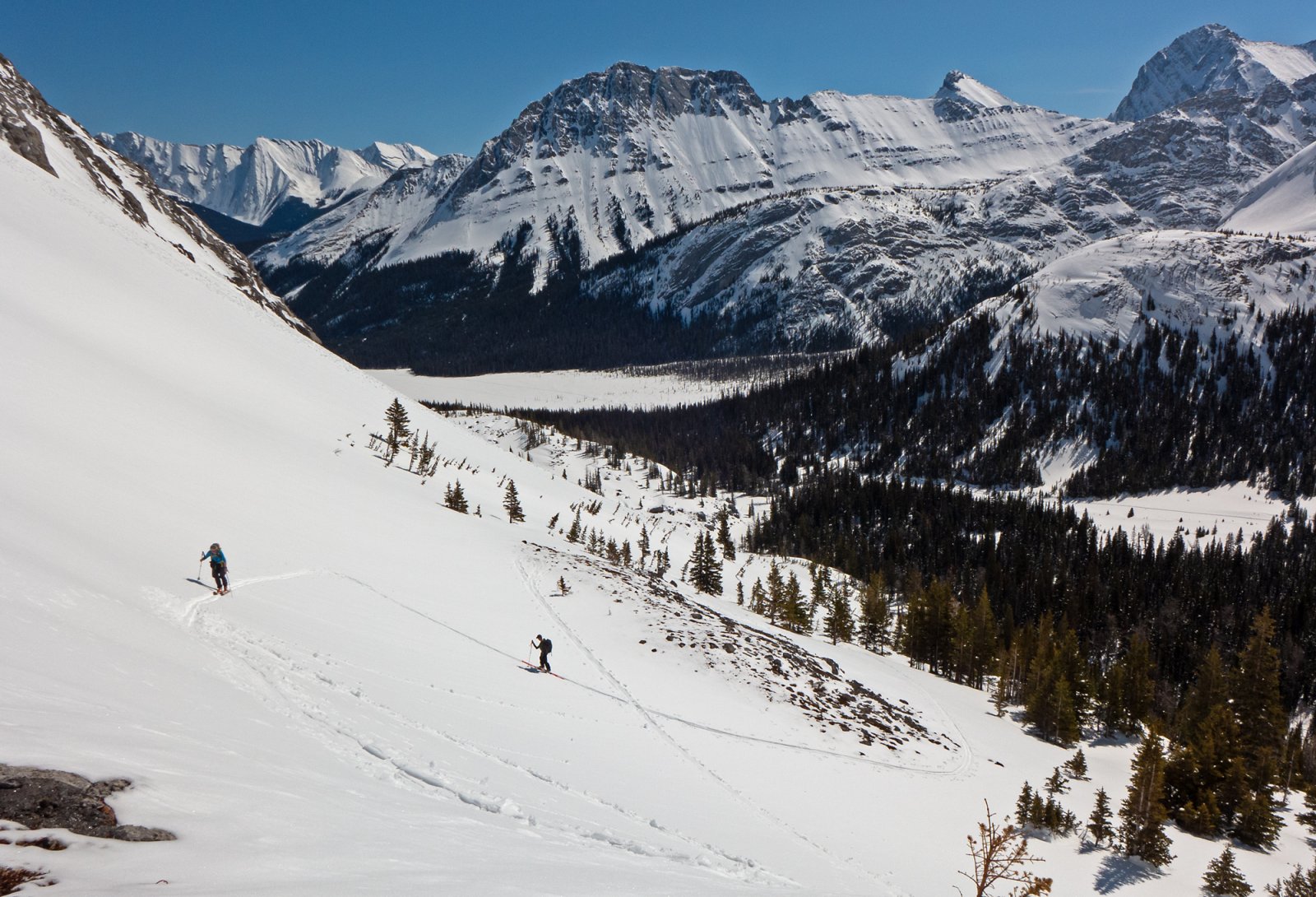 Negotiating the moderately steep avalanche slopes that are the crux of the tour. No problems on this morning, as the recent storm snow has settled and bonded well to the underlying well frozen crust. 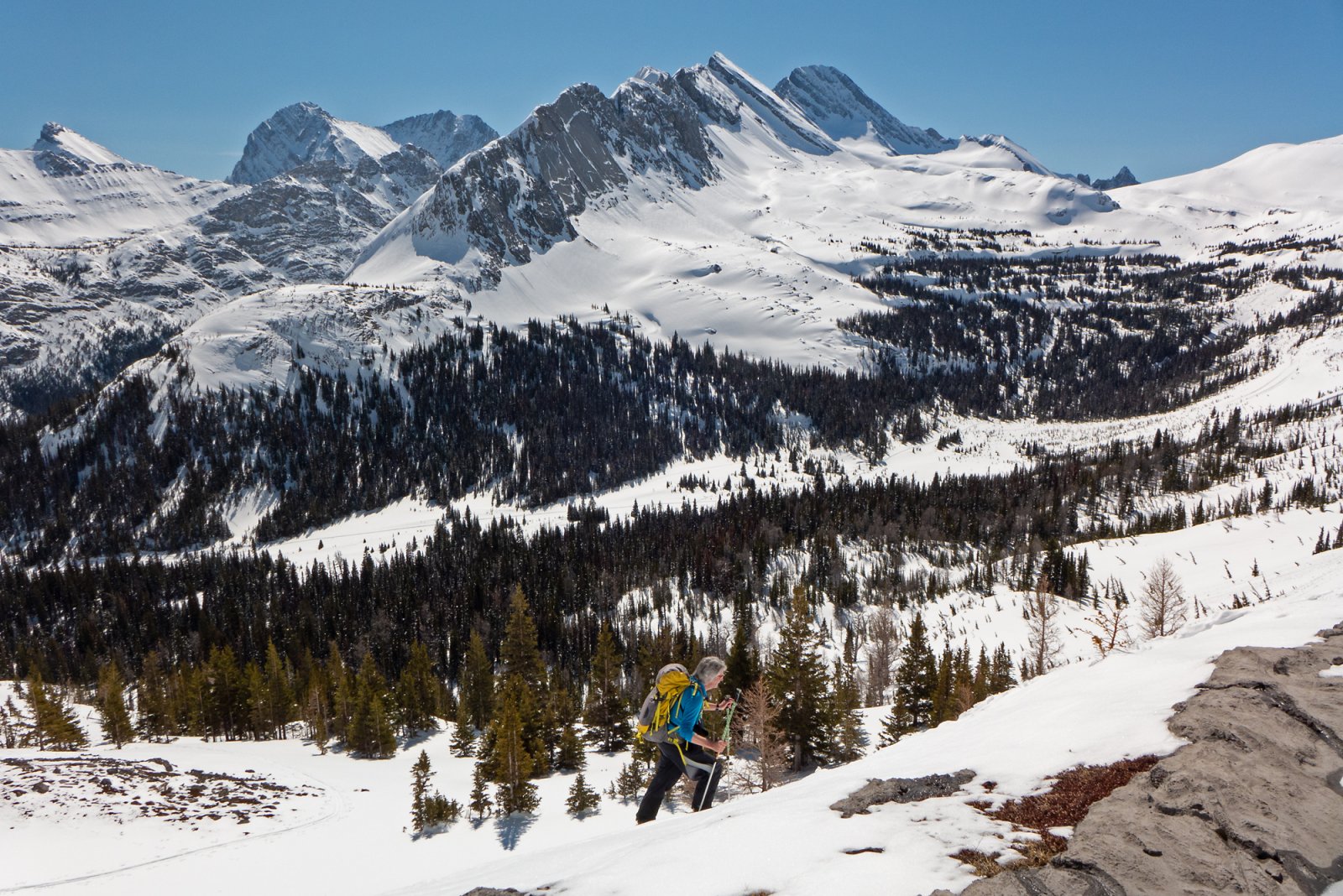 Enough snow to skin up the little rock band section. Time to relax and enjoy the views! 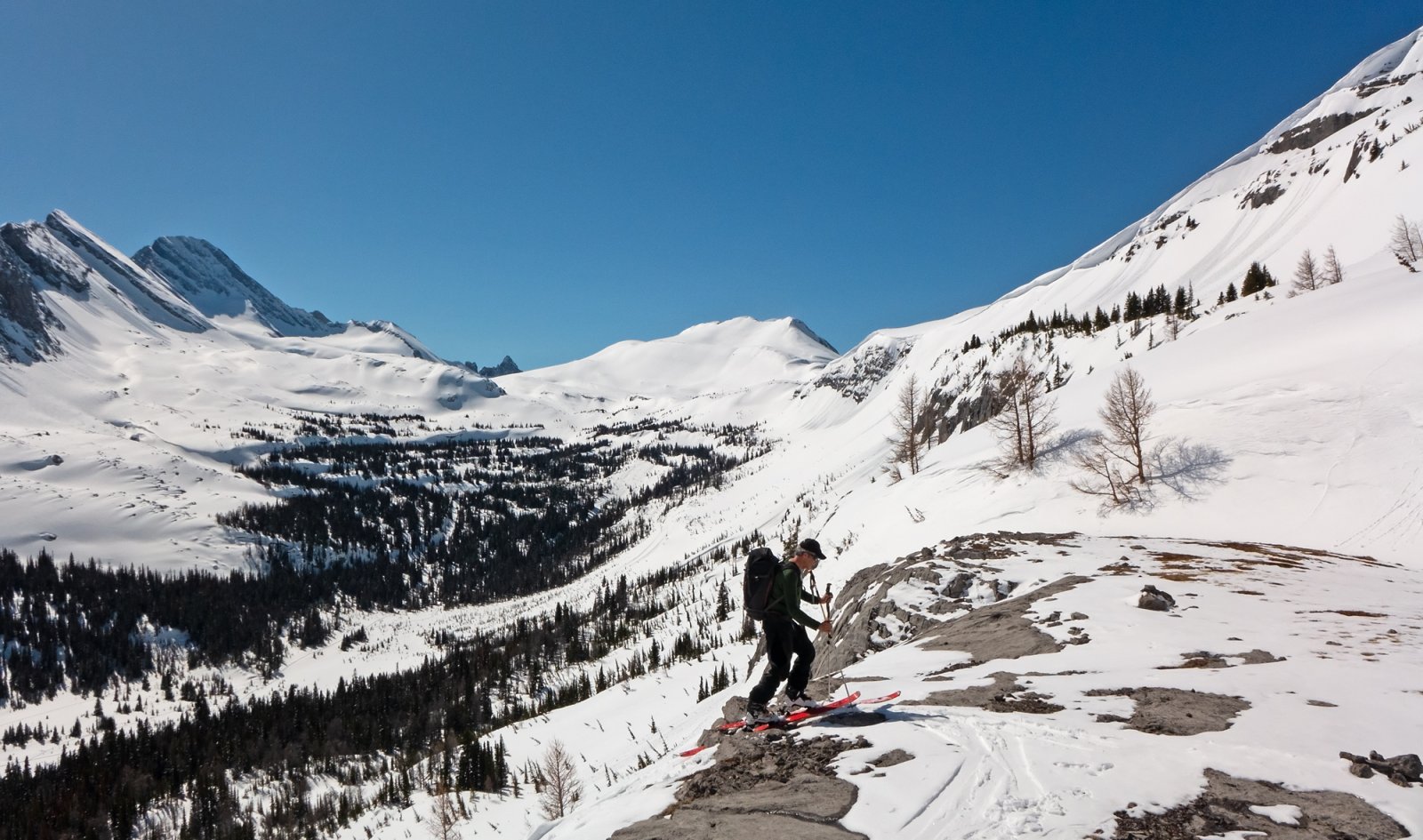 It will be "skis off" here in another day or so. South Burstall Pass at left of centre skyline, with the north pass hidden behind the corniced ridge of Snow Peak. 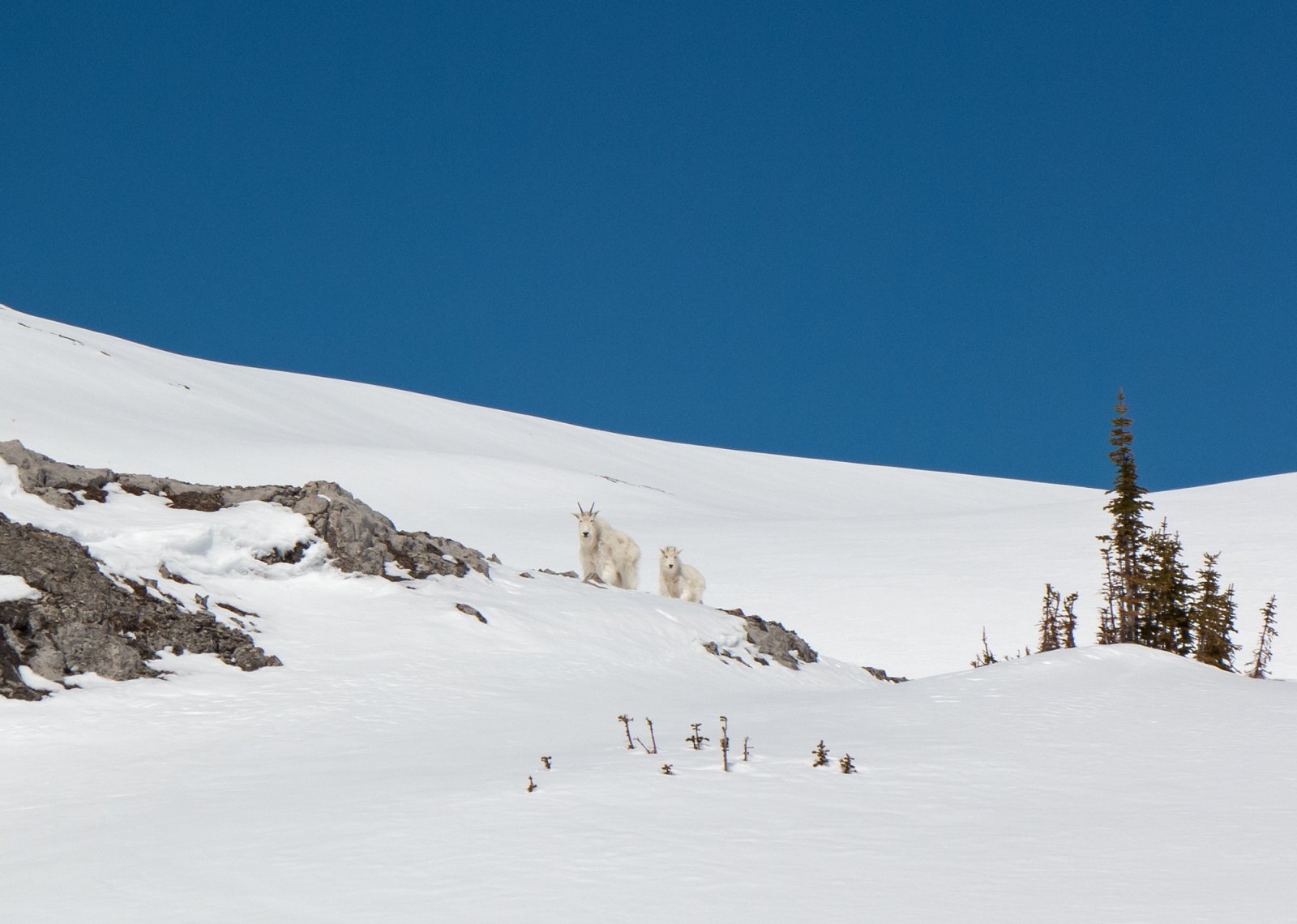 I turned around to look at the basin ahead leading to Birdwood Pass. We were being watched! 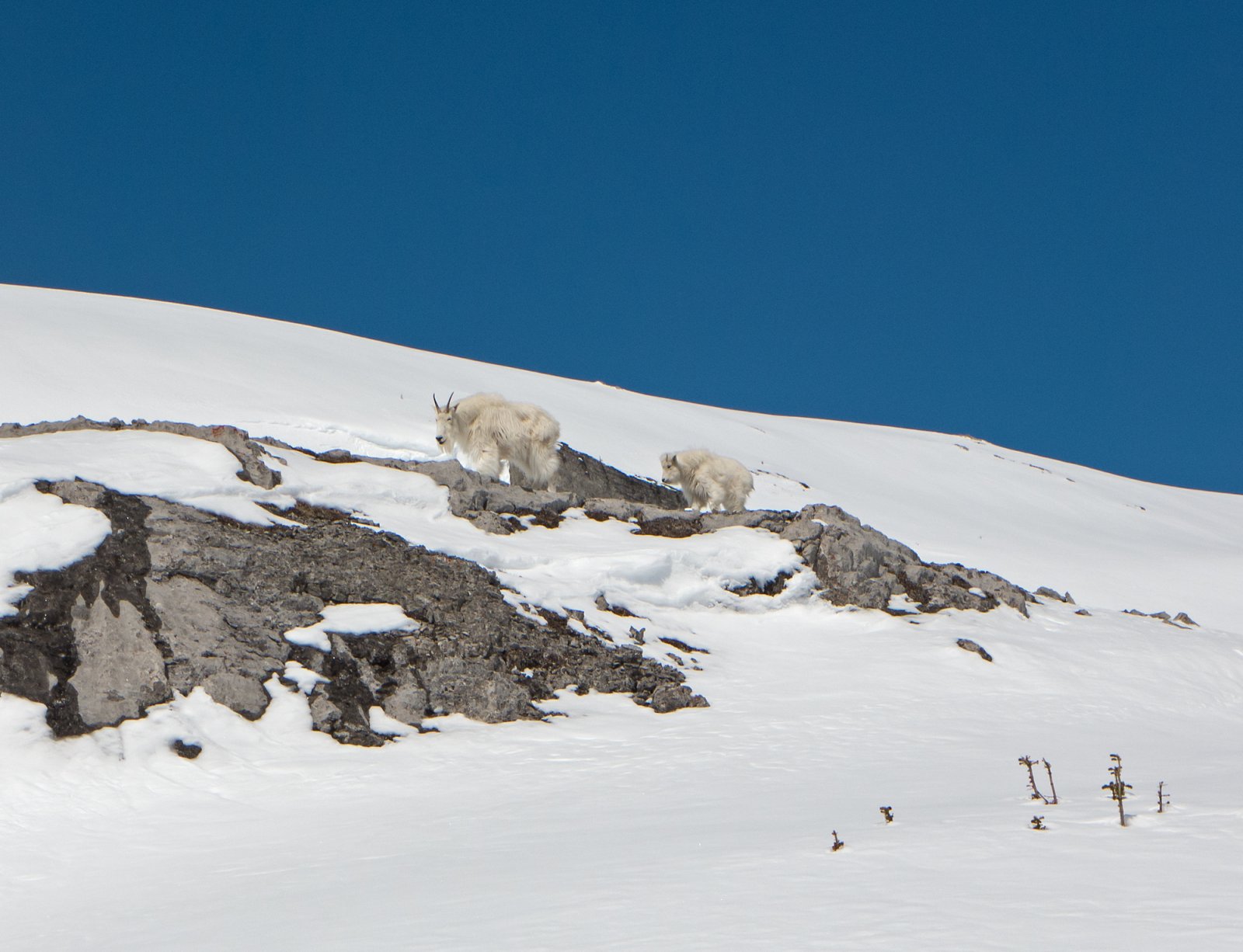 Unconcerned, the pair meandered slowly along above us, nibbling on tufts of exposed vegetation. 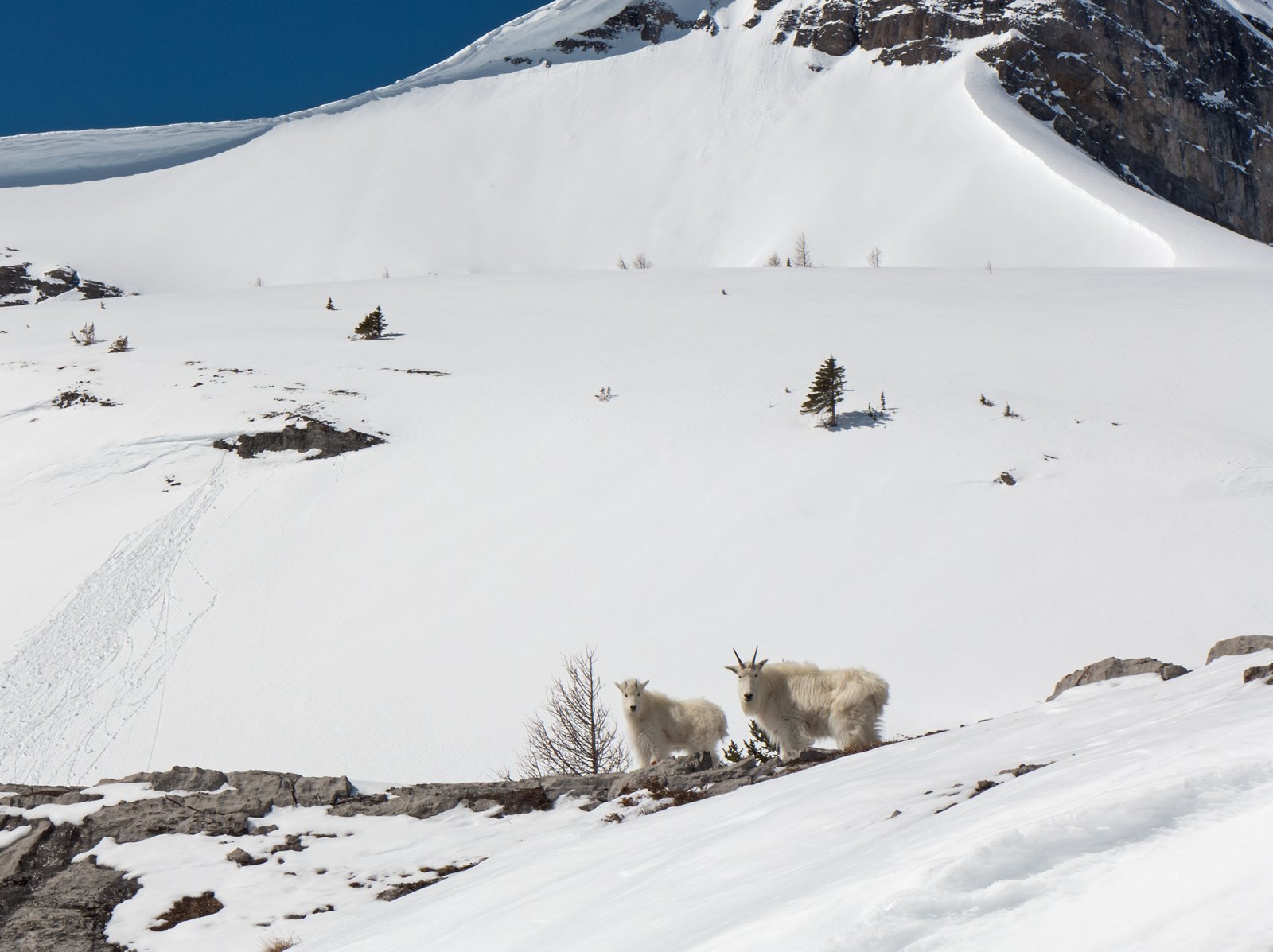 These elusive Kananaskis goats were the highlight of our day! Knowing that the weather would be stellar, I had debated bringing my best camera with tele and wide angle lenses, but opted instead for my compact Panasonic LX7 in the interests of simplicity and less bulk. Doh! 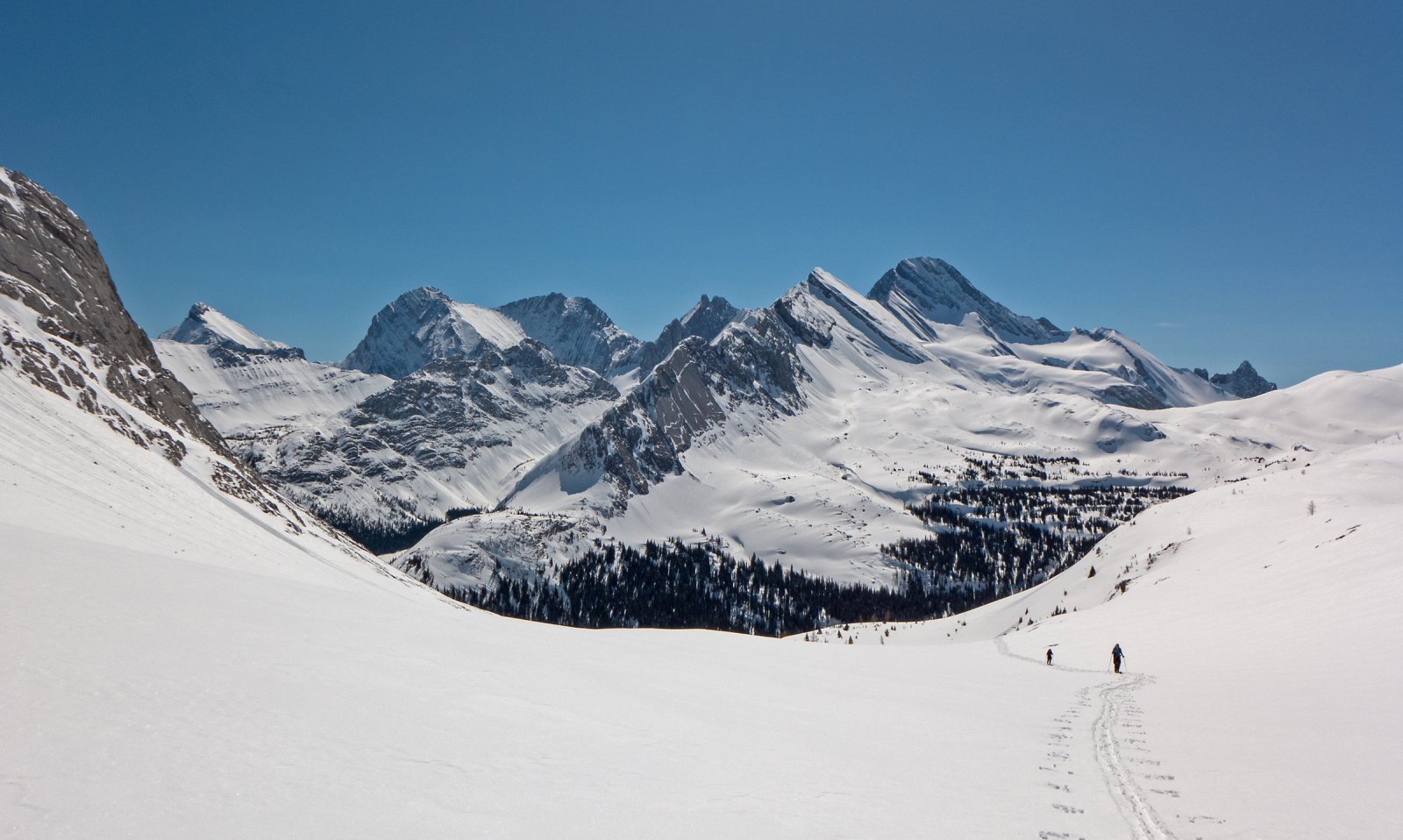 The goats wandered on, and so did we, continuing the climb to Birdwood Pass. 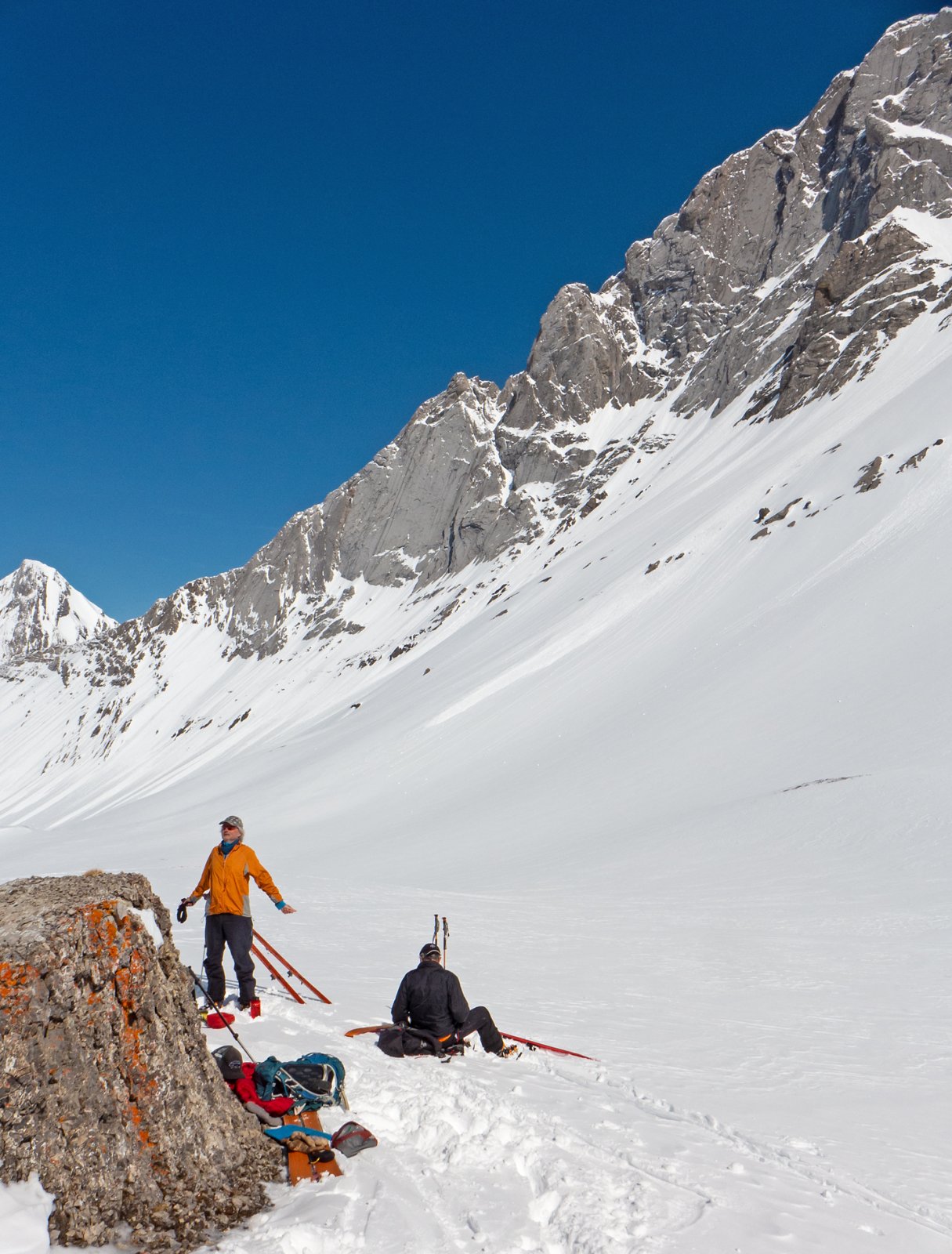 Lunchtime by the big rock, at the pass below Mount Birdwood. 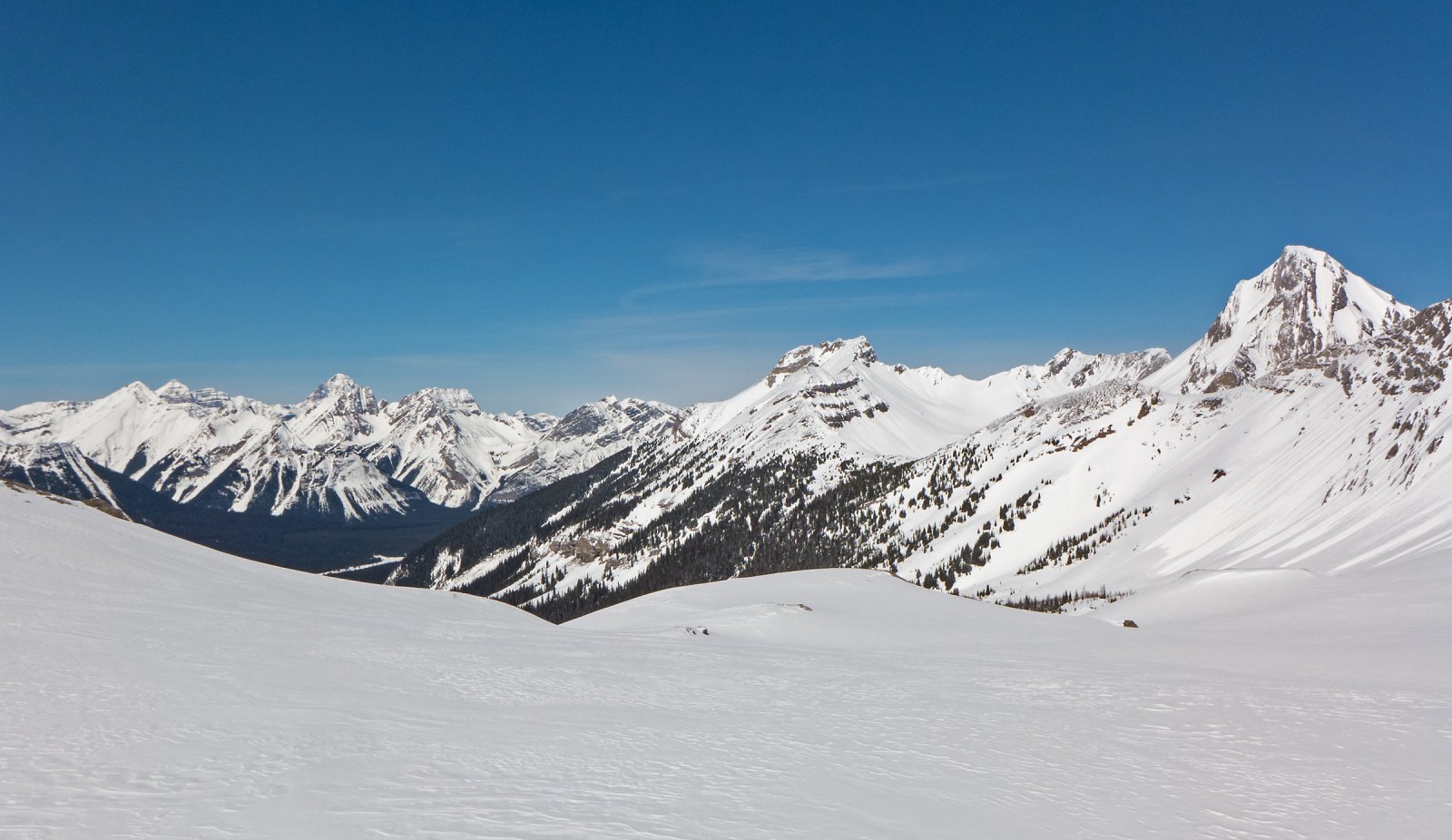 Mount Assiniboine poking out on the skyline on the view north, with Smuts Pass- our next goal- at middle frame just right of centre. 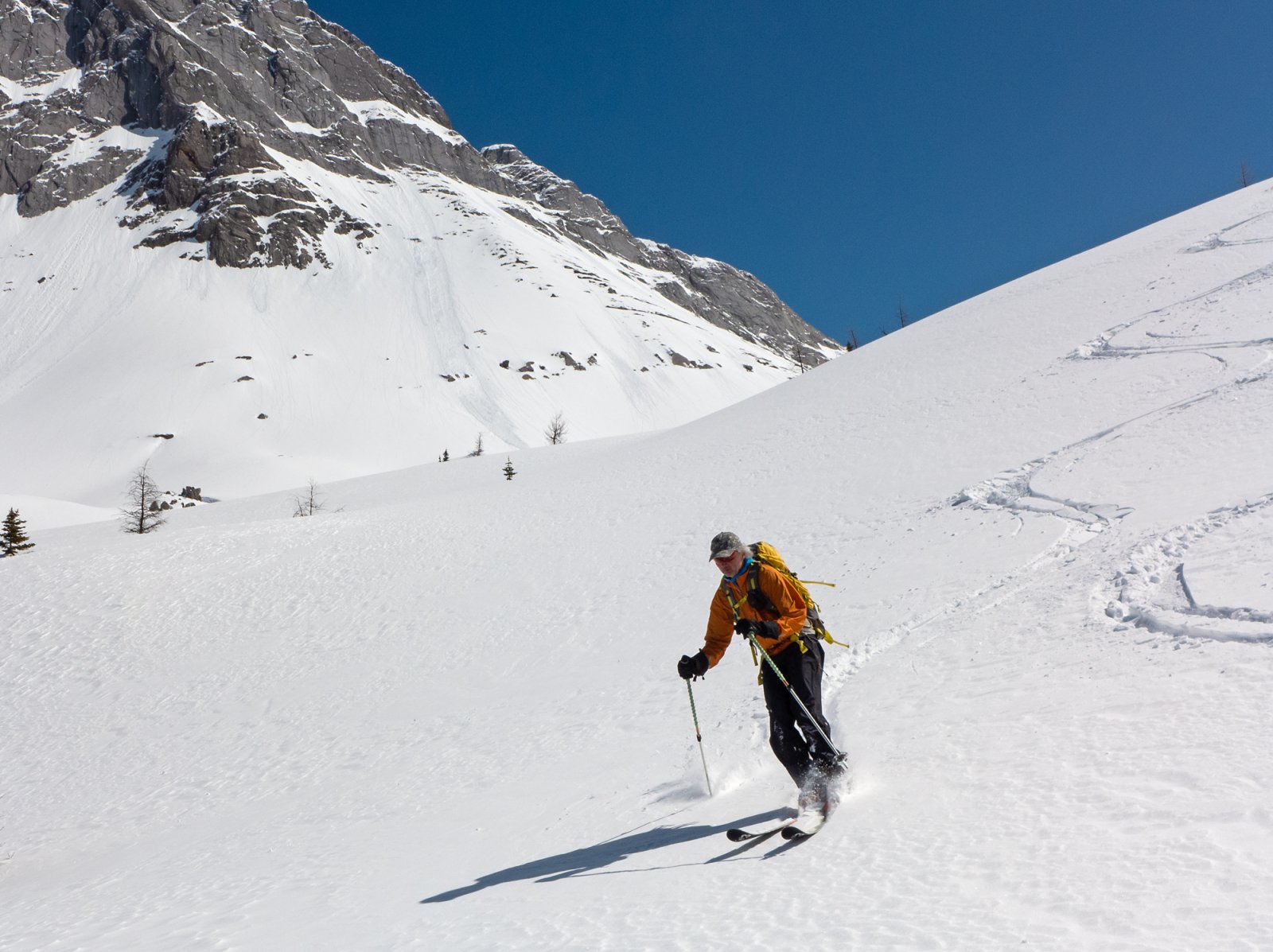 Bur first- skins off and some turns, briefly entering an isolated corner of Banff national park. Snow quality was a little disappointing, with a thin skin of wind crust making for grabby skiing until the final pitch in more sheltered larch glades. 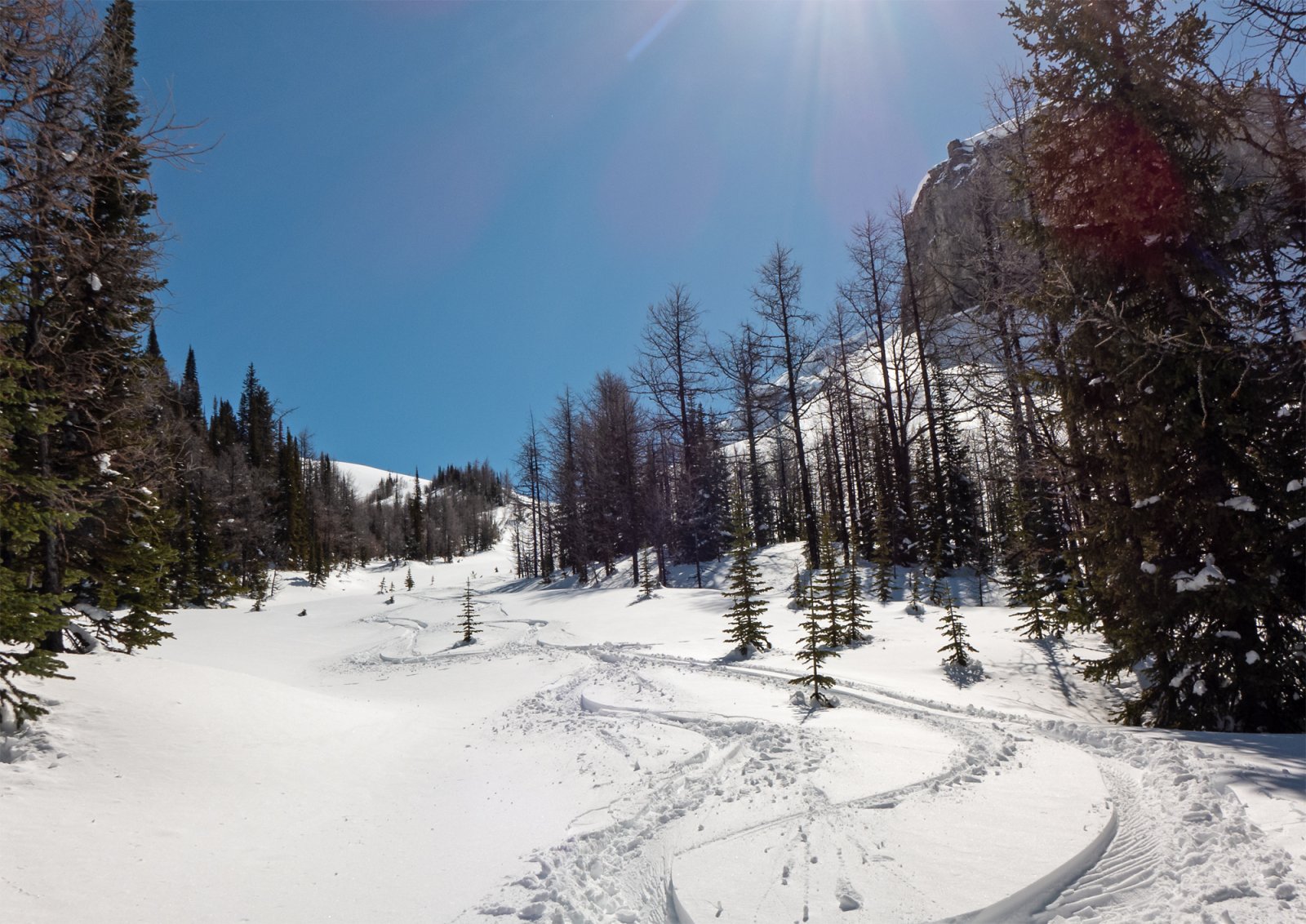 At valley bottom, the snow on this north aspect was already moist in the early afternoon sun. Sometimes a second run is called for here if the snow is good, but it's not quite worth it today. 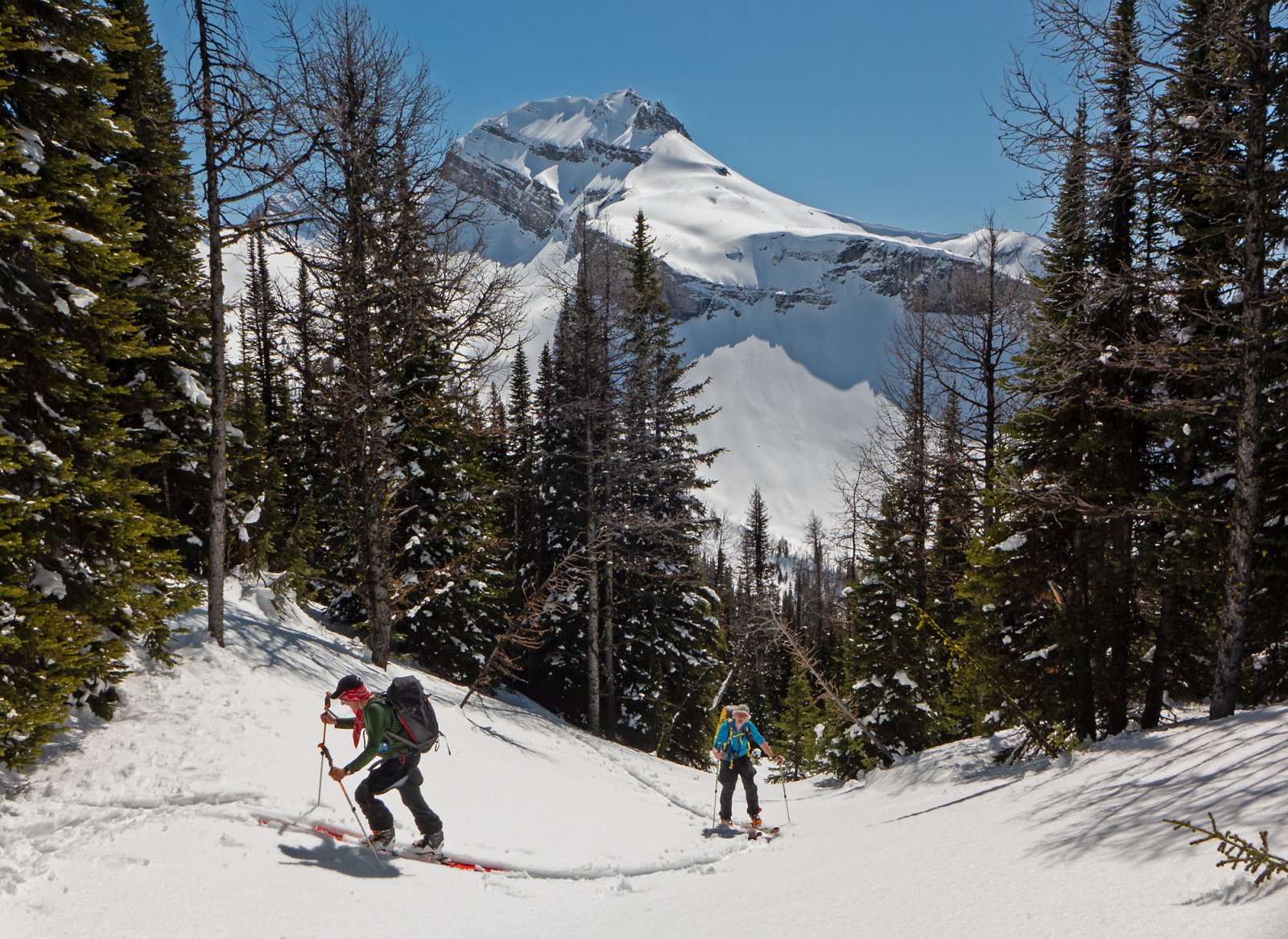 More climbing! Trailbreaking and working our way up in the hot sun through forest and glades towards Smuts Pass. 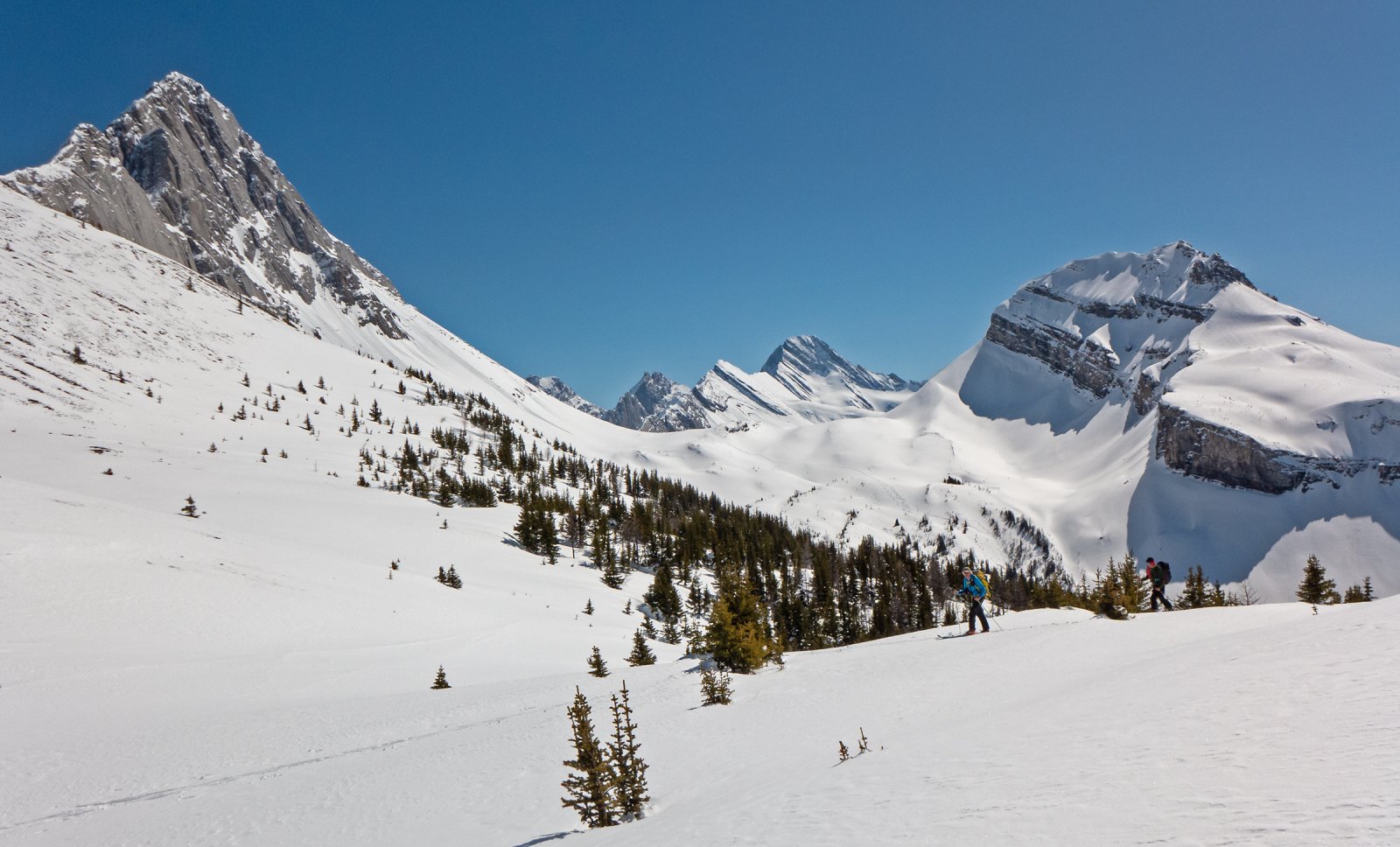 Smuts Pass! Mount Birdwood and Snow Peak frame Birdwood Pass in the middle (you can spot our turns) with Mount Sir Douglas dominating the horizon. 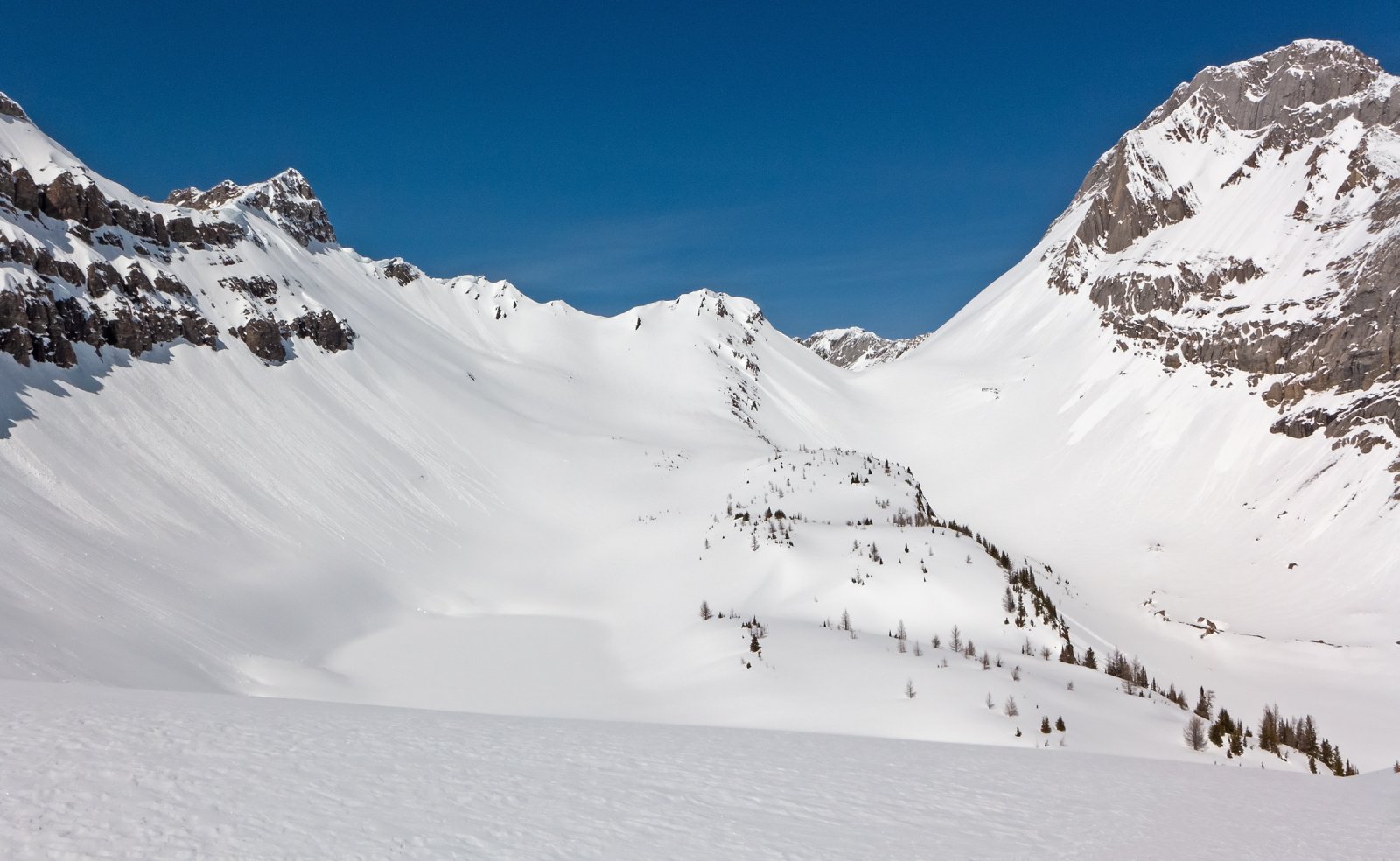 Smutwood Peak and Mount Smuts cradle the basin between the two Smuts passes. 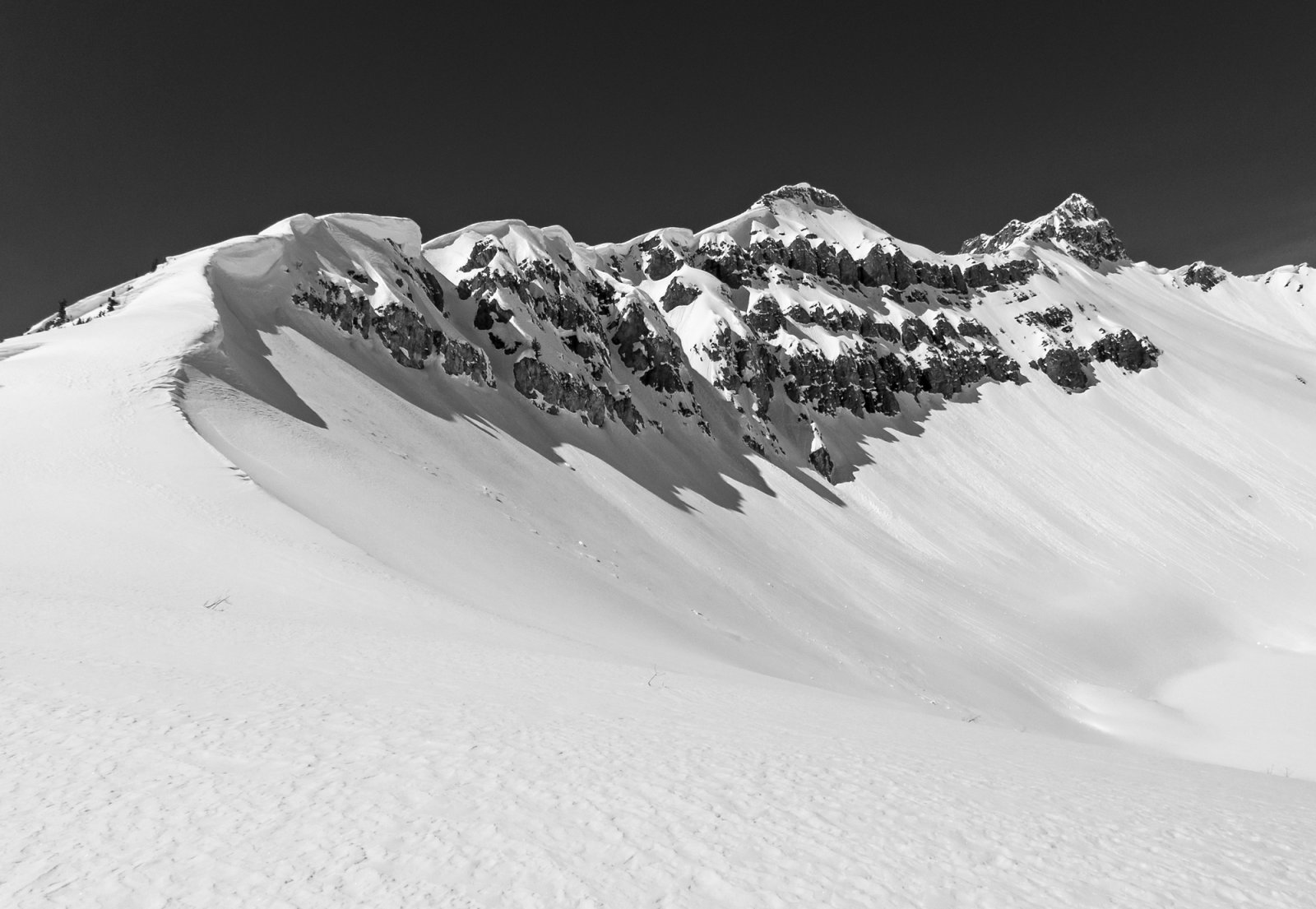 Looming cornices on the ridge of Smutwood Peak. 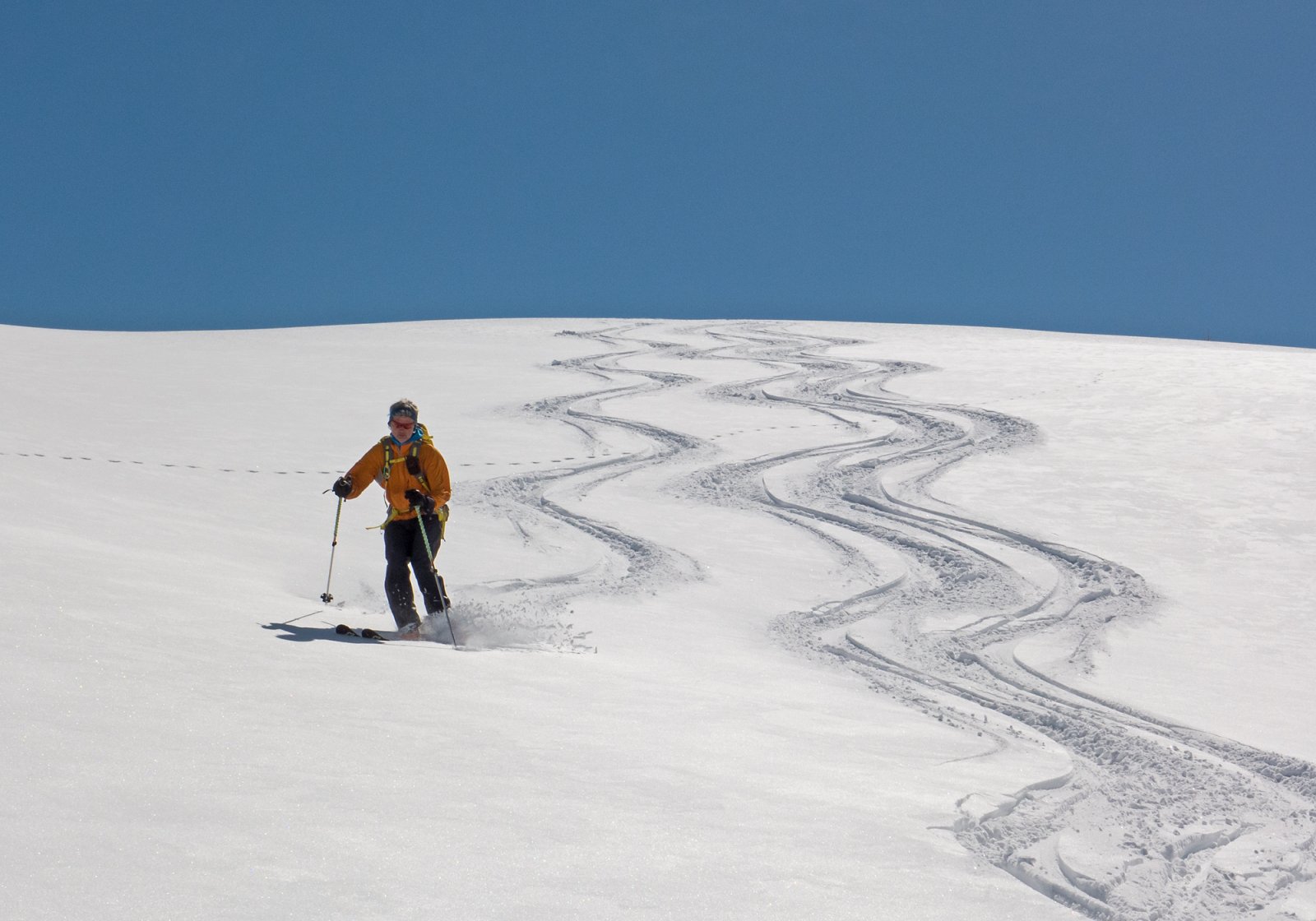 Skins off again, and cinderella snow on the short descent into the basin holding the Birdwood lakes. 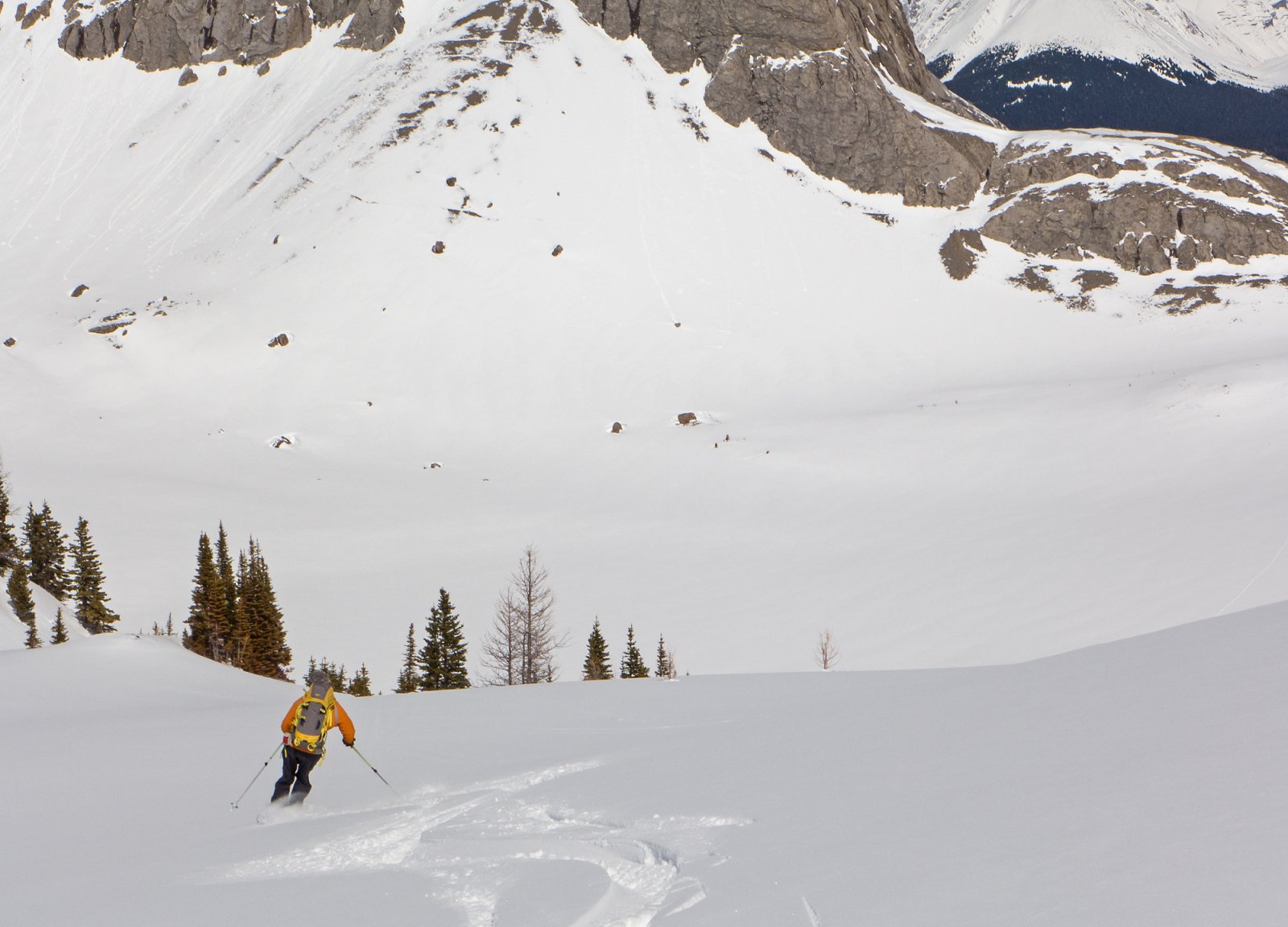 The best powder of the day! 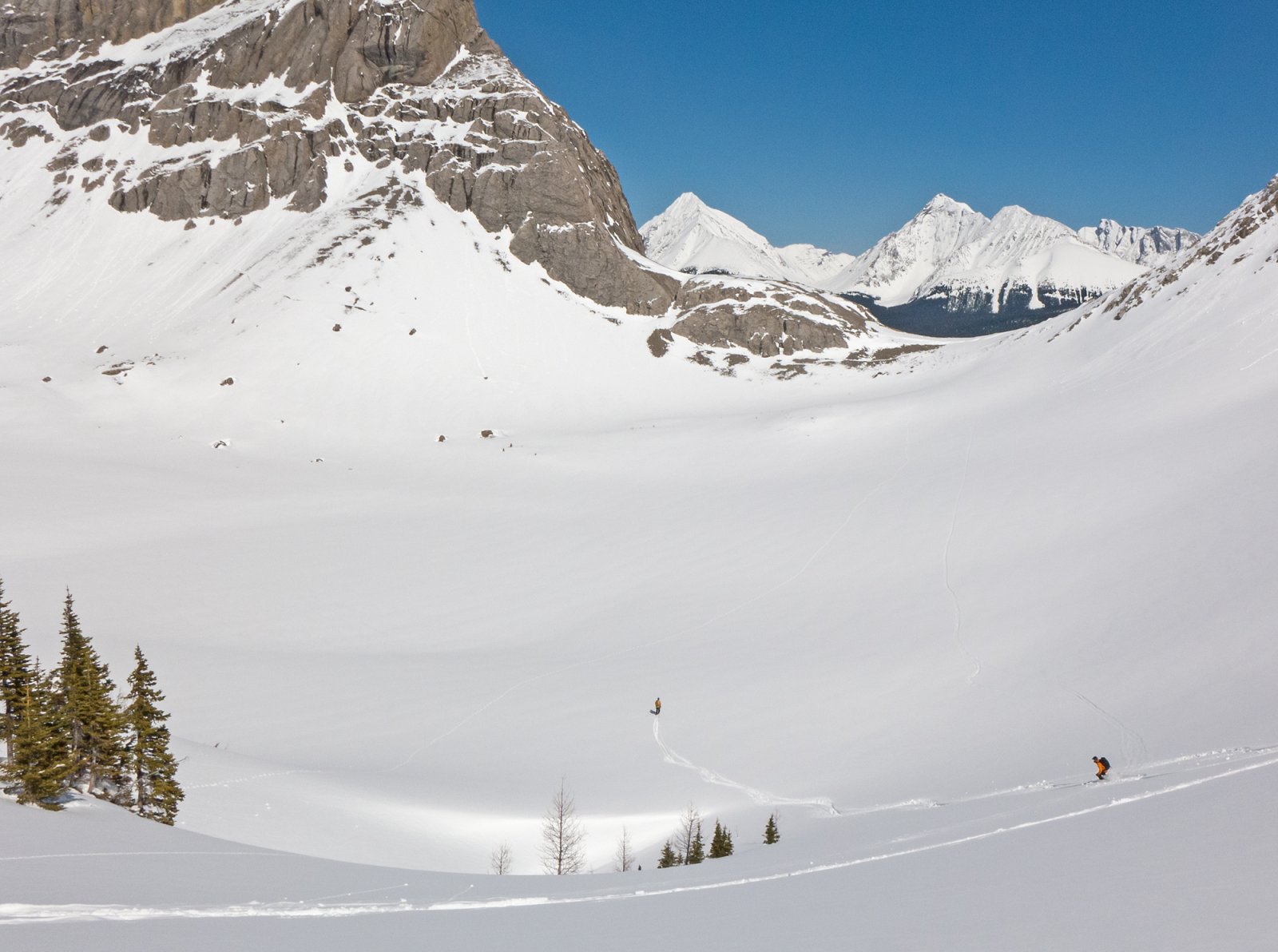 Down towards the lower Birdwood Lake, and the short ascent to the next pass. 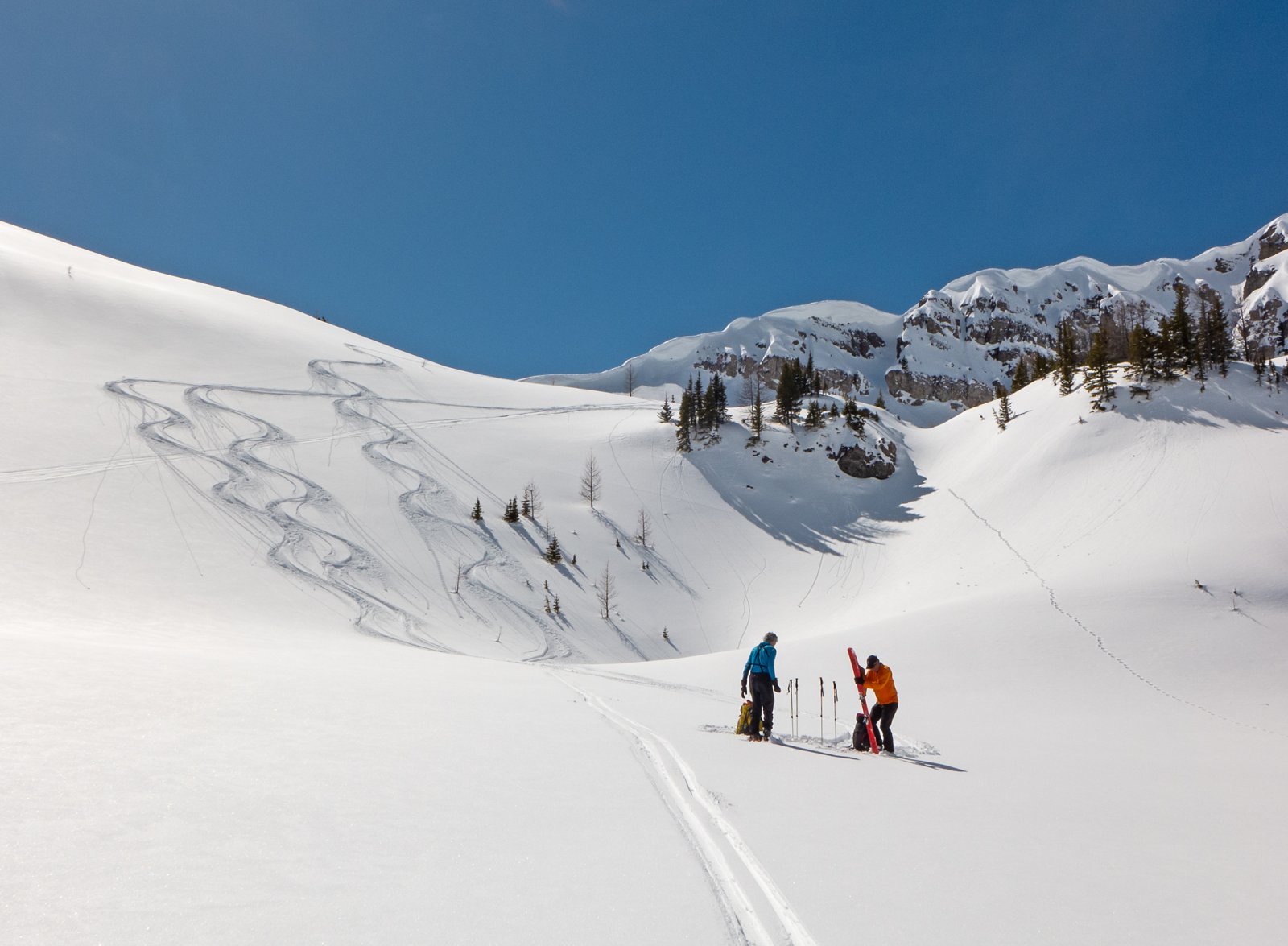 That was good, and another run is tempting, but it's time move on for the short skin up to the final col. 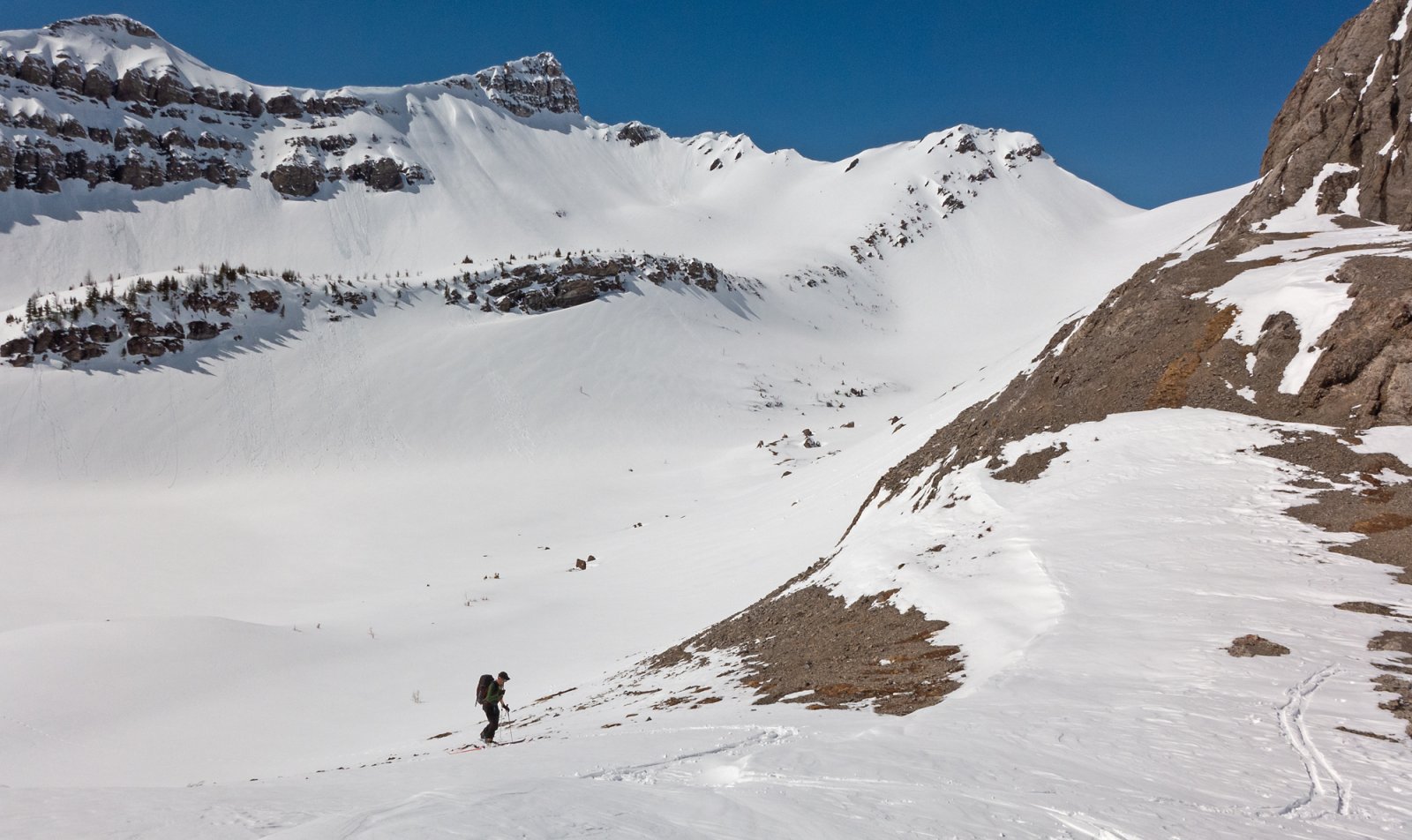 Working the patches of snow to the col. 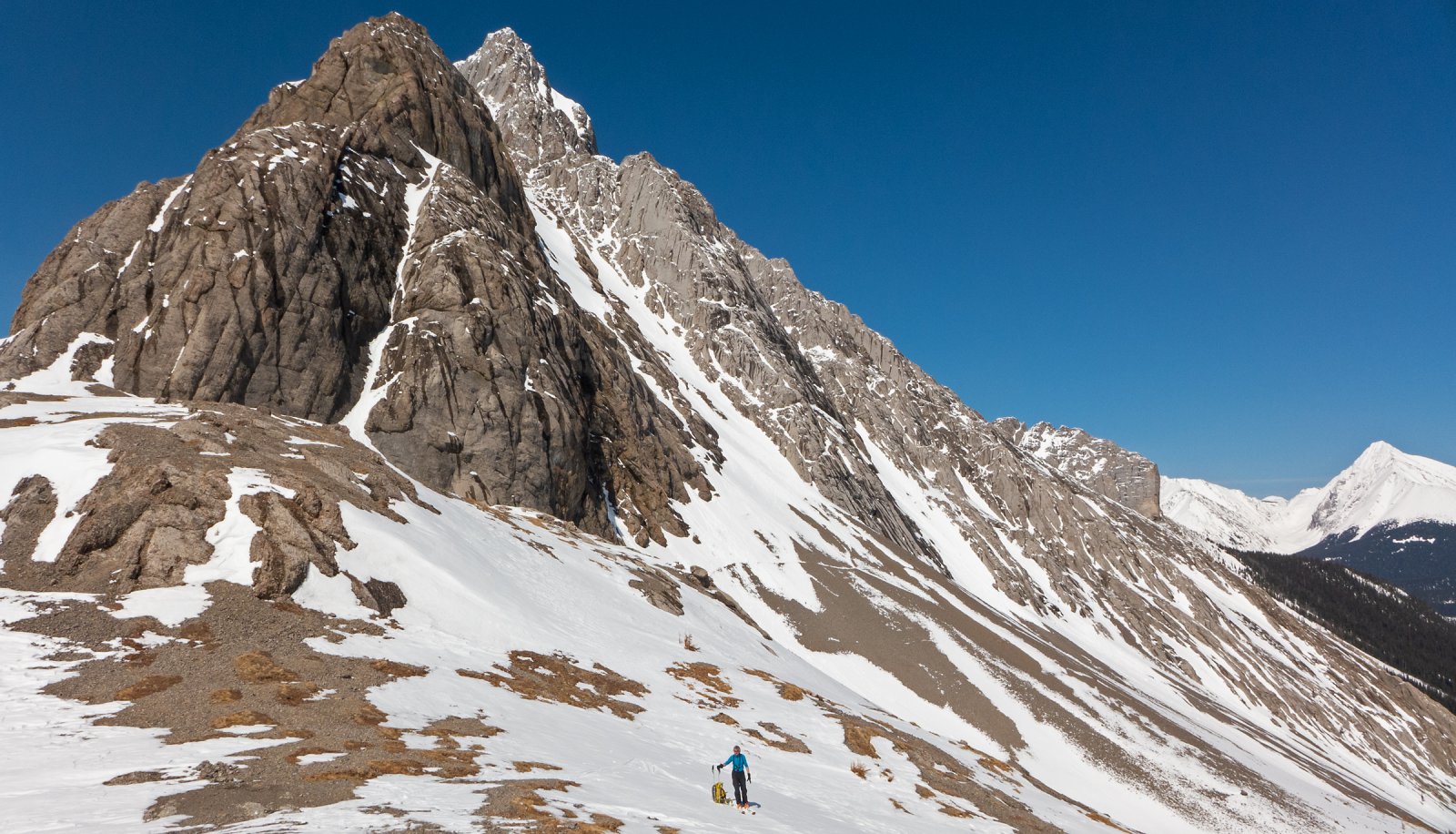 The windswept col between Mount Smuts, and Mount Birdwood at my back. 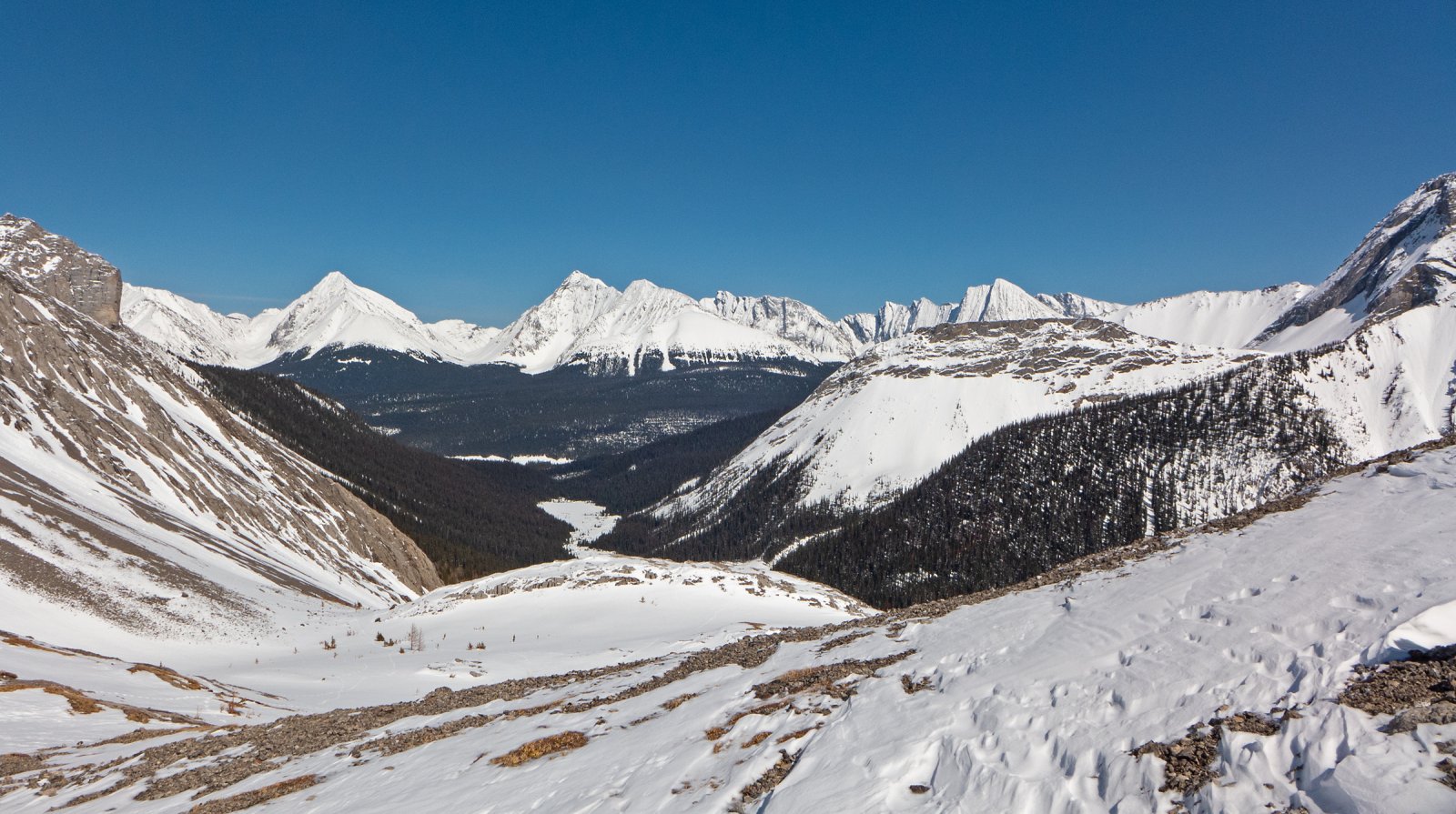 Looking out across the Smith-Dorrien to the Rummel Lake valley. Some careful skiing got us down the initial thin rocky pitch. Our shuttle car is parked at the horizontal open area visible at middle, left of centre. 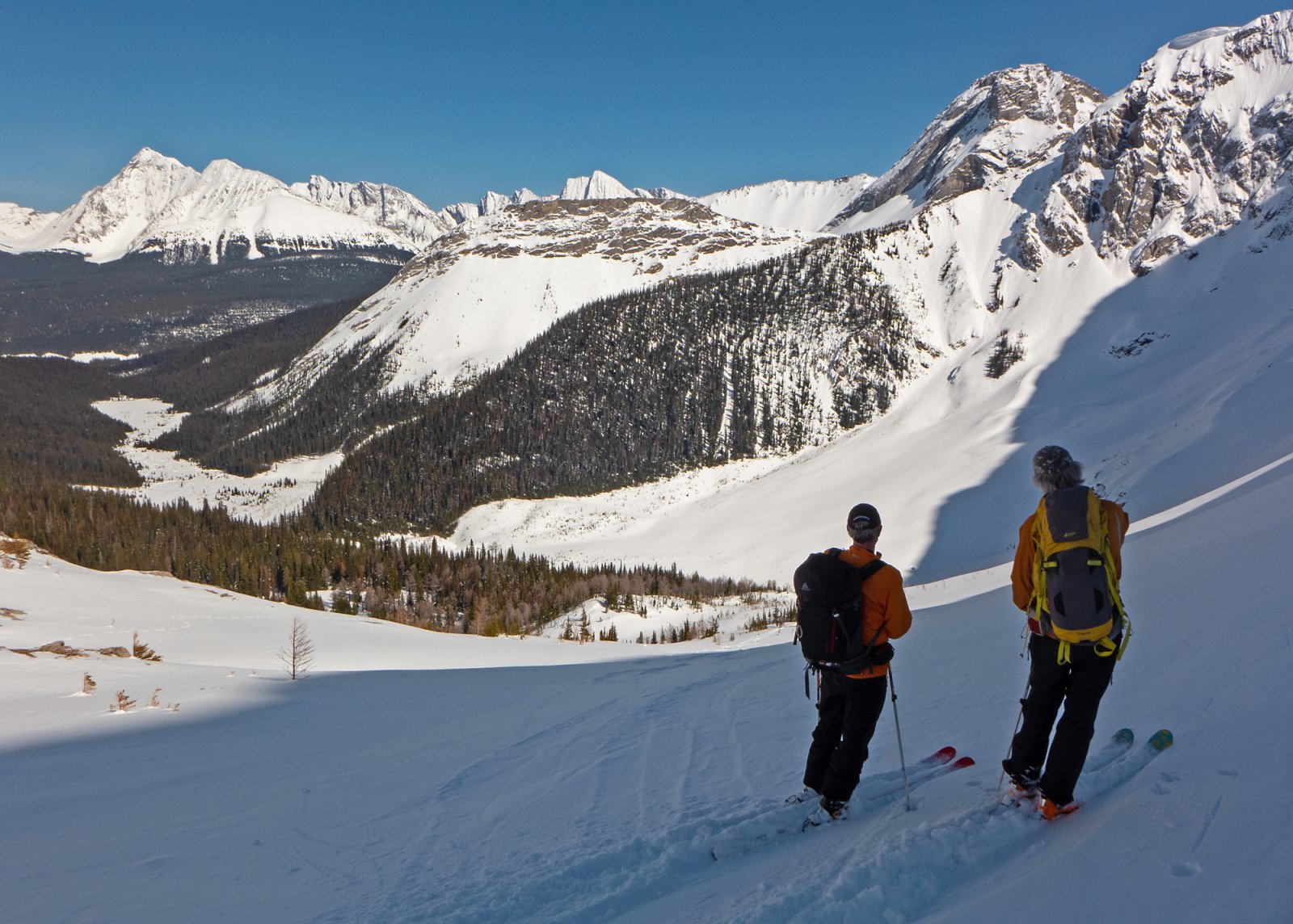 Plotting the best descent route to the Commonwealth Creek valley. In the sun with it's soft but grabby moist snow, or into the shade with the promise of dry powder? The "powder" turned out to be affected by wind, and sluffing from the cliffs of Birdwood. Skiable, but not great. 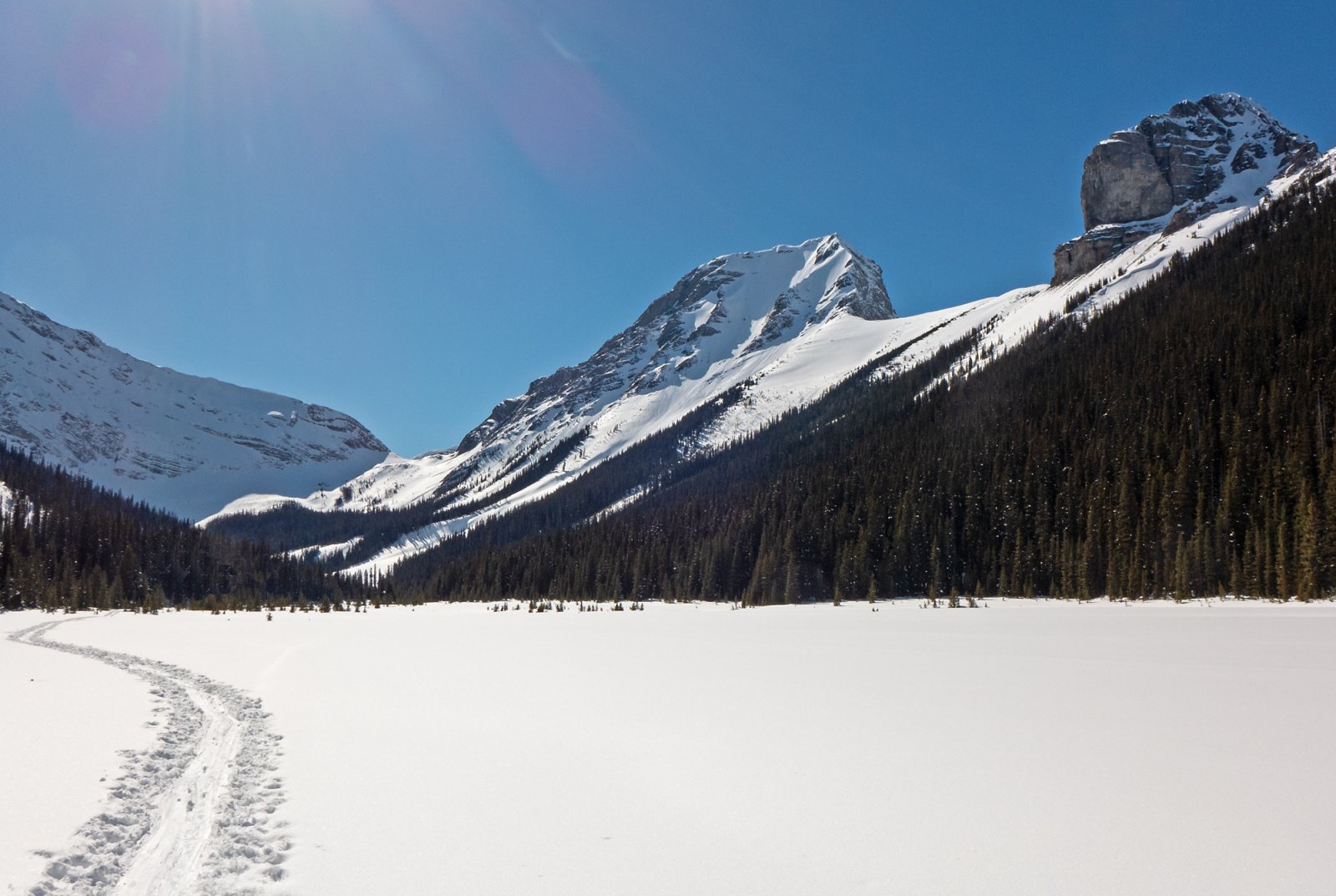 Smuts Pass, Mount Smuts and the Fist, on a look back before dropping into the winding forest trail above the creek. Full-on spring conditions here on the flats- great for grabbing handfuls of slurpee snow to hydrate- not so much for travel on skis, which turned into a double poling slog for the final few km's. No regrets though- what a fabulous day!
Another tour in the Burstall Pass area, last week:
South Burstall Pass
https://steveriggs.smugmug.com

Wow. This makes me want to move up there and take up skiing!

that looks like a great day, I really like the one B&W photo and nice photos of the goats

thanks for sharing
My trip reports: backpackandbeer.blogspot.com
You must log in or register to reply here.
Similar threads