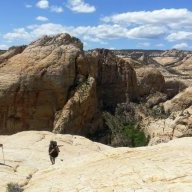 I've been itching to get to the alpine lakes by the brown cliffs in the Wind Rivers. I've done alot of research, and there are tons of routes to get over the divide. If you've been up there please let me know what route you did and how it went. These are the routes i've found so far:

Over indian pass and the knife point glacier

Over the pass near lake 10842 above wall lake

Over angel pass near spider lake

Over the pass by lake 11045 above timico lake

Or over Hay pass, i'm not sure which TH would be best for that.

Any info is greatly appreciated! I am looking for the shortest easiest route up there, i'd like to get up there quick and set up a nice base camp to explore.

After reading some more reports and staring at maps i'm thinking the Meadow Lake TH route is my best option. Anyone done any trips from that trailhead? Wondering how the road is and if the trail is in good shape.

I haven't started from Meadow Lake TH. I've been back into the Alpine Lakes area and it's rugged. We talked a little bit about that area in this thread...maybe you already stumbled across it. We started and ended at Elkhart, went counter clockwise, passed Cook, Timico, Dennis, Golden, Camp, and Snowbridge Lakes...worked our way through the upper two Alpine Lakes, went over Alpine and Indian pass, and worked our way back to the TH. It was a arduous route (for me anyhow). You can click through the pics here and figure out the lakes and passes...may help.

Here are my thoughts. I'm not going to look up exact names and such and I'm sort of shooting from the hip, so take it for what it's worth:

-Indian Pass - I've been over it once from east to west. The glacier was hard packed and icy, not too steep, relatively short, and we used crampons and ice ax.
-"Wall Lake Pass" - I've heard it "goes" and is a straight-forward route later in the season when it's free of snow.
-"10950 Pass" - don't know.
-Angel Pass - I wish we would have taken this one instead of 11045 as I think it would have been shorter (from Elkhart), although maybe steeper than 11045.
-"11045 Pass" (I think we called it Fall Creek Lake Pass)- We went over this one via Elkhart on the same trip we did Indian Pass. It took a long time to get there but it was a cake walk late in the year when we went. (We did it on day #2). We dropped down to Dennis, then Golden, and worked our way over to Alpine.
-Hay Pass - not familiar with this one but I think it's easy. I'm thinking the scenery is a little more meh around here.

If you're looking for easy don't go to the Alpine Lakes basin. The basin itself is a huge pain - lots of rock hopping along the shores of the lakes.

During a trip in 2013, we went "around" the Alpine Lakes basin. We started and ended our loop at Elkhart Park, going around toward Spider Lake, over Angel Pass, then through Bloody Hell Pass, Shangri La, and back over Indian Pass. There's really not an "easy" way to get to the Alpine Lakes. If you want the most trail, you're best coming up from the South and taking Hay Pass. The trail ends at Camp Lake, though there is faint trail beyond there. Angel Pass is not bad, and the top of the pass is a very neat spot. Lots of scrambling and boulder hopping, but it will go. The basin on the east side of Angel Pass is beautiful. Indian Pass is not too big of a deal. When we went up it from the East side, we bypassed Knife Point Glacier, instead climbing up the scree/moraines to the North. If you carry crampons, don't bother following our track. It's doable, but walking on ice with crampons sure would have been easier. At the bottom of the glacier it's typical moraine hiking--always challenging and unstable. Indian Pass/Alpine Pass does seem to be the most direct route to the Alpine Lakes basin, and it doesn't get challenging (to me) until you get off Knife Point Glacier and step onto the boulder fields. On that trip we talked to a guy who had come over "Alpine Lakes Pass" down to Camp Lake through the basin, he said that the going was of course very tough through Alpine Lakes--he had to bivy there overnight.

All that said, I'd love to make it to the Alpine Lakes basin someday. On the trip in 2013 we actually wanted to go there but felt Bloody Hell Pass was easier, and we weren't in tremendous shape for that trip. Looking back I'm not sure if that logic holds up hehe.
I've never been lost. A bit confused for a month or three, but never lost.
You must log in or register to reply here.
Similar threads