At the risk of starting yet another silly iPhone vs Android debate on these here interwebs, I wanted to see what opinions any of you fellow BCP members have of some of the latest and greatest options currently available for cell phones and their cameras.

With how good other cell phone cameras have become now days, I think they can be a good backup, if not a primary lightweight and multi-purpose camera to take along on trips. I currently have an HTC One, and while I've thoroughly enjoyed watching videos and listening to music with its superb speaker setup, it is horrible at landscape photos and the like. After my experience with it, when it comes time to upgrade here in a few months, I think I'm willing to let go of the fine speakers continued in the new HTC One M9 in exchange for a phone with better optics. I know that recently, there's been lots of praise for a Nokia Windows phone camera, but since I'm on a work plan, I'm limited to Sprint offerings. Right now, it's looking like my choice will be an iPhone 6, Samsung Galaxy S6, or LG G4. The iPhone is always attractive, but I have enough money spent on Android apps now that I think I want to stay in the Android camp. So that would narrow me down to the S6 and G4.

I'd been starting leaning on the S6, with all of its improvements over recent Galaxy models, however the G4 is looking like a great option as well.

What makes the G4 attractive is that it not only offers a f1.8 lens with probably the largest sensor out there right now, but also full control over shutter speed up to 30 second exposures and is able to capture photos in RAW. With that, it can supposedly capture pictures of streams, rivers, and waterfalls with motion blur and night shots with light trails, painting, and even a wee bit of milky way in the skies. It also has a bigger battery that should make it last a little longer than other options out there, and is now the only flagship device that allows you to remove the back door and replace it with another battery in the field in addition to expanded microSD storage. What I don't think I'd like about it, is its larger body size and how the power and volume buttons are on the back right under the camera lens.

Here's link to a review and some impressive sample shots supposedly captured with the G4 and processed by a professional landscape photographer:

If any of you reading this have the new G4, or even the S6 or iPhone 6, please share your experience with it and what you like most about the phone, particularly with regards to its camera capabilities, and what you may not like about it, camera or other.

I do have hopes of getting a Panasonic LX7 come next year as well, which would offer all these same features and a bit more, including a built in adjustable ND filter, in a fairly compact package, that would allow me to take some more creative shots than the super simple point & shoot I have now. I'll probably wait until after CES next year and see if the price doesn't drop on it. So with that in mind, I still may favor just going for the S6 for its overall form factor and a few other features it has. At some point I will likely enter the true DSLR world, but I still don't see myself wanting to carry the weight of a full DSLR rig along on many of my backpacking trips.

Sorry, had to do that.
IG: @backcountrypost 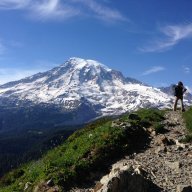 With that said, when it was time to get a new phone I went with the Galaxy Note 4. It is a huge phone (at first), but about the same size as the iPhone 6+ for reference. I thought the stylus was a gimmick, but it works super well with this phone. Plus i have a Wacom tablet, so am used to using a stylus somewhat.

The camera seems to be really good - although I admit that I am not a "phone shooter". I like how easy it is to synch up to my iMac. I also like how i can add 64GB to the already 32GB that are built in. The screen is big enough to watch movies on, really cool when backpacking .And it is 95% metal instead of plastic that the S4 was.

The camera on my wife's Galaxy S6 looks really amazing! Wish I had it. I have a GS5 and it works really well.
TARA NA!

Most newer smart phones have pretty nice cameras and I think most everyone will say they are impressed with what they have. I've particularly liked the image stabilization on my iPhone 6 Plus. With that said, it's still a cell phone photo. They all are. They're getting pretty close in quality to a decent point and shoot, but I don't think anything is quite there yet. It's great that they're all pushing each other to improve more and more though. I think Apple in particular seems to have gotten serious about making the image quality a key point. Not just in superficial gimmicky measures like megapixel count, but actual quality. Looking forward to seeing where it goes in the years to come.
IG: @backcountrypost

Hopefully it's not to late for me to chip in, but I have a GS6, and the pictures are fantastic. It can really intensify color when you want it to, and I really like that. The only thing I don't like about the camera is that the photos, when I try putting them on BCP, no matter what I do, they come in rotated wrong. I've mentioned the problem to Nick, and he's not sure why that is either.

My only complaint about the phone itself is the battery. It isn't fantastic, but you can make minor tweaks and it'll last as long as you need it to.

But the S6 is an incredible phone. I'm sure you'd like it.

I bet you'll be happy with the picture quality of either the LG or Samsung. I just googled it and skimmed some pages. Both seem good. Maybe use other features of the phone as a tie breaker? =) Sorry, not much help from me. I know where you're at in "research mode" and you want the BEST! Good luck. I'll be anxious to see what you end up with.

Side note - too bad only AT&T carries the Galaxy S6 Active. I've loved the waterproofness of the S5!
Last edited: Jul 29, 2015
You must log in or register to reply here.
Similar threads