Our outing this week was meant to be an overnight fly-fishing adventure along the Gunnison, but the weather in the Delta and Hotchkiss area didn't look like it was going to cooperate. Moab, however, was forecasted to offer excellent hiking and camping conditions. So, despite having been there the week before, Blake quashed his dreams of landing the perfect rainbow and we headed west. When we pulled into town it was in full-blown Spring Break mode. To make finding a campsite easier and speedier, we made a beeline for Ken's Lake and lucked out to find the same spot that we had last time.

After having hiked on the eastern flank of the Behind the Rocks area, Blake wanted to see what it's like further west. We dropped the trailer, jumped in the truck, and headed out the southern end of the "Tip-Toe Behind the Rocks" Jeep trail. Who thinks up these names, anyway?

The "salt" covered La Sal's as seen from the jeep trail: 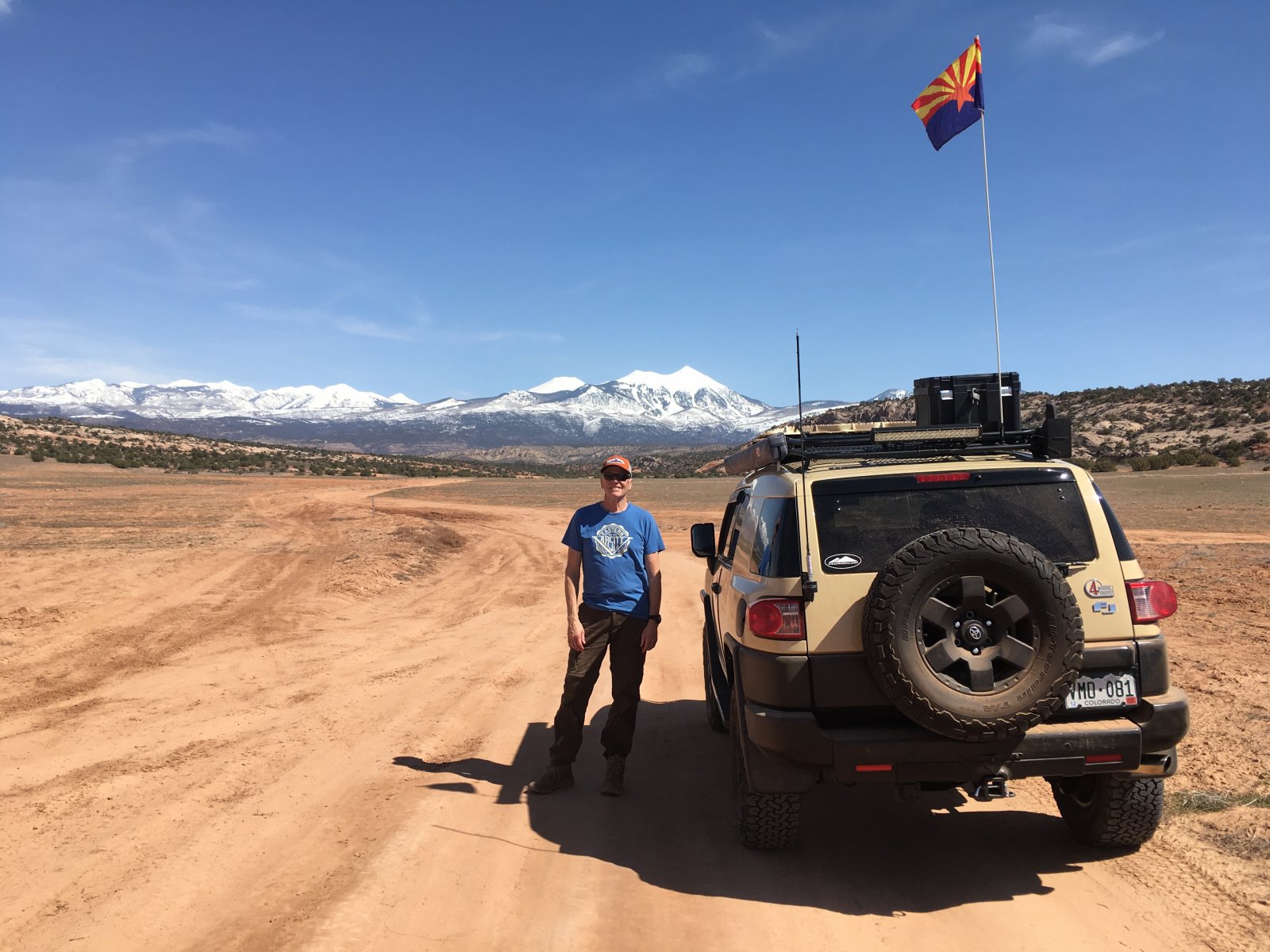 Nice view of the La Sal's along the drive: 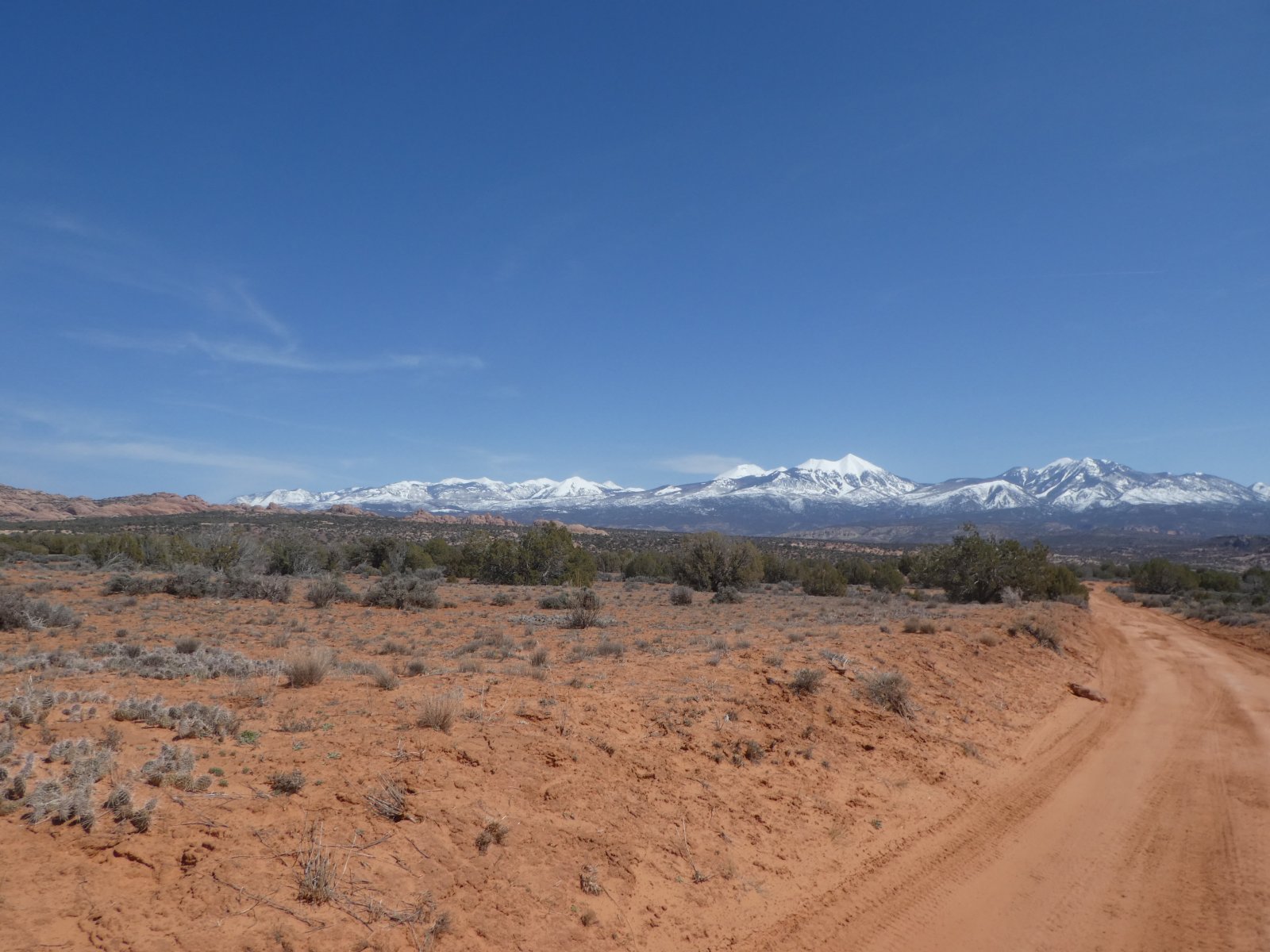 Short on time, we only made it as far as Picture Frame Arch. We wanted to get up inside the arch to get the picture frame "effect". But the slickrock was damp and doing its slick-y thing, so we put it off for another visit. We re-traced our tracks and made it back to camp in time to take a casual hike up to Faux Falls. To us they weren't very impressive (I didn't bother to take any photos). However, if it's hot and you have young kids (or are young at heart), we could see this being a refreshing destination.

The next morning we checked our gear and headed into Arches to do some canyoneering in U-Turn Canyon. As with any rappelling that we do, I had studied the route, triplogs, and YouTube videos in great detail. We don't like surprises when canyoneering! Despite my scrutiny of the triplogs, I was surprised by the moves required to get up the rather vertical chute/drainage leading to the head of the canyon. Two times I removed my pack to pass it up to Blake so that I could alter my center of gravity and "hug" a slab more closely. It wasn't scary, but more challenging than I took away from others' photos. Inexperienced hikers who are looking to try their hand at rappelling (for which U-Turn is known) might be daunted by this desert scramble. Here's the one photo that I took before stowing the camera and focusing on getting to the top.

The first three raps were pretty straight-forward. We'd read that #1 and #3 could be down-climbed (not by us!) and that #2 could be descended by a big jump (I've broke my ankle once before, thank you very much!). Instead we roped-up and enjoyed the practice of the easy-peasy rappels.

The splendor of towering sandstone in the background: 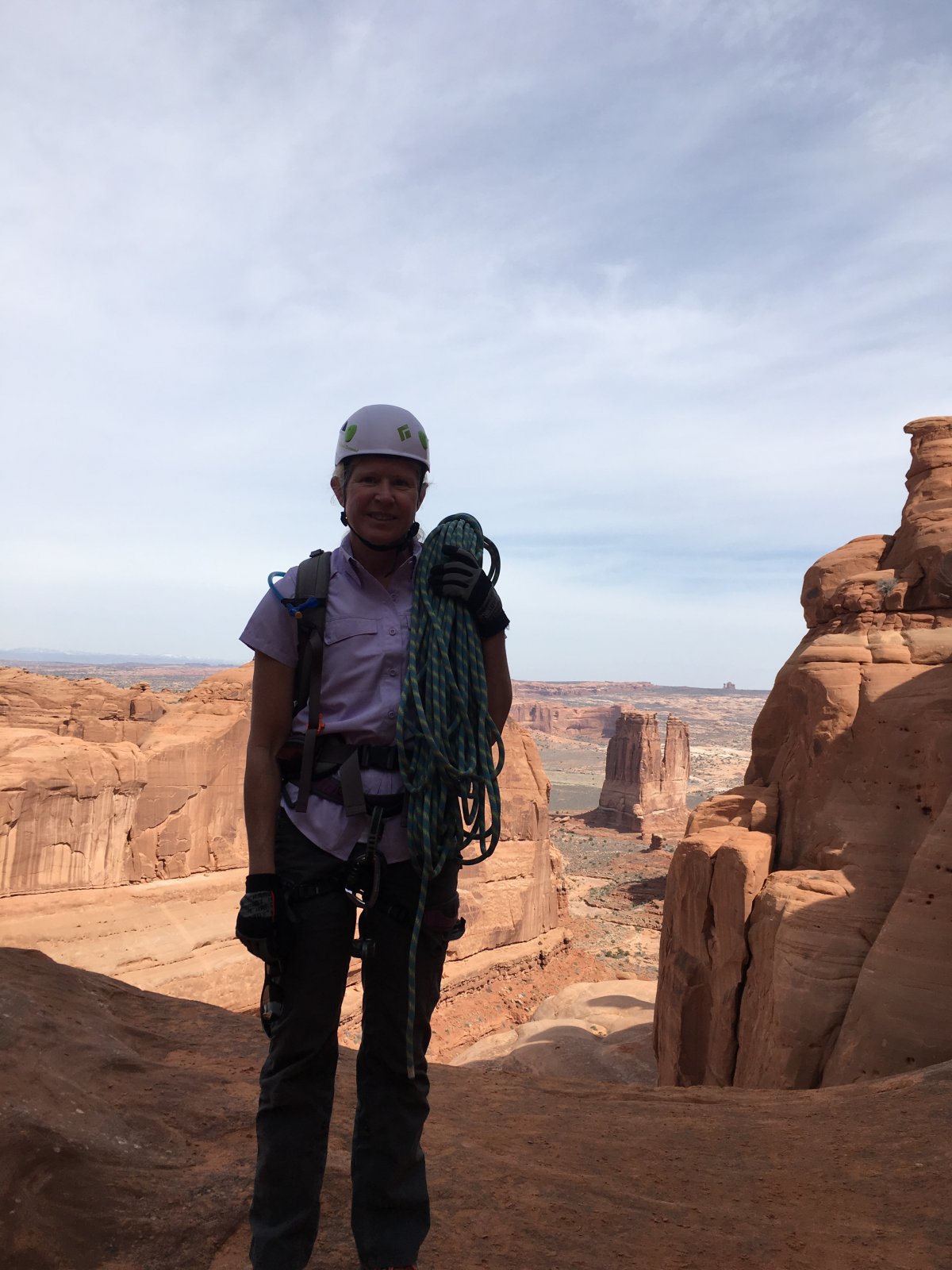 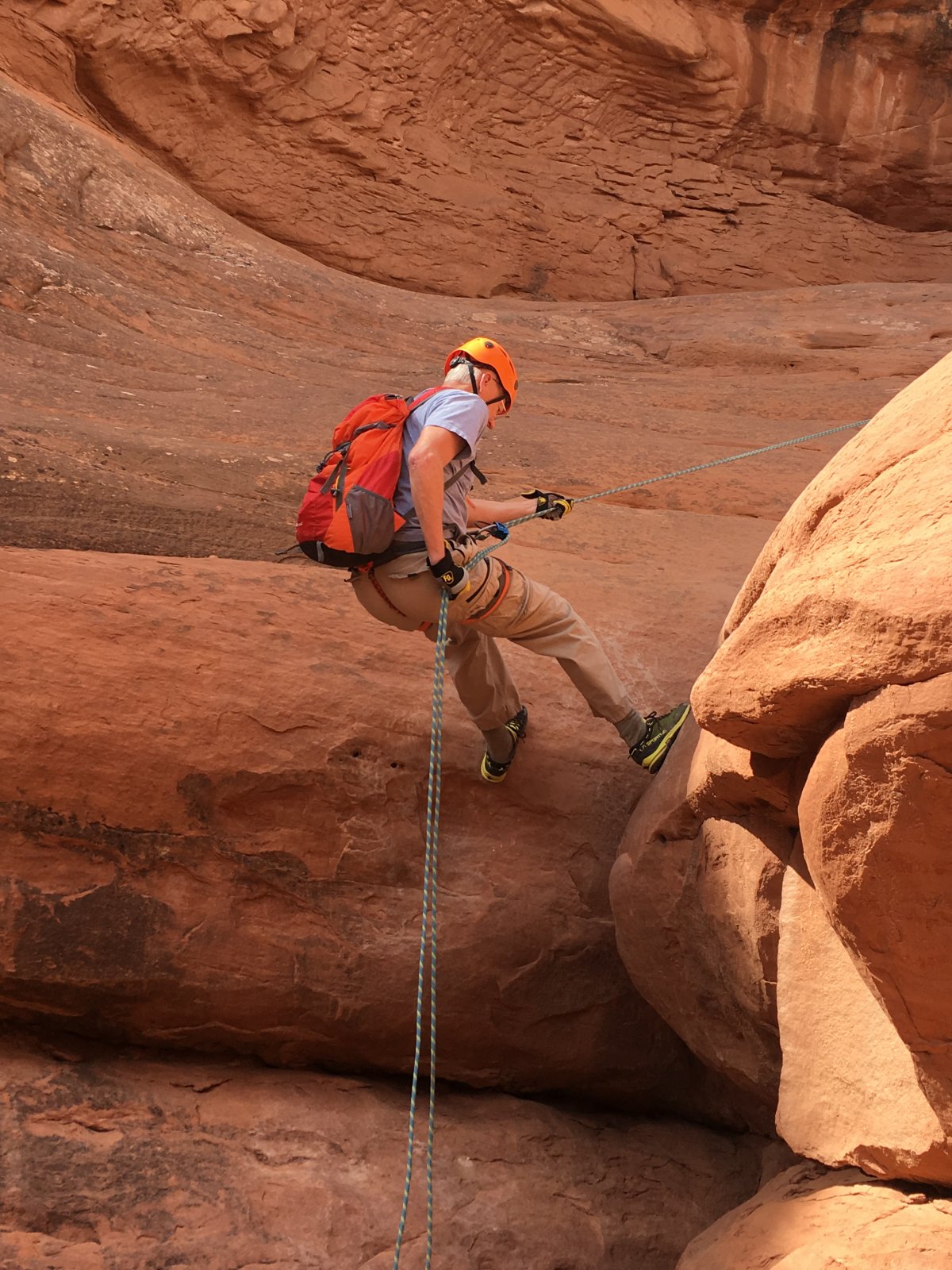 Then came the more serious 100-foot rappel. We didn't care for the anchor on the left (looking down-canyon), not because of the way it was fixed but because what we thought would be a very awkward and somewhat exposed clipping in. We opted for the anchor on the right (which is next to a big boulder and difficult to see unless you're close to it). Tying in involved scootching down the incline to clip in, rolling over onto your knees, then popping up on to your feet (very near the edge), and letting the rope take your weight. Attention-grabbing for us once-or-twice-a-year-canyoneers.

Since our rope isn't long enough to have both ends threaded through our belay devices, we employed a pull rope and a biner block. Going down first, I was acutely aware that there was much less friction to slow my descent (or, at least that's how it seemed at the time!). Not far into the rappel you lose contact with the canyon walls. That's when I started spinning. Not a great feeling. Fortunately, I was able to touch the wall another 15 feet down and stop the rotation. Blake made it down just fine, but had a scare when he couldn't hear me holler that I was safe and off the rope (he couldn't see me from the top). Walkie-talkies might be helpful in the future.

Anyway, here are photos of what you'll see while in U-Turn: 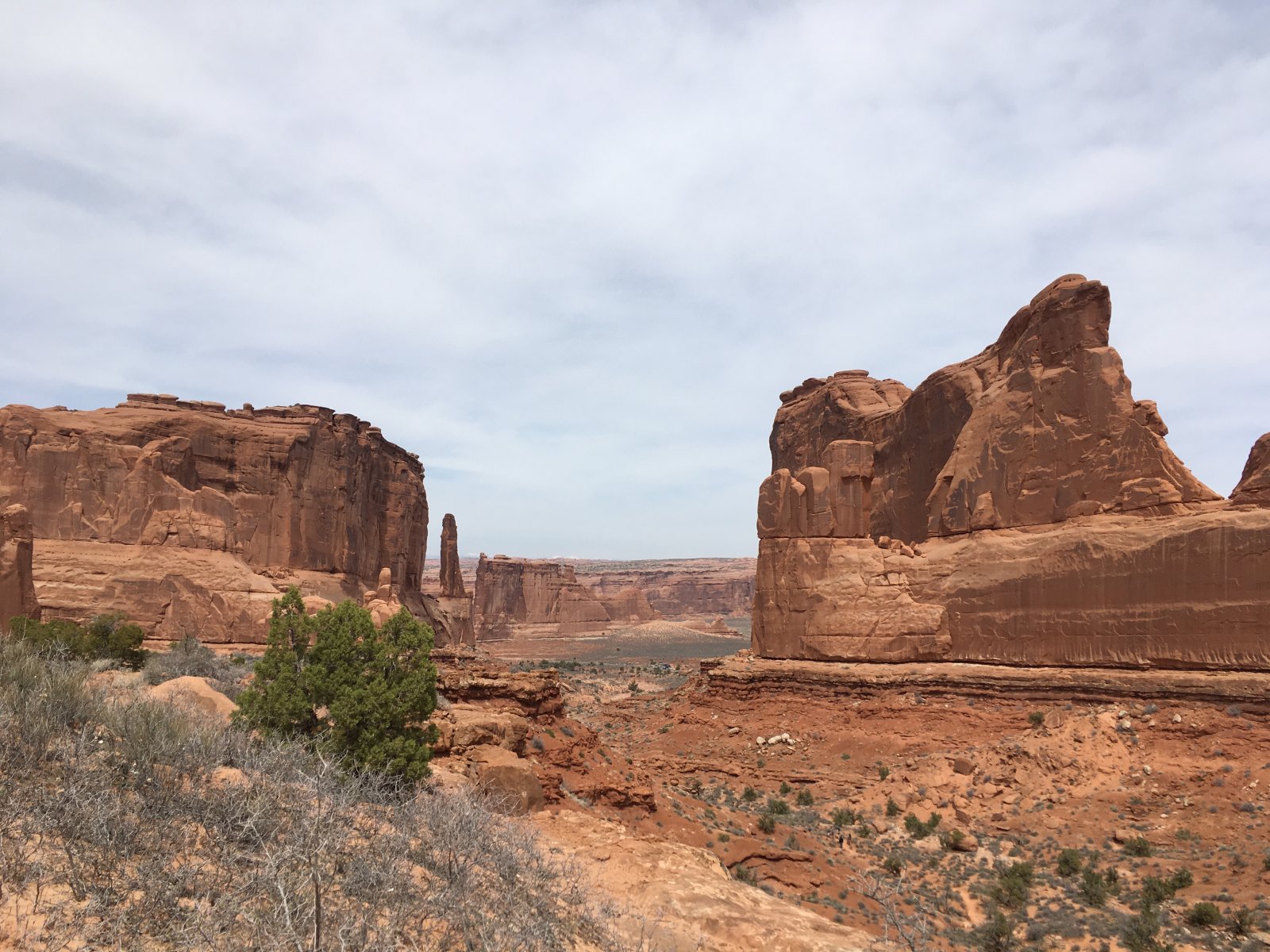 From there we headed out UT-313 to check out Seven Mile Canyon. We'd had enough exertion (and adrenaline) for the day, so we mostly drove it and made the easy scrambles to some rock art panels: 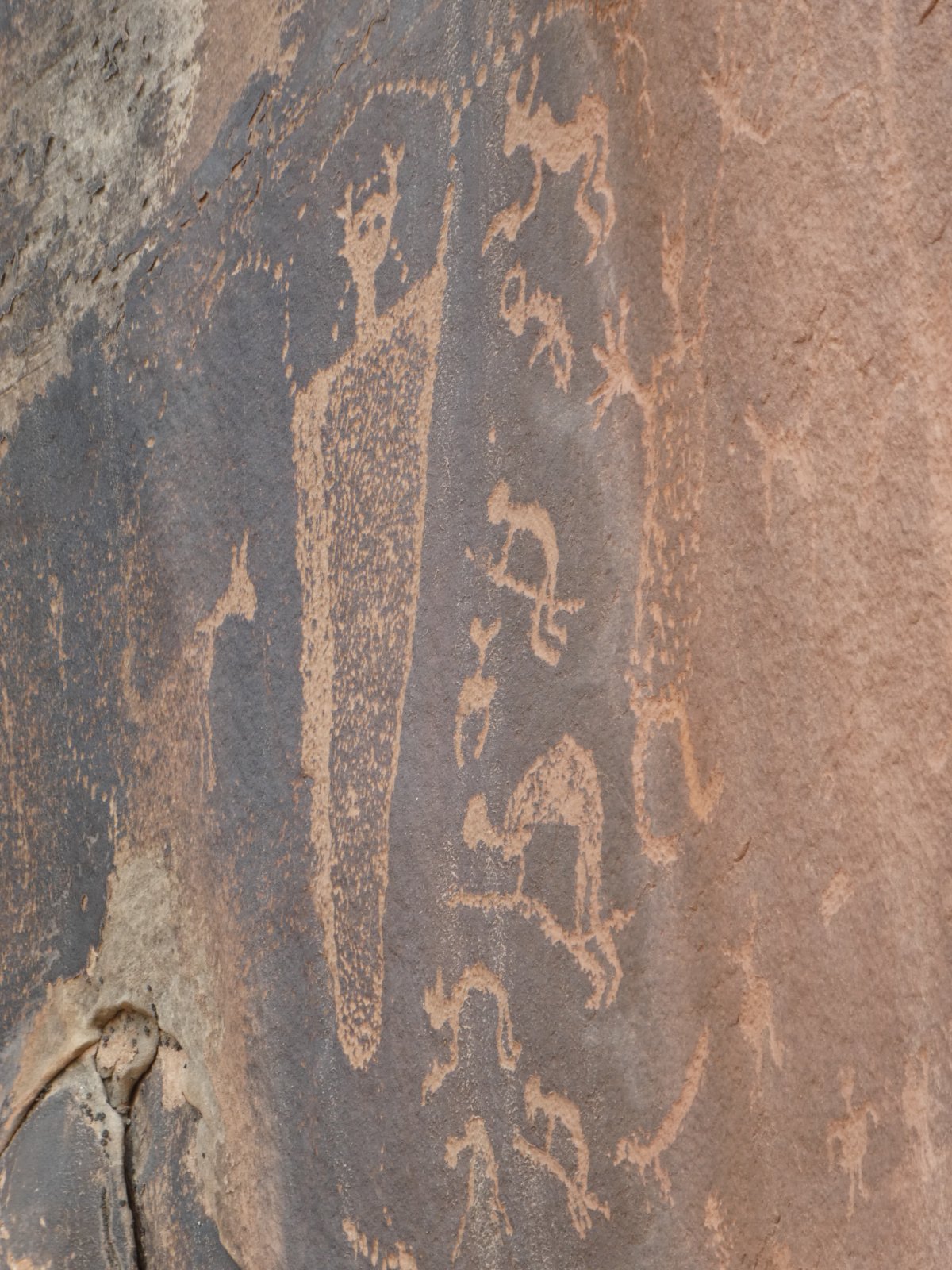 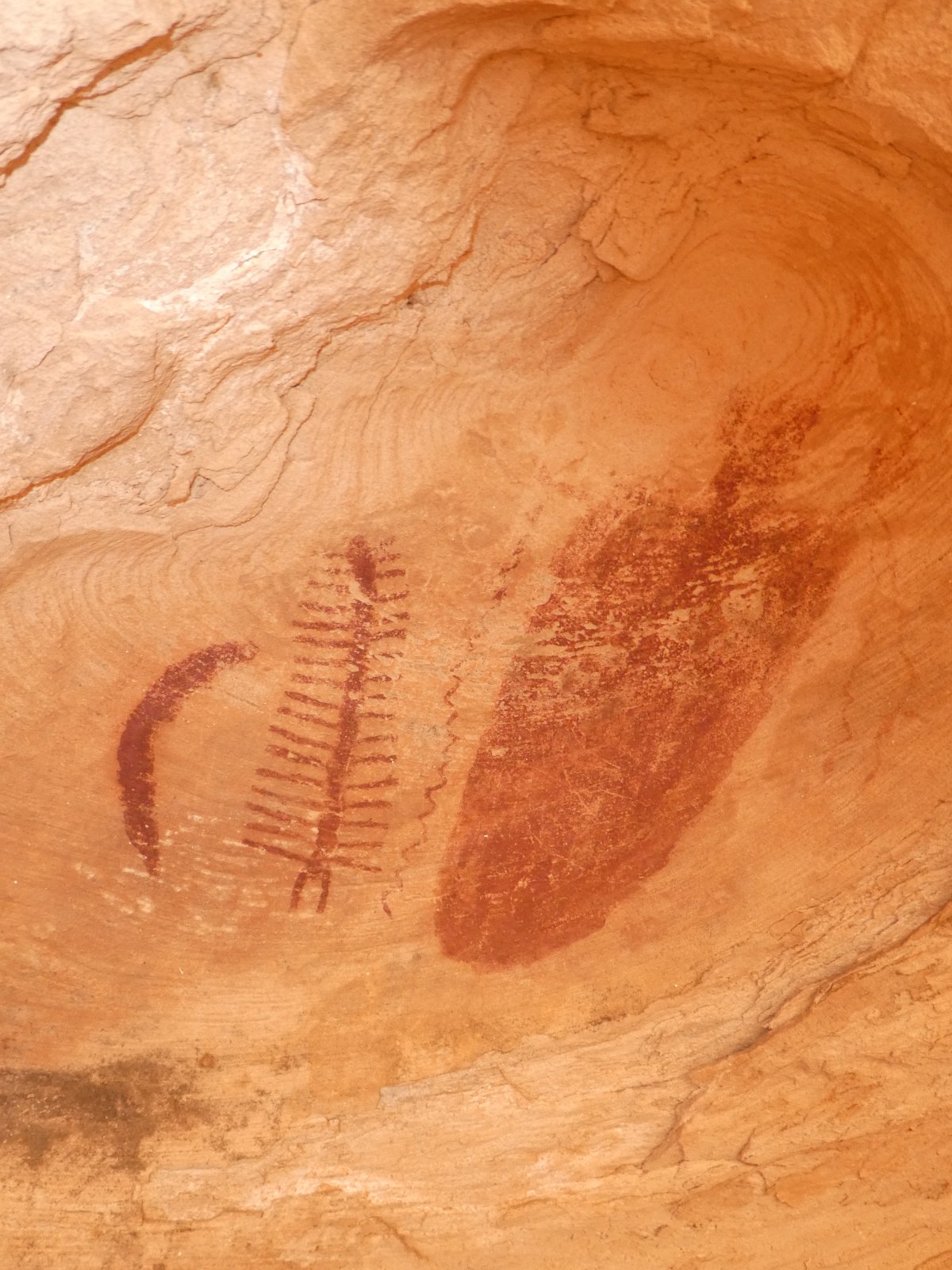 Here's a tip for anyone in the Moab area wanting a (semi) hot shower.......The town's rec/aquatic center offers such for $5 a person. We partook. Very clean (us and the showers).

The next day we broke camp and drove out to Devils Garden to hike to Dark Angel. We were pleased to see so many families out being active, but it didn't make for a peaceful hike. Regardless, it was an enjoyable one that afforded great views into the Salt Valley (another place to explore!) and onto the Book Cliffs.

An obligatory family photo at the Black Arch overlook: 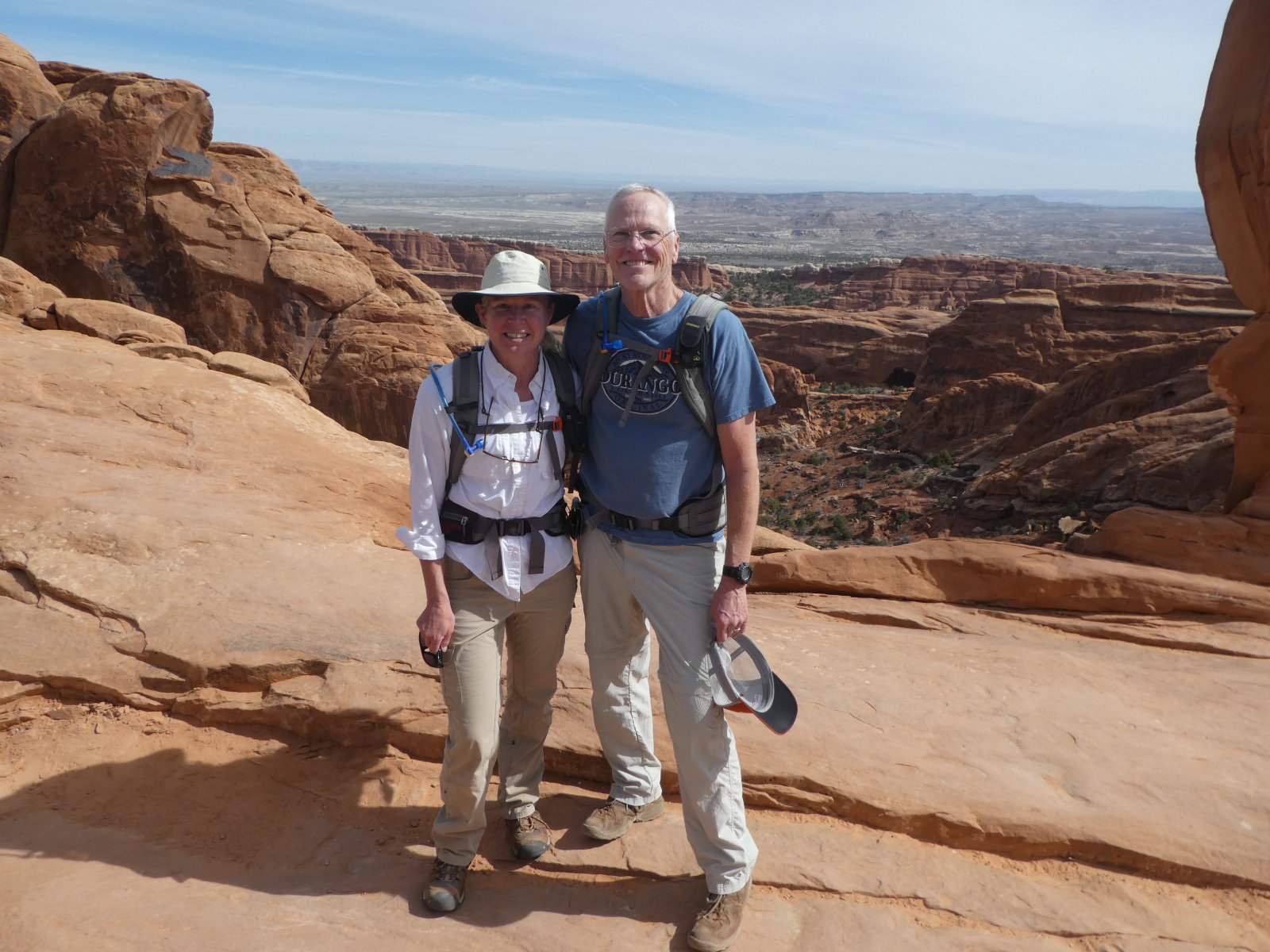 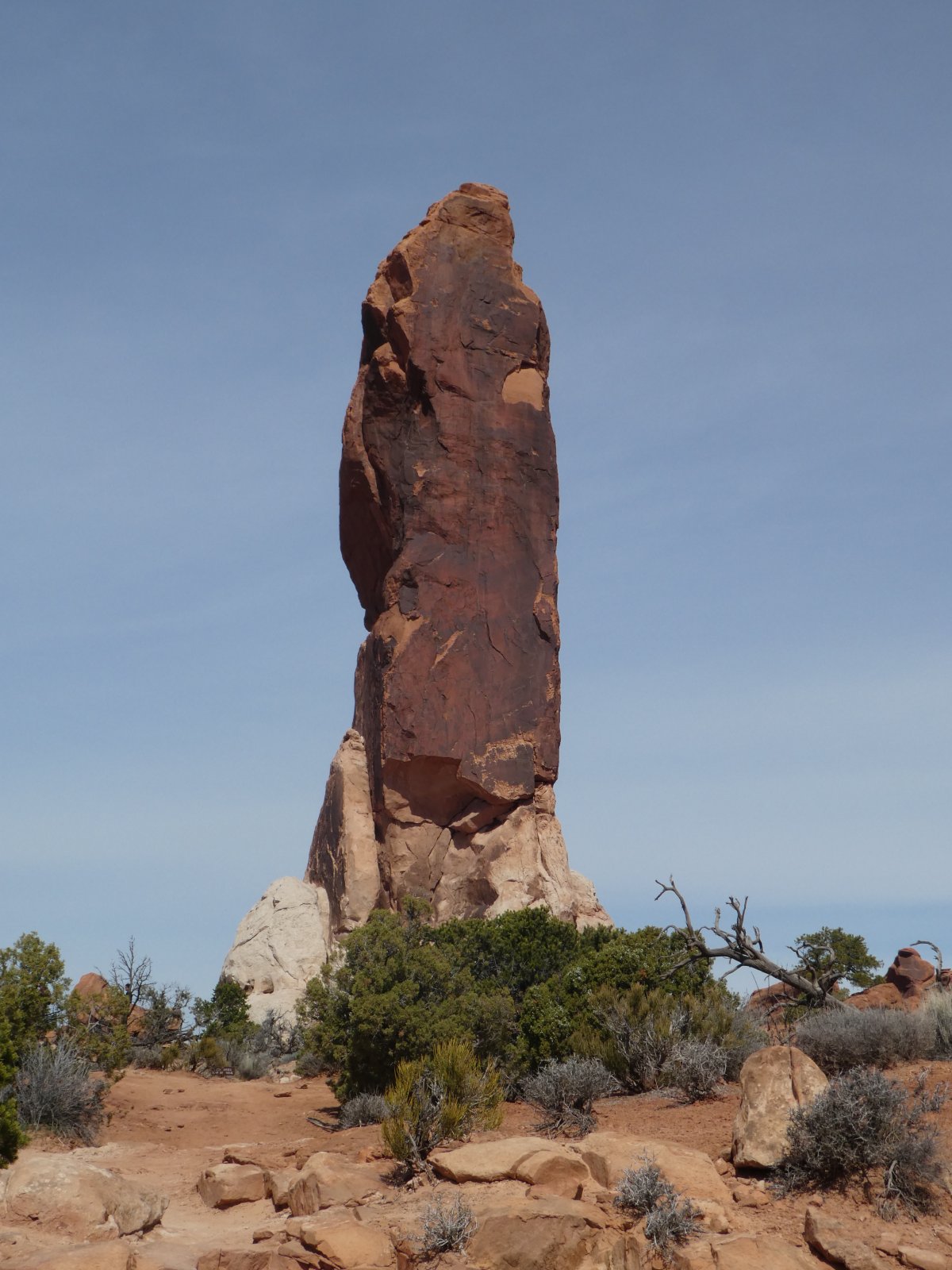 Unique things to see during the hike: 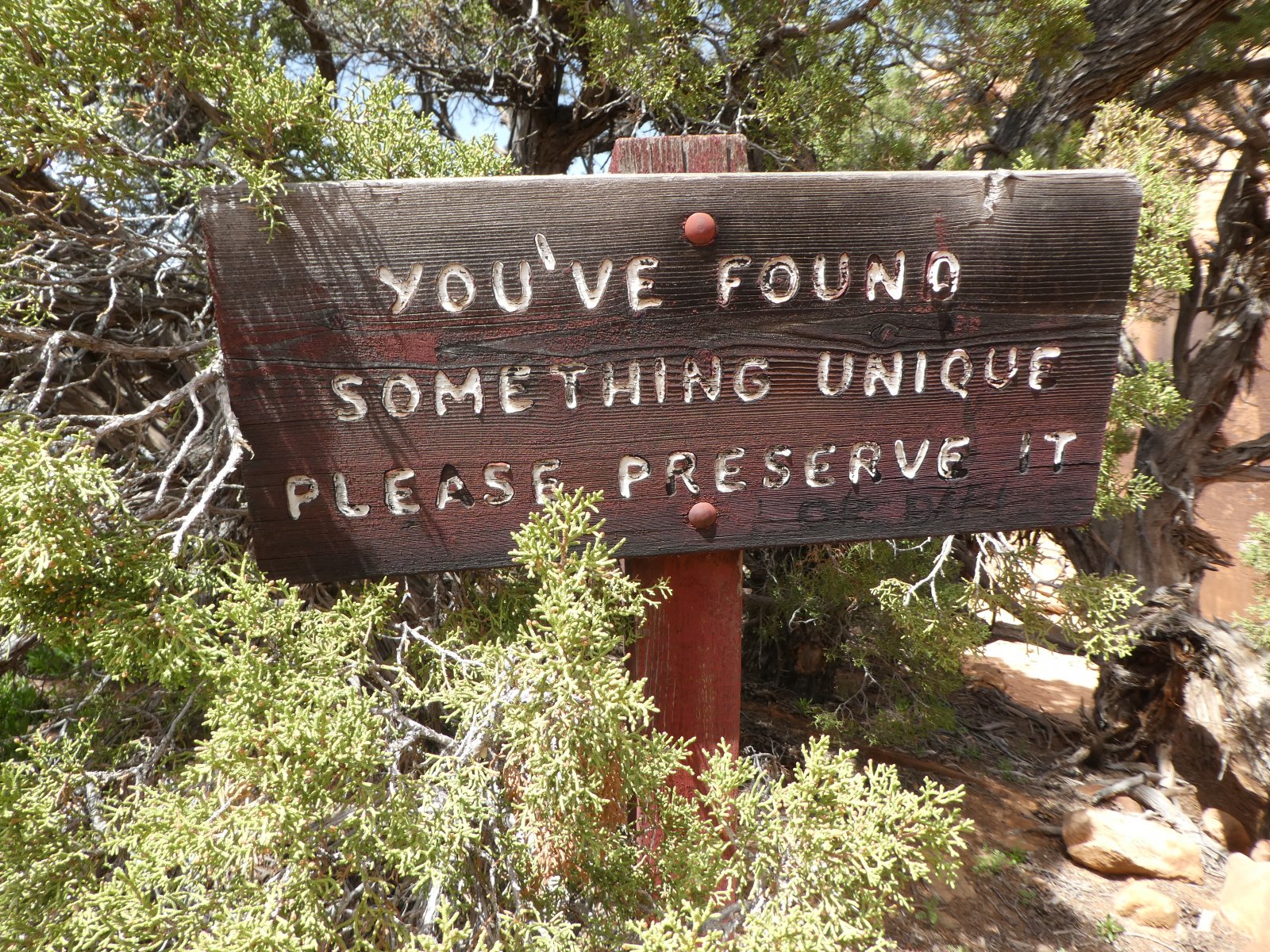 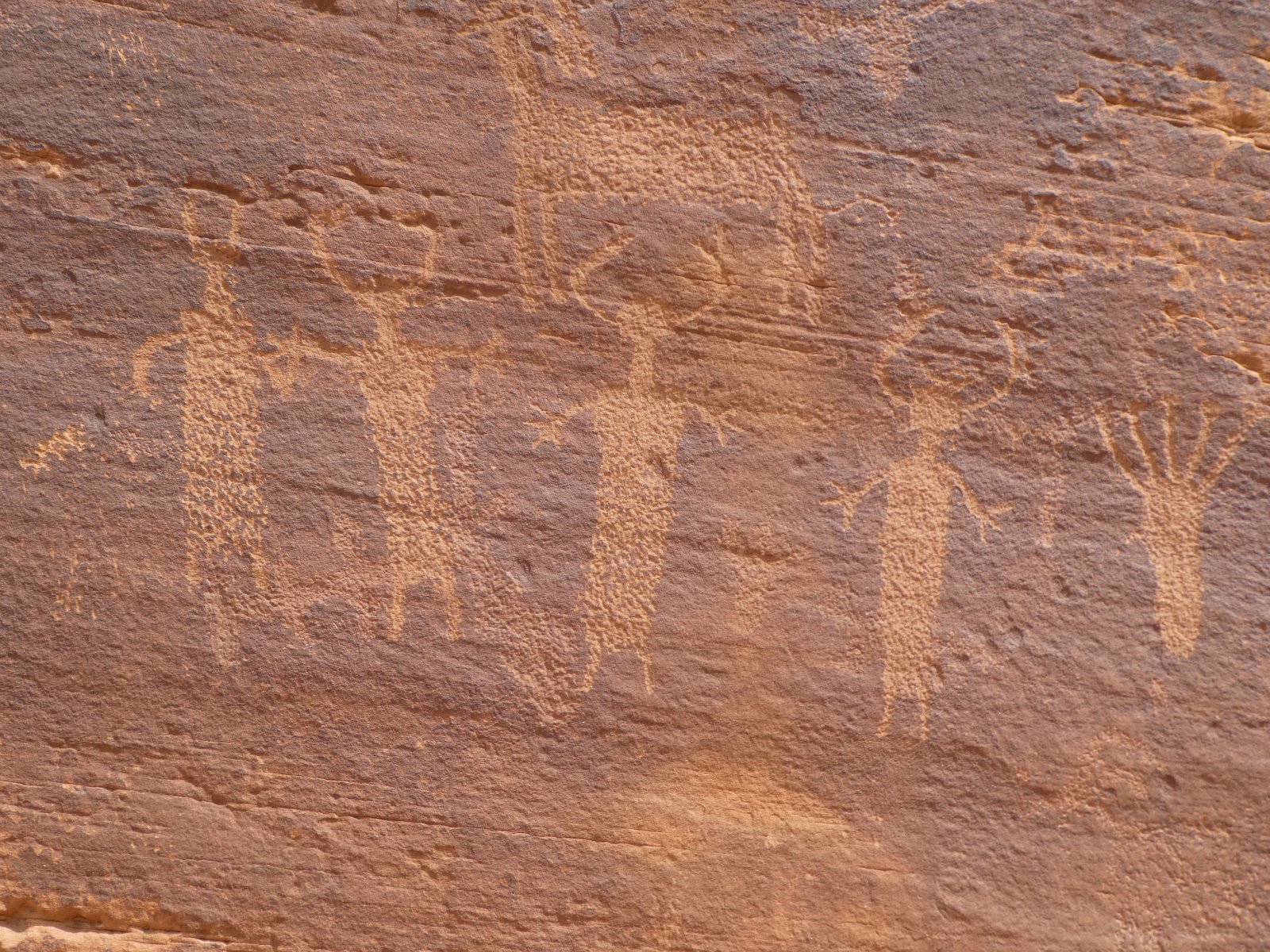 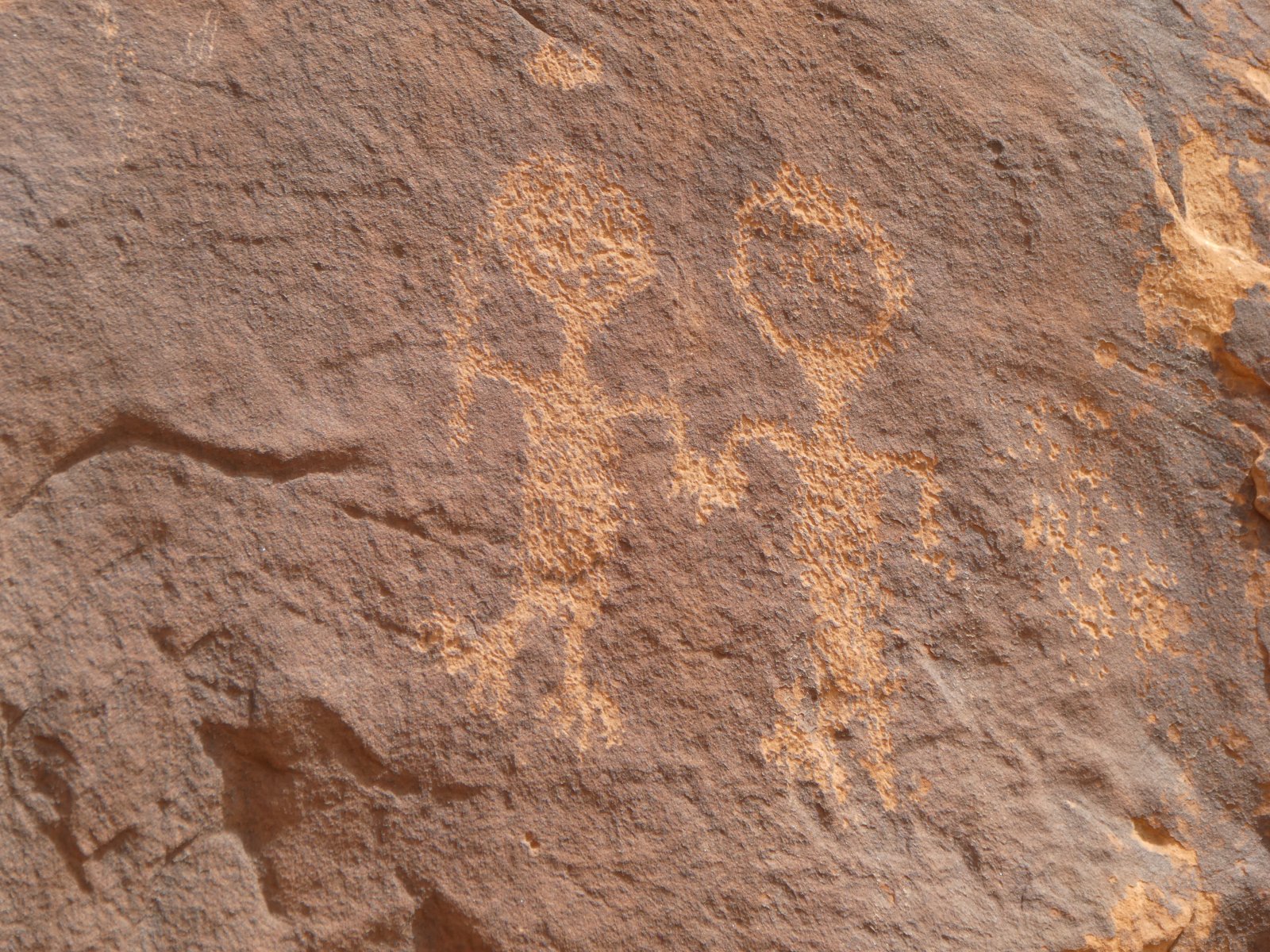 Glyph-hunting included, we hiked 5.9 miles (out and back), with 420 feet of elevation gain (don't know the AEG), and it took us 3 hours (including occasionally waiting for a break in the crowds to continue hiking).

All-in-all, a most pleasant trip despite the throng of Spring Break.

Great TR, thanks for sharing! We love the sign "you found something unique, please preserve it", it's such a special place and so peaceful. Have you ever hiked to the very cool arch in the in family photo? Thanks for the tip about the shower- I think Rick started the "Turkey trot" run from there 2 years back (he gave away his frozen turkey to a local family with kids). I'm very impressed with your rappelling in U-turn canyon, beautiful area.

Great trip report and nice to see some info on U-turn canyon. It has been on my list for a few years but I have just never gotten around to it.

Great trip report and nice to see some info on U-turn canyon. It has been on my list for a few years but I have just never gotten around to it.
You must log in or register to reply here.
Similar threads