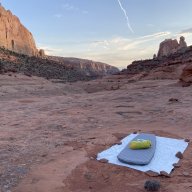 I couldn't fully understand how a lake disappeared, but I guess erosion allowed it to drain?
I did 5 nights off trail in the southern part of the wilderness in late August. The parts I'd been to before looked the same, but much of the route was new to me. Because bridges were out and almost nobody was doing the Beaten Path, there were only a handful of out-and-back fisherman on trail and nobody was seen off-trail. There was a late-season wildflower explosion and a bit more residual snow. I saw wolverine scat (I think) in the exact spot Joey once filmed 3 wolverines simultaneously, so that was exciting.