A couple has recruited me to organize and "lead" their first backpacking trip. They insist on BANFF and surrounding areas, which is fine by me, as I've never been there before. They wanted to do a 1 night trip, but I've convinced them a 3-nighter is going to give them a better overall experience.

Looking at a few itineraries, but would love some advice. These are very fit people (much more than me!) with a lot of hiking experience, but just no overnights. I'm thinking 10-12 miles (16 - 19KM) per day, maybe less or more depending on elevation changes. Below are some trips that I'm considering, but would appreciate any insight or other suggestions.

I posted a similar thread earlier this year but didn't really hear from anyone. Hopefully this one works better! I know we have at least a few people on here who frequent those areas.

Unfortunately, my trip didn't end up working out, so I don't have any experience in the area.
However, in my own research, I came across a few areas in Banff that seem like they'd be worth recommending.
The Skoki Lakes area looks awesome. It was high on my list.
Devon Lakes was another very interesting one, but that may be too long of a trip since it's fairly remote. Could possibly be made shorter if you're willing to go off-trail over a pass. It seems like you'd have big-time solitude over there though.

Here's my trip report from our trip to that area: http://outsidebynature.com/main/banff-jasper/

We enjoyed the Skyline Trail.

But this was the only time we've been there, so I don't have a lot of good advice. Remember that the backcountry campsites are group sites, much like in Glacier, so you won't have the site to yourself.

10-12 miles per day sounds a little optimistic...a lot of people do those kinds of miles, but a lot of people (me) usually don't. I'm often more comfortable with 8-10 mile days.
V

Berg Lake. I've been twice. First time we spent the night at Whitehorn campsite which is at the base of the climb up to Berg Lake. The second time I hiked to the Berg Lake campsite in a day. It all depends on when you start hiking. Mt. Robson is humbling. Truly a Himalayan scale mountain. There are day hiking opportunities around the Berg Lake campground. Make reservations for sure!
It seems to me that a group of fit hikers could take in the Rockwall in 2 nights and the Berg Lake in 1 night. 2 nights each would be perfect. If you're going that far, don't rush. Allow weather days.
Have fun. I'm envious.
Wayne

Look up the Great Divide trail......You will fill info on trail sections.....on my radar for quite a few years
' Not All Who Wander Are Lost '

Bob said:
Look up the Great Divide trail......You will fill info on trail sections.....on my radar for quite a few years
Click to expand...

Good luck to you. Tell us all about it.
Wayne 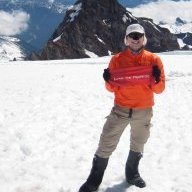 We were in the area mid-September this year. We didn't make it up to Berg Lake this time, but instead hiked into Mt Assiniboine/Lake Magog from the Sunshine Meadows ski resort trail head. If you consider doing THAT, I can share our original itinerary and experience.

For more information, I can highly recommend the book, "Don't Waste Your Time in the Canadian Rockies".

If you are looking for trail maps, skip the Trails Illustrated ones sold in the U.S. Order the Gem Trek Publishing maps instead. They are much better and more accurate.

I believe the Rockwall Highline is part of the Great Divide trail. Have had others recommend that book, so will pick it up.

jjmcwill said:
We were in the area mid-September this year. We didn't make it up to Berg Lake this time, but instead hiked into Mt Assiniboine/Lake Magog from the Sunshine Meadows ski resort trail head. If you consider doing THAT, I can share our original itinerary and experience.
Click to expand...

This is one of the trips that we're considering. The Lake Magog area looks really crowded, which is one of the reasons it's not on the top of my list, but the area looks gorgeous. Did you do it as an out-and-back or through hike? Helicopter ride in or out?

We did it a an out and back.

Our original itinerary was:

There were originally 6 of us going. 1 bailed before we ever boarded the plane to Calgary. The two girls bailed the morning we were supposed to catch the shuttle up to the trail head. We had been car camping for 3 nights up near Athabasca Glacier & Kicking Horse and doing day hikes, and had been dealing with a lot of cold weather, rain, and some snow/sleet. They had enough, and didn't want 6 days of being cold on the trail.

That left three of us guys to hit the trail.

On day 1 there was snow on the ground and signs of active grizzly activity around Howard Douglas Lake.
We were worried we would lose the trail, but it remained clearly visible. The snow disappeared after we crossed Citadel Pass and descended toward Porcupine Meadows. Porcupine Meadows has little to recommend it besides a moderate distance from the trail head. It's a steep descent off the main trail heading toward Og & Magog, and there are no views down there. It's also a steep climb back up to the main trail again. We decided that on the return, we would not go back.

Magog Lake was busy as you say, but there are a lot of camp sites. The bear lockers and cook shelter were nice conveniences.

Ted was having a lot of trouble with his knee due to the steep climb down to Porcupine and back out, and we decided he wasn't going to enjoy the long route over Marvel and back up the Bryant Creek Valley. I really didn't have the heart to make him suffer, even though I felt he had been overly optimistic about his knee condition going into the trip.

So when we left Magog on day 4, we hiked to Og Lake. Day 5 we hiked to Howard Douglas Lake (securing a permit change from Banff via my Delorme InReach and wife who coordinated comms). On the way to Howard Douglas lake we met a grizzly about 70 yards away during a water stop. Fortunately, the bear wasn't interested in having a confrontation, so we went our separate ways without incident.

Day 6 we did the very short hike from Howard Douglas back to the trail head.

We actually had five days of excellent weather. We had some cold nights, but sun shine days. On the last day, winds and "wintry mix" accompanied us on our hike back out.

There were many hikers flying in to the Assiniboine lodge and camping. It was fascinating to watch these people at the cook shelter and see how much heavy gear they had. My two guy companions didn't mind being so close to the lodge once they learned that they could buy beer and wine between 4pm and 5pm and sit on the front porch drinking. Wasn't my thing, but it made them happy. I had cake and a coke, which made me happy!

Mt Assiniboine and the hike up to the nublet had terrific views. If I had to do it again, I'd hike straight from Sunshine to Og Lake on Day 1, and try to stick to the original plan of going over Marvel pass and looping back up Bryant Creek valley and out again. Maybe I'd pick McBride's instead of Allenby Junction for the night down in the valley. I read online later that it seemed to be a better location.

Howard Douglas Lake was a nice spot to stop, even though it was only 4 miles away from the "end".

We paid to do the 5 1/2 hour guided group hike up the Athabasca glacier. It was worth it. I'd been on glaciers before but others in our party had not. Don't go to the Columbia Icefield VIsitor Center though. That place is a crazy zoo.

So, too is Moraine Lake near Lake Louise. We did the Sentinel Pass day hike there regardless, because I really wanted to see Valley of the Ten Peaks.

i liked the Iceline trail in Yoho a lot better than the Rockwall.

the Skyline was likewise fantastic. i also hiked the Rockwall and the Skoki Lakes while i was up there, but haven't written reports. they were both quite nice, as every thing seems to be there, but not so exceptional as the others i've linked. the Rockwall had some great moments, Floe Lake in particular, but, for me, the trail spent too much time going up and down in the trees, not very exciting.

I need to break out my maps and check this out.
What is your best guess of distance and number of nights?
Which park or parks?
Have a great trip!
Wayne

Looking forward to seeing that trip report! Sounds like an awesome route.

Venchka said:
I need to break out my maps and check this out.
What is your best guess of distance and number of nights?
Which park or parks?
Have a great trip!
Wayne
Sent from my iPhone using Tapatalk
Click to expand...

Best guess for distance is somewhere in the 48-52 mile range. We're going to attempt in 4 days/3 nights, but will be prepared for an additional night if necessary. Day 1 and 4 will see the most elevation gain, but 2-3 are flat or downhill.

All entirely in BANFF, though we'll be near Yoho NP and Siffluer national forest.

I like this route since a very large chunk is in high alpine area above tree line. First couple miles will be in the forest, and a chunk of day 3 in the Siffleur Valley will be as well, but the rest of the trip appears to have wide, expansive views all around. Hoping permits won't be as big of an issue since this route is not as heavily trafficked compared to many others. There is only one established campsite on the route (Fish Lakes).
V

Thanks for the details. Sounds like a winner.
All the best to you all.
Wayne

Finally did this trip in late August and will put together a trip report. Weather and swampy trail conditions resulted in an out-and-back instead of the planned "loop". The Pipestone Highline trail was phenomenal; really, the entire trip after mile 6 was incredible.
You must log in or register to reply here.