I've been really busy backpacking this summer so I haven't had time to post here as often as I'd like. This is a trip I did in late june to help me physically prepare for an 8-day mountaineering Bailey Range Traverse in ONP which I completed successfully two-ish weeks ago. I'll be releasing a feature-length film of that adventure later in the year once I get through my video backlog (I got videos to do about the Winds, Idaho's Lost River Range, more Chelan-Sawtooth videos, OlympicNP and Eagle Cap/Wallowas)...

Anyways, for this trip I loaded my pack up to about 60lbs to get used to carrying a heavy load / mountaineering gear. It was really hot out which helped the misery. It was originally going to be a 3 day 2 night that just turned to an overnight with a long day 2. Day 1 was to Copper Glance lake. On my way up I scared a massive cinammon colored black bear who took off running FAST. Only one other person camping at the lake, it was quiet and pure bliss there. The isabella range towered over the lake. I did some recon that evening of my snow chute I (thought) I had to go up and over to get to the cross country / off trail area of No Dice Lake which would be Night 2 of my trip. It rained a bit on night 1 but not too bad. Tons of fish in the lake. Some mosquitoes no where near as bad as the Winds though.

Copper Glance lake and my snow chute for Day 2 on the left. Larches everywhere. 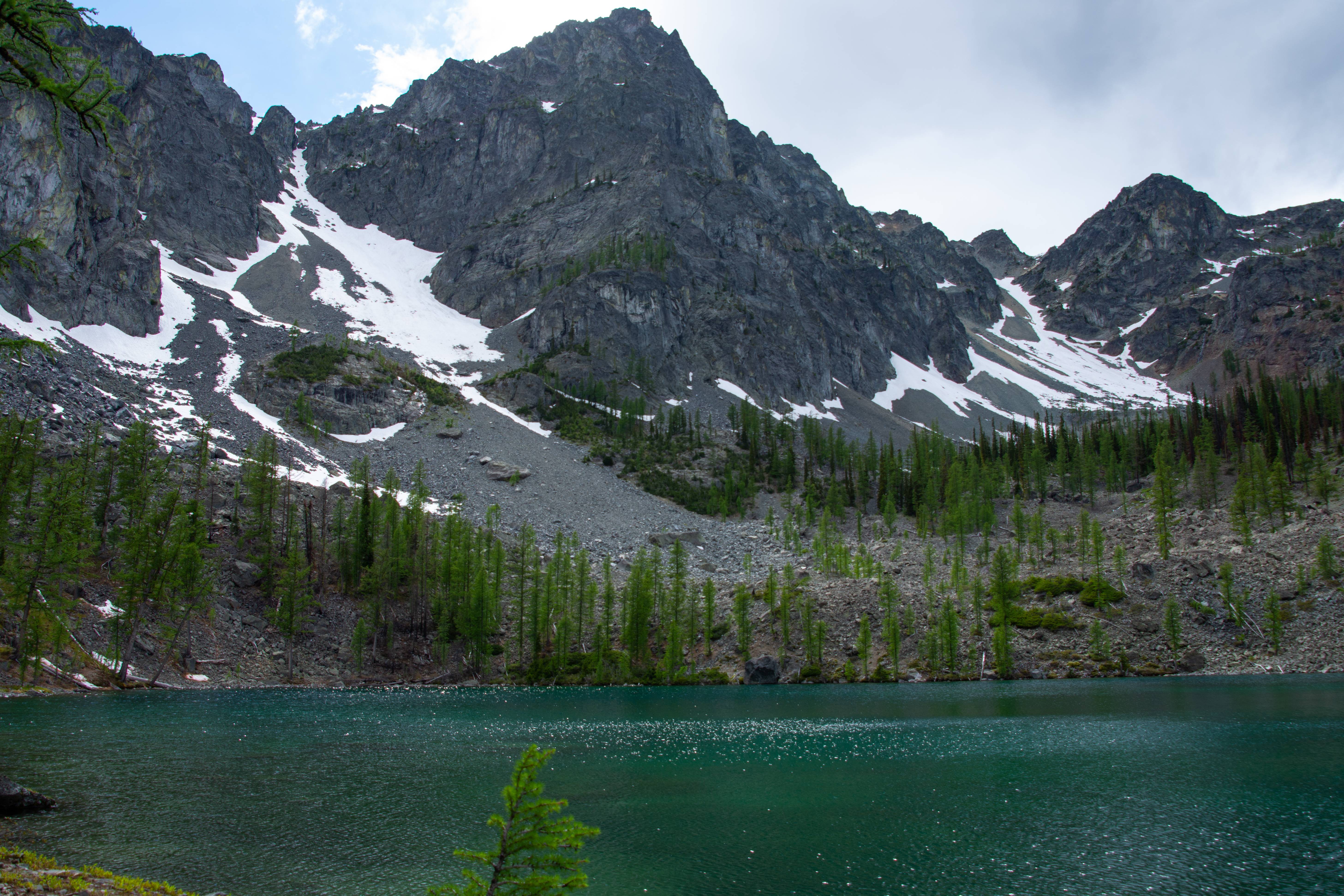 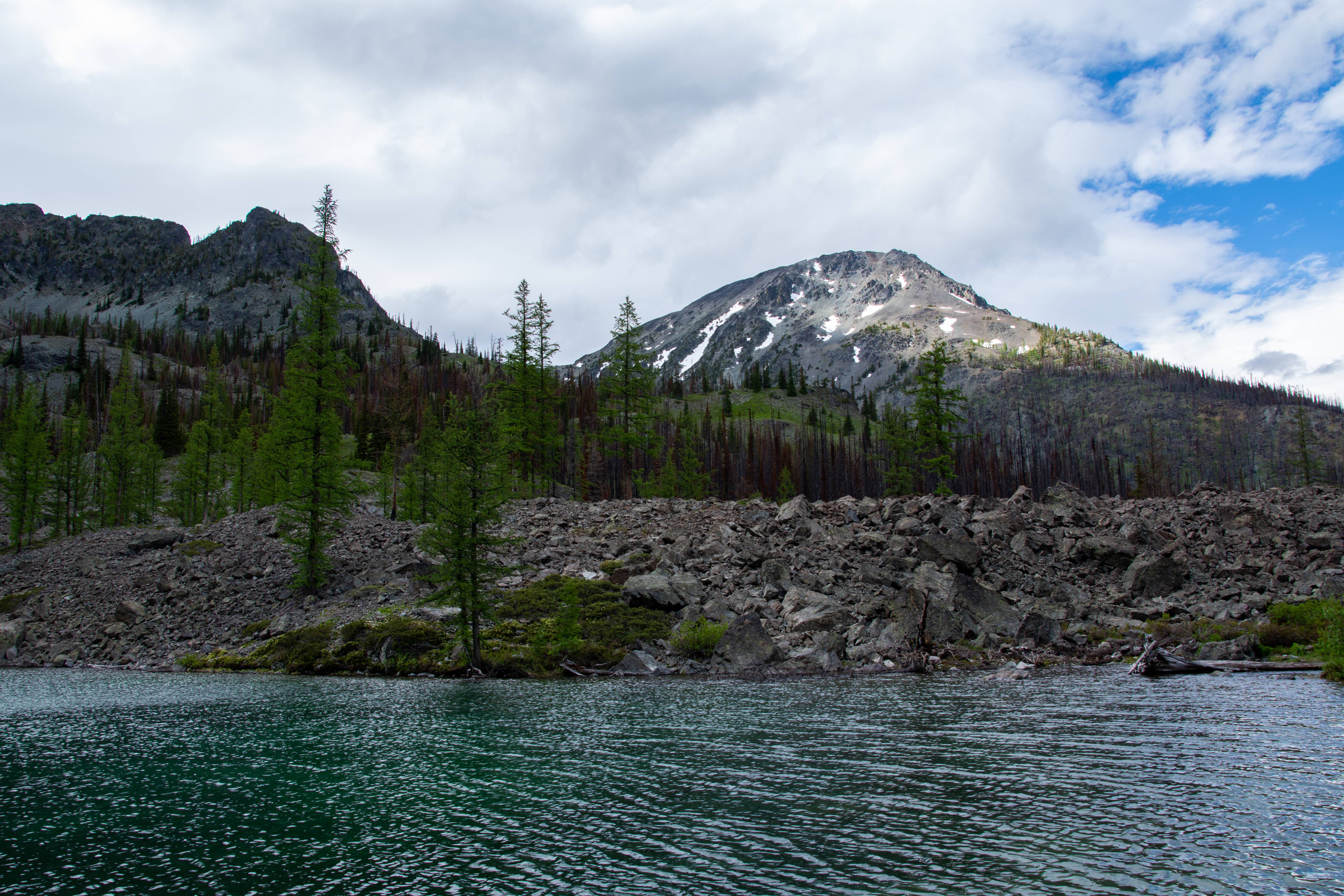 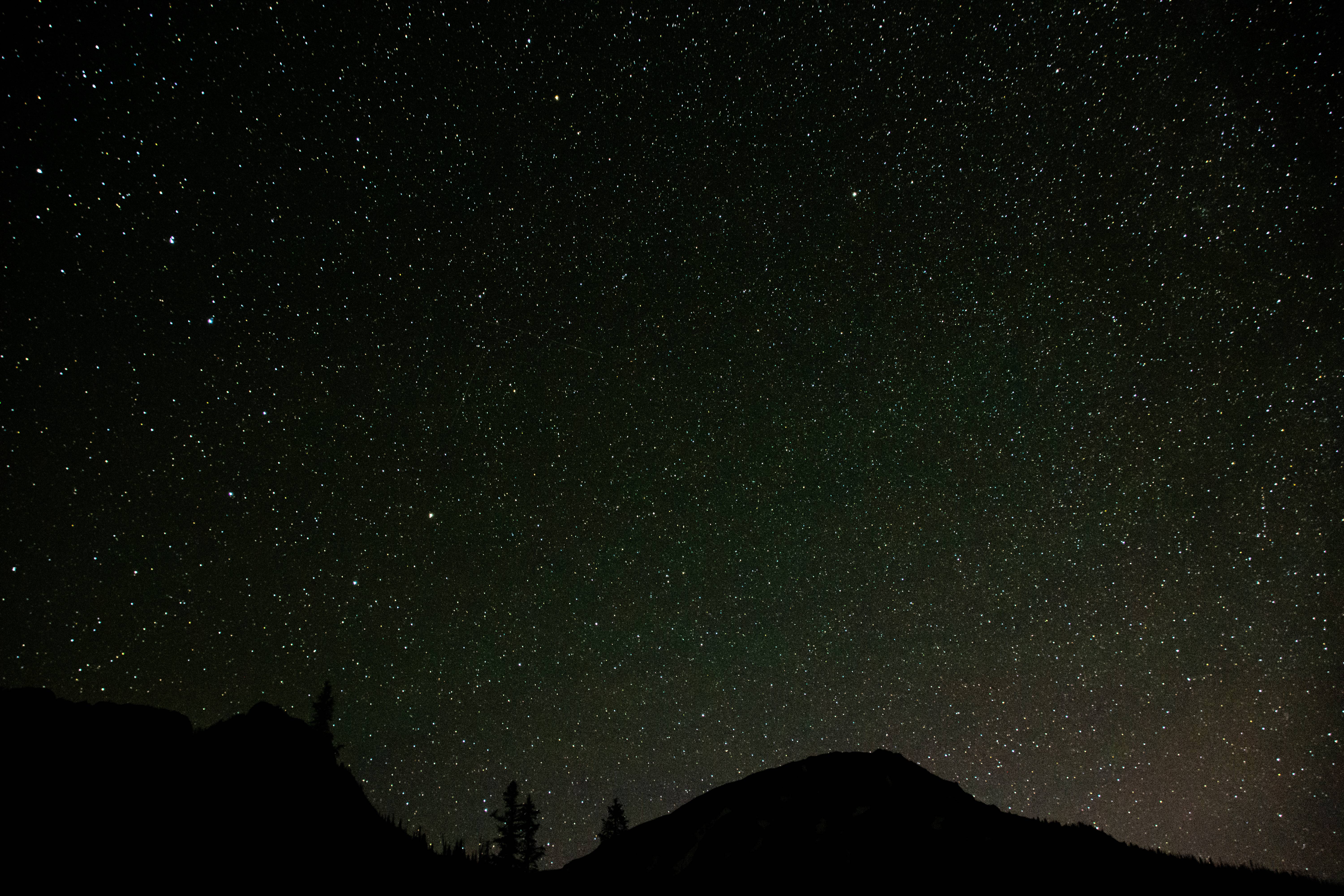 Day 2 I set off up the steep snow chute with my ice axe, crampons and 60lbs pack. Going up close to 2000ft elevation in 1 mile, most of it being the last .25 miles. It was hot and pretty exhausting up to the col as I was still a little out of shape. When I got up past the snow slope I put my pack on some rocks and went the last 200 feet uphill on very loose and rotten rock to check out the col and to finally see No Dice Lake with my own eyes. Turns out I read the map wrong because when I crested the col I was greeted with a rotten drop and instead of seeing No Dice Lake I was looking straight into the heart of the Pasayten Wilderness. Peaks like Nanny Goat, Billy Goat, Lost, Many Trails, Lago, Ptargmigan, Three Pinnacles North and Monument Peak. A massive gust of wind hit my face as if the range was laughing at my failure in misreading a simple contour map. I was one chute over too far. To get to the correct chute I had to lose all 2000ft again down the steep snowfield and go back up the right one. I couldn't traverse over due to rotten rock and needing actual rock climbing equipment due to the rock towers. It was beautiful though as crushing as it was. The clouds looked bad in the distance, looked like thunderstorms. I began my descent down the steep snow field. I slipped on the upper portion and had to self-arrest with my ice axe. Which I did successfully, huge confidence booster. The down climb of the steep field was worse than the ascent, especially knowing 80% of all climbing accidents happen on the descent. I finally made it down to the skree field and I was exhausted. I saw the chute I needed to take. It had no snow and was all rotten rock. I was tired as hell and felt defeated, so I chalked it up to a loss and vow to return another time. 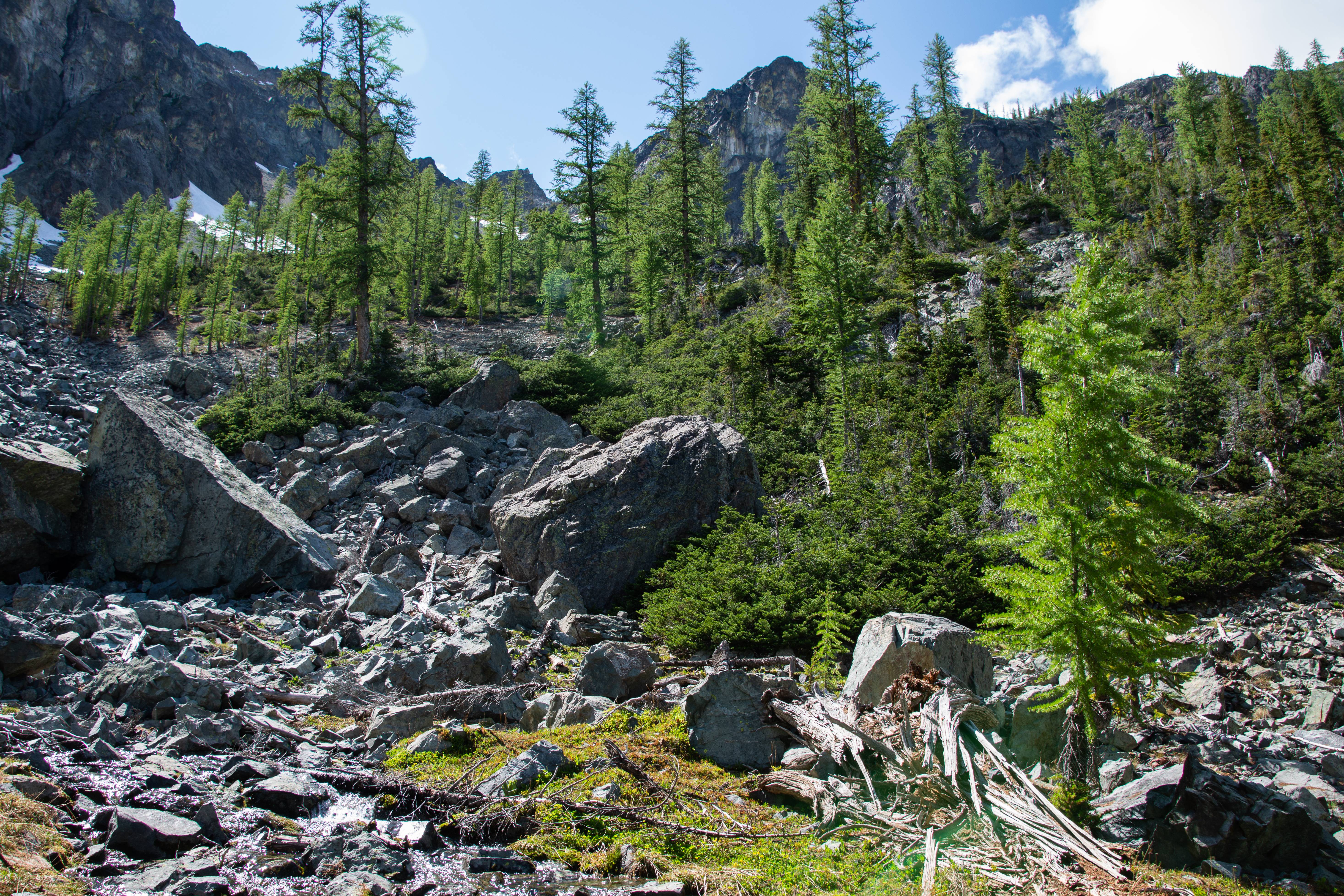 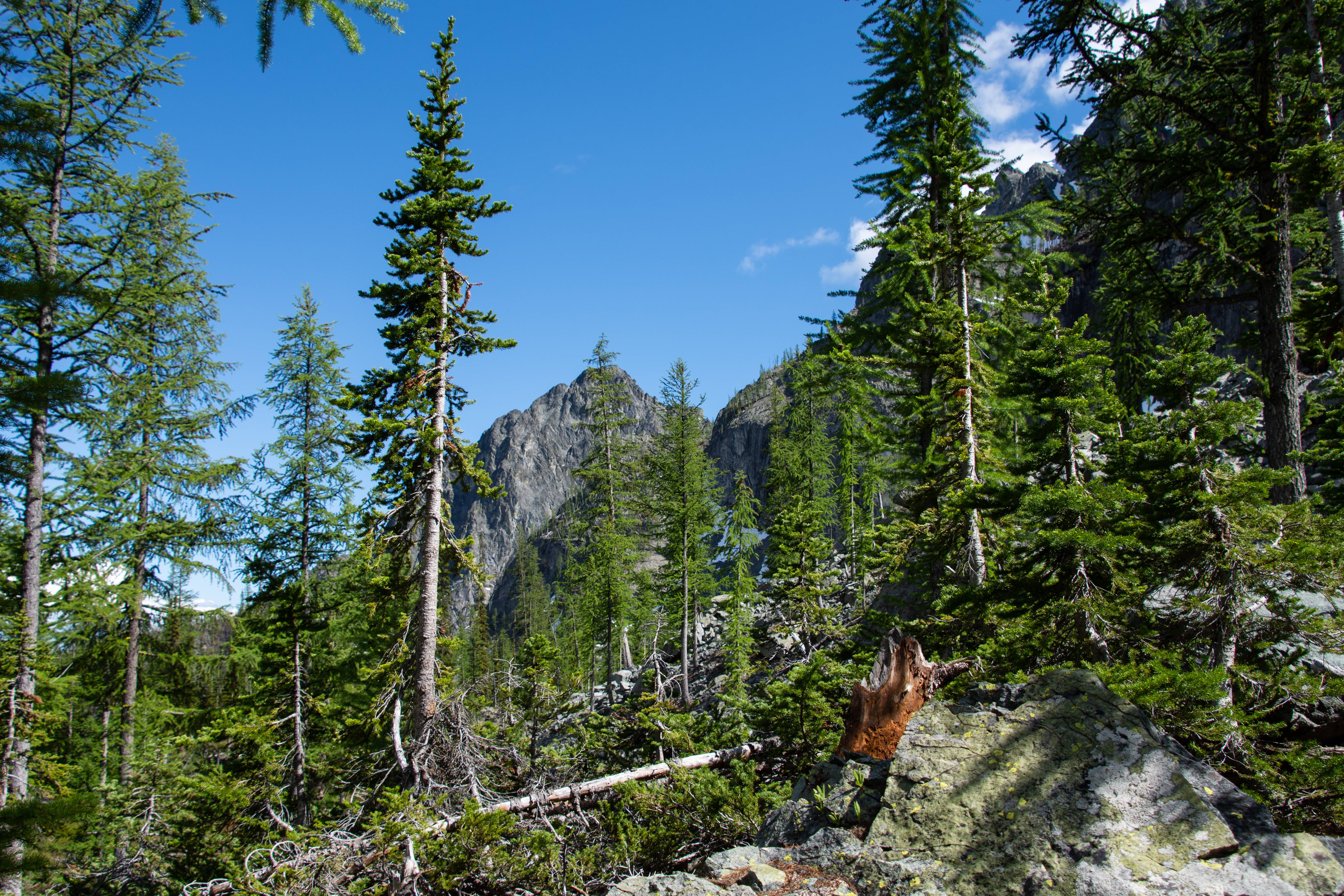 Scramble to the snowfield. 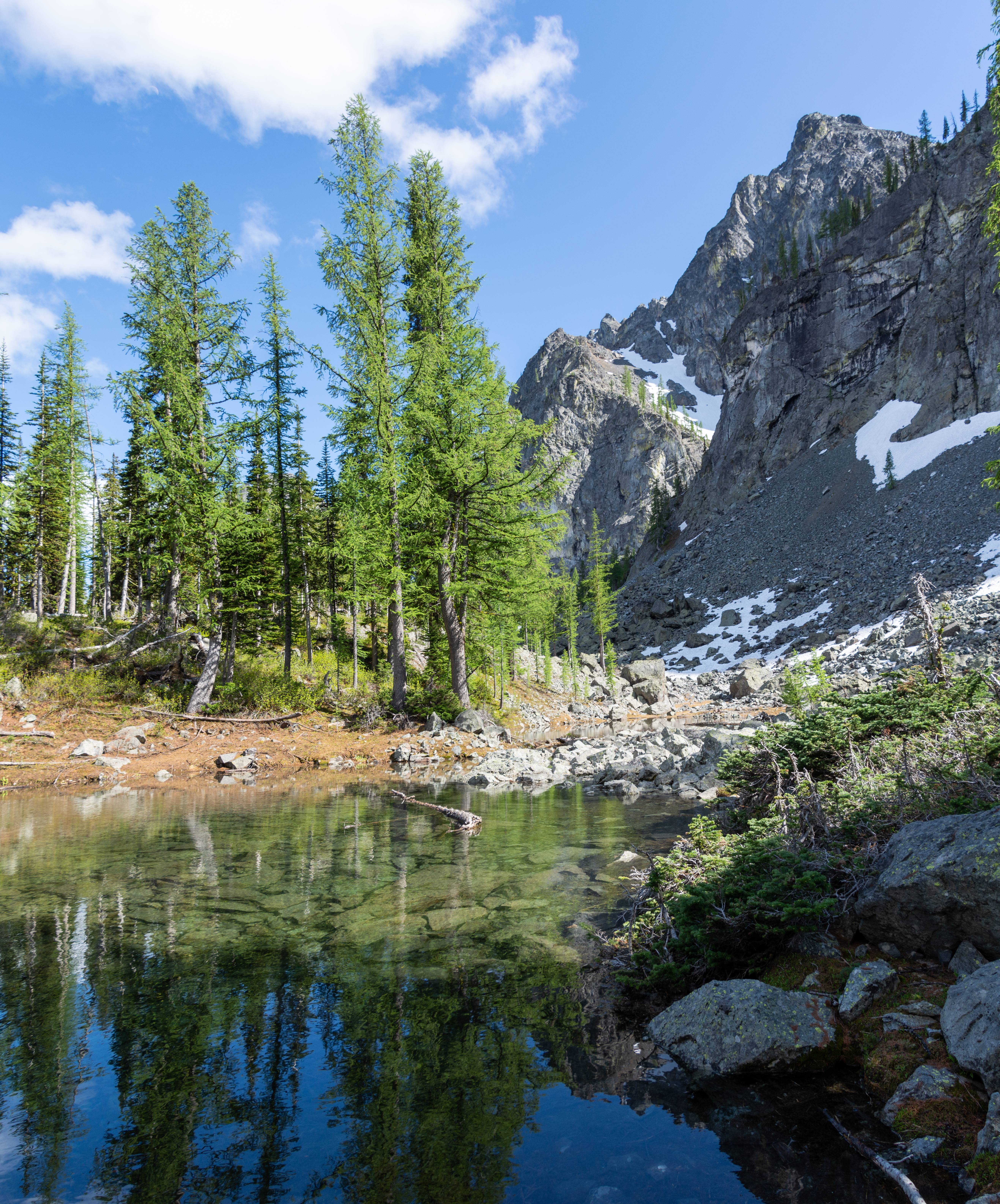 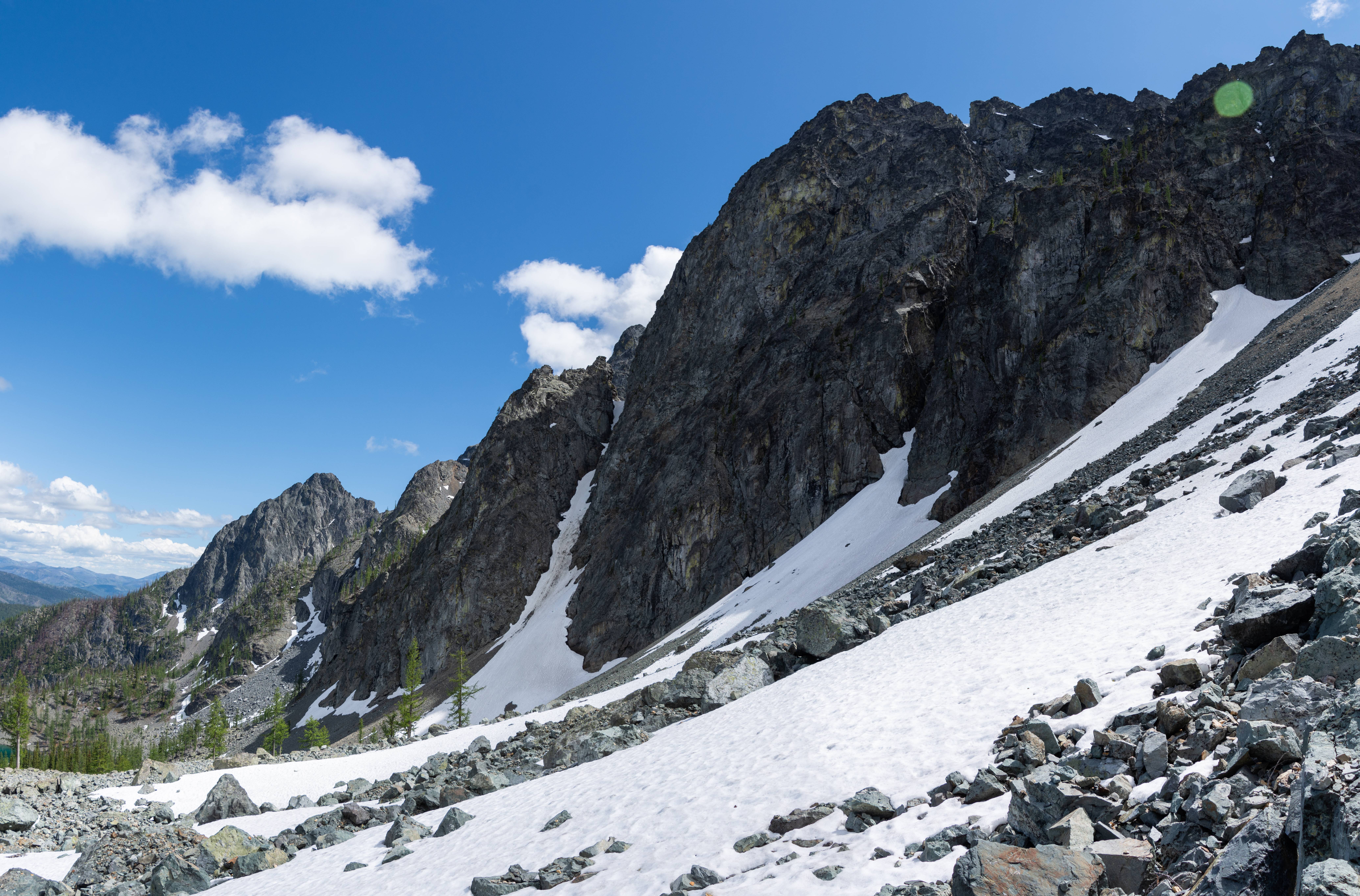 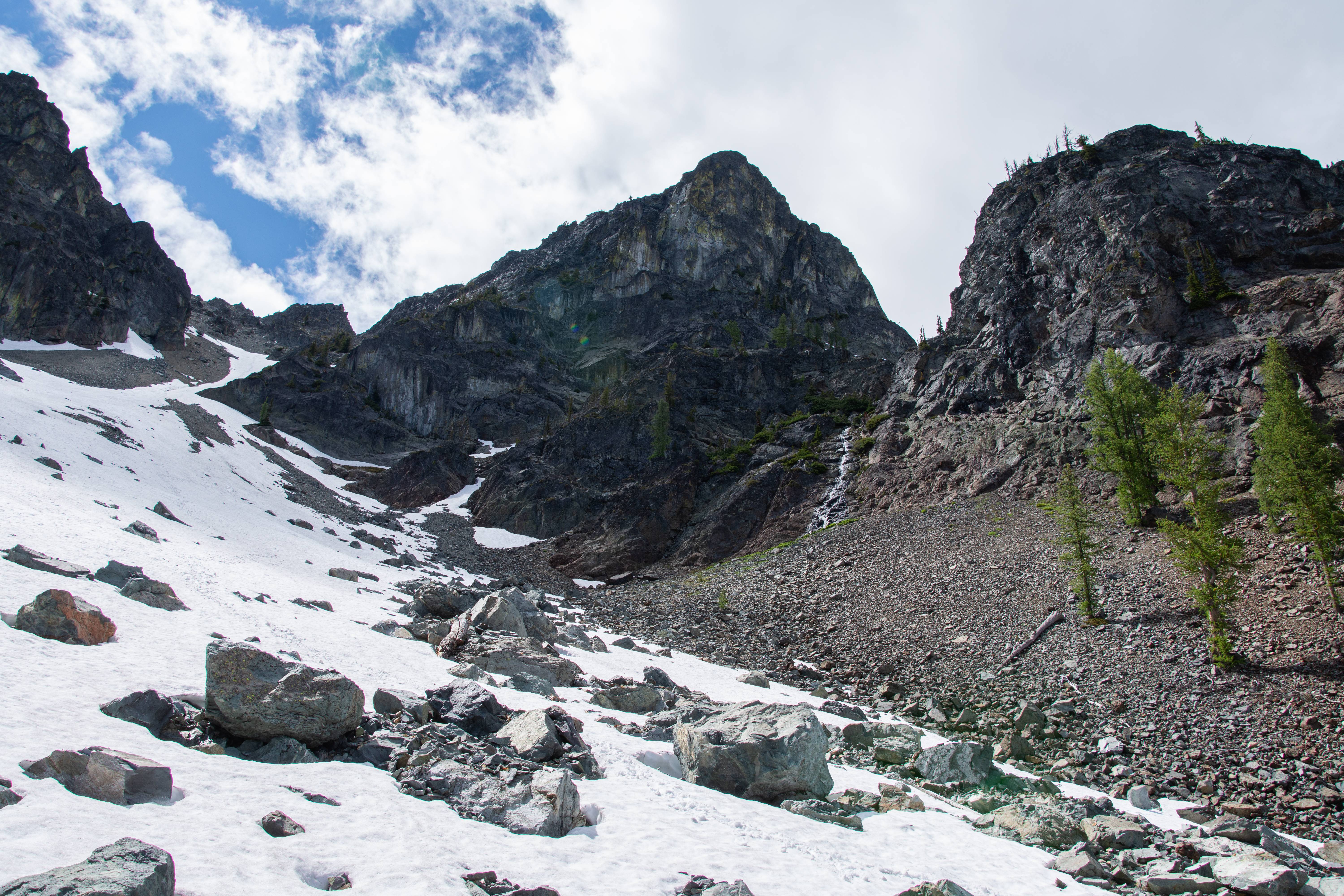 My goal was to follow the snow the whole way up left.

I went back to Copper Glance Lake to camp another night there. I started hearing big booms and Lacey messaged me on my SAT messenger. She was just leaving her dad's place with her friend in Mazama (about 10ish miles south west of me), her message read that Mazama was getting smoked by a massive lighting and thunder storm and it was probably headed my way, it was also being forecasted to go on until noon of Day 3. I ended up hiking out the 5ish miles as fast as I could. Dropping elevation fast. Booms going off like crazy in the distance, almost as if there was a boom noise every 2 seconds. The last mile the thunder just stopped and the skies started to clear. When I got to my truck there wasn't a cloud left. Are you fucking kidding me? Mother nature made a fool of me twice on this trip! OH well, I saw some cool stuff and got one hell of a workout. Back to the drawing board. 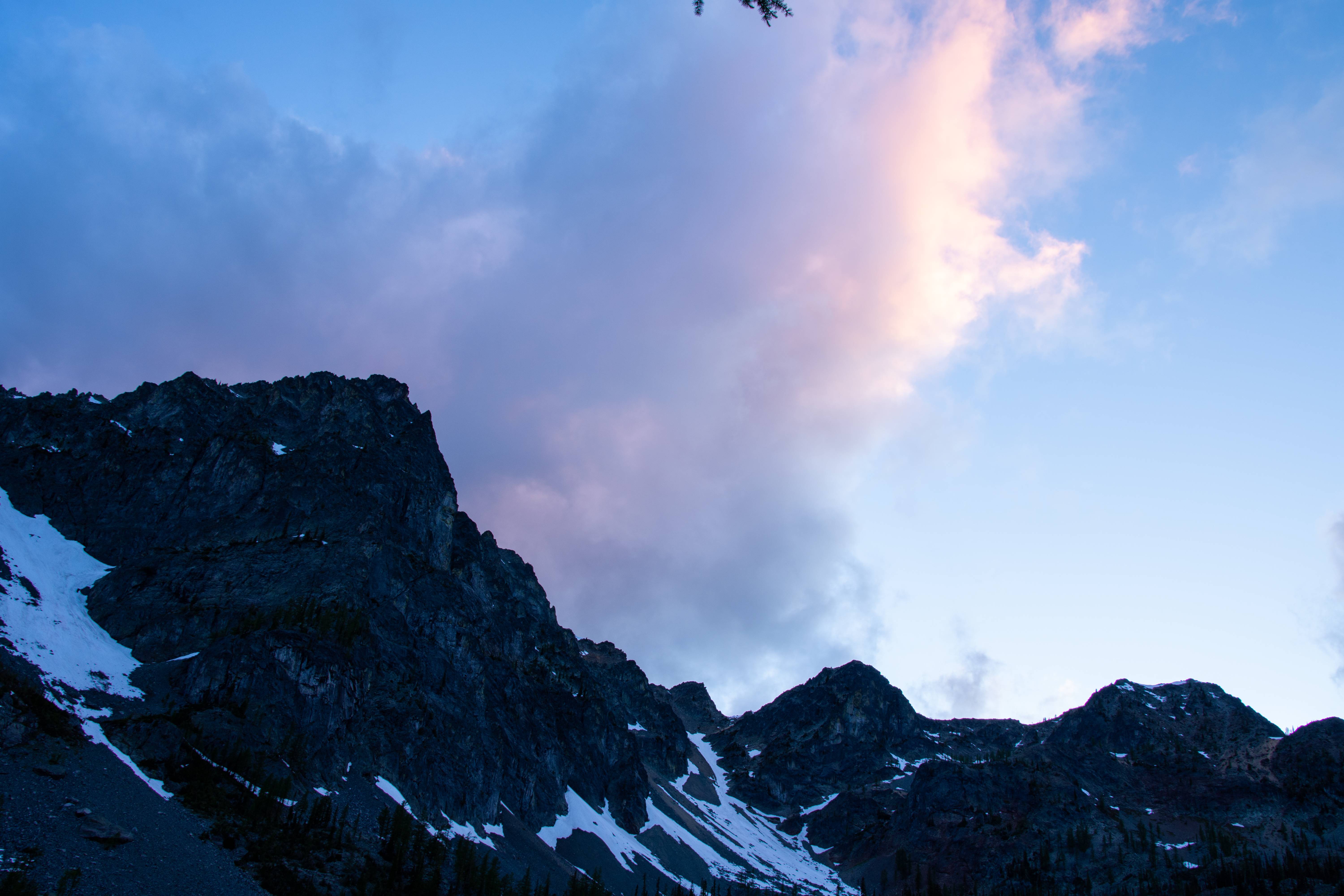 
NorthwestWanderer said:
Turns out I read the map wrong
Click to expand...

I hate that. Seems I do it more and more lately.

Good to get out there and learn lessons! Haha and hopefully you agree that that last photo of the soft clouds and pink lighting made it aaaallllll worth it! Thanks for sharing!
You must log in or register to reply here.
Similar threads