My brother and I are going to take a trip in late mid or late April to one of the National Parks.

The plan right now is going to do 3, maybe 4 nights. I'm leaning towards Yellowstone, however, with the exception of the length and the timing, we're working with a blank canvas.

We would like to spend our time hiking and nature watching. Maybe a little fishing and maybe a few random adventures and some site setting sprinkled in throughout the day. We're open to backcountry or front country camping. We'll have a car. Given all of this and the time of year, I'm thinking Yellowstone might be a good choice.

What do you all think? If Yellowstone doesn't sound like the right place to suit our needs, please recommend some others.

April is pretty early for getting into Yellowstone.

2018 Spring Opening Dates
Conditions permitting, roads will open at 8:00 am on the following dates:

Nearly anywhere mountainous in the western US is going to be very snowy in April. Many trailheads won't be accessible, and to be backpacking, you'd need to be on snowshoes or skis.


For snow-free hiking and camping in April, head south. Grand Canyon, Zion, Canyonlands and the like. If you want to go to the mountains, July-September is the best time.
D

Thanks. That's weird to see because I know Yellowstone can get quite crowded, and I read a bunch of articles that said April and May is the best time to visit to avoid the crowds. Hard to visit a place when 90% of their roads are shutdown.

Ok well I guess Yellowstone is out. I did Canyonlands last year and had an absolute blast, but I would rather try something else for the next trip.

What about Grand Teton? Or will I just run into the same access problems? Kings Canyon and Sequoia could be pretty cool too. Like I said....we're working with pretty much a blank canvas.
D

I should mention that the Canyonlands trip last year was PERFECT. Hiked into CP1 and used that as our base camp for the next 3 nights. Then ventured out on different hikes each day. Something like that would be ideal for this trip too...

April is a fine time to be in the desert...
IG: @backcountrypost

Jackson said:
Nearly anywhere mountainous in the western US is going to be very snowy in April.
Click to expand...

I thought about that as I wrote that. Maybe it was evidence of wishful thinking on my part. (I have high hopes for the precipitation in our forecast!)

Looks like it's a fairly normal snow year in the GYE though!

Jackson said:
Looks like it's a fairly normal snow year in the GYE though!
Click to expand...

True that. In fact the snow model is showing many points north of the Windies being in decent shape. Dang jet stream is stuck flowing to the north over our persistent high pressure... 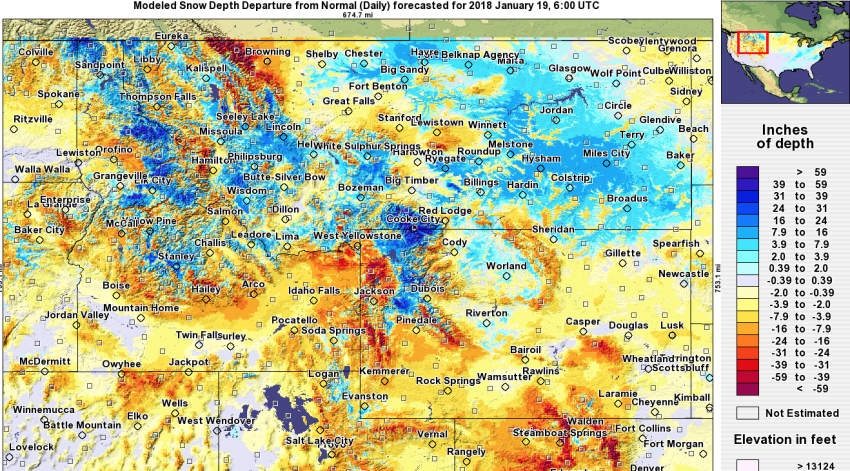 Still struggling over here trying to pin something down.

I think our preference would be to do some backcountry camping/hiking, but in a perfect world we land at one camp site and then use that as our base camp for the next 3-4 days. Being near multiple trail heads from camp would be ideal. That's how we did it in Canyonlands last year. The main reason for this is because it would be so much less taxing on our bodies.

We are also open to a multi day loop hike, however, if we're doing that we'll want water sources. Lugging around 3-4 days of water is not something we're interested in doing.

Any recommendations for this in late April or early May?

First trip advice is free, second one will cost you a TR.
IG: @backcountrypost

If things keep going as they are, even late April and early May are going to be really hot in the canyon country this year. I was in the Moab area one year when it was 85° in March. Not super hot, but hot enough that you want to carry more water, and it can slow you down. I've seen it in the 90s in early May.

If you decide you want to do some canyons anyway, I would consider the San Rafael Swell. It's 7000+ feet and is a little cooler than places like Canyonlands and Arches. A lot of it is accessible if you have good clearance, and there's a lot to see within reasonable distances. For example, you could go camping at the Wedge and be down in Buckhorn pretty quickly to go hiking. Same with all that country up around Swasey's cabin, then there's the Hondu Country and lots of other places. Might be a tad warm, but you could car camp and carry lots of water. Capitol Reef is also pretty close and a memorable destination in itself. You could easily spend months or the rest of your life (if you're lucky) in that country between Green River and Hanksville and Torrey.
Last edited: Jan 20, 2018
D

After further consideration, it's a toss up right now between Great Smoky Mountain or Yosemite. We've decided to allow for more planning and have pushed the departure off until July/August.

I've got two hiking/guidebooks coming. One for each NP. After a little more research I plan to put pick one and then zero in on our itinerary.

I was going to ask if you could delay until May, it would make a huge difference in the Yellowstone/Grand Teton region, at least in the front country. A July/August trip to Yellowstone can still be an awesome one. Spend a day or 2 in the park fighting crowds, then head to nearby wilderness areas to have the back country to (nearly) yourself.
P

The Smokys will be crowded, at least on the Appalachian Trail, at that time. There are other trails in the park, and you're as welcome in the fray as anyone, but on the AT, you won't be lonely.

Dustin Rand said:
After further consideration, it's a toss up right now between Great Smoky Mountain or Yosemite. We've decided to allow for more planning and have pushed the departure off until July/August.

I've got two hiking/guidebooks coming. One for each NP. After a little more research I plan to put pick one and then zero in on our itinerary.

I've spent quite a bit of time in the Smokies, let me know if you have any questions.

Wow. Very helpful. Looks like a great time.
You must log in or register to reply here.
Similar threads