A Winter's hike to Stewart Falls

Stewart Falls offers a short and relatively easy hike near Sundance Ski Resort and the BYU Aspen Grove Camp. As such, it is a very popular hike throughout the year. I had not been to these falls since I was a high school senior and ran to it as part of a summer trail run workout with my cross country team. Well over a decade later, I took an opportunity to make a return visit, only this time, it would be on the cusp of winter.

When I arrived at the trailhead, there were very few cars in the vicinity. It was a dramatic change from the crowds that fill it up all through the summer. The trailhead also serves up the Aspen Grove route up Mount Timpanogos.

The weather was fantastic with sunny blue skies. While there was quite a snowstorm that had come through days before, it was early in the season so the snow depths weren't too high yet and what was there had plenty of time to settle in making it so that any avalanche risk was low. As the snow typically piles on as the winter season progresses, the avalanche risk at select points along the trail to Stewart Falls and especially around the falls itself, increases significantly, especially in the hours and days immediately following a fresh layer of snow.

Excited to get back on a trail for the first time in over a month, I got my dog, Sophie, out and got on our way. Almost immediately after starting up the trail, I threw on my spikes. Let the winter beauty begin. 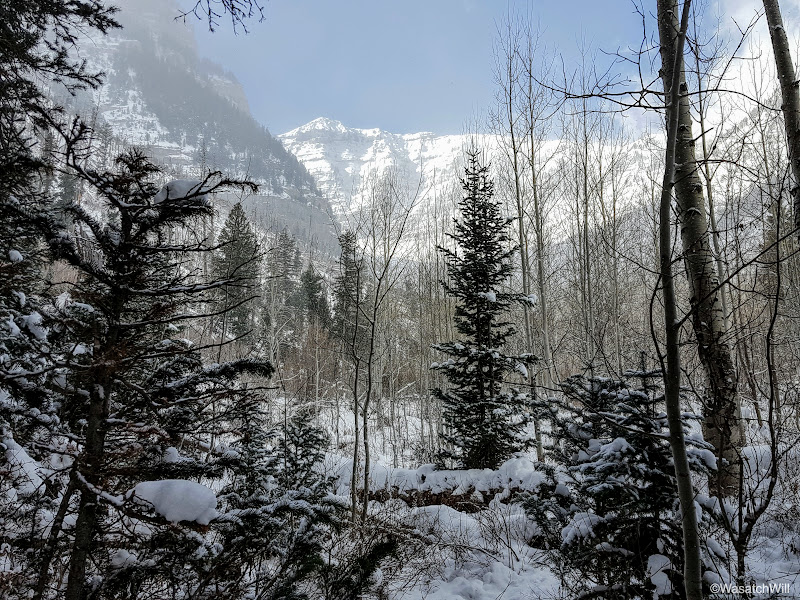 Near the start of the trail 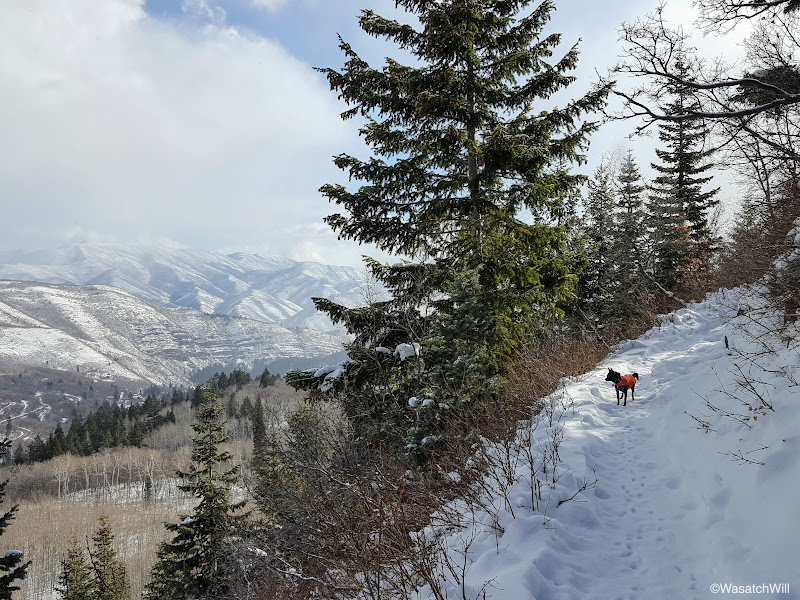 Where some views start to open up to the east 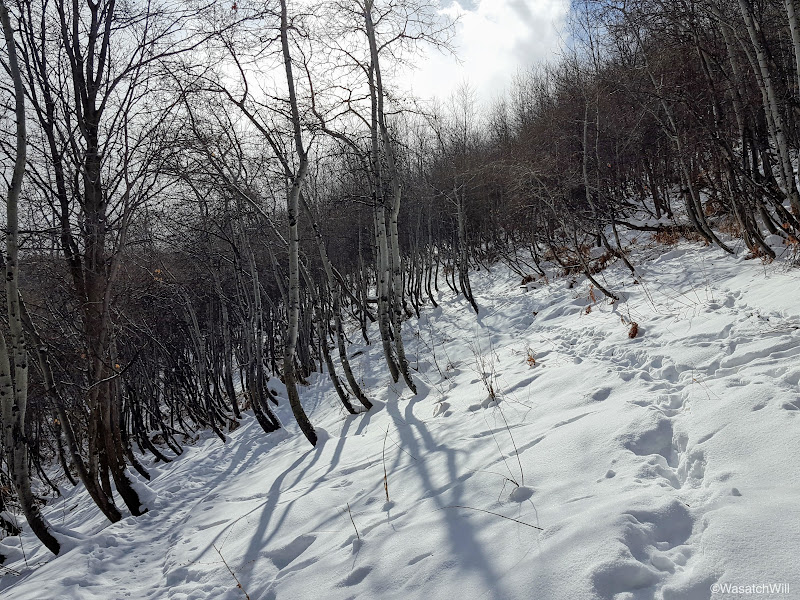 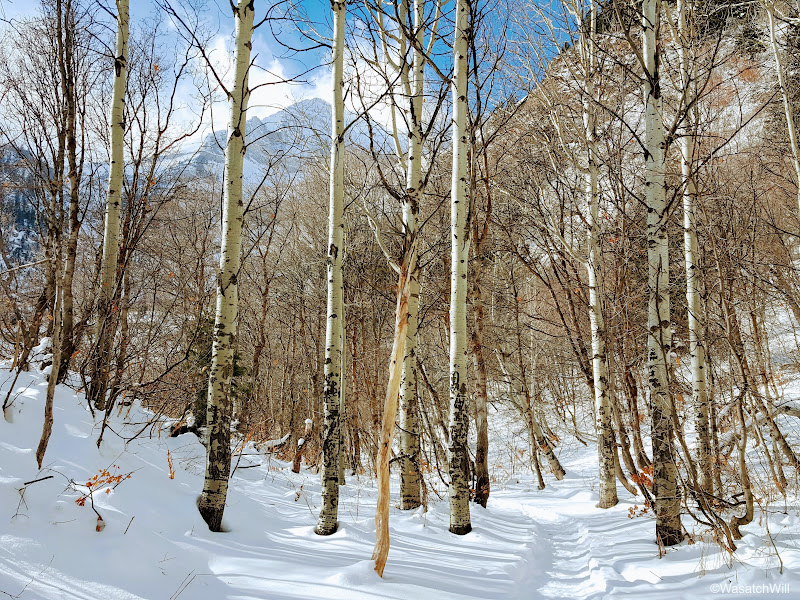 Continuing to pass through aspens

After just over a mile, the falls became visible.
. 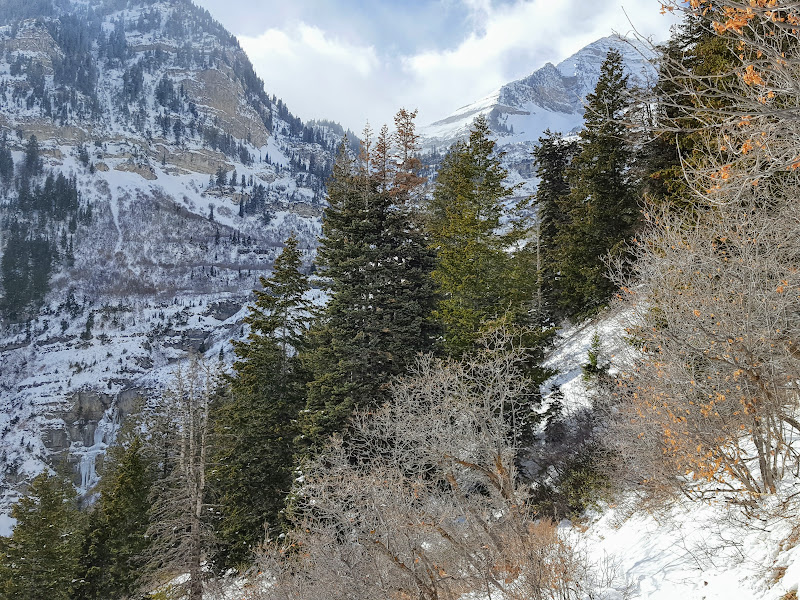 A little further on and the view of the falls really began to take shape. 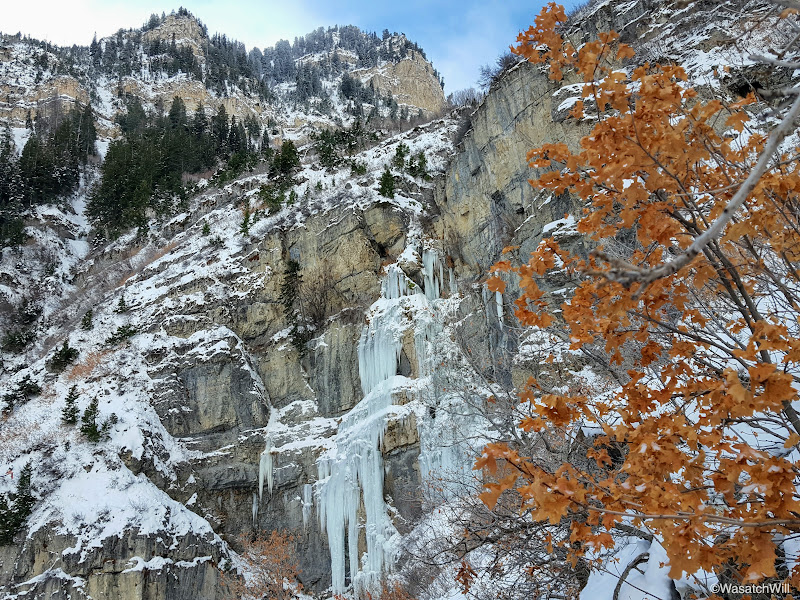 A contrast of seasons 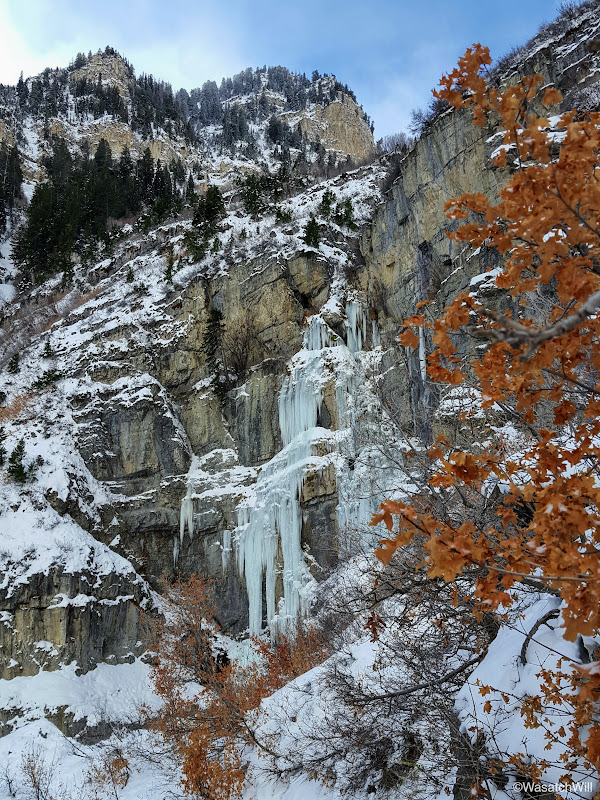 At this point the trail appeared to reach a dead end with a small but significant drop-off cliff now in front of me. Surrounded by snow, it wasn't immediately apparent how I could get any closer. Again, it had been over 10 years, about 17 years in fact, since I had last been here and was with a group on the run. No matter, the view was breathtaking. 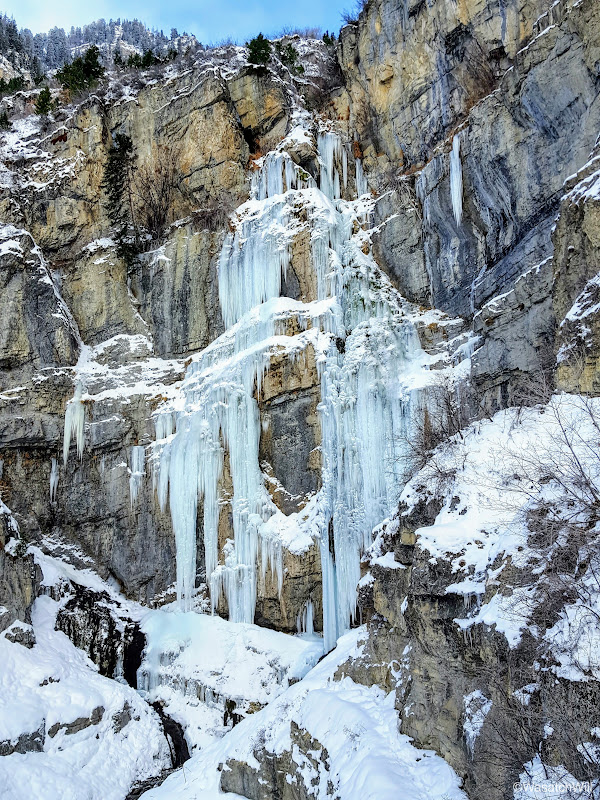 Upper half of Stewart Falls 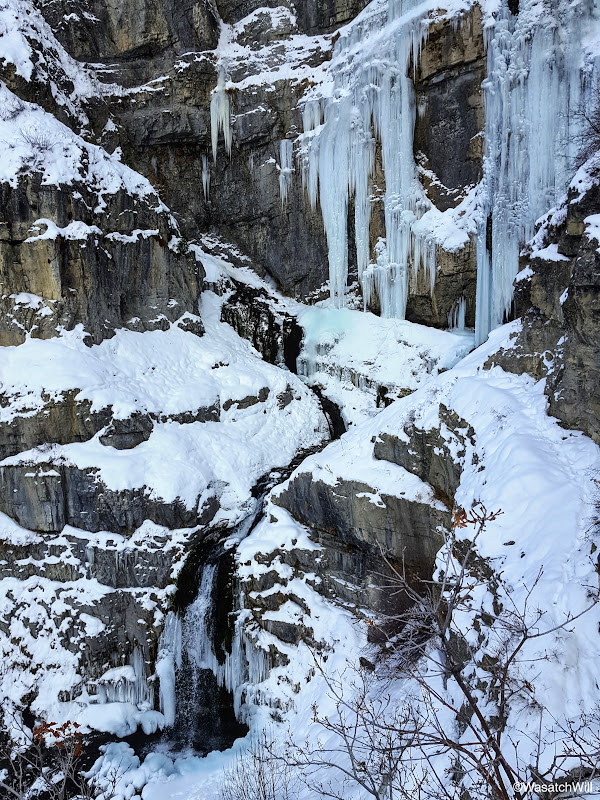 Lower half of Stewart Falls

After surveying around for a few minutes, I discovered a switch back where the trail made a sharp turn in direction to continue to the descent down to the bottom of the falls. Down Sophie and I went. 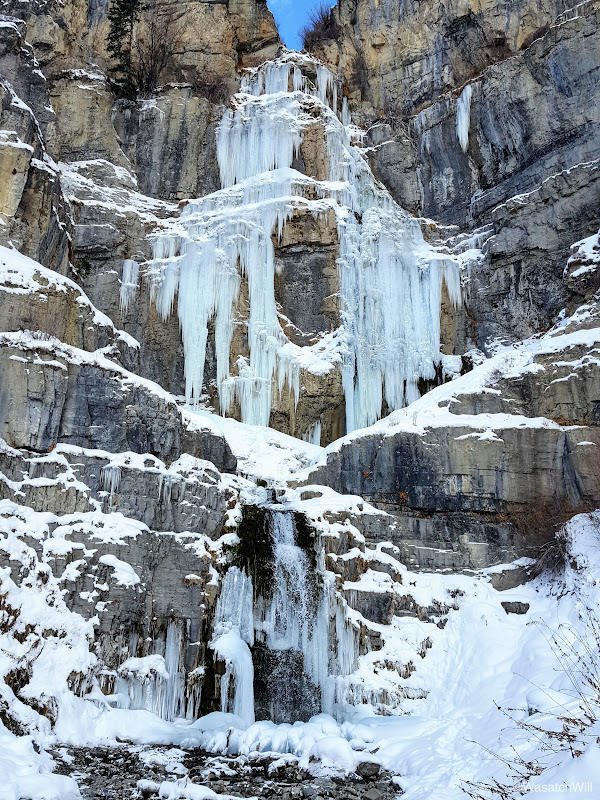 Near the base of Stewart Falls 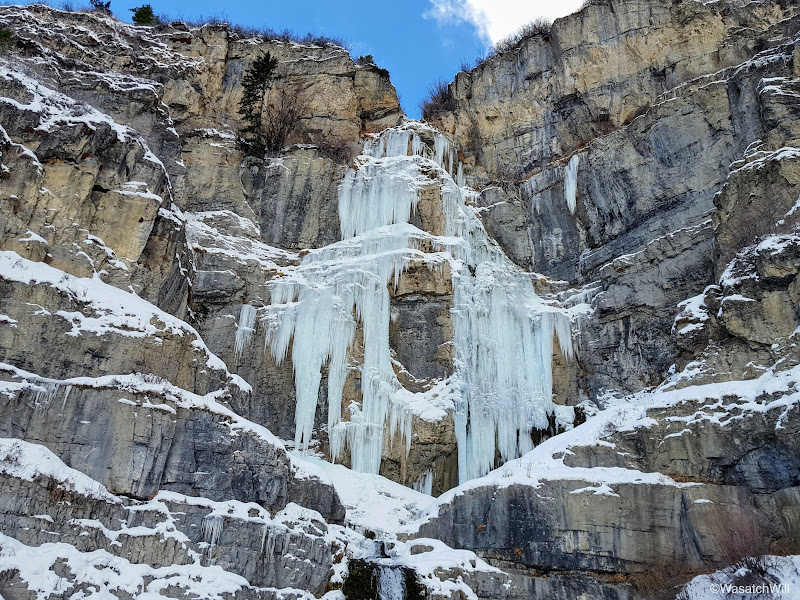 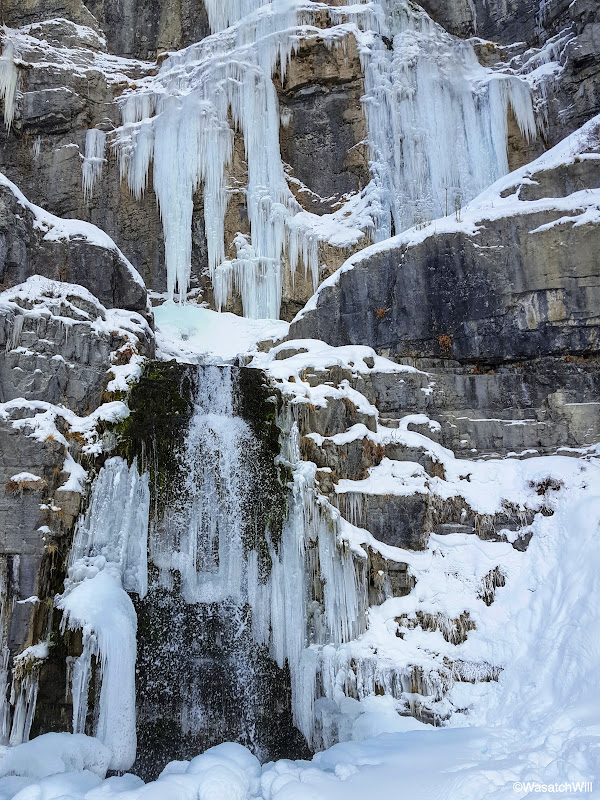 At the base of Stewart Falls 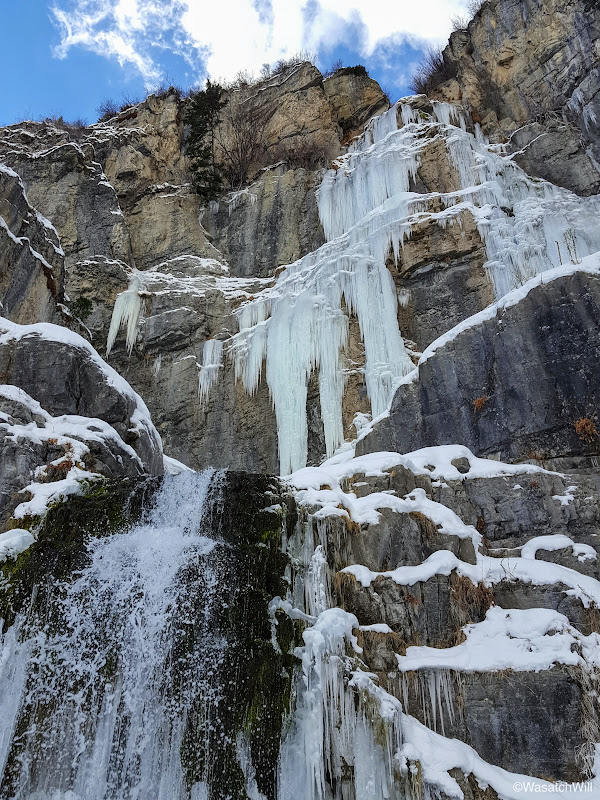 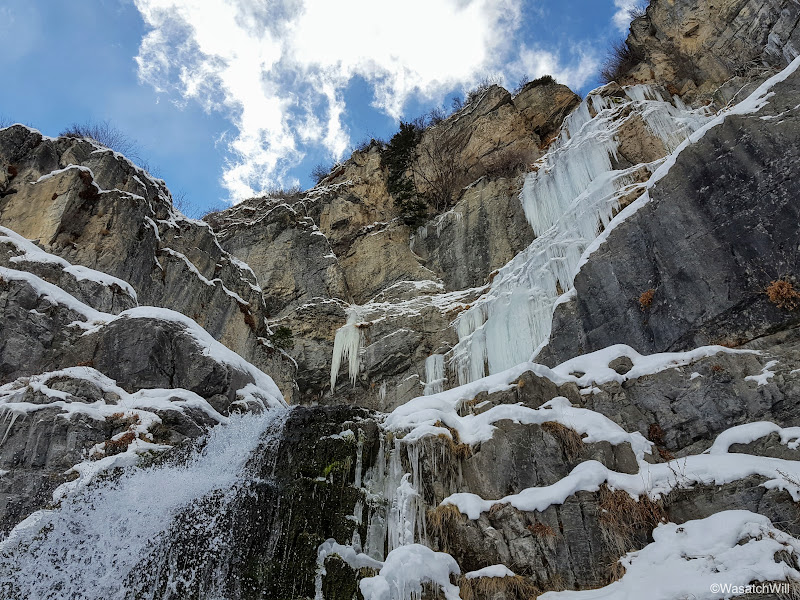 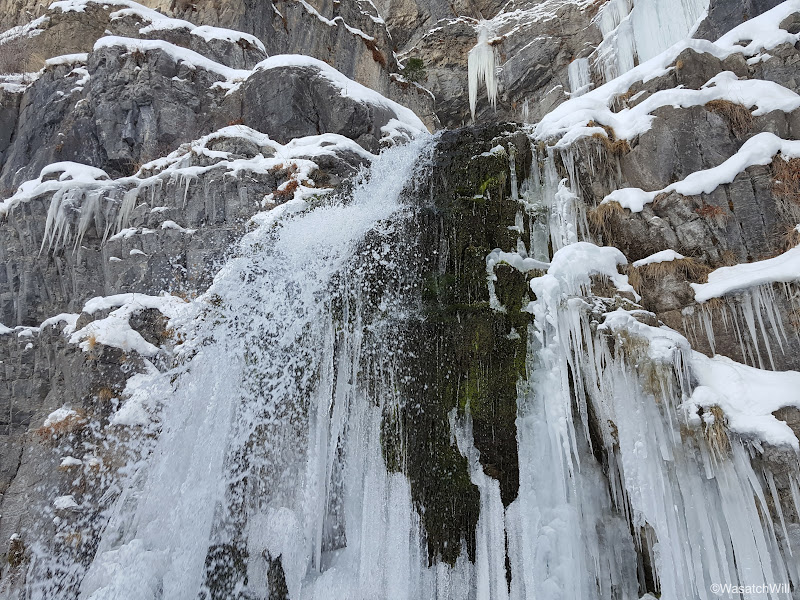 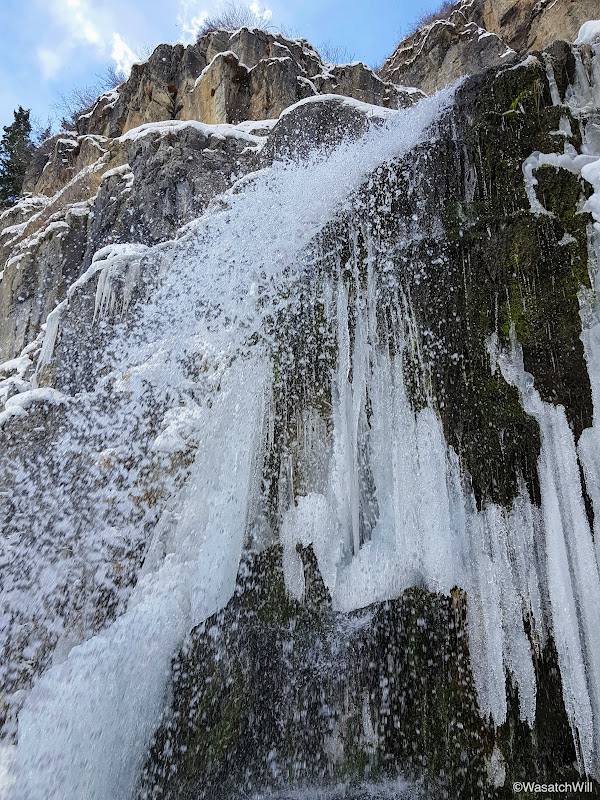 A very cold shower for those who dare 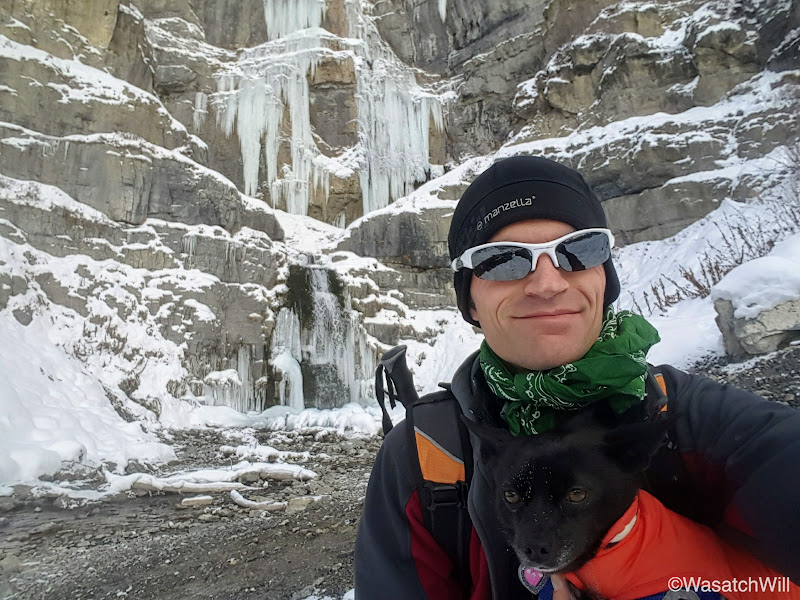 Needless to say, it was breathtakingly beautiful. Waterfalls take on a whole new mystical persona when overwhelmed by sub-freezing temperatures. Also, for obvious reasons, I passed on the opportunity to step directly under the falls, an experience I had embraced with the rest of the group I was with the last time around.

Satisfied with the quiet solitude I was fortunate to experience, I made my way back up and over. It wouldn't be until about halfway back to my car that I'd see another person, a couple actually, and their dog, all making their way to the falls. 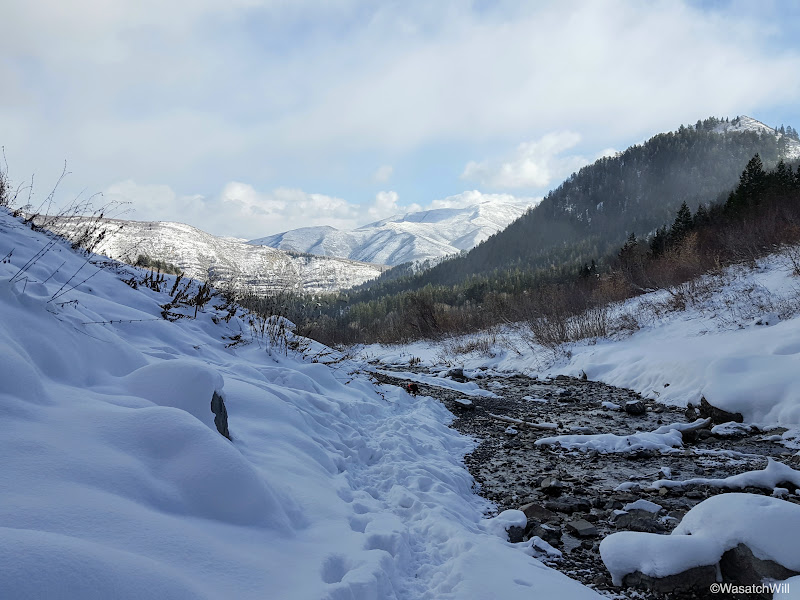 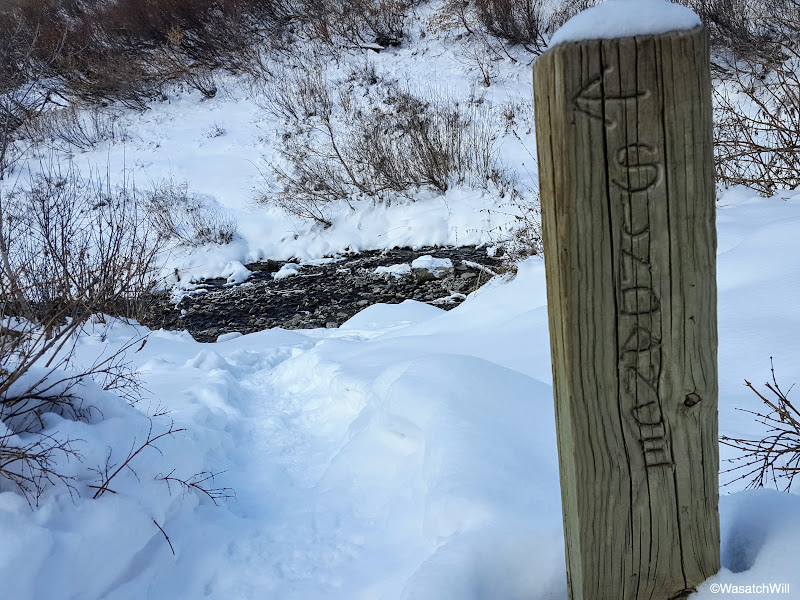 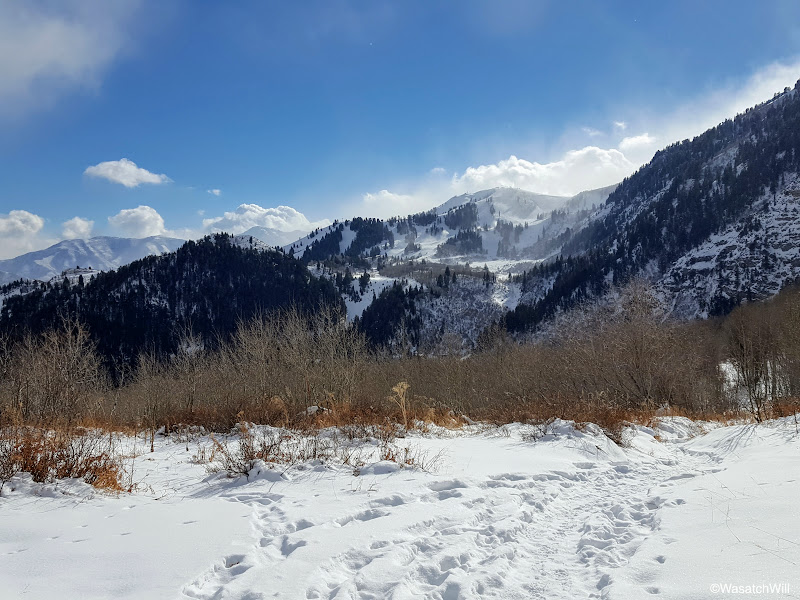 Looking back at the ski slopes of Sundance 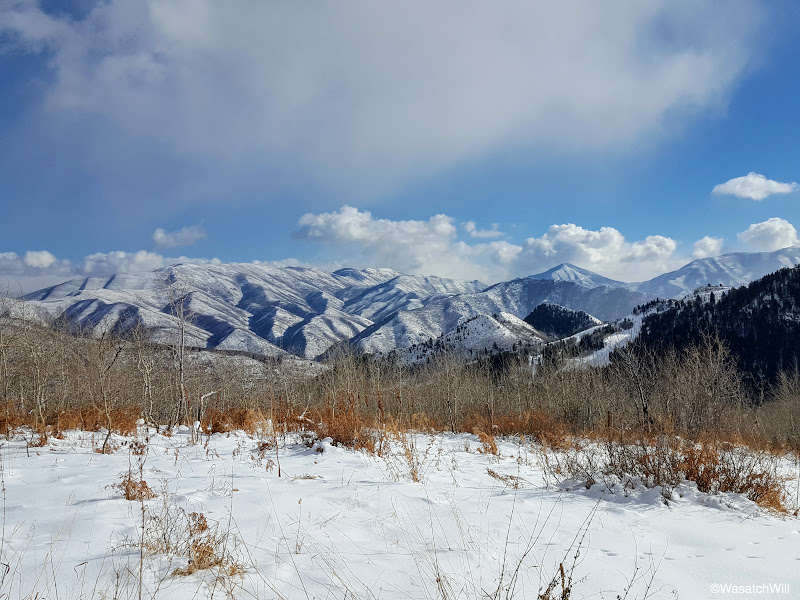 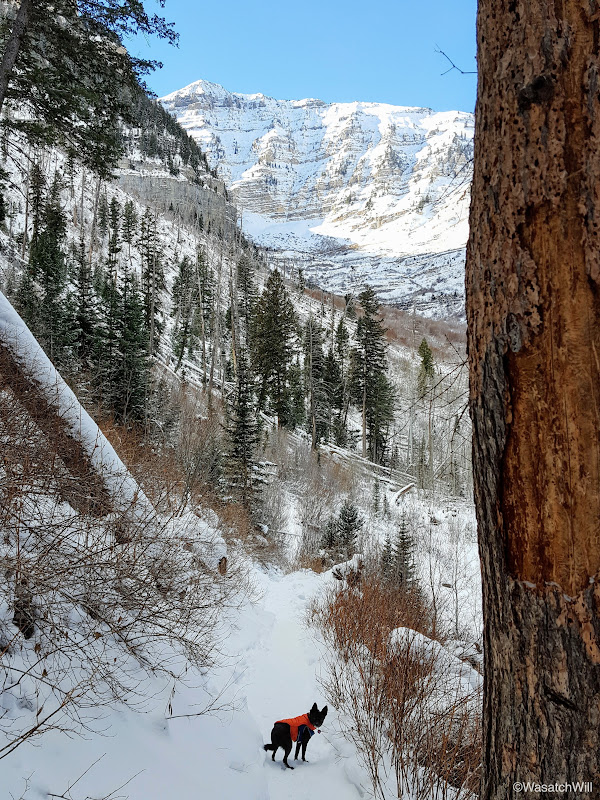 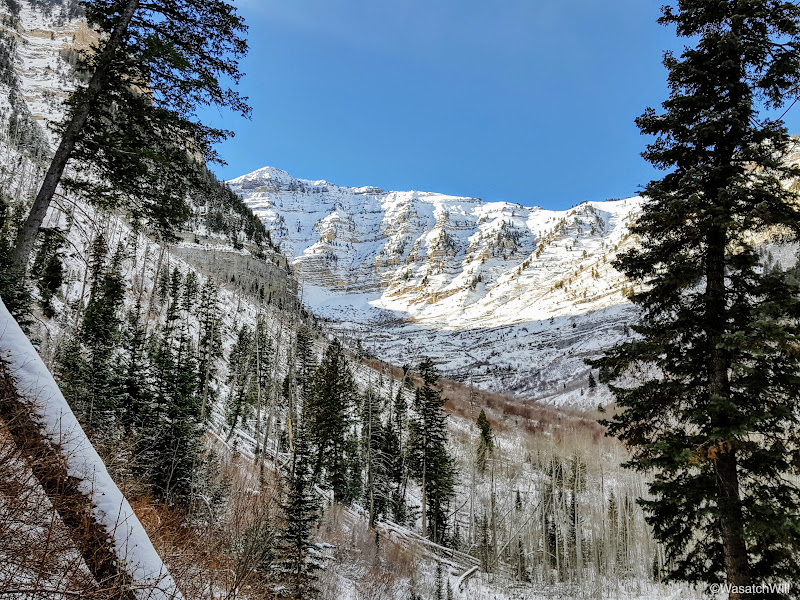 It was a wonderful outing and again, I found myself very grateful to live in a place where hikes like this are so close to home.

Nice report! I'm still surprised how nice winter hikes turn out... but they do.

As always, good stuff Will! I did my first Stewart Falls hike two summers ago.

The frozen falls are beautiful!

Thanks
Do not pray for easy lives. Pray to be stronger men. - JFK
Orem Chiropractor

DrNed said:
As always, good stuff Will! I did my first Stewart Falls hike two summers ago.

The frozen falls are beautiful!

Thanks! I've always wanted to try ice climbing, but then again I've always been fearful of the ice cracking and breaking while high up on it. But that's because I often forget just how incredibly strong even a very thin layer of ice can be when it is bonded to something. And then I'm reminded of that every winter when trying to open my car door in the morning after a wet and humid day that is followed by a night of extreme cold.
You must log in or register to reply here.
Similar threads