A short hike on the AT in Shenandoah National Park

I've been hiking on the Appalachian Trail for 36 years. I'm making progress, though quite slowly. I've managed to get a bit over 40% done, nearly 1000 miles. Since I moved out West, I have only hiked at Christmas, when my sister and I go to see her daughter's family near Richmond. I get to do a day hike. It's usually 3-5 miles, and takes a few hours. She drops me off and goes shopping, then we meet at a prearranged pickup point. Now that I’ve retired, we’re going a little earlier, while the weather is nicer. This time was Rattlesnake Point Overlook to Gravel Springs Gap, around 4.2 miles.

This segment had a lot of nice views. Sometimes there are only a few nice views nested in a walk in the forest. The forest looked nice, too... open, with small trees on the ridge, and bigger trees on the flanks of the ridges. 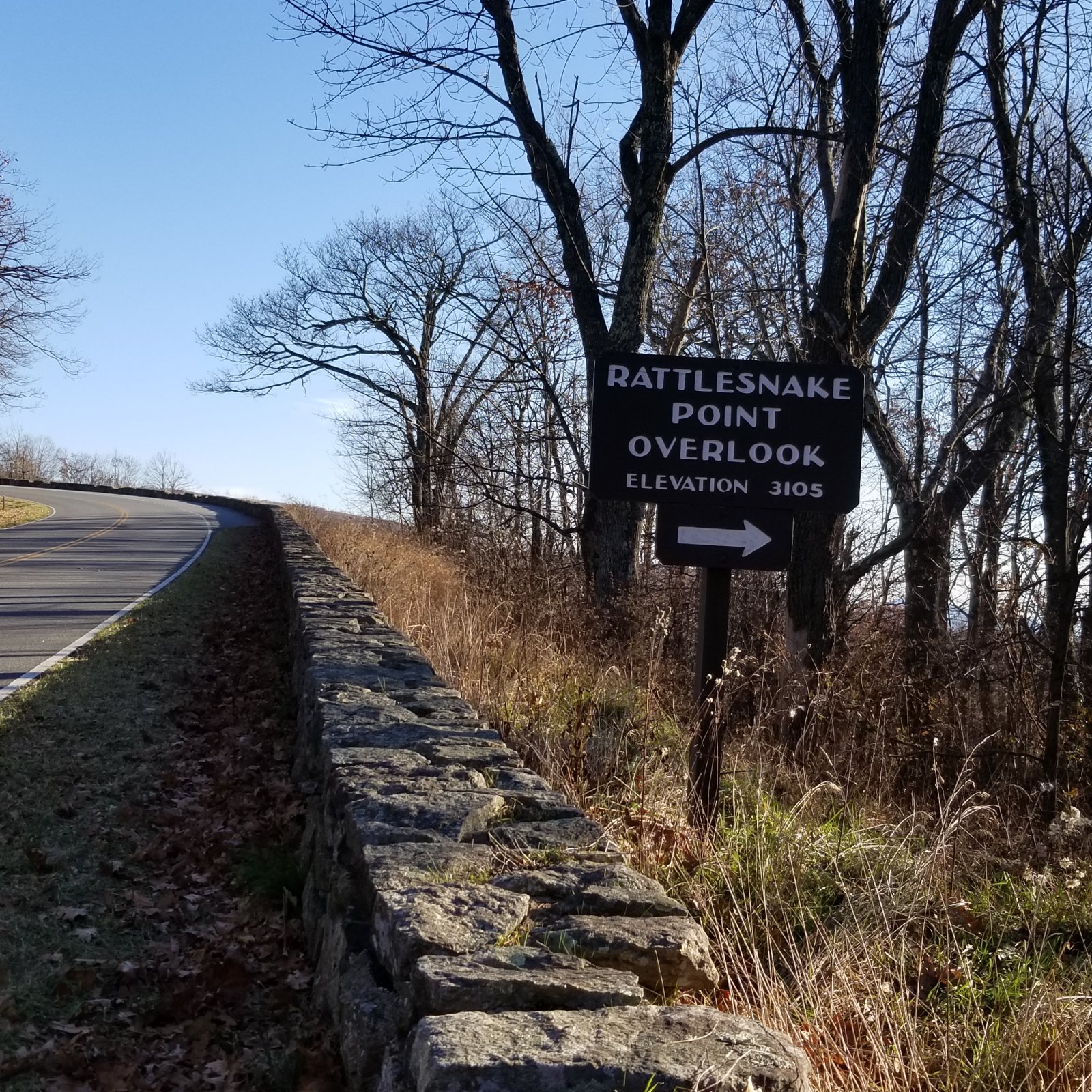 I had downloaded the map from Alltrails, but following the white blazes is comforting. (Also, I found that the Alltrails map I created followed Skyline Drive. Oops.) 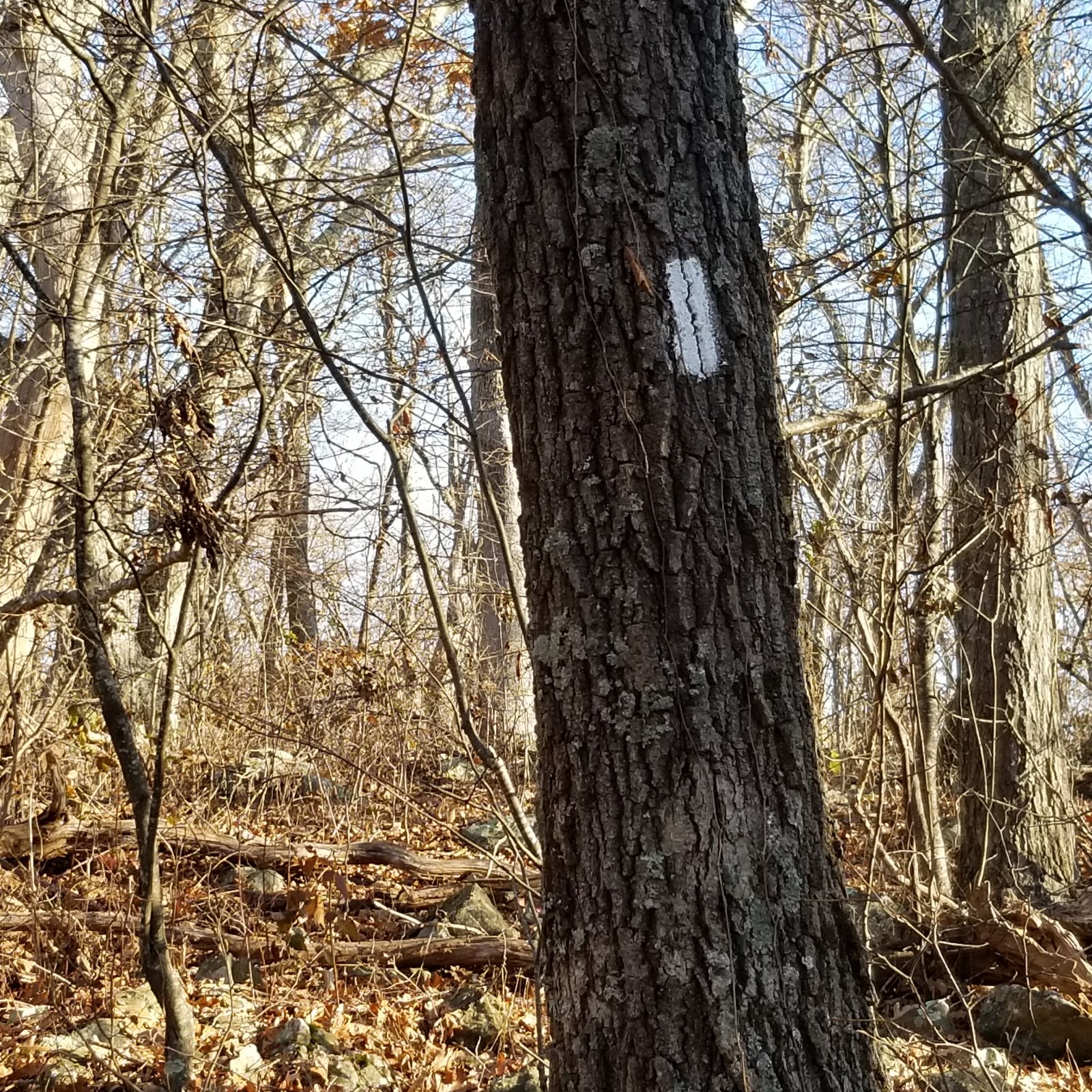 Maybe there'll be a view up here. 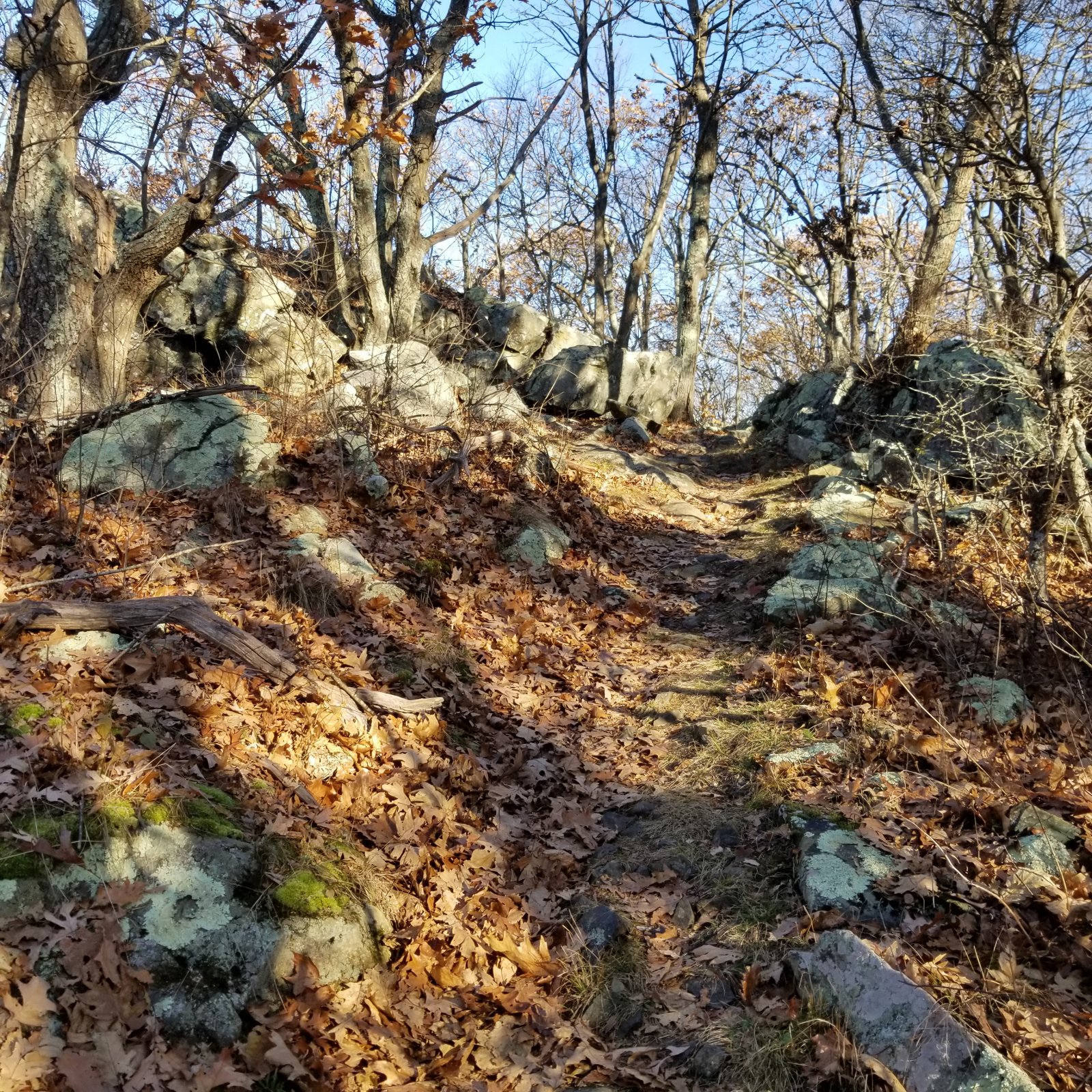 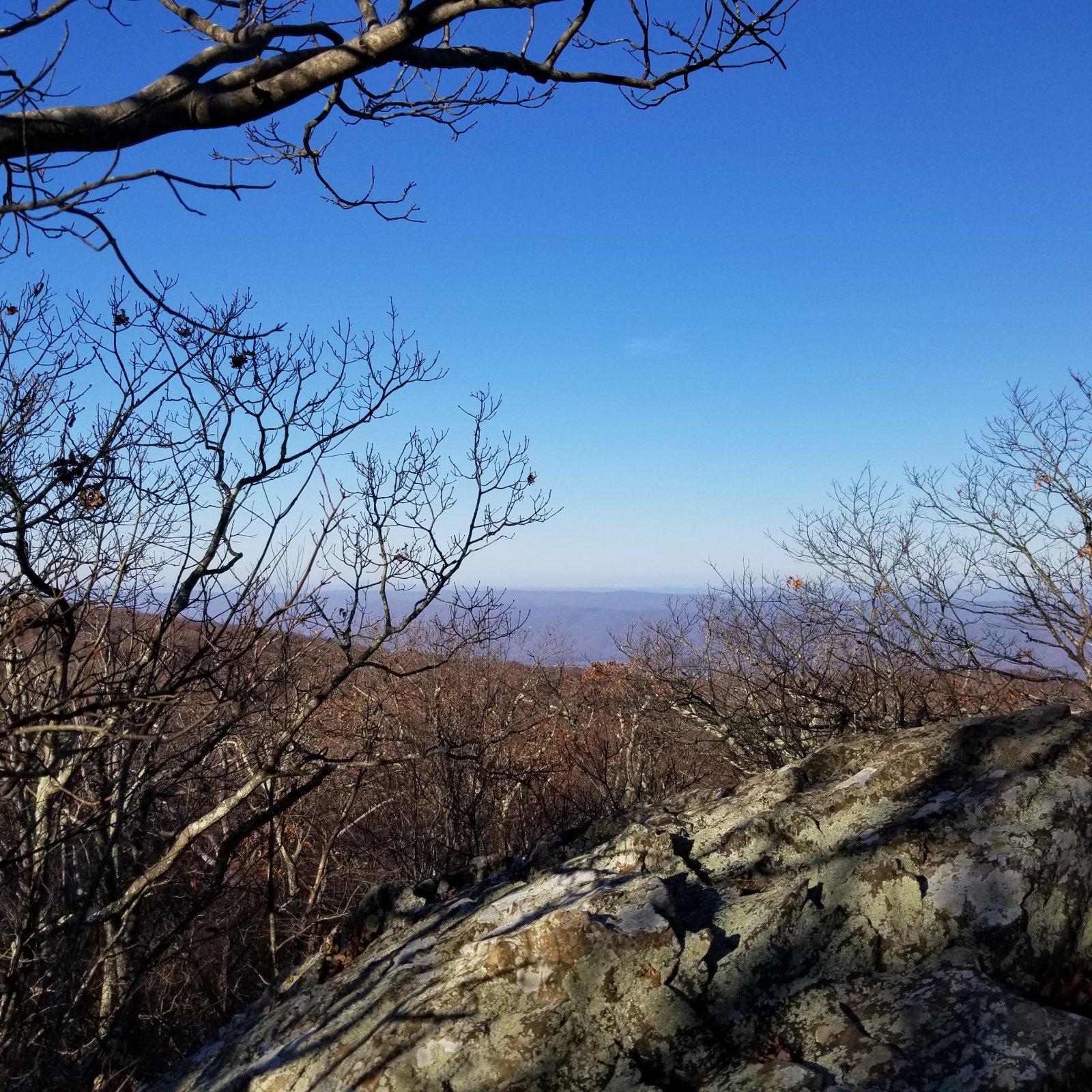 There is! A view to the northwest. It was worth the little climb.

I love the scraggly trees that live so close to the ridge. They have to contend with wind and cold and their twisted nature shows their character. 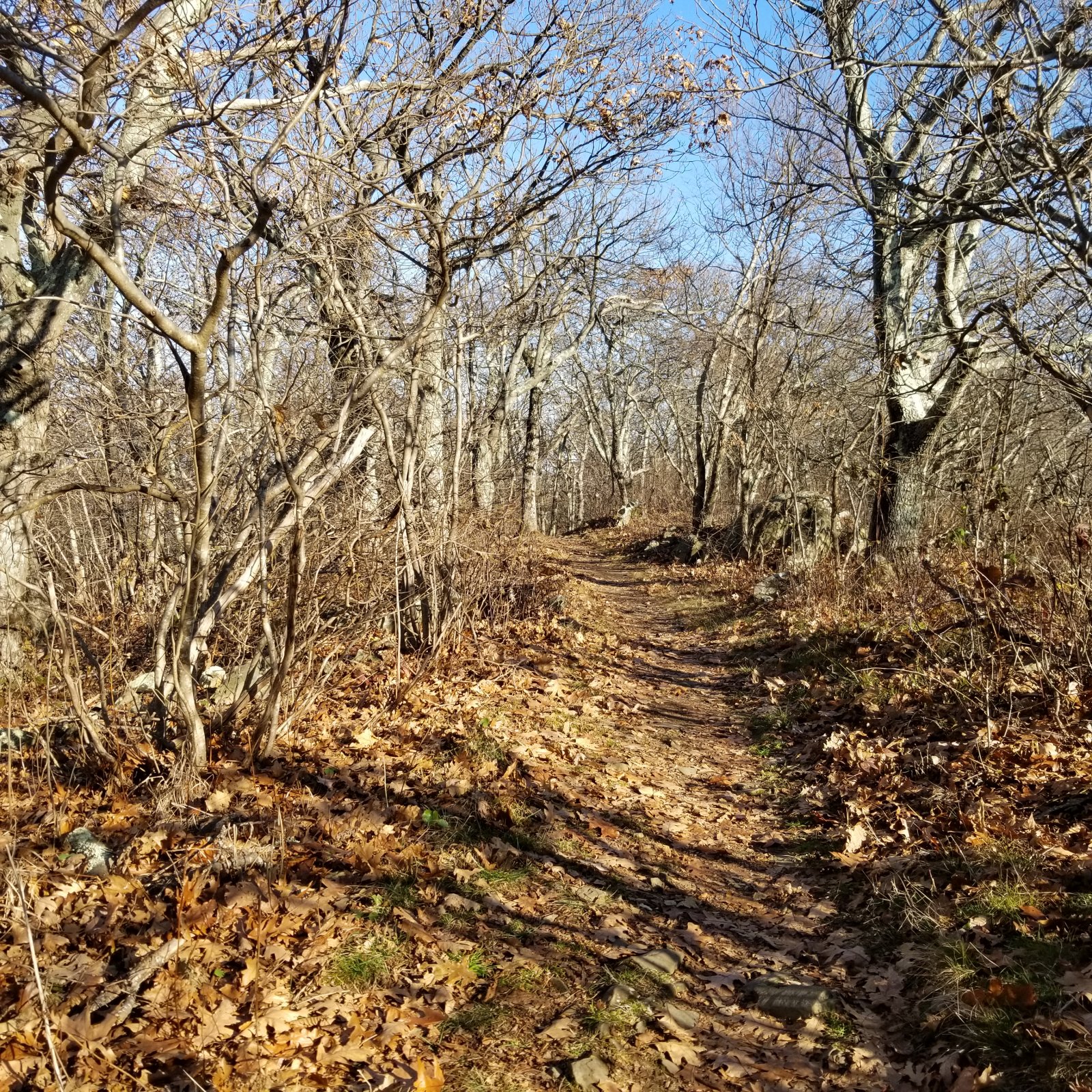 Some show less character than others. 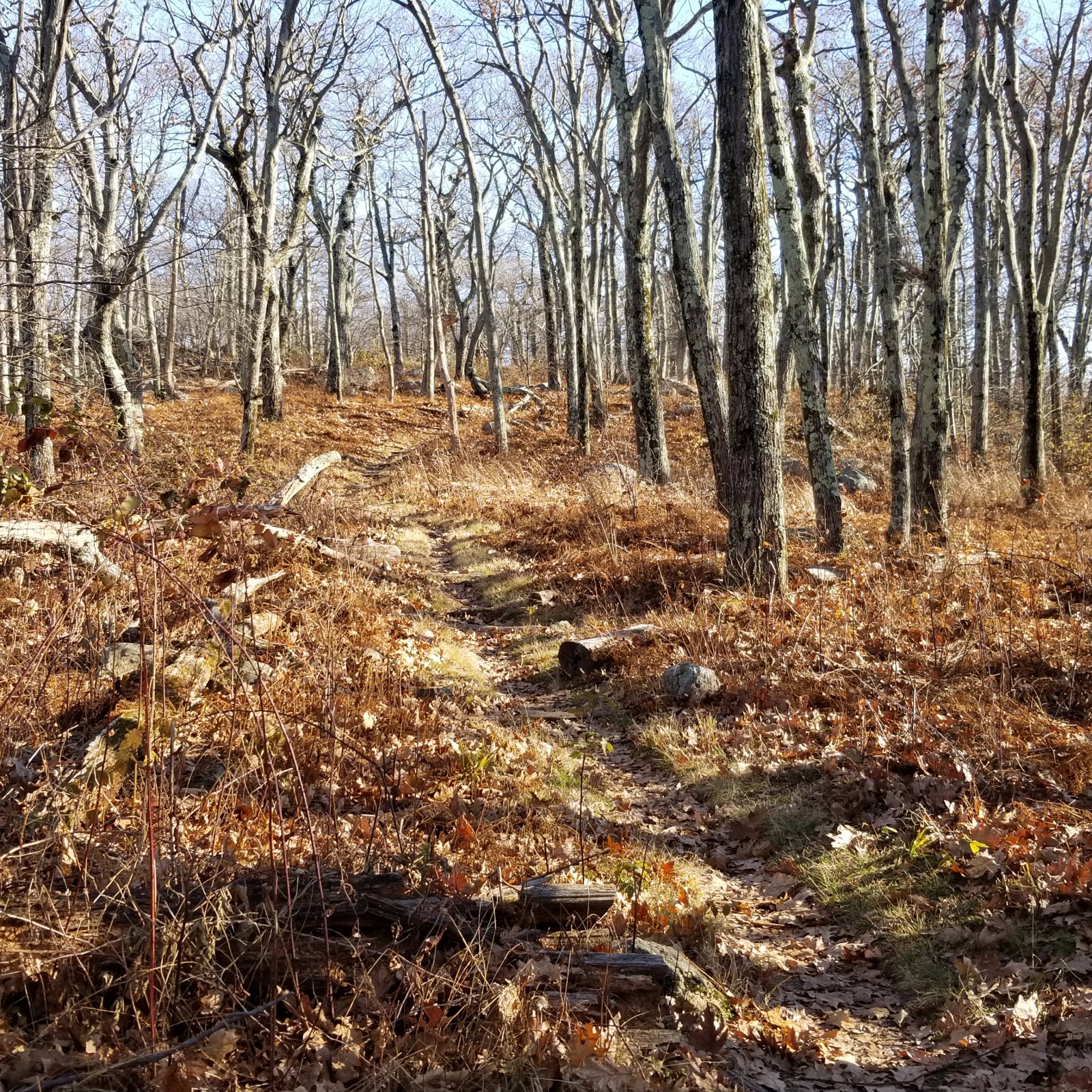 Again, a view to the northwest. 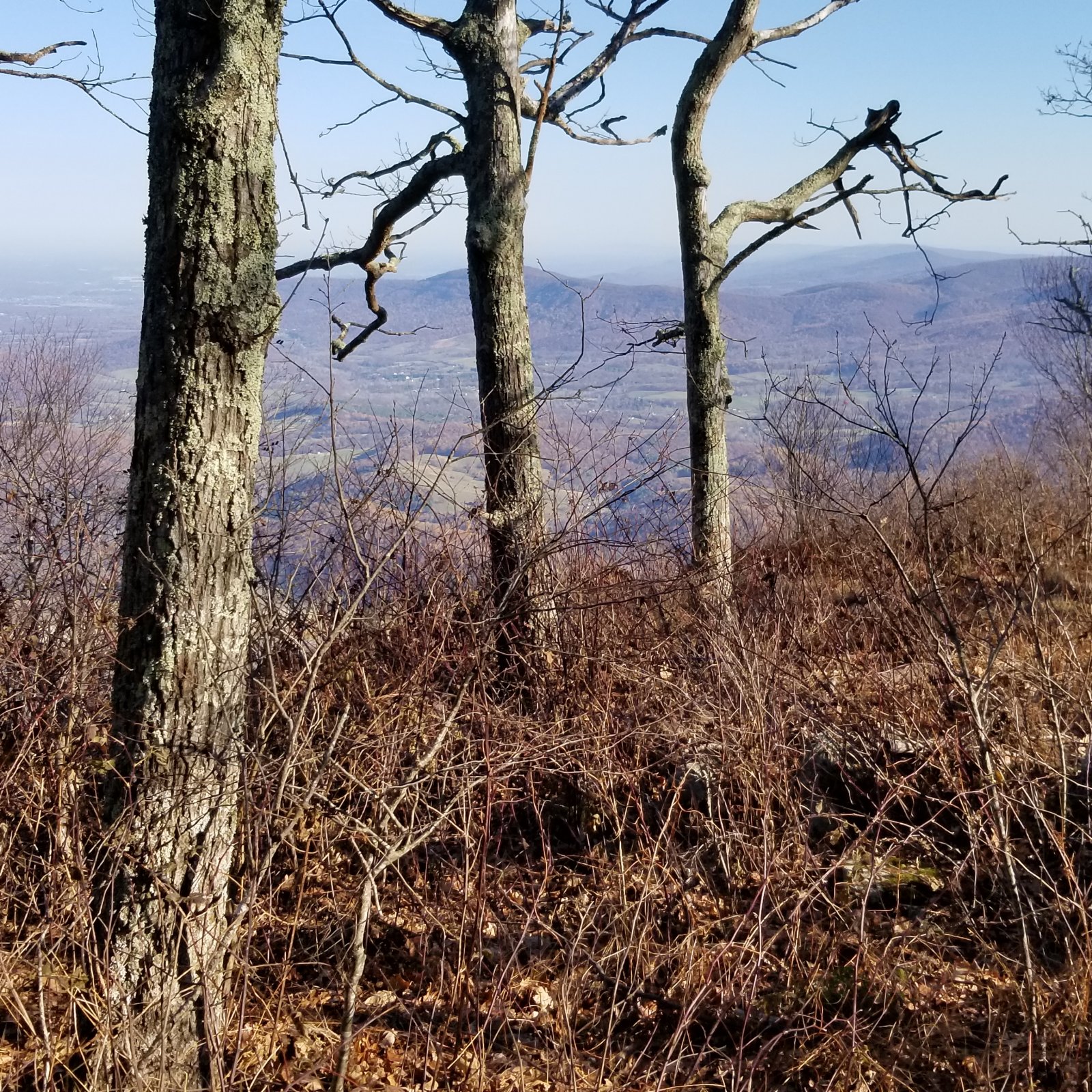 This time I peeked over the hill to find the Skyline Drive. I was never more than a hop, skip and a jump from it. I doubt most of the people in cars know the AT is so close. I doubt most know what it is.

Less crowded for us! Whoo hoo! 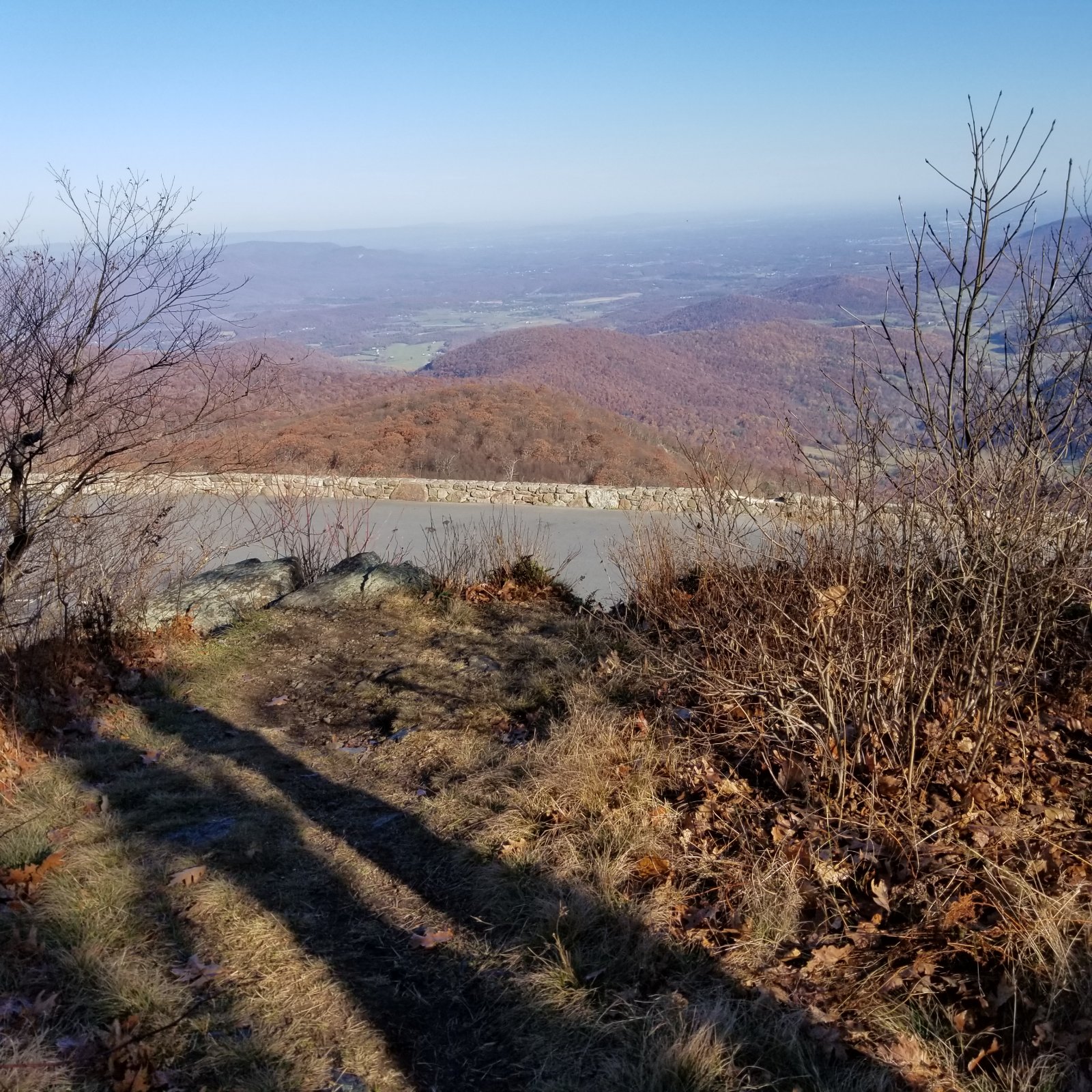 Mountain laurel line the trail. In the spring, these geometric flowers look like pompons of white. Now, they just look pleasantly green. 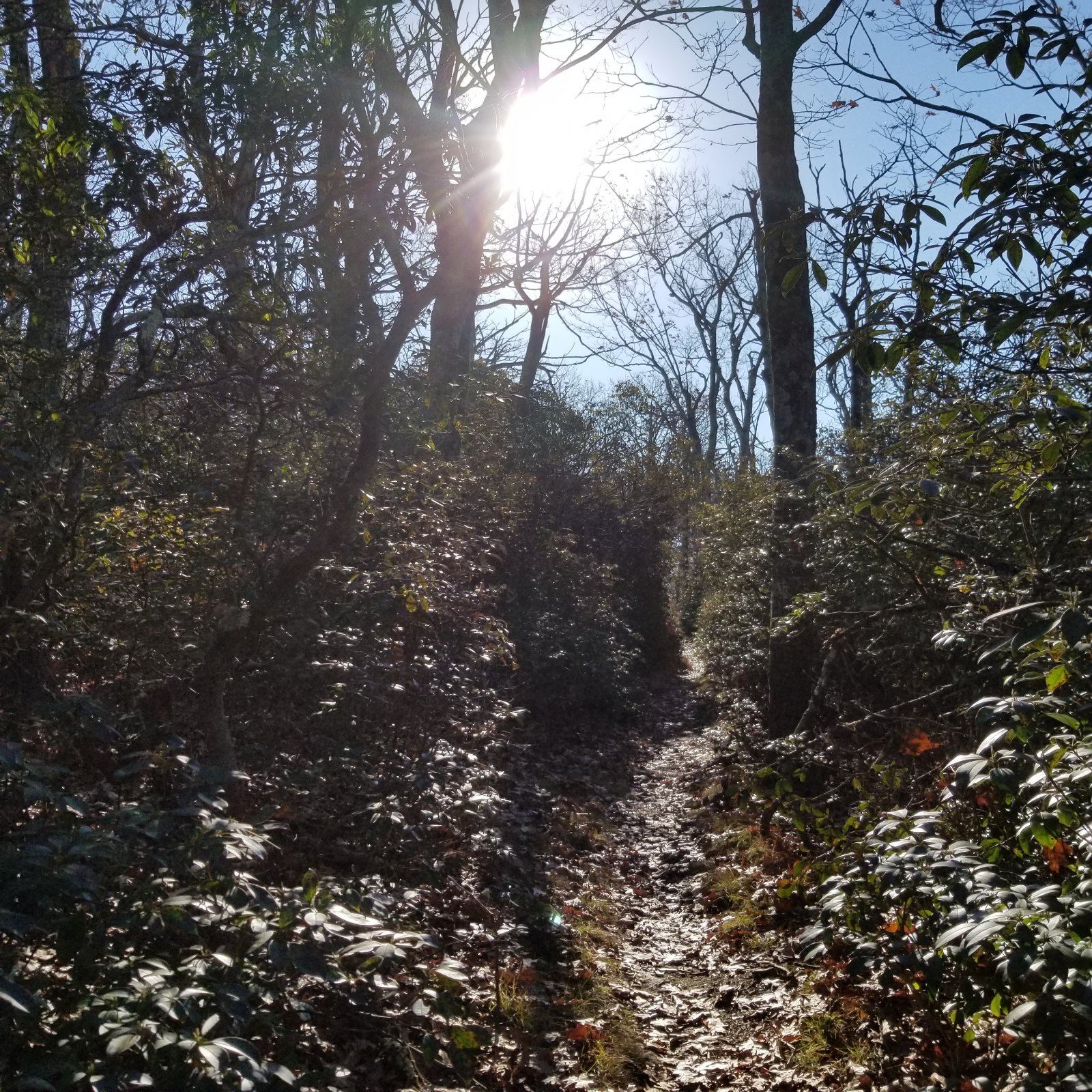 Enough up. It's time for a little flat trail along the ridge. 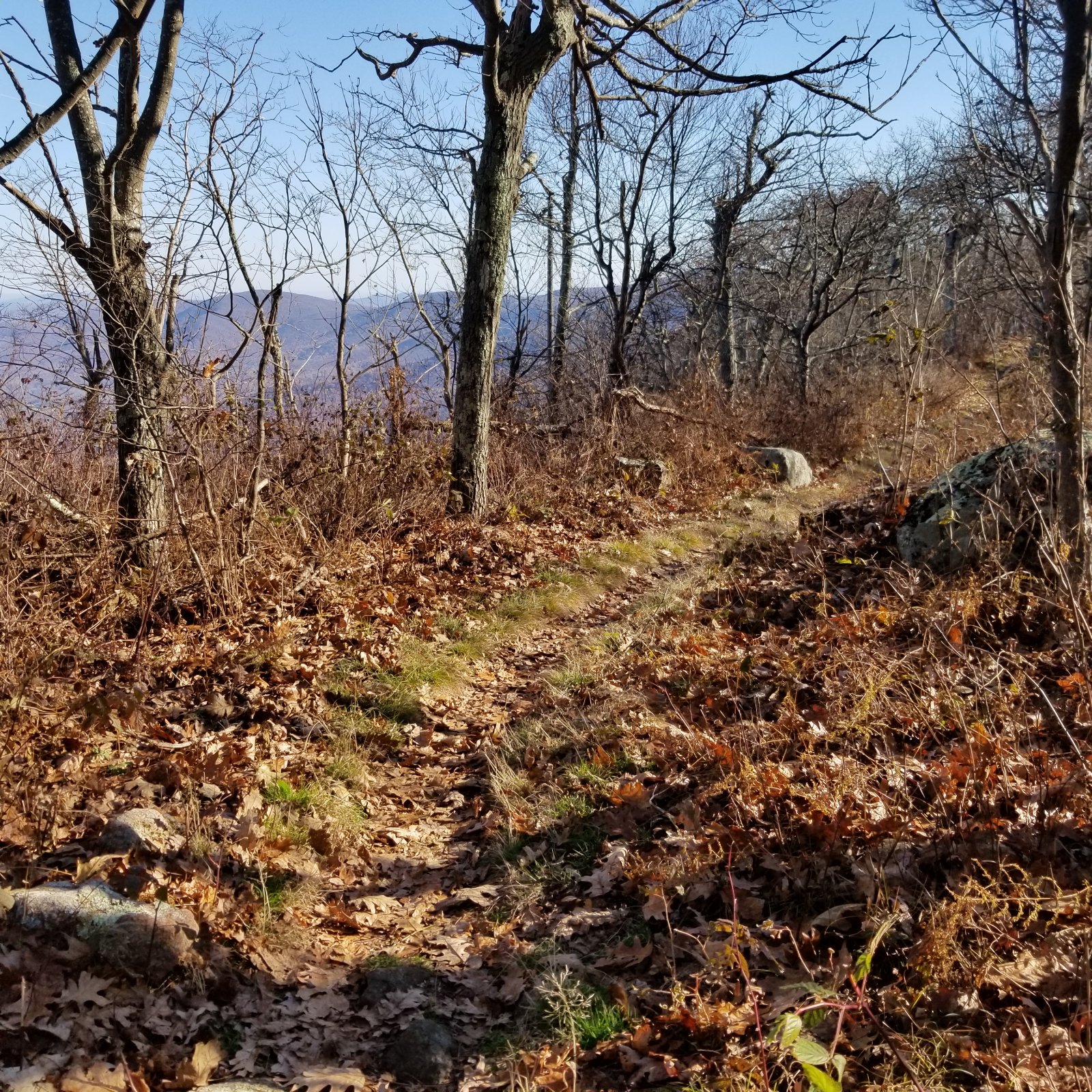 In Shenandoah, the trail is often marked with these concrete obelisks. There's a metal band, and embossed on the metal band are trail names and directions. And sometimes, spiders. (They're not embossed.) 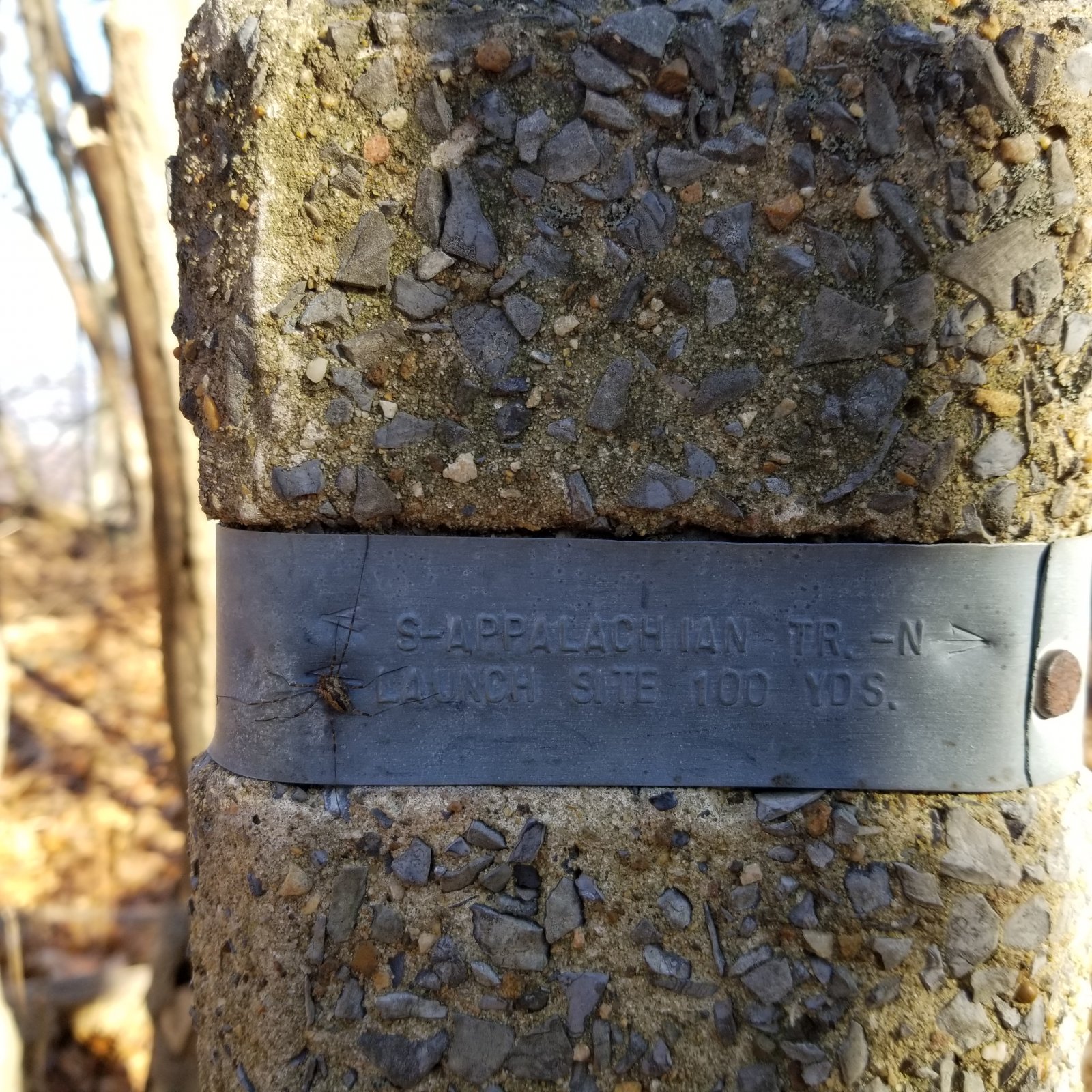 There's that hiker saying, "To look, to see, to see what you see." Grey rocks that aren't volcanic. The rocks and tree bark have minty green lichen. Oak trees, holding on to their leaves. Smooshed leaf duff hiding more of those gray rocks. Vines. Maybe grapes or green briar? And I look at this picture and can smell it. Damp leaves and soil. 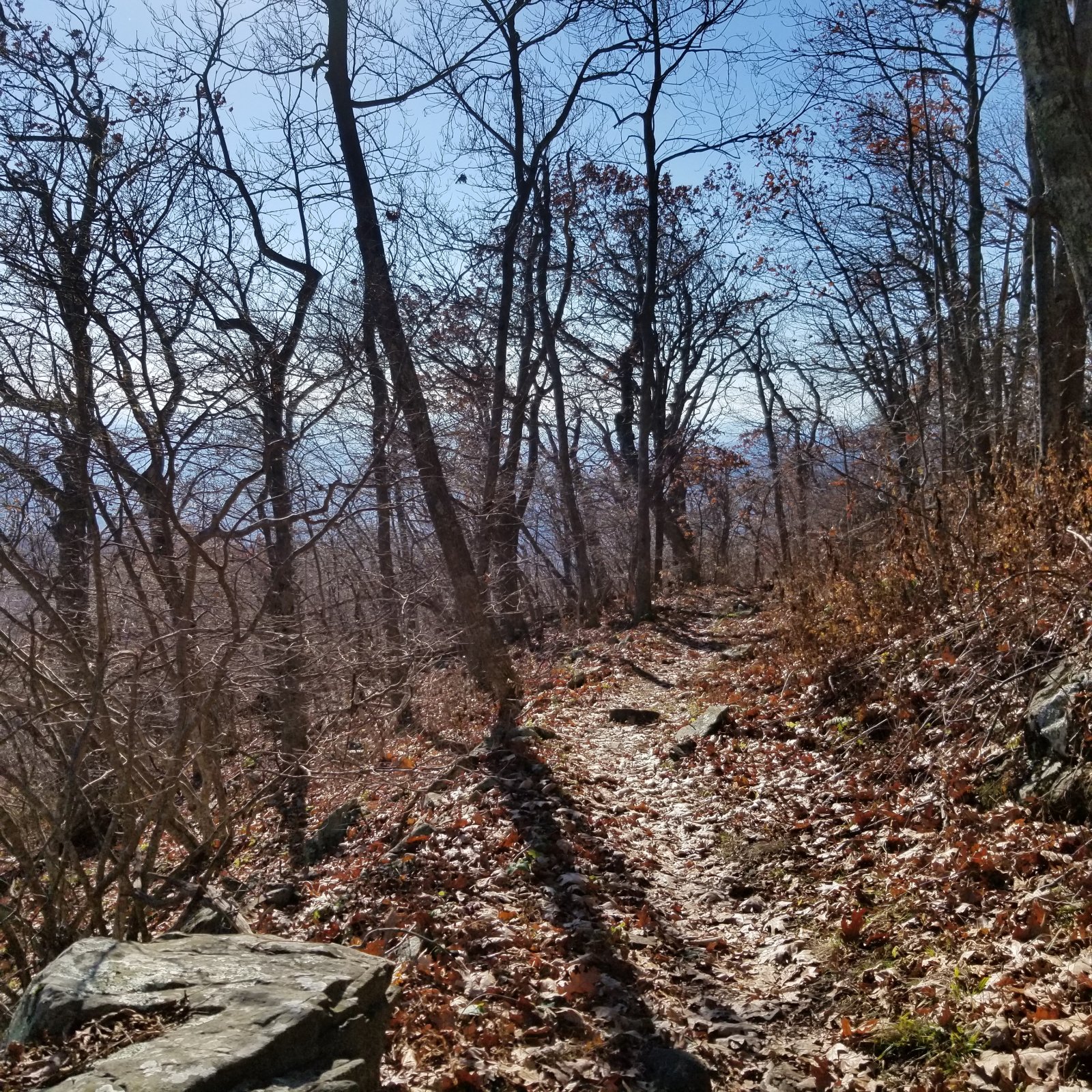 The AT doesn't have a lot of open areas. There are balds down south, and fields once in a while, and places where power lines cross (the buzzing is disconcerting). Then, sometimes, just because, there are openings. This one was just below a pullout on Skyline Drive. Again, I imagine those pulled over would be startled to look over the edge and find someone walking. 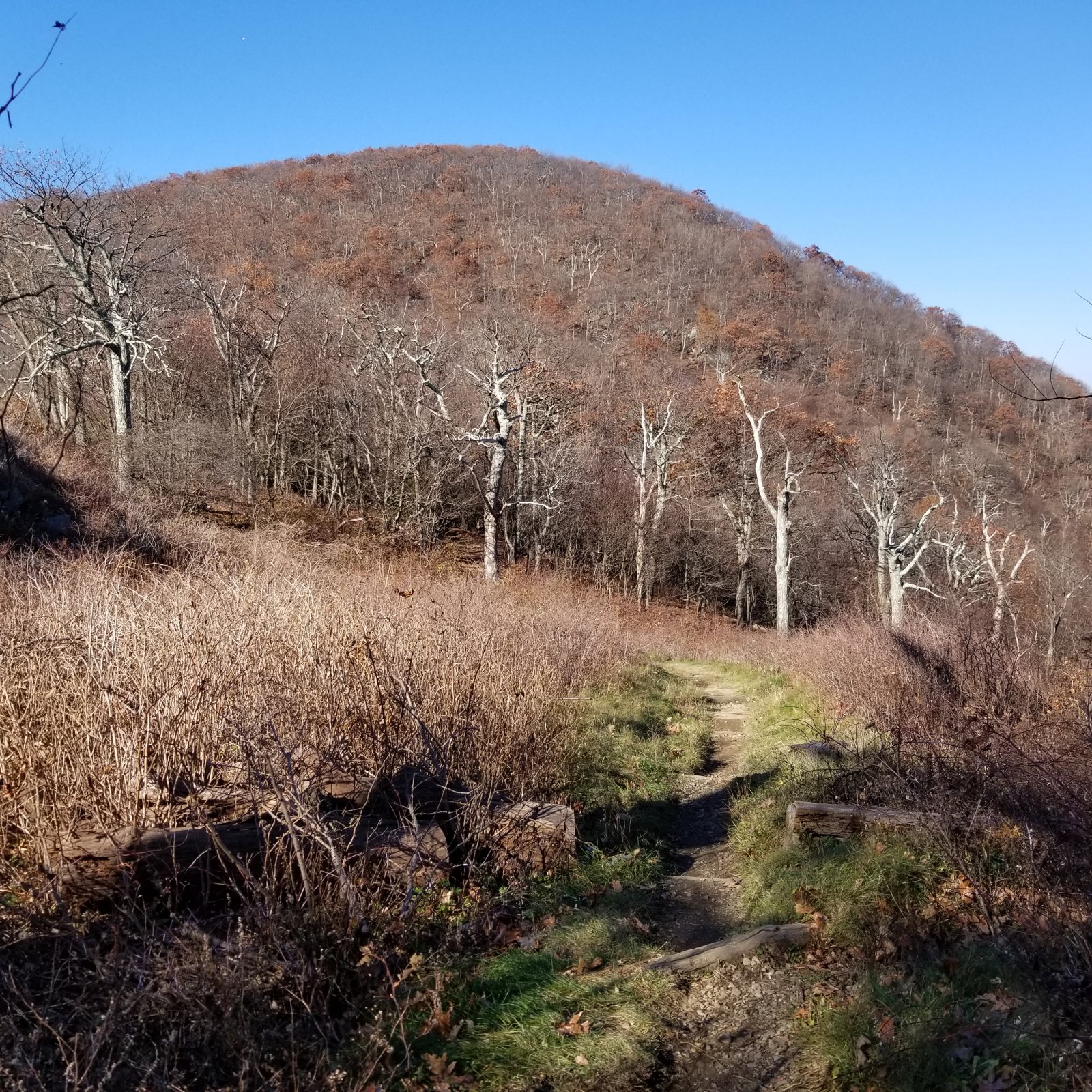 The trail crosses Skyline Drive periodically. In my 4-plus mile hike, I think I crossed it 4 times. I'm not sure. I wasn't really counting. Sometimes the road and trail cross frequently, but I have a section to the north (nearby) where I have to do about 10 miles between crossings. My sister will get to do a lot of shopping that day.

I've hiked at Shenandoah a number of times. It's fairly flat, or at least the climbs and descents are moderate. It has lots of road crossings, which help me with picking up short mileage. I've hiked by shelter turnoffs, but never seen a shelter in this park. Maybe someday. 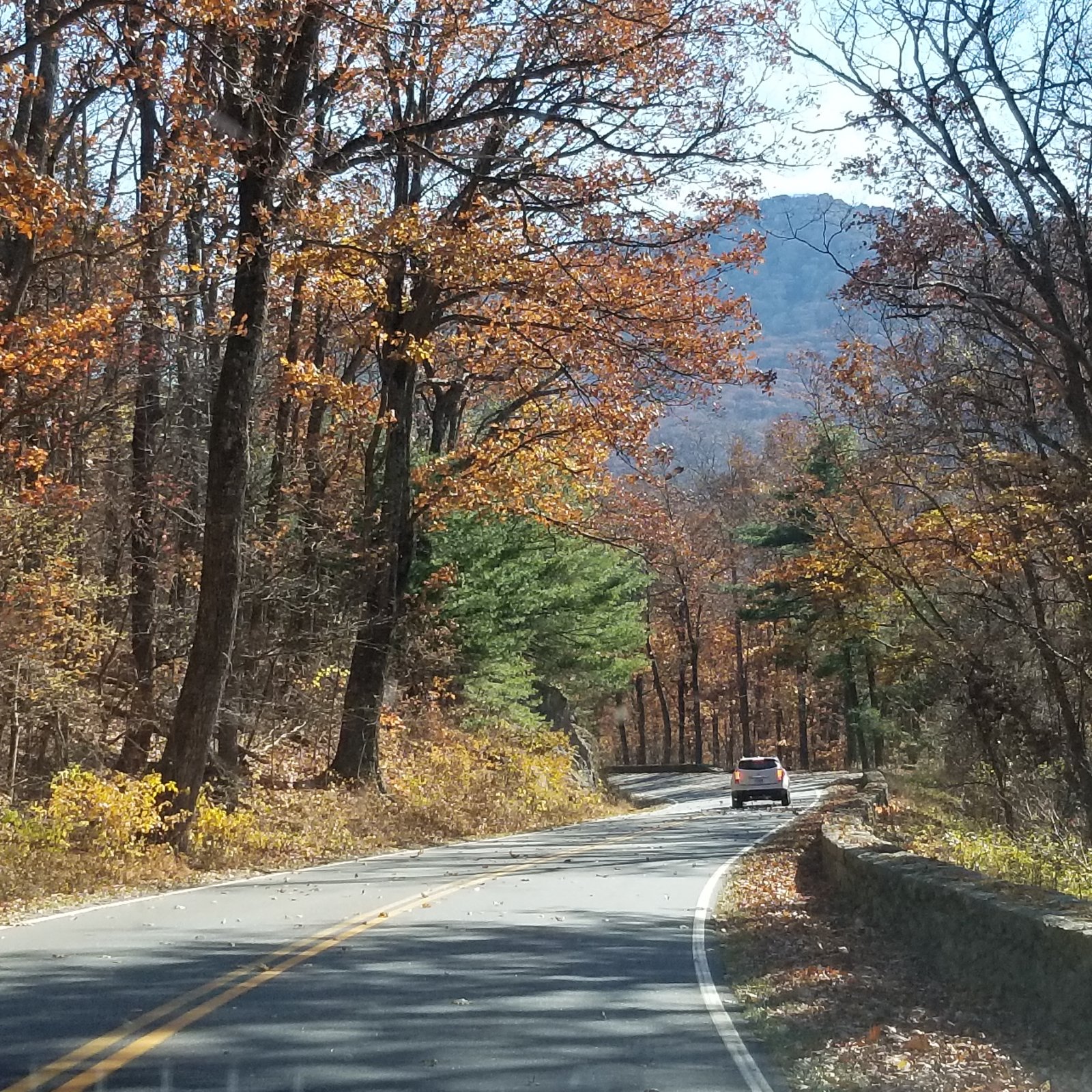 Last edited: Nov 25, 2021
You must log in or register to reply here.
Similar threads