A couple trips with kids

After the Dolly Sods with all my kids, my wife took the oldest kid to Chicago for a girls trip and I took the younger two to the Smoky Mountains for a couple nights. My first thought was the Smokies and camp with easy access to Lake Fontana since the weather forecast looked hot. But then I remembered the Deep Creek area. I had not been here in a couple of years. I knew it would be crowded at the trailhead since it is popular with tubers, but I had no idea how popular. My biggest concern was weather/heat, the highs were forecasted to be in the mid-80s, but I figured we could cool off in the creek.

So three nights along Deep Creek and Indian Creek, a ~16 mile loop was mapped out and off we went.

Note: just my crappy cell phone with a crack across the lens for photos 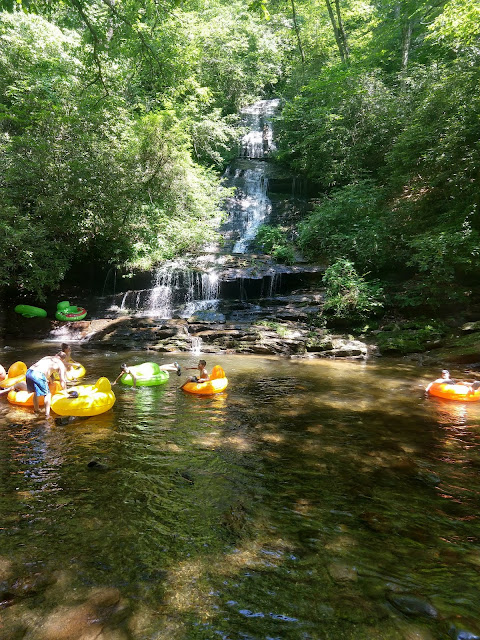 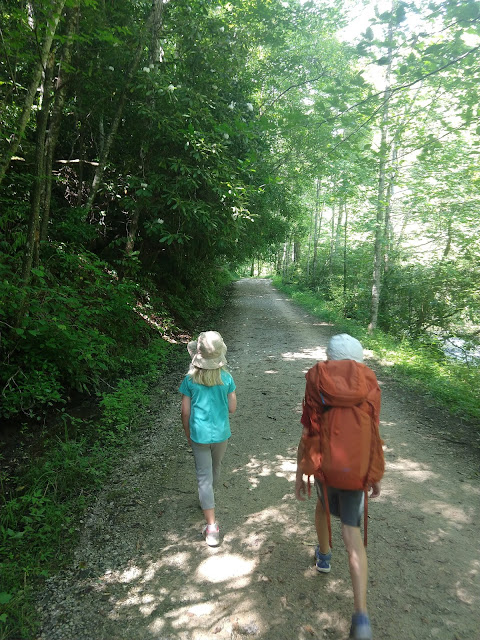 The kids loved the butterflies, as did I ... 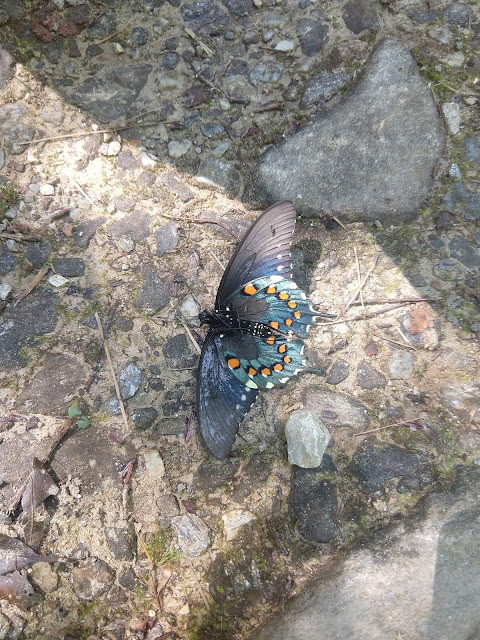 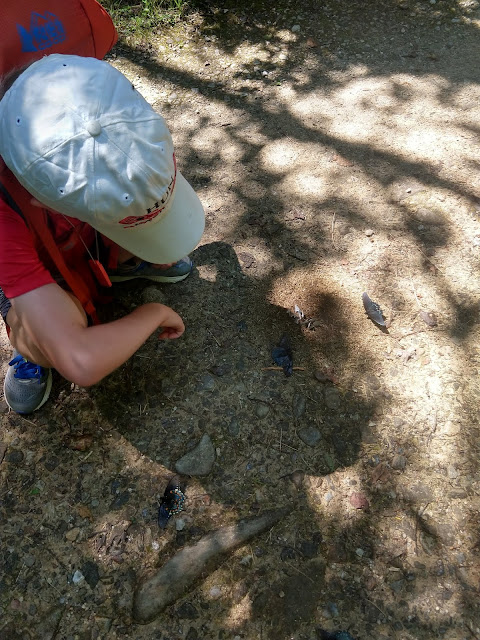 ... I liked the flowers as well 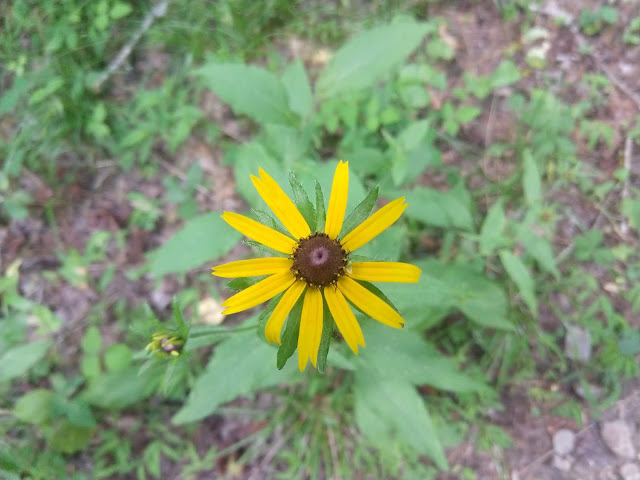 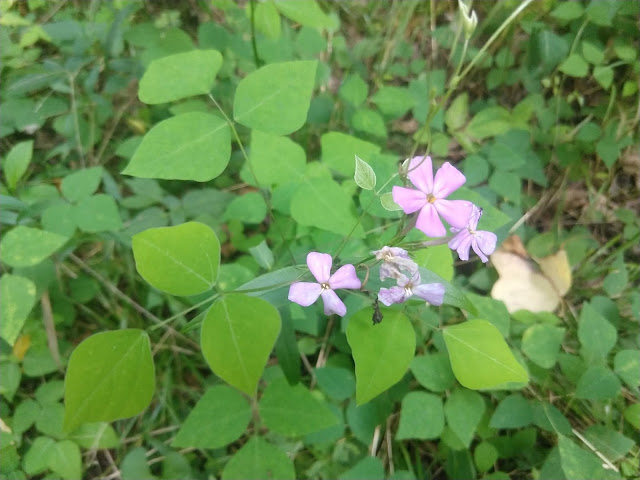 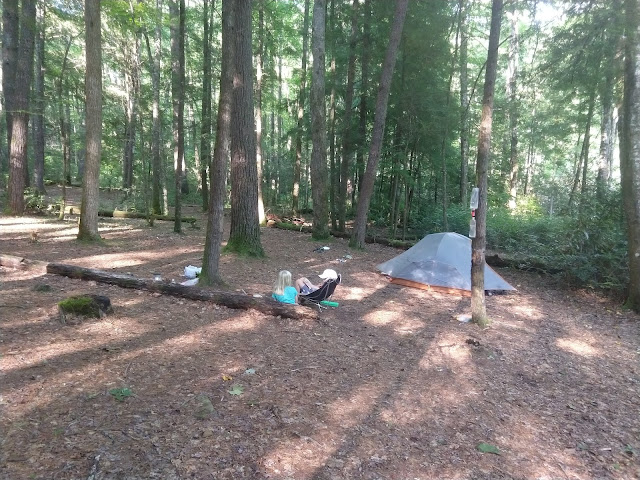 There were three young guys here as well. I asked if we could share their campfire for a bit and they were nice and said sure. They were doing the same loop we were but in reverse and only 2 vs 3 nights.

Looking up Deep Creek as the sun drops behind the ridge. 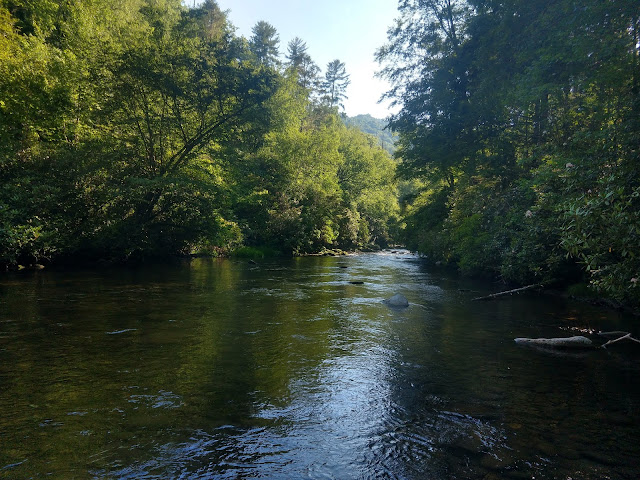 Woke up the next day and after a leisurely start, we headed up the trail. 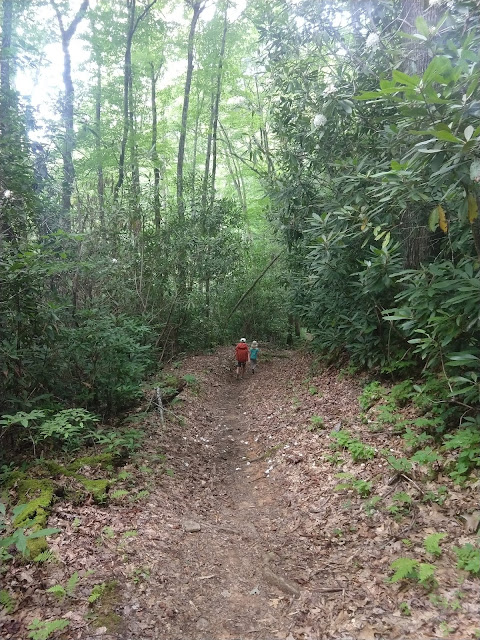 A moth with a broken wing was fluttering next to the trail. The kids felt bad for it and then my son started talking about how it was going to probably die soon and we moved on down the trail 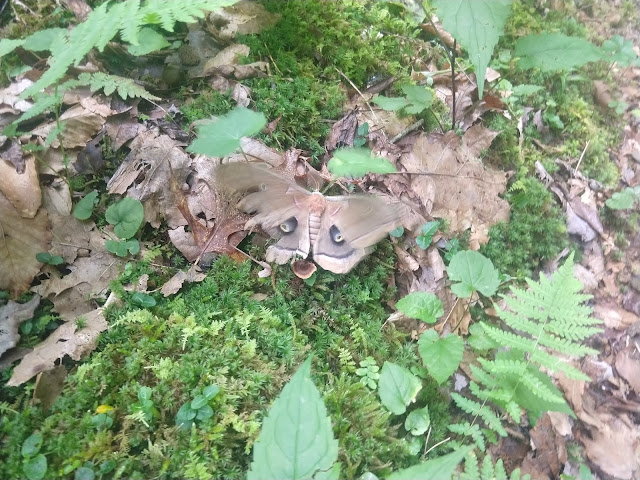 The rhododendron were blooming 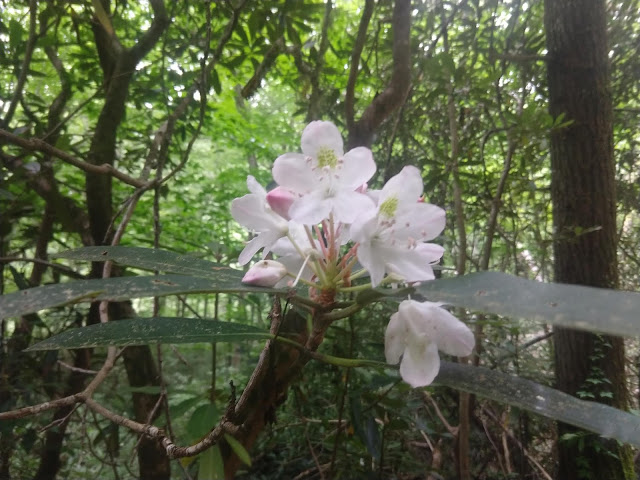 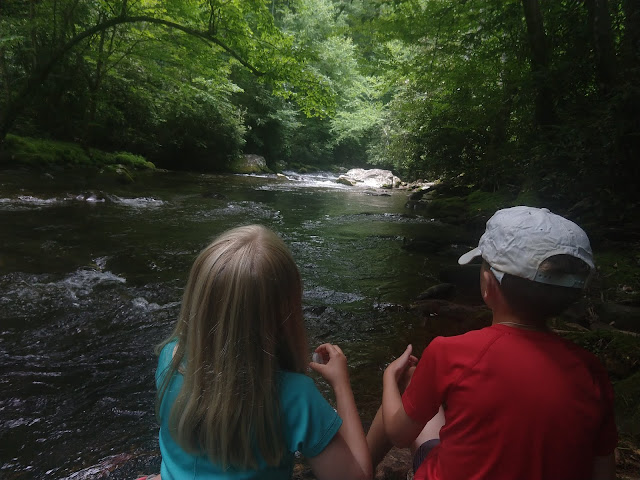 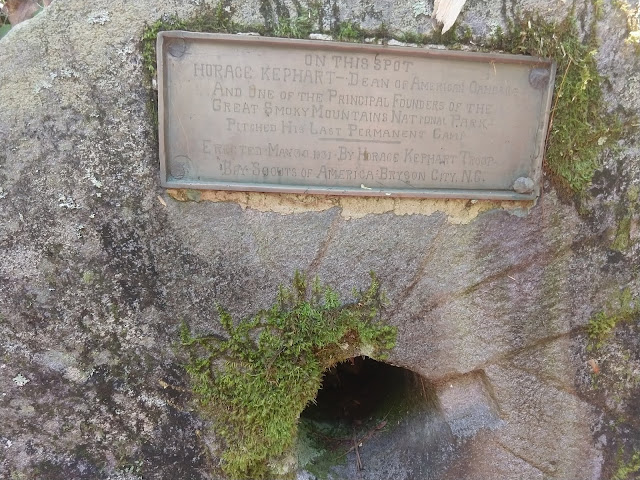 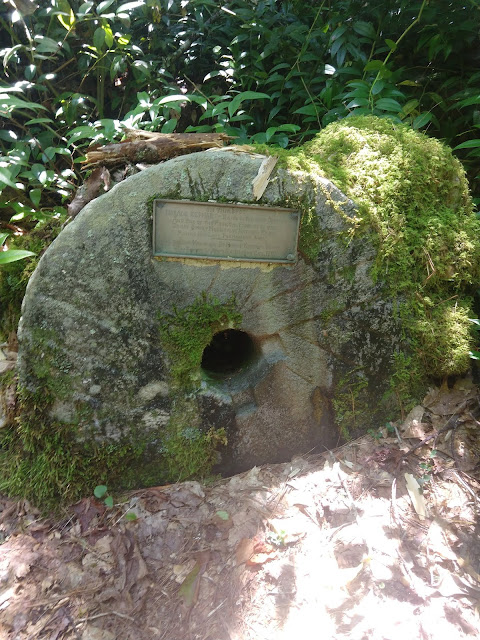 The trickle near site 57 occupied the kids for a little bit, but Deep Creek is not near the campsite, so no playing in the water. Also, the bugs were really annoying here. 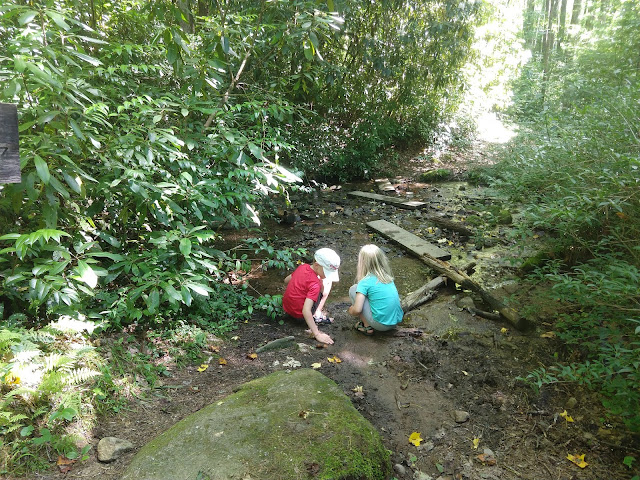 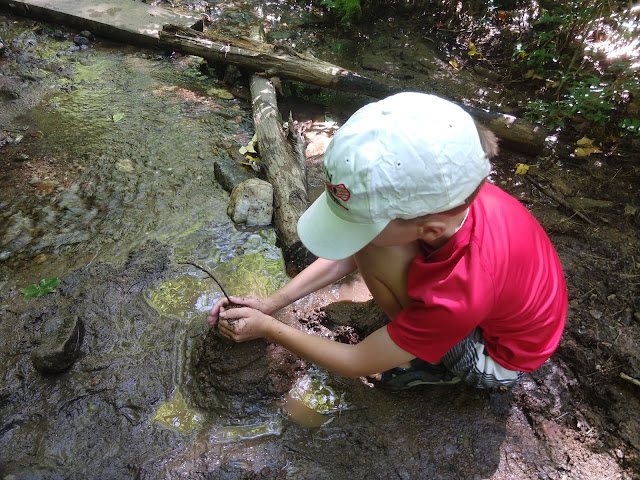 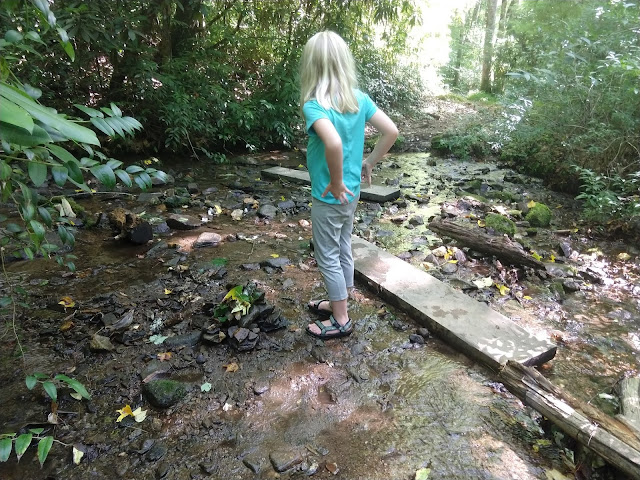 After dinner, we played Blackjack (good counting/addition game for kids) and talked about the next day. My original plan was to hike over Sunkota Ridge and down the Martins Gap Trail to Site 46. This would only been about 3 miles, but a 1000 foot climb/descent and from talking to the guys the first night, there was not easy access to the creek and it was a bit buggy. I talked to the kids to see what they wanted to do and suggested that we hike back towards Site 60 and maybe hike all the way to the car if they were up for a 6 mile hike.

A small waterfall next to the trail 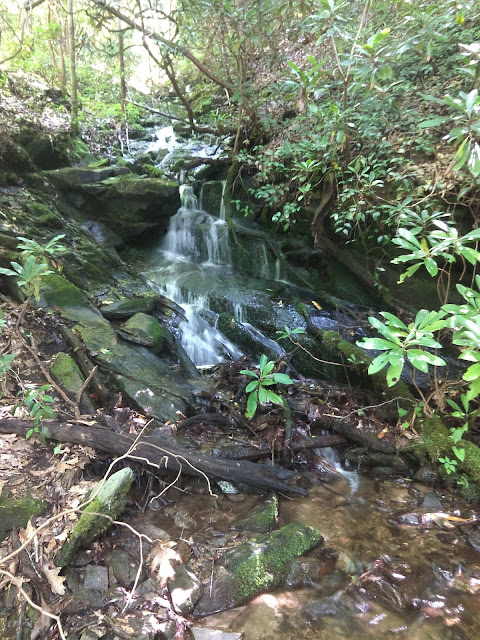 We got back to Site 60 around lunch time and the rest of the trail is easy hiking, so we continued on to the car. I asked my kids if they enjoyed the trip and they said it was "way better than staying home, even with the horrible bugs" so I guess it was a successful trip. Next time somewhere higher up with hopefully cooler temperatures and fewer bugs.

The older two kids were still in camp and my wife had a short work trip, so kid #3 and I went on a short kayaking excursion to Laurel River Lake in Southern Kentucky. The weather was perfect, warm enough to swim, but not crazy hot as we were paddling. 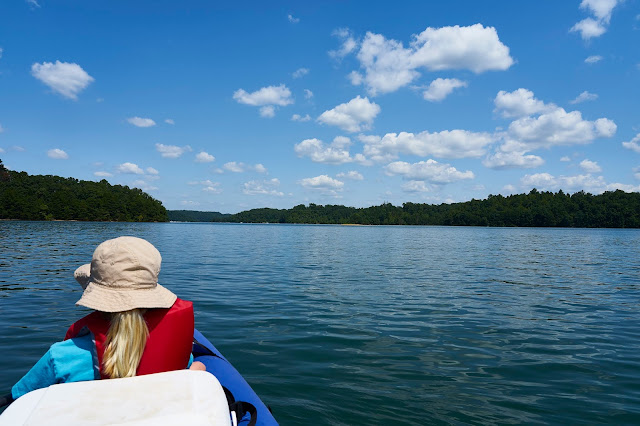 Once we got to the White Oak Boat-in Campground, we sent up and then played in the water and watched the power boats go by. 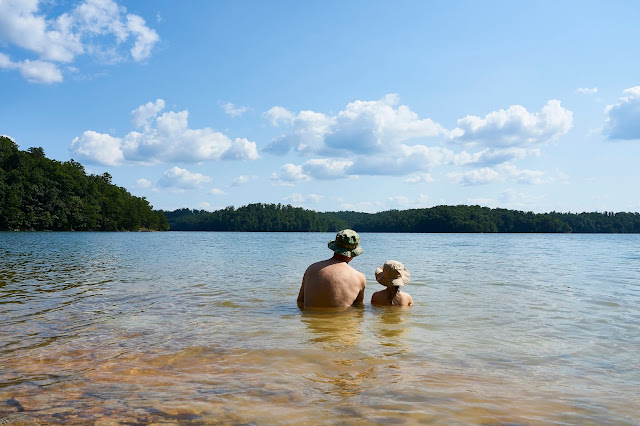 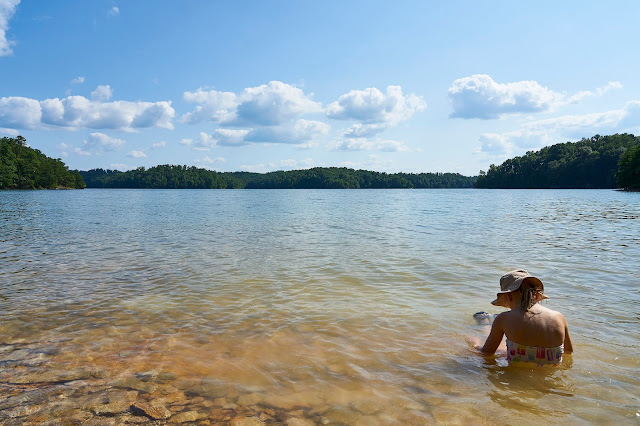 There is a bit of a beach, but the lake level was really high, so the beach was pretty small. She still had fun digging and splashing. 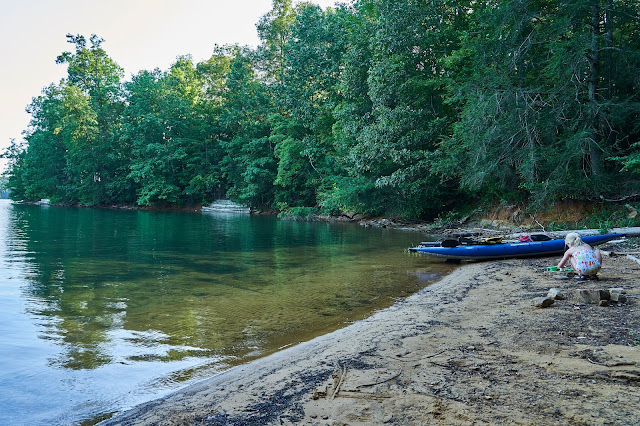 There was an attempt at skipping rocks, she needs some practice. 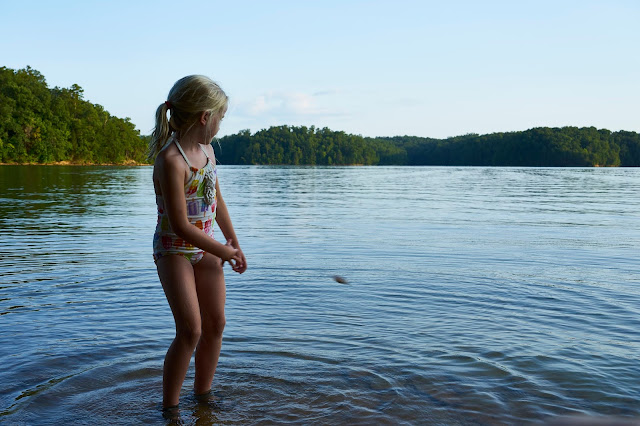 Then we had dinner and waited for the stars to come out. We saw Jupiter and Saturn and a couple fireflies and a couple bats. 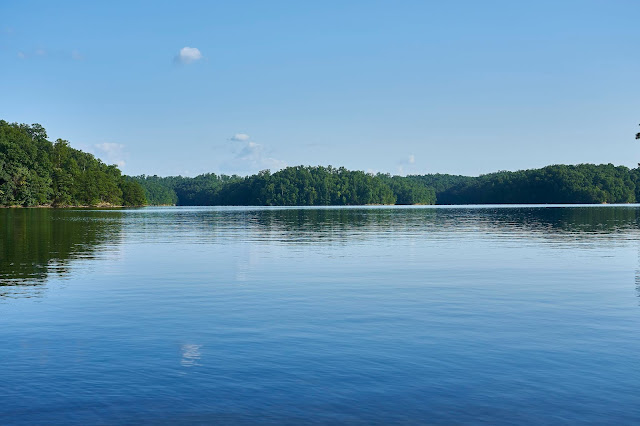 Next morning, we packed up and then paddled back towards the boat ramp, had a nice day and got home before mom. Super fun trip, we both agreed that next time we need to go for at least 2 nights.
My trip reports: backpackandbeer.blogspot.com

Looks wonderful - your kids are great hikers and campers!
You must log in or register to reply here.