I hope to be able to edit this with a device with a keyboard. If I say something odd, blame autocorrect.

I had some new friends who needed a shuttle so they could do the Thorofare. It ended up that I could hike down to their first campsite with them, so I did. They were coming from a different direction, so the deal was that I would start when I got to the trailhead and they would start later.

The trip started at the 9 Mile Trailhead. I'd been there often, watching bears. There are two bears that frequent this area, both grizzlies, and they were foremost on my mind on this whole hike. I yelled a lot, and loudly. Of course, I didn't see any Grizzlies.

This is the view from Lake Butte Overlook. I would be going to Park Point, which is 6 miles down the shore, on the left. 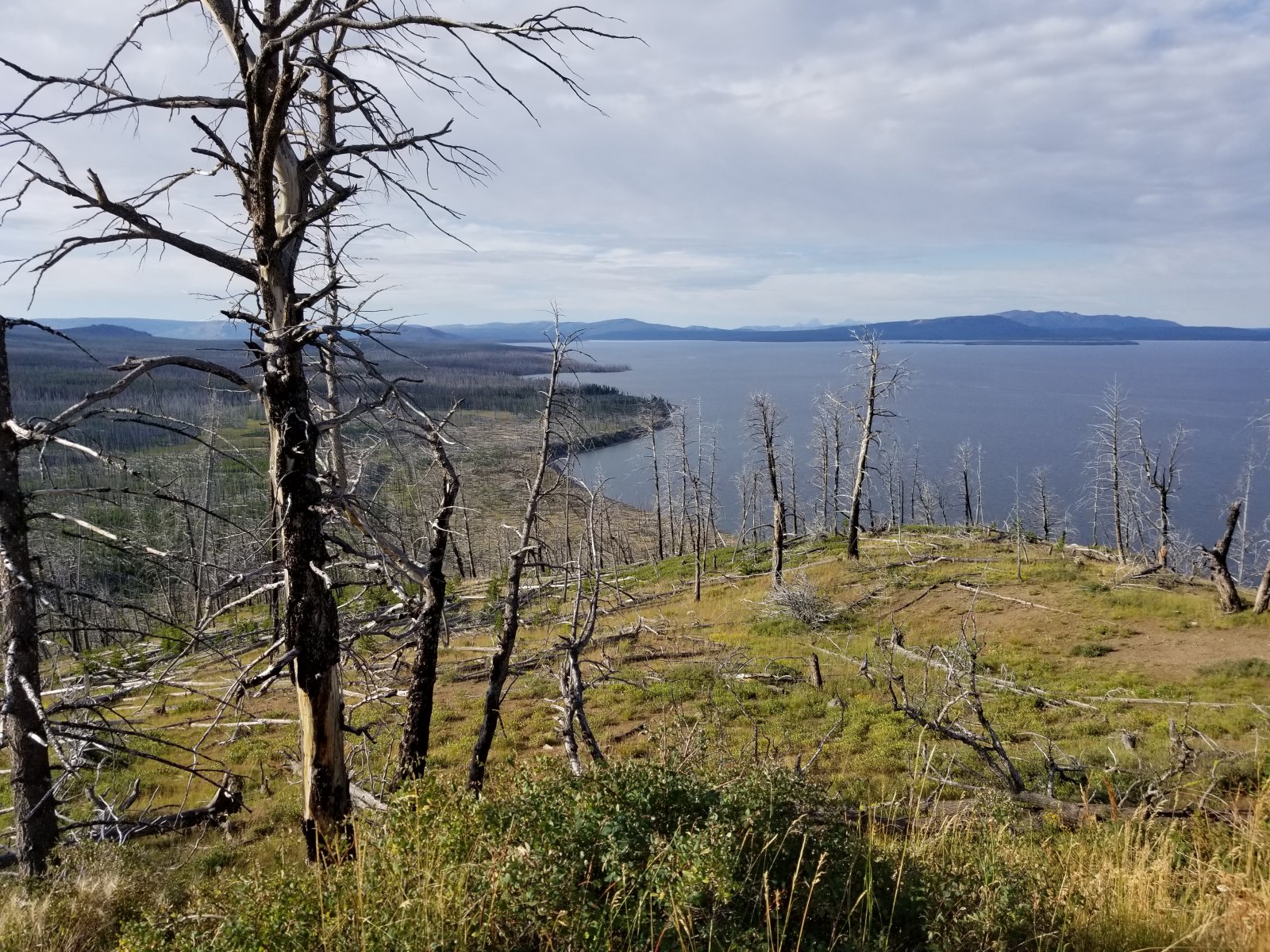 A lot of the trail went through an area that had burned in 2010 or 11, based on what I had read. The were views of the lake [Yellowstone Lake] through all the downed trees. From experience, I knew that seeing grizzly bears among the downed trees could be hard. I kept my eyes open and yelled a lot. 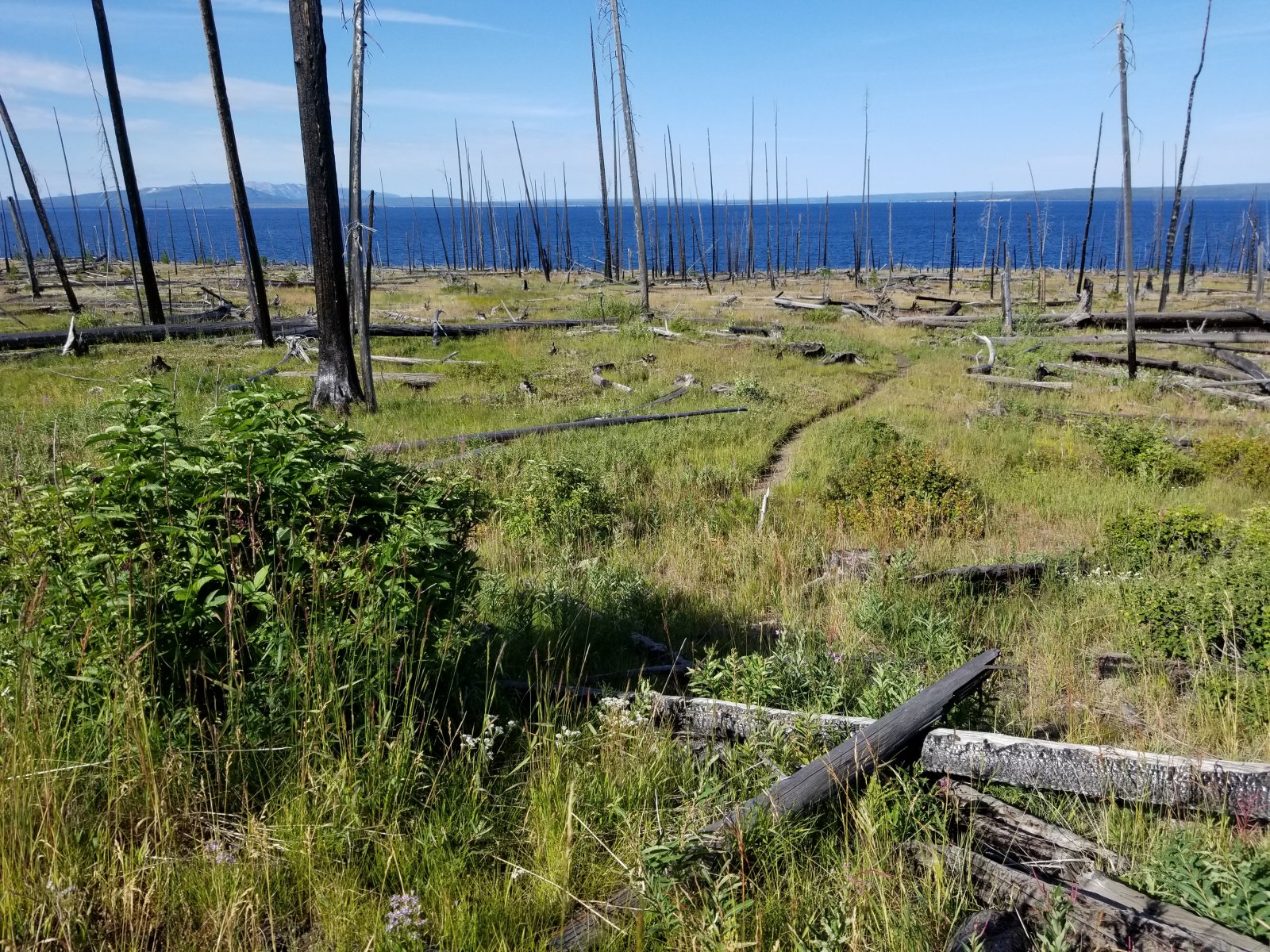 It was a nice day for hiking. The sun was out and it would have been hot, but the wind was blowing actively. 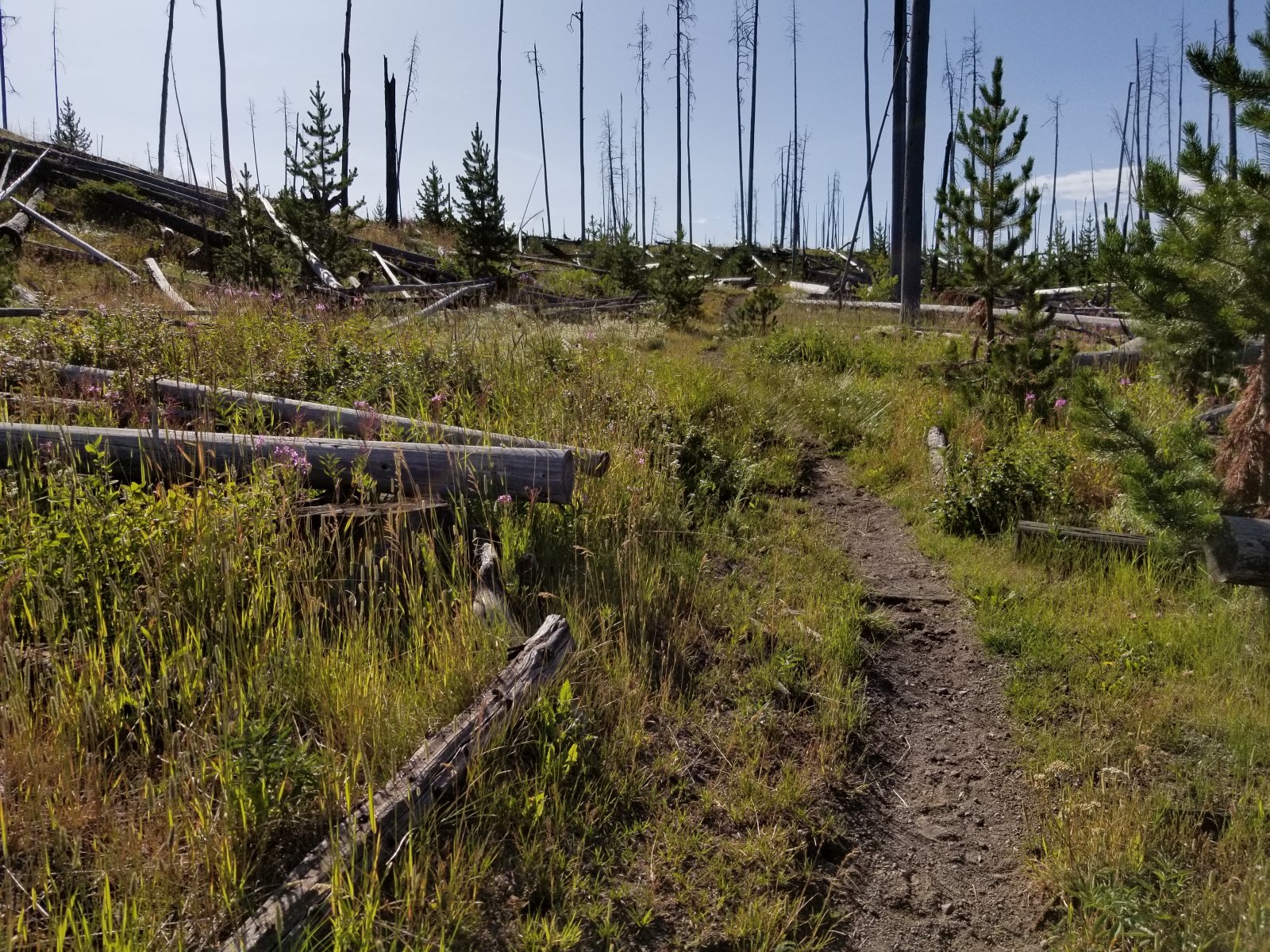 Much of the first portion of the trip was in the open, like this. 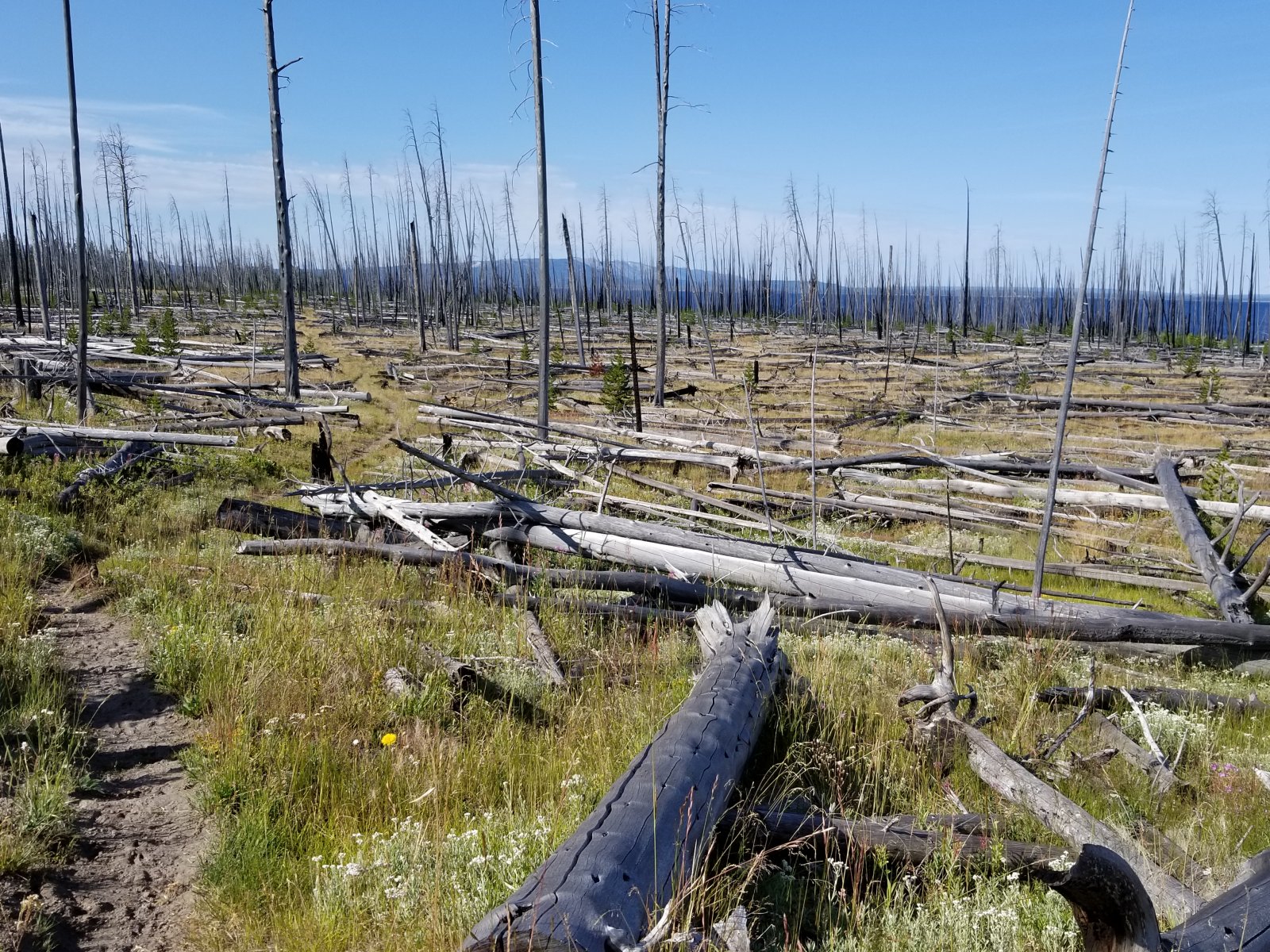 The were some wooded areas, but not a lot. 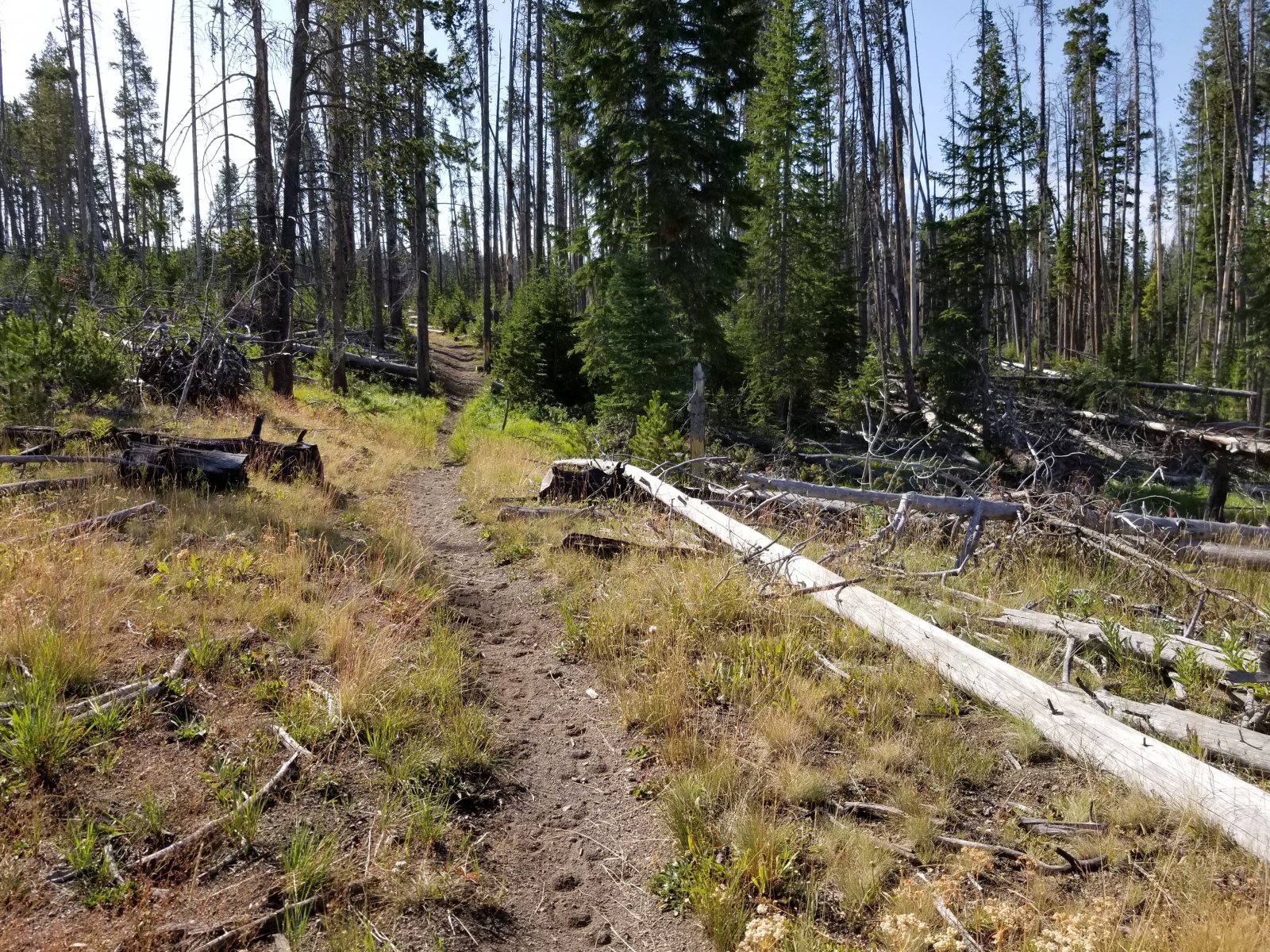 There were to be two steam crossings. Both were in wooded ravines. I don't like water crossings, but the first was not a big deal. I got both feet wet, because I didn't want to take a chance of slipping, but it was inconsequential. 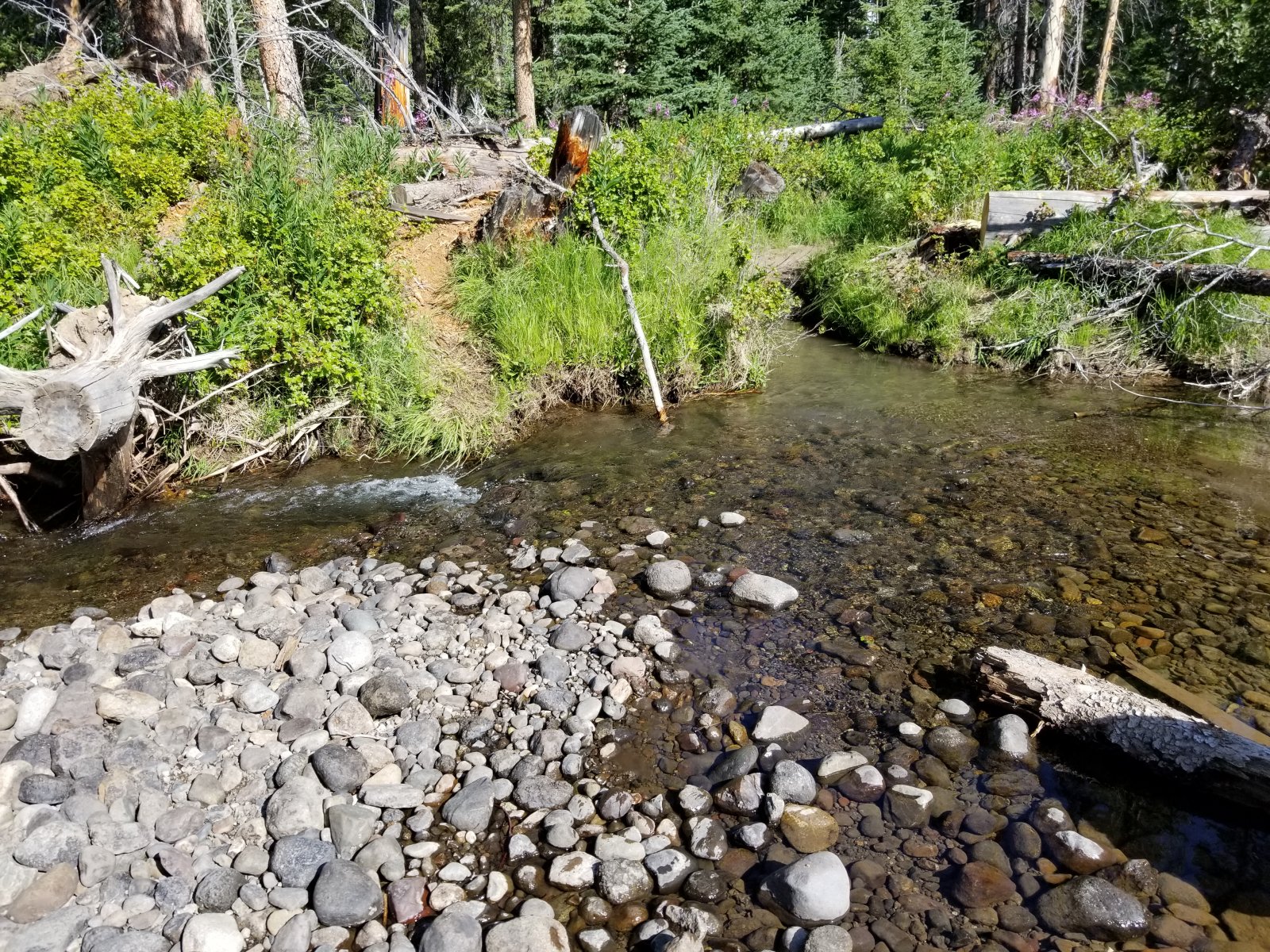 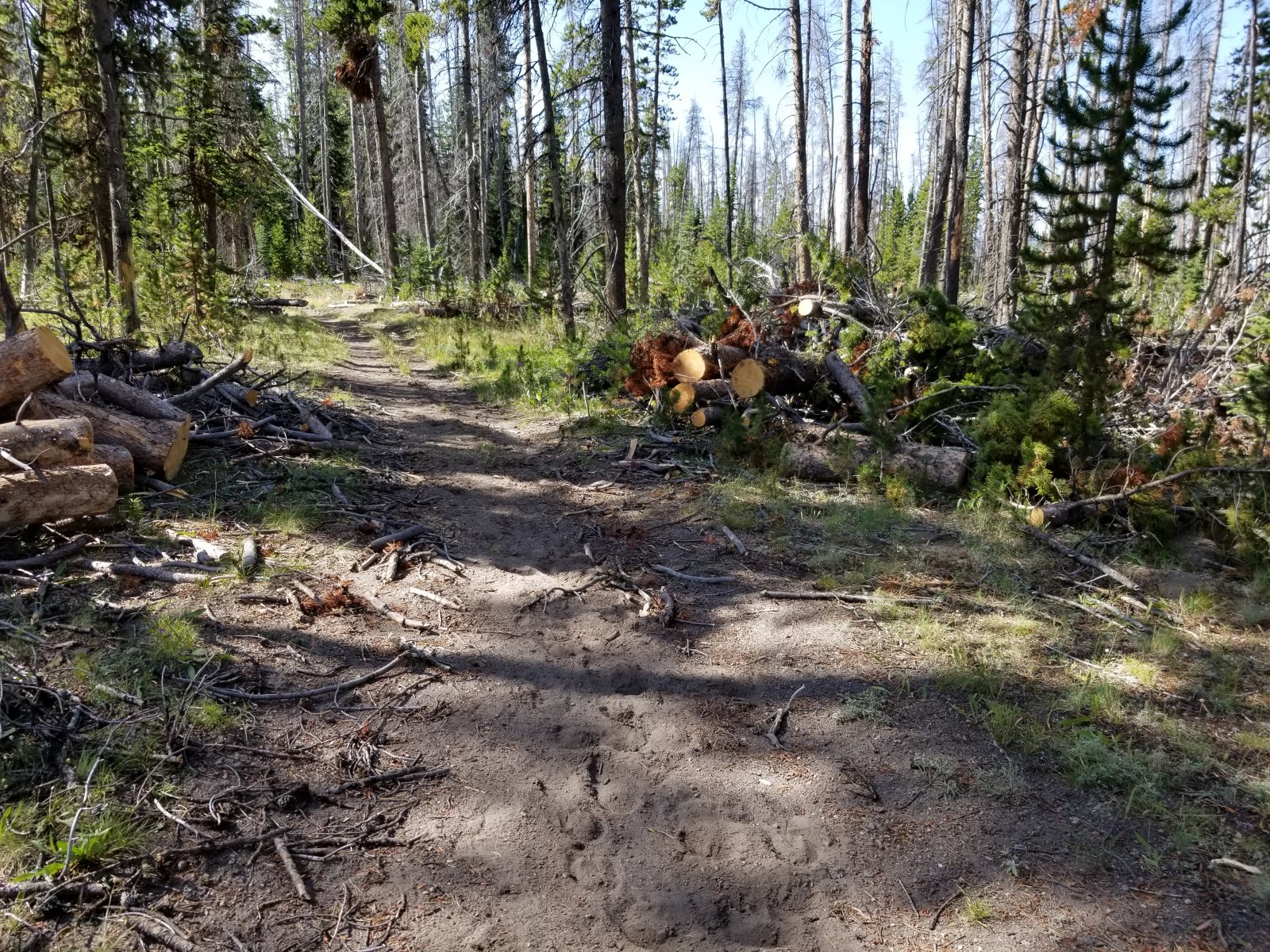 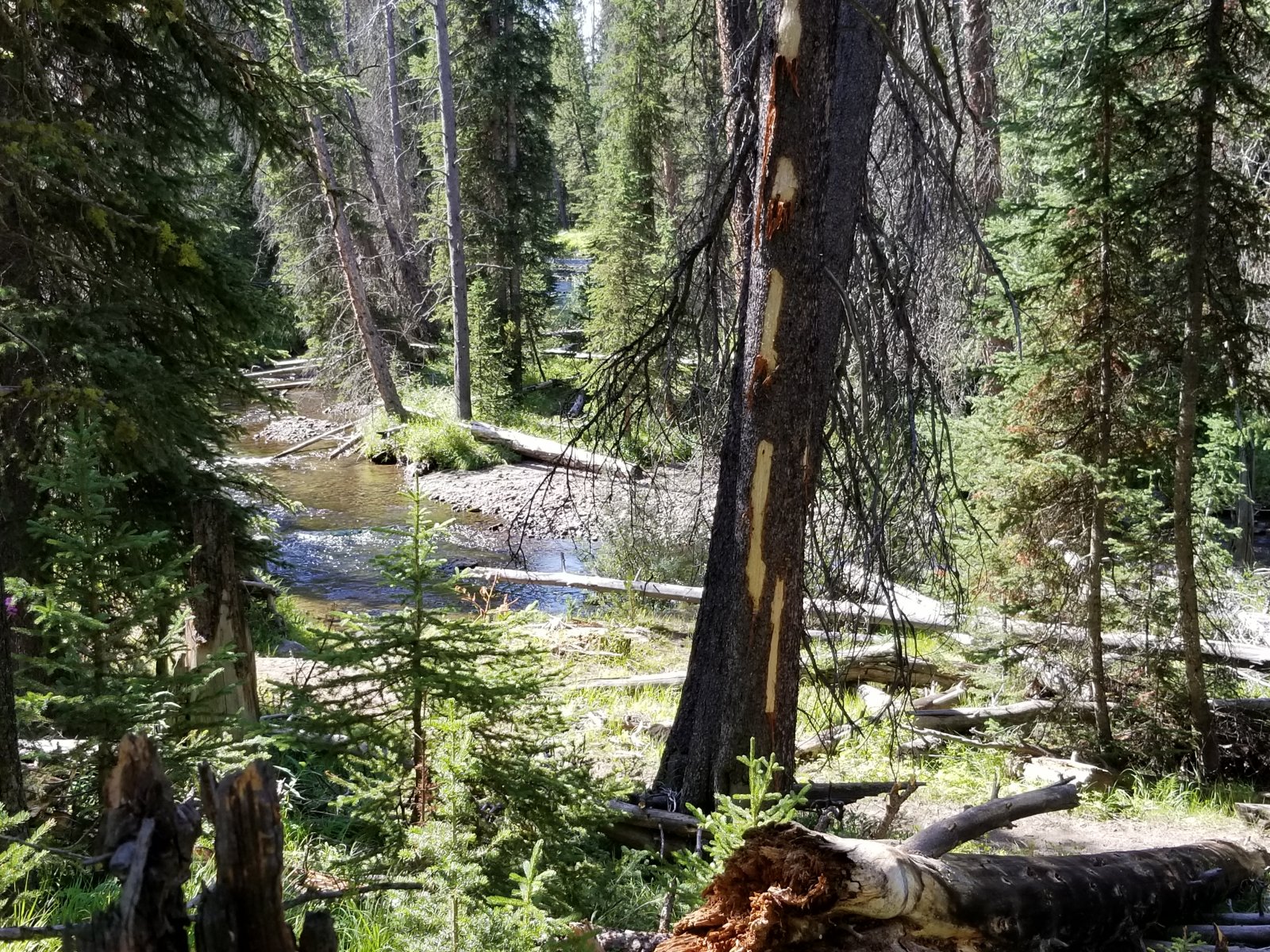 The second stream was bigger. It, like the first one, was a bit less than knee deep, but it was wider, and the bottom looked to be covered in slick moss. I took it slow, and had no problems. As a matter of fact, I didn't think about it again until I did it on the return trip the next day. 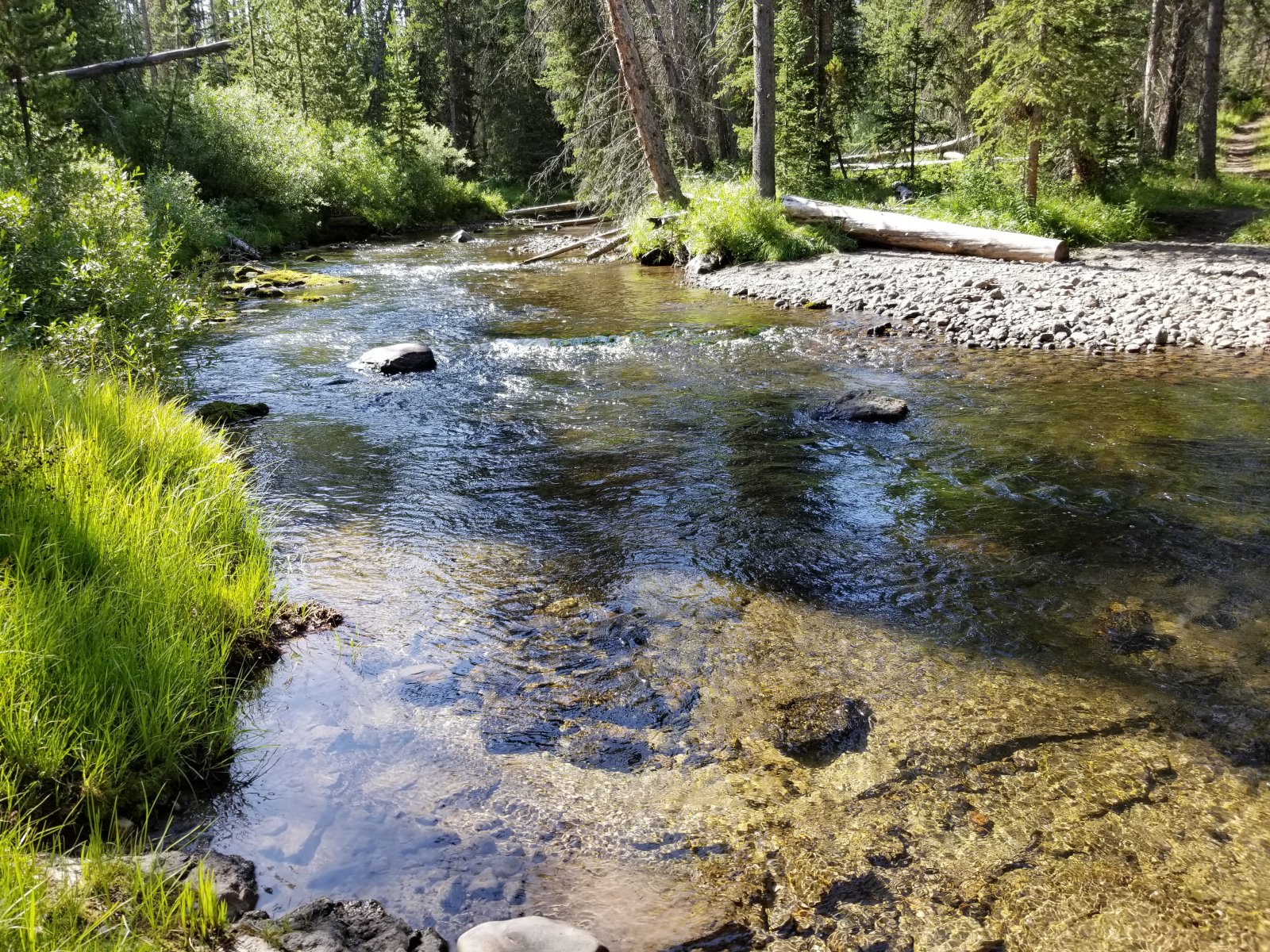 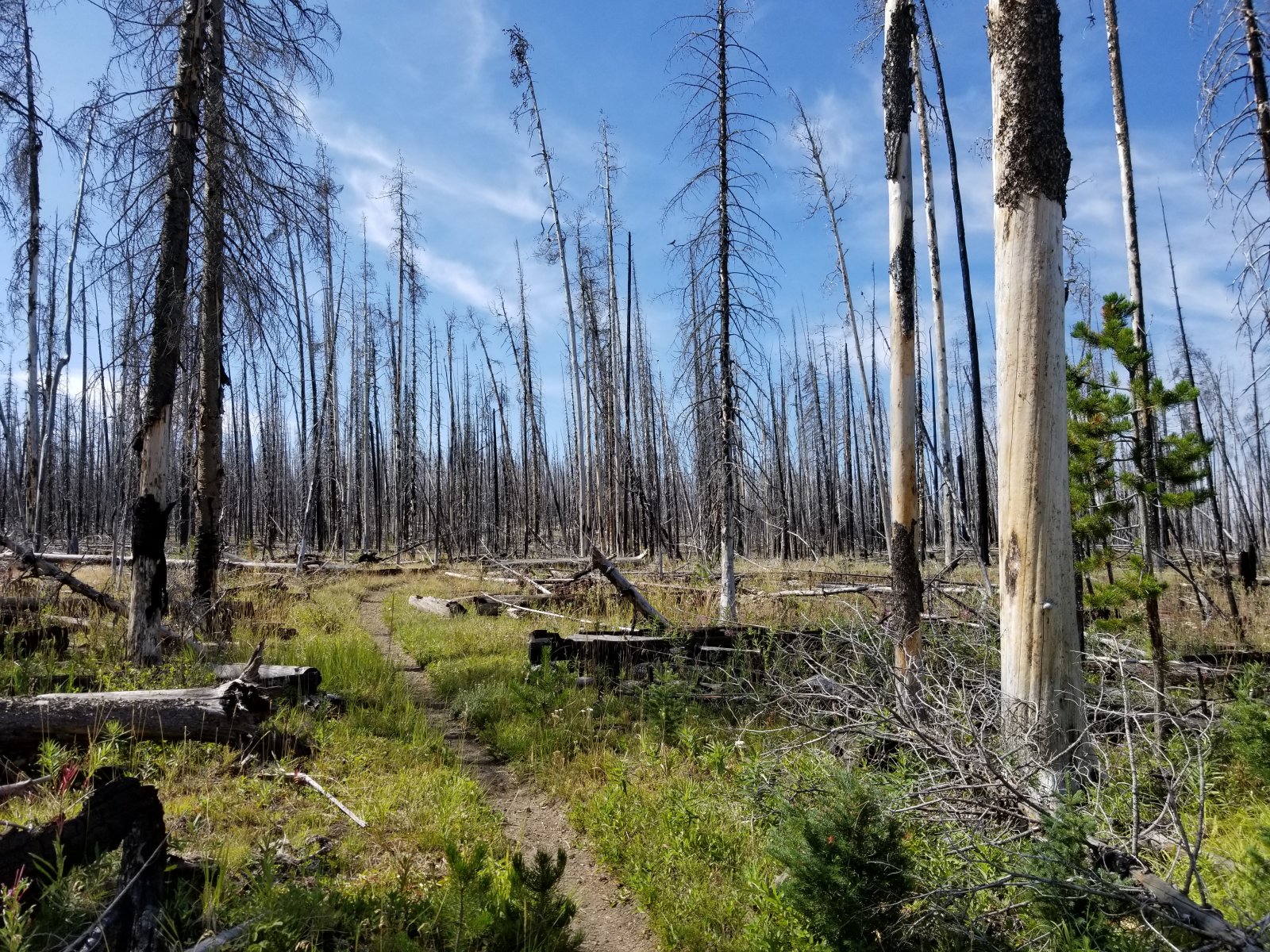 The last mile or so was in trees, and involved climbing and descending a hill. The little meadow on the left was very near the campsite. 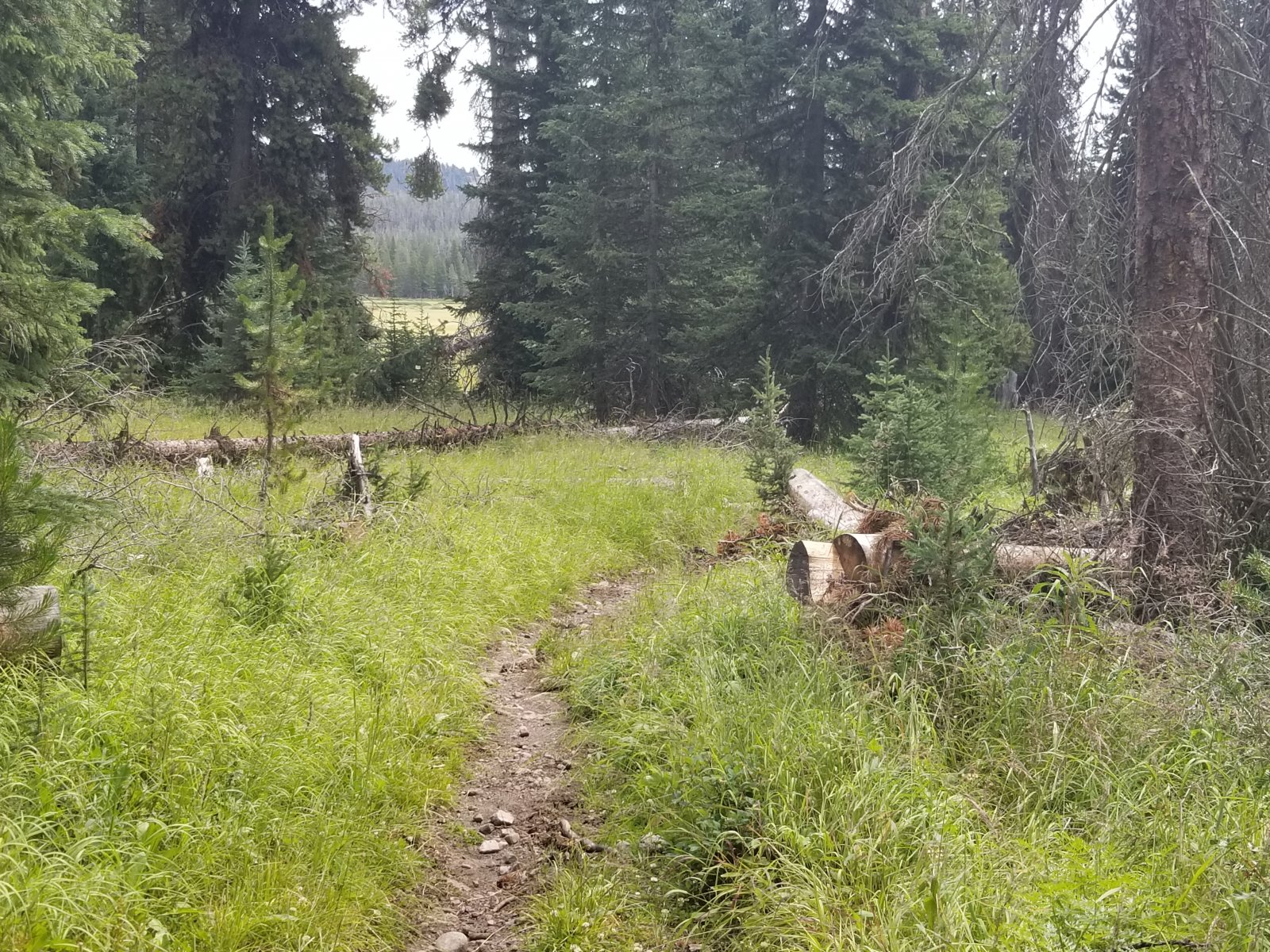 This is the view just as you get to the campsite. 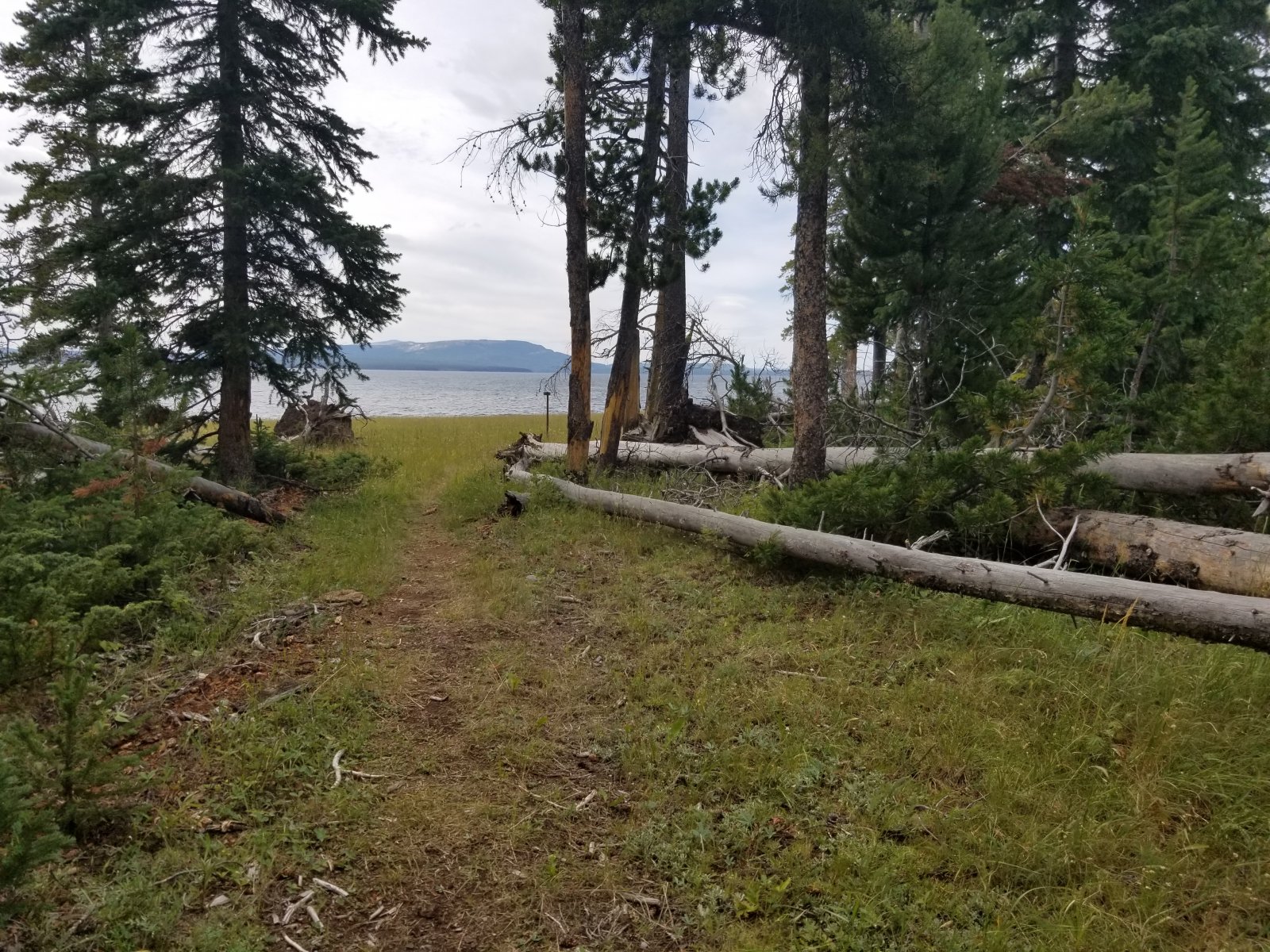 Between the two trees, you see The Promontory.

The lake was throwing a snit. I used to live by Lake Superior, and love watching an angry lake. This so reminded me of Superior. 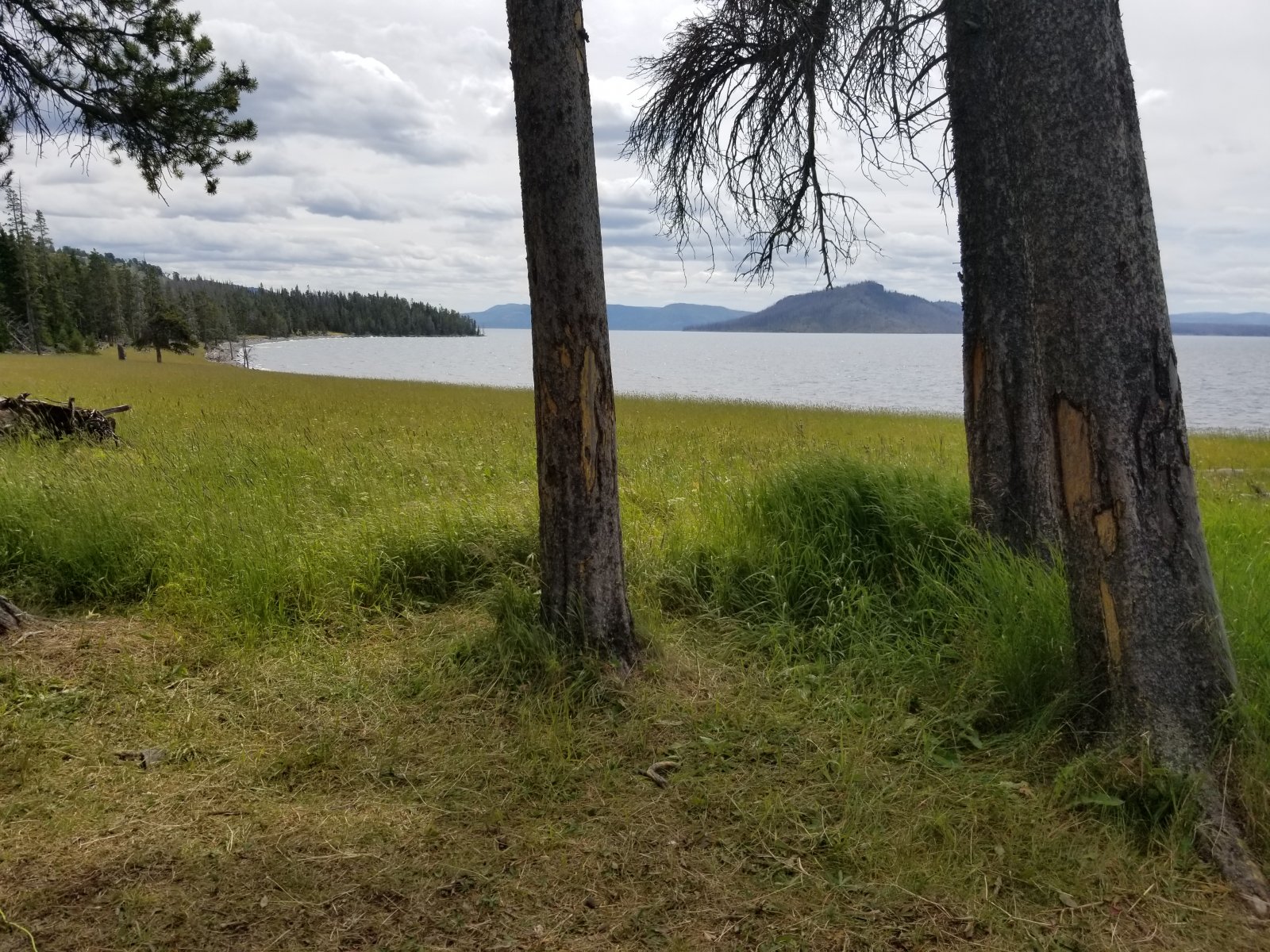 I hung my food and looked over the camp kitchen. Nice location, and the wind sure kept the mosquitoes away. 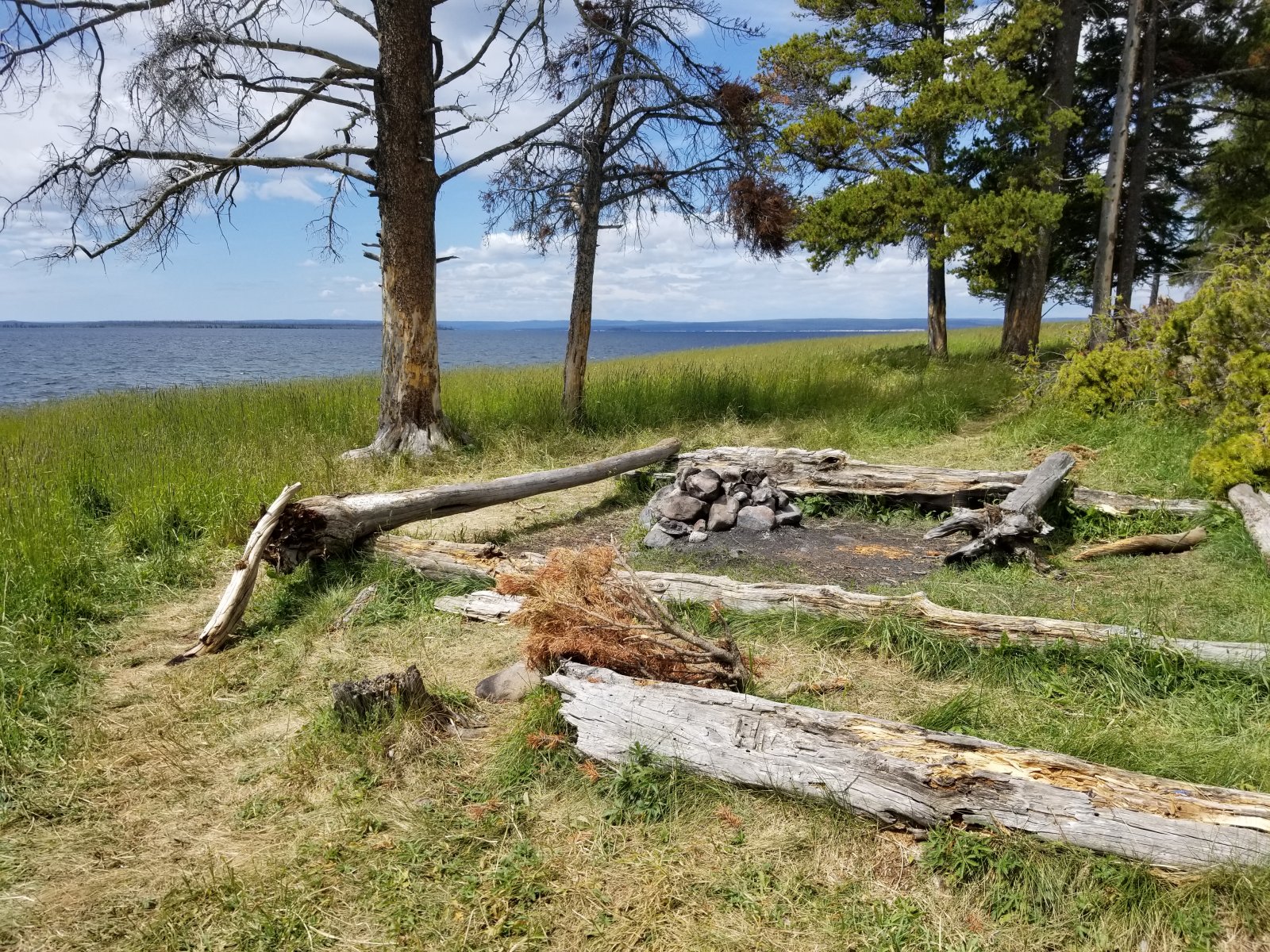 My tent offered a nice view. 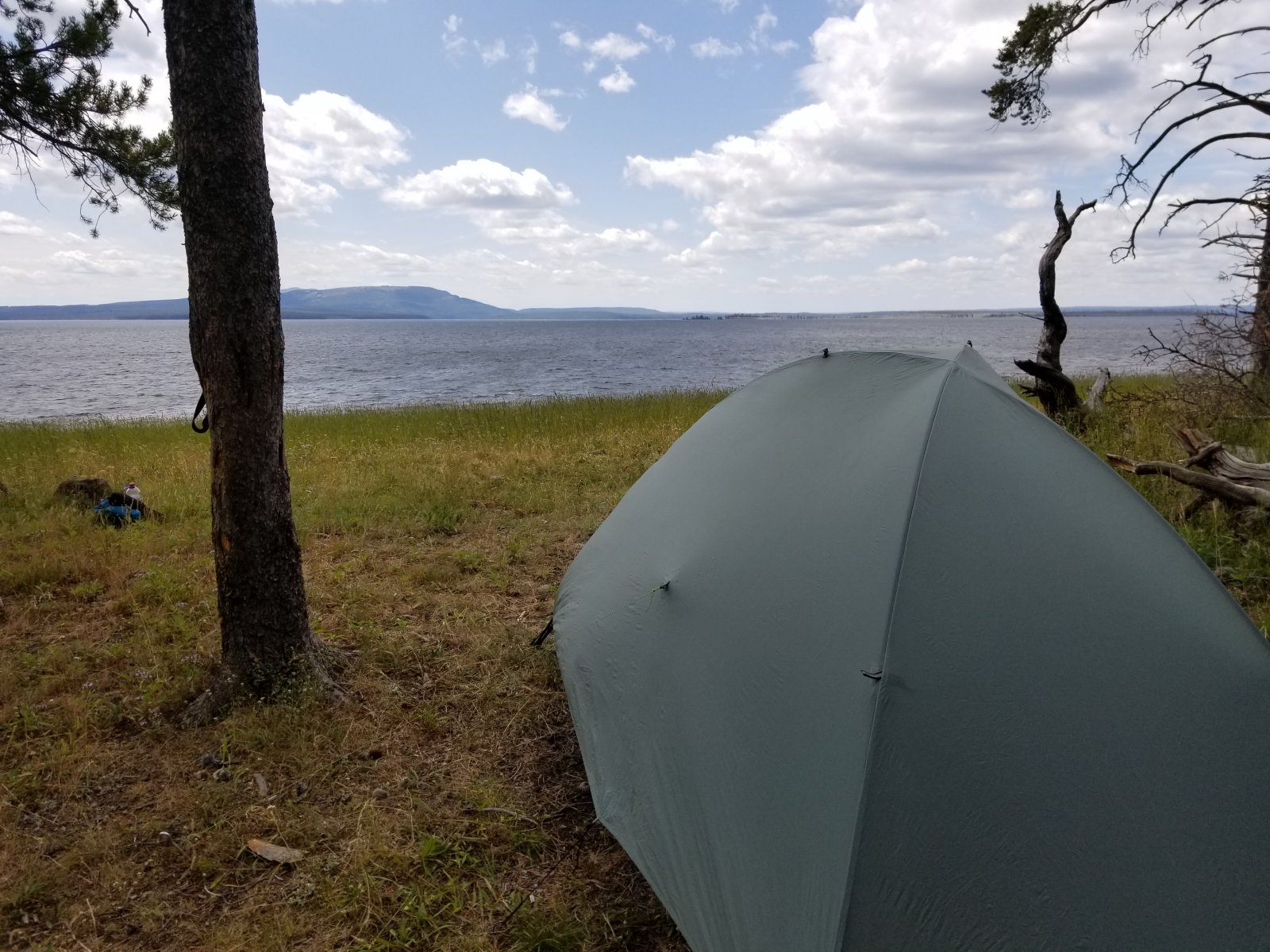 The lake was choppy. I got water and went back up to the campsite. 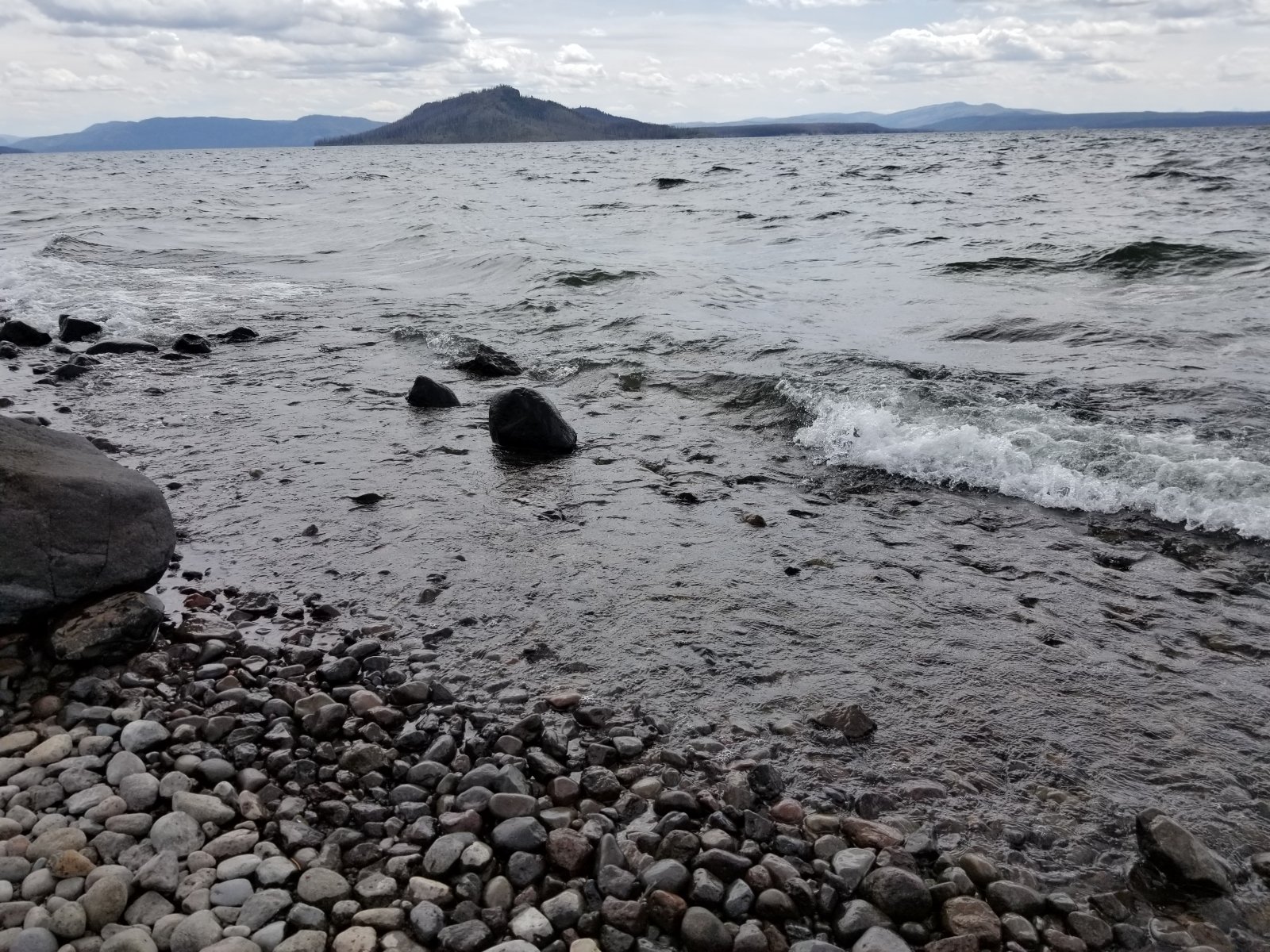 The Tetons peeked over the horizon. 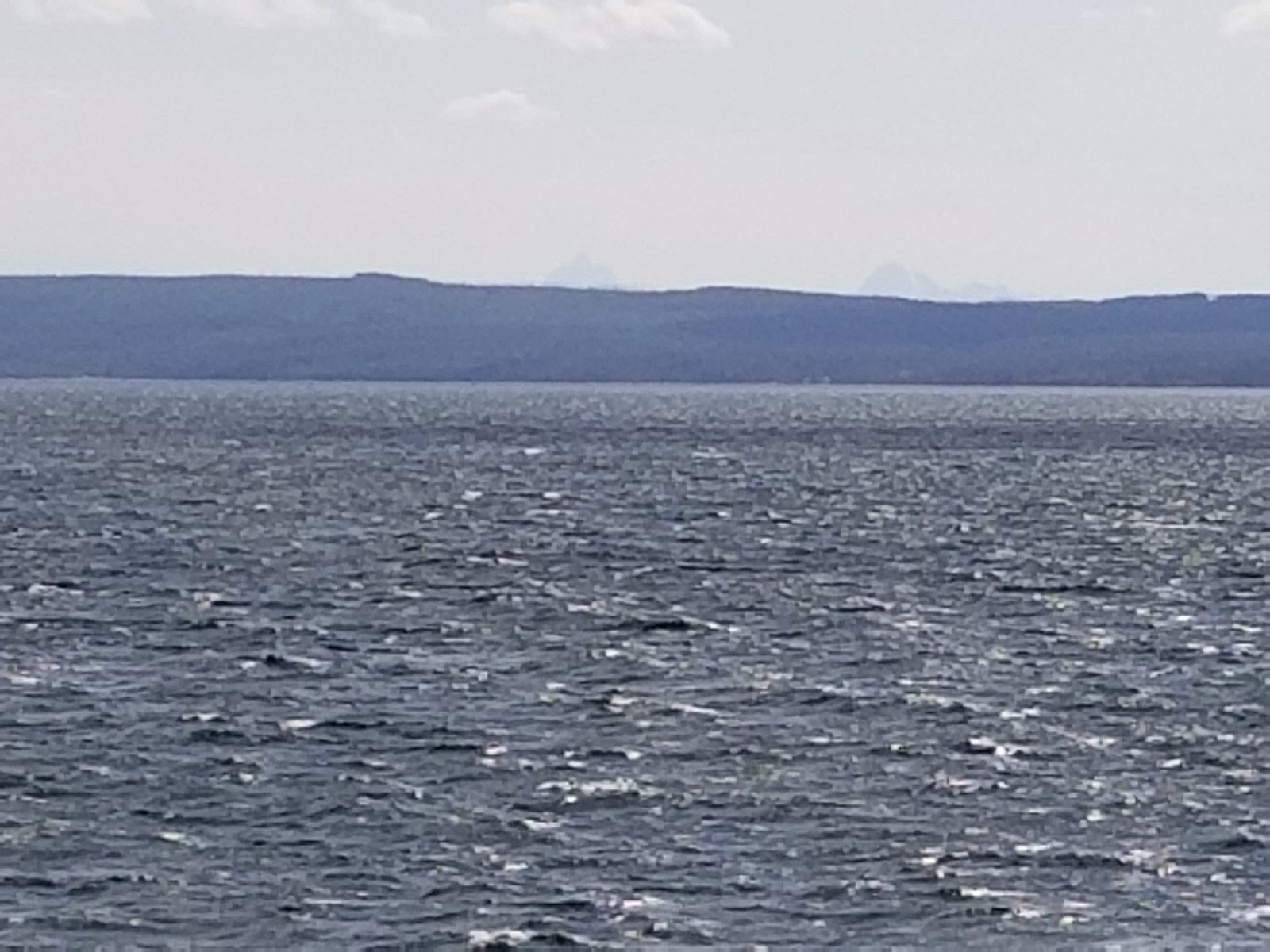 My friends arrived in time to eat and set up camp and share stories. 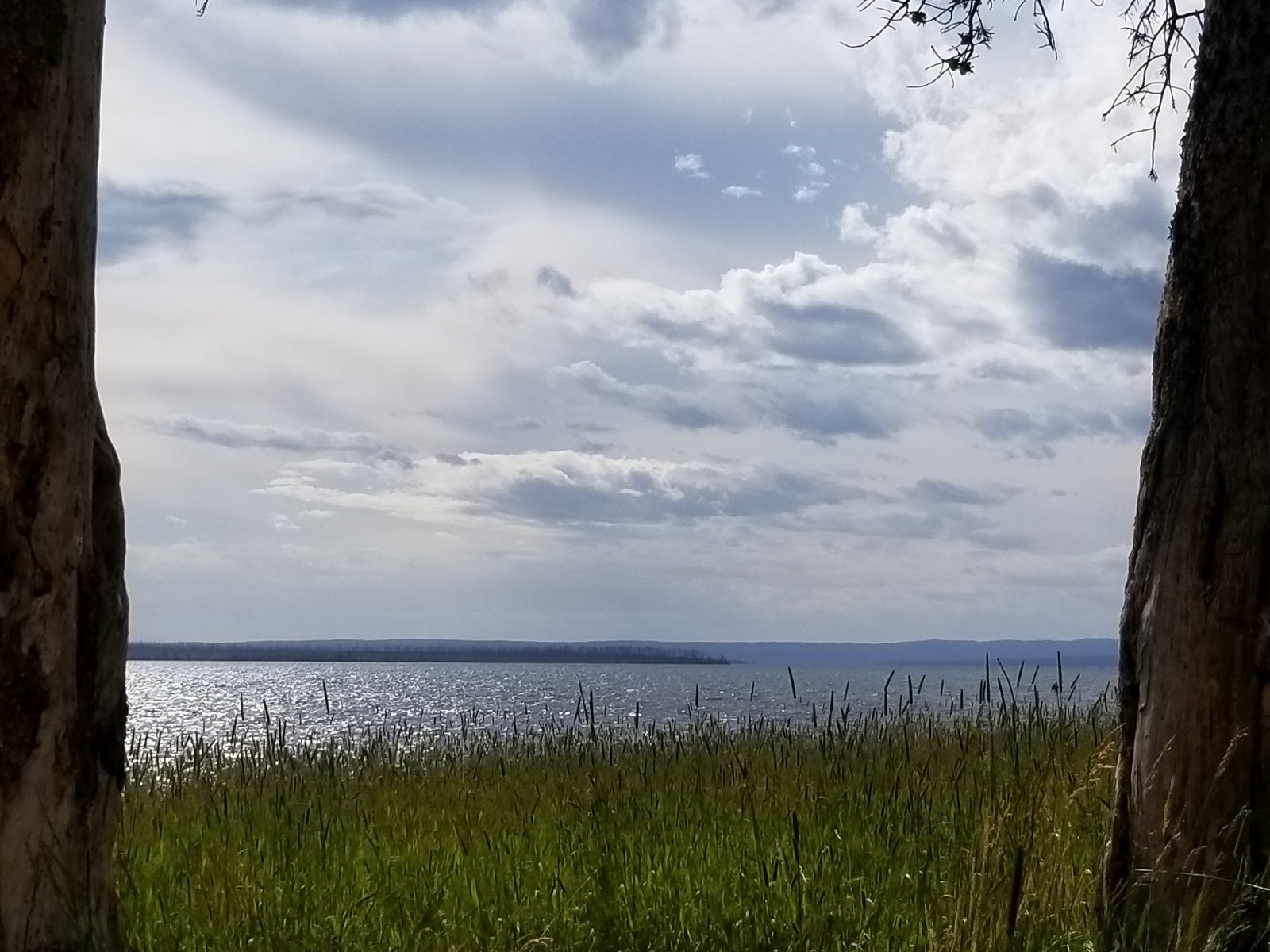 It's amazing when a special place gets more special. 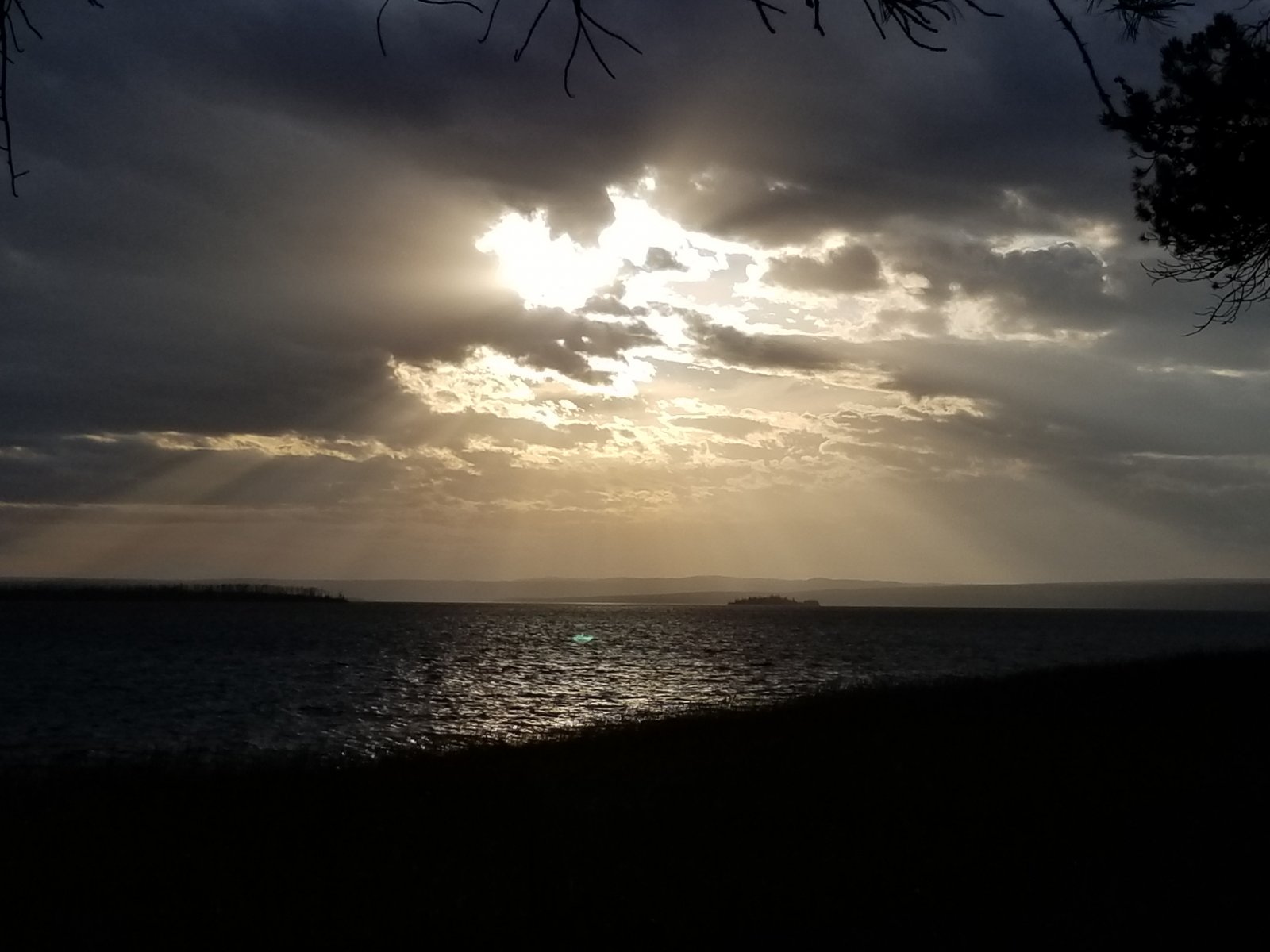 And then doubles down. 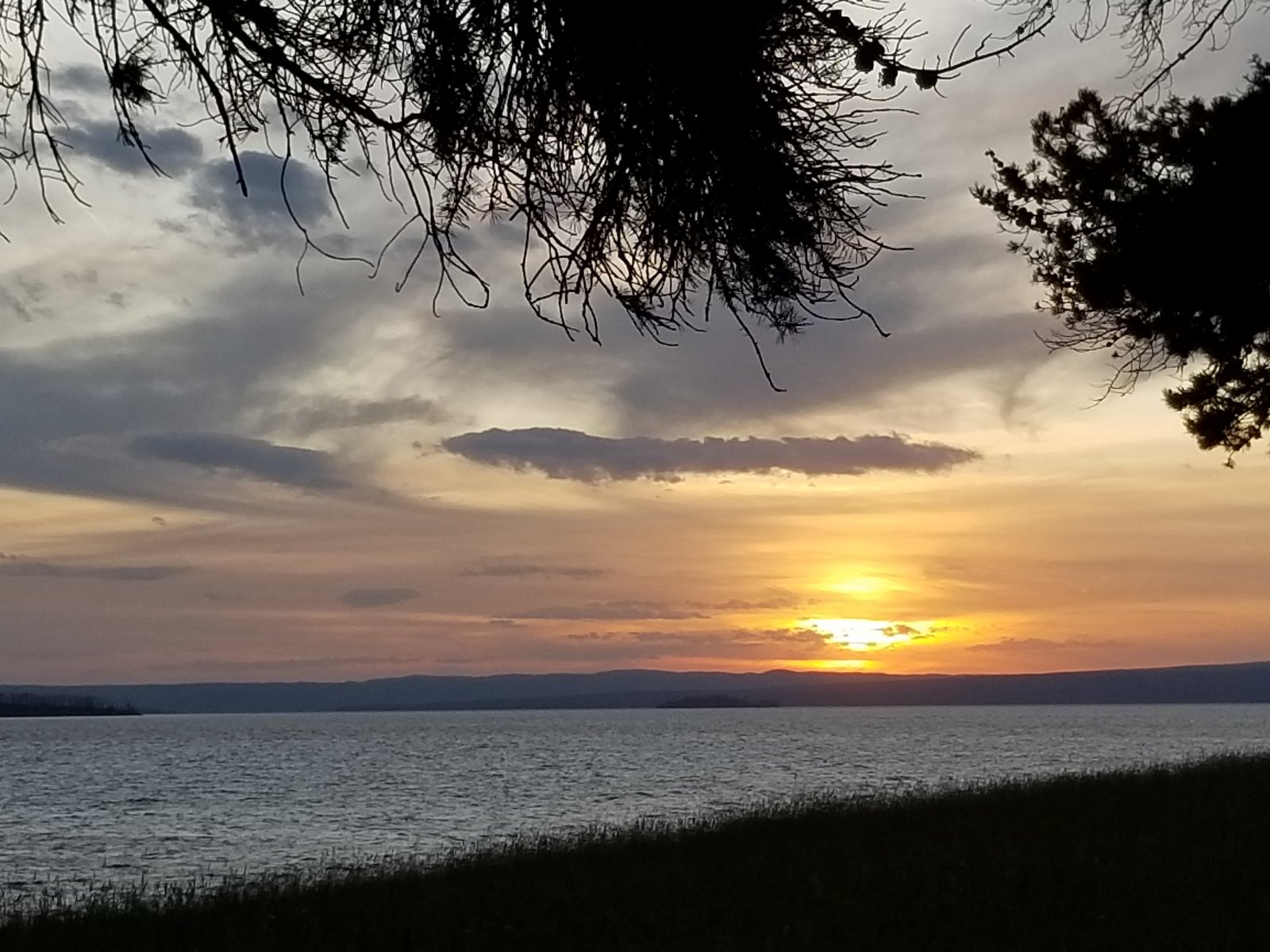 The next morning the sky was pink and the moon was still high. 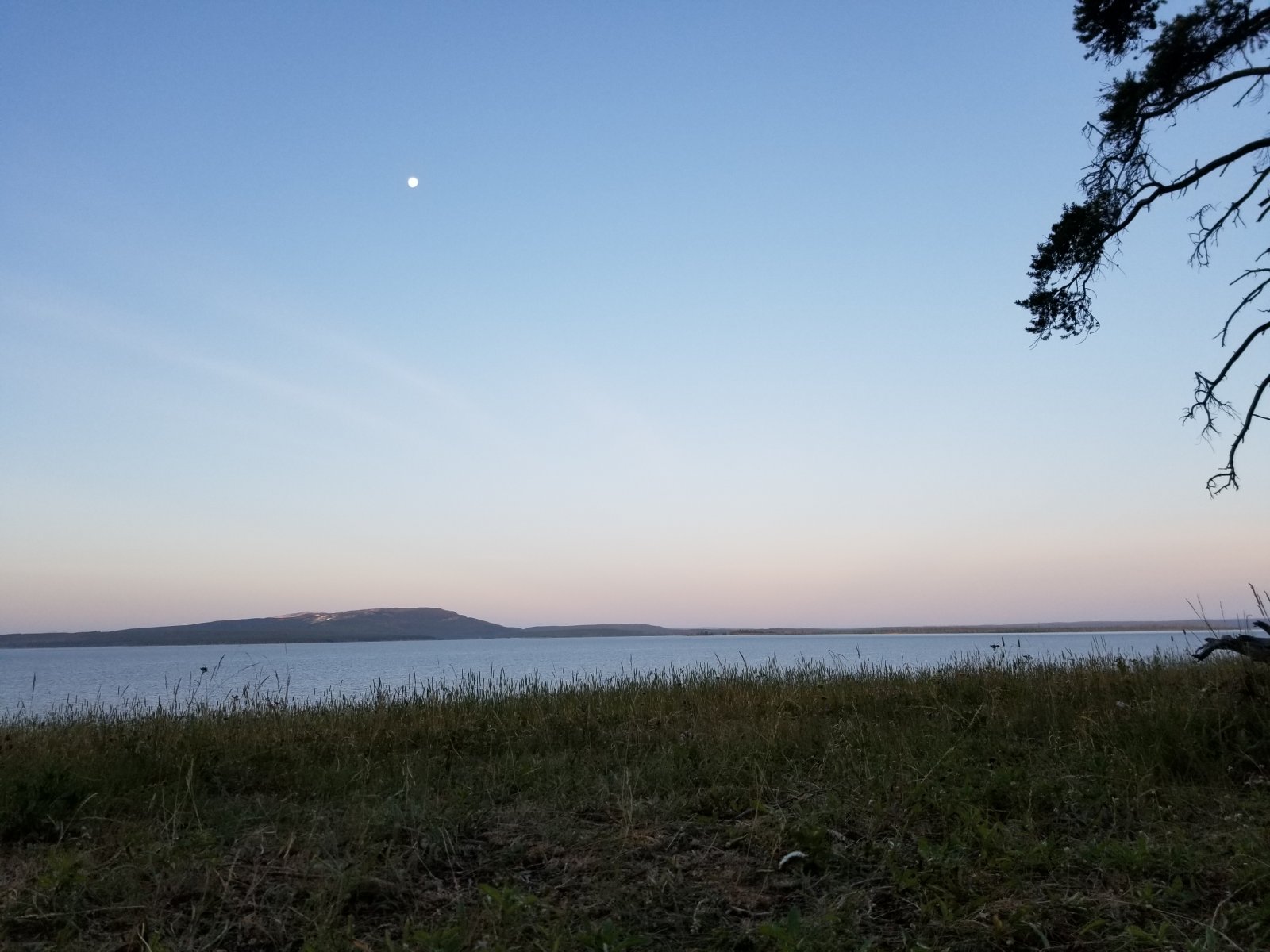 My friends and I headed back to the trail together, but at the intersection, they headed south, while I headed north.

I retraced my steps, actually enjoying the two steam crossings, and eating some whortle berries that my friends described to me. They were quite good.

I saw this eagle, but that was really the only wildlife I saw. I picked up the couple at the South Entrance a week later. I got there just a touch after they had forded the Snake River. It was wonderful listening to their stories, as we worked our way back their car.

I hope to go back to Park Point, and maybe further. I sure loved camping by the lake... 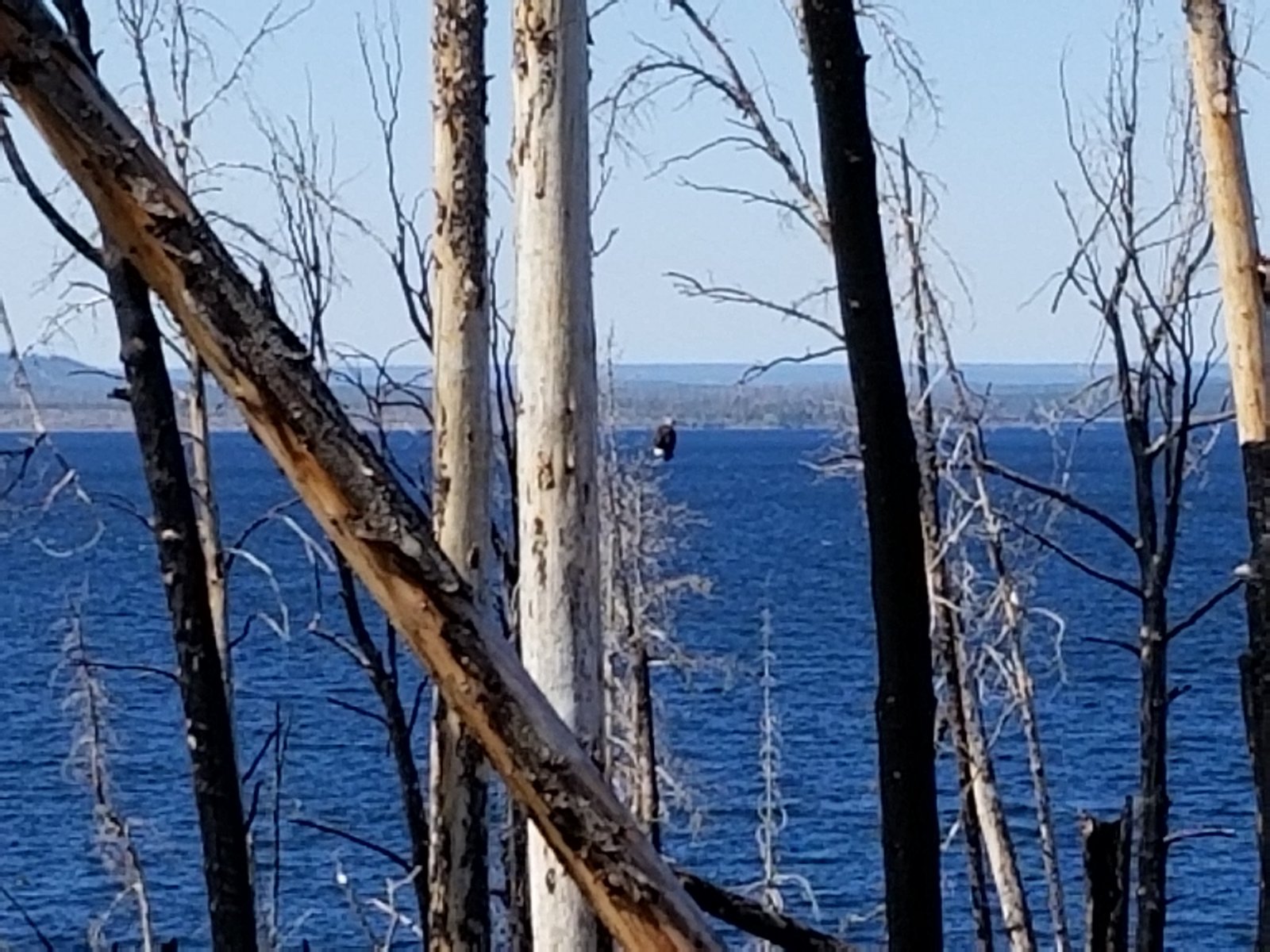 Really cool shots of the lake through all the snags. Looks like an awesome stretch of trail!

Thanks for the report. I really like your first shot from the overlook which gives a really nice perspective of the eastern side of the lake.
P

Thanks Scatman. I always love your reports. They’re so much more adventuresome than mine. I’m happy with the things I see, though.
You must log in or register to reply here.
Similar threads