Will be doing a series instead of one big long post.

Started out at 6:00am from Peach Springs to the trailhead at Hualapai Hilltop in some snow, which had arrived Sunday night. It got very cold and I hoped the road didn't ice over or get too much snow. It is a 60 mile drive from Route 66 to the trailhead and it is open range with elk thrown in, so it was best not to speed to begin with. Besides, it was some pretty scenery as well. 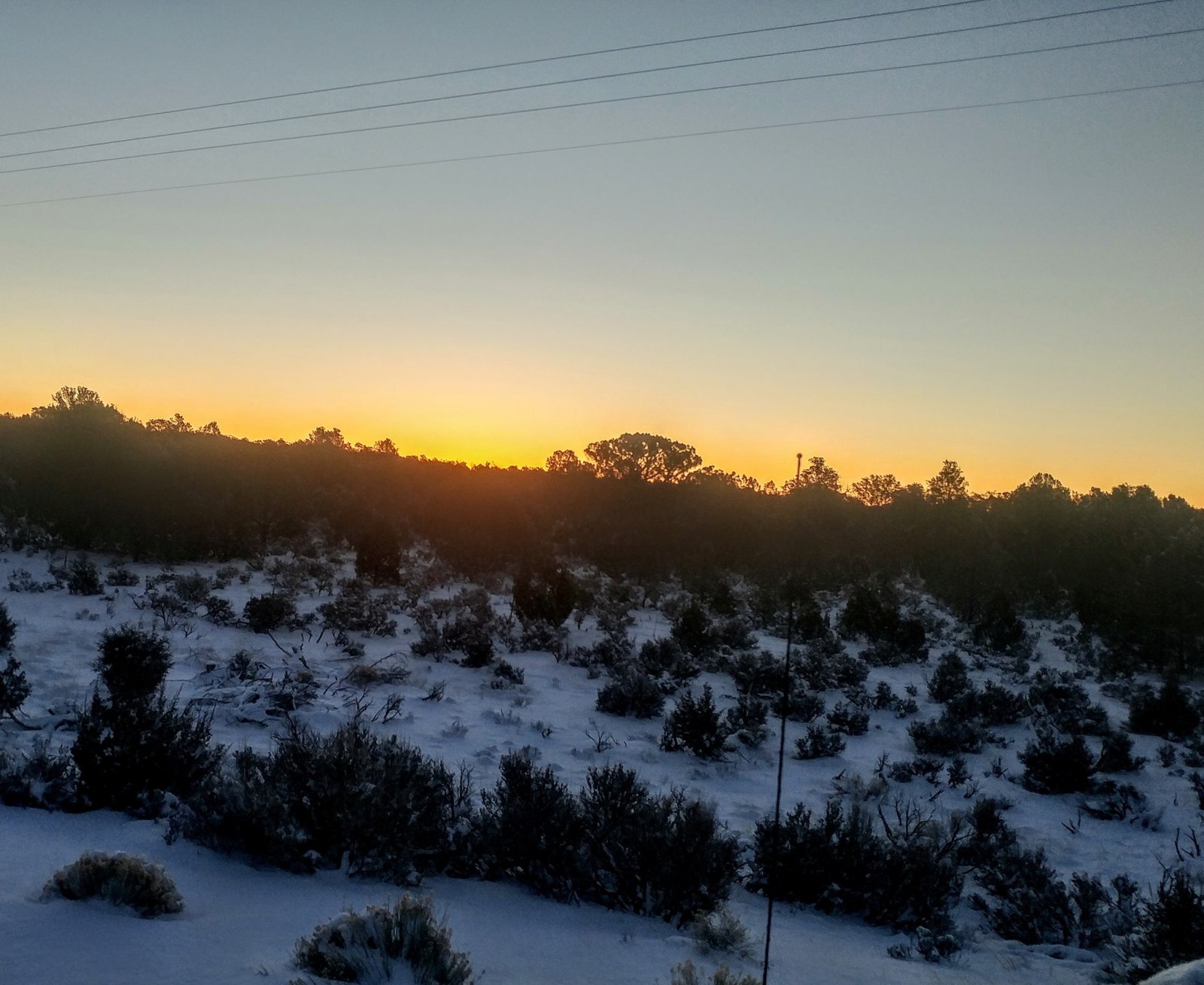 The road was covered with fresh snow and only a track or two ahead of me. Judging by some skid marks I saw, it looked a little icy at times. Drove about 35-45 mph through it, and it got about 4 inches thick in a spot among the Ponderosa. No problem for my truck though. When I started heading down the final ravine that takes you to the trailhead, I noticed skid marks taking a car into the guardrail. Guess I better slow down some more. Some elk were up on the ridge keep a watchful eye on me, or hoping I too would lose control and hit the guardrail. Got to the trailhead with no problems and it was busier than I expected it to be. Yep. Snowy and icy. People were sleeping in their cars, or trying to. Two ladies I would team up with later on told me they didn't want to unpack their sleeping bags to get into so they just kept starting the car up and running the heater for a bit. It was 16 degrees. I was going to do the same thing, but my wife made me stay at a hotel. I was going to bring the generator and a little heater to keep warm, but she won out. 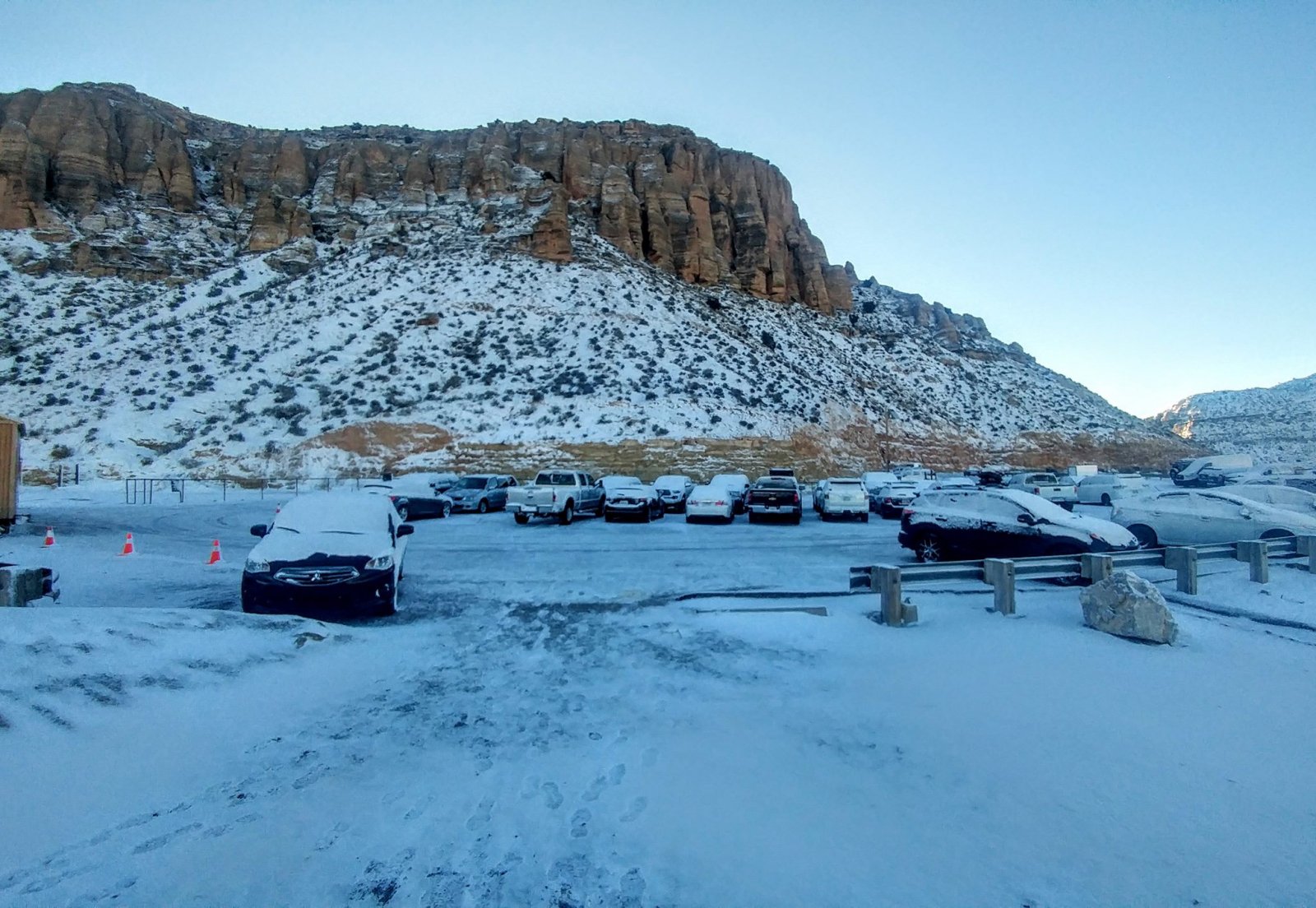 Load up some final things, put the pack on, and got ready to head down the trail. I read enough to have an idea of what to expect in this upper section: how it was real steep (1500 foot drop in 1 1/2 miles. After reviewing the conditions, I thought to myself I didn't drive this far to wait, so down the trail I went. I was by myself. People were still getting out of their car, going to the bathroom, and then heading back to their car. Plenty of parking was available but I imagine in the summer you will be parking along the road somewhere. 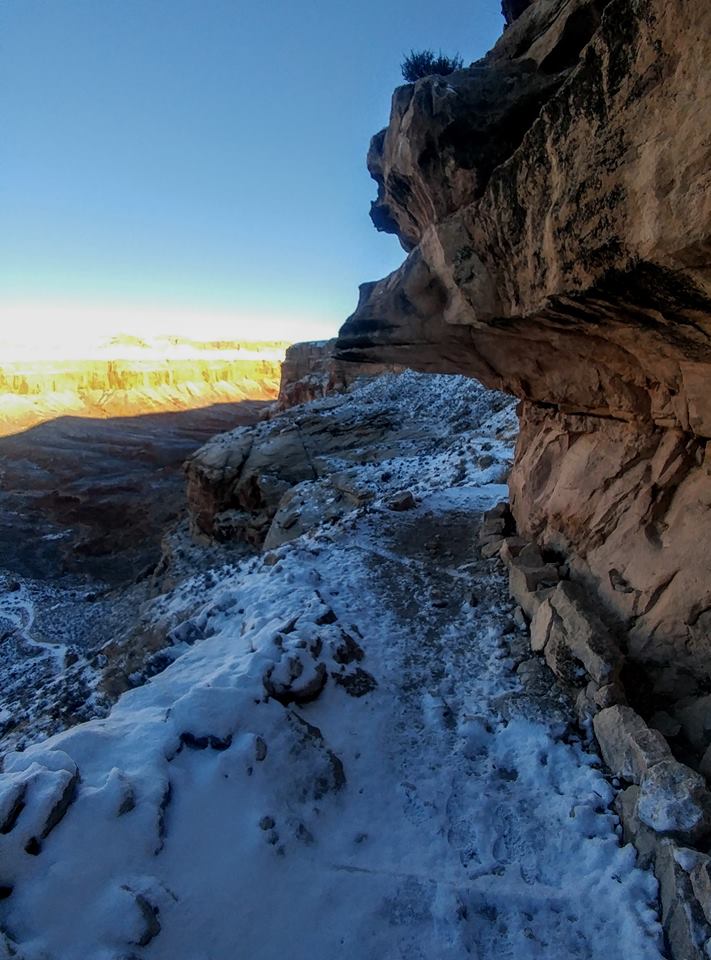 It was a bit icy, but doable without spikes. And so begins the 10 mile trek to the campsite. Beautiful scenery filled the horizon wherever I looked, and the crispness of the air and silence of my surroundings was exhilarating. I was fortunate not to have fallen a time or two with all the looking and walking. So much to look at, but I also wanted to get to the campsite and set up, so I just took a few quick stops for photos and was then on the way. The trail was rocky here and there, and past the switchbacks the grade lessened a bit and followed a ridge to the bottom of Hualapai Canyon, where I would turn right and join Havasu Canyon about 7 miles down the way. There were plenty of marine fossils if you cared to look for them. 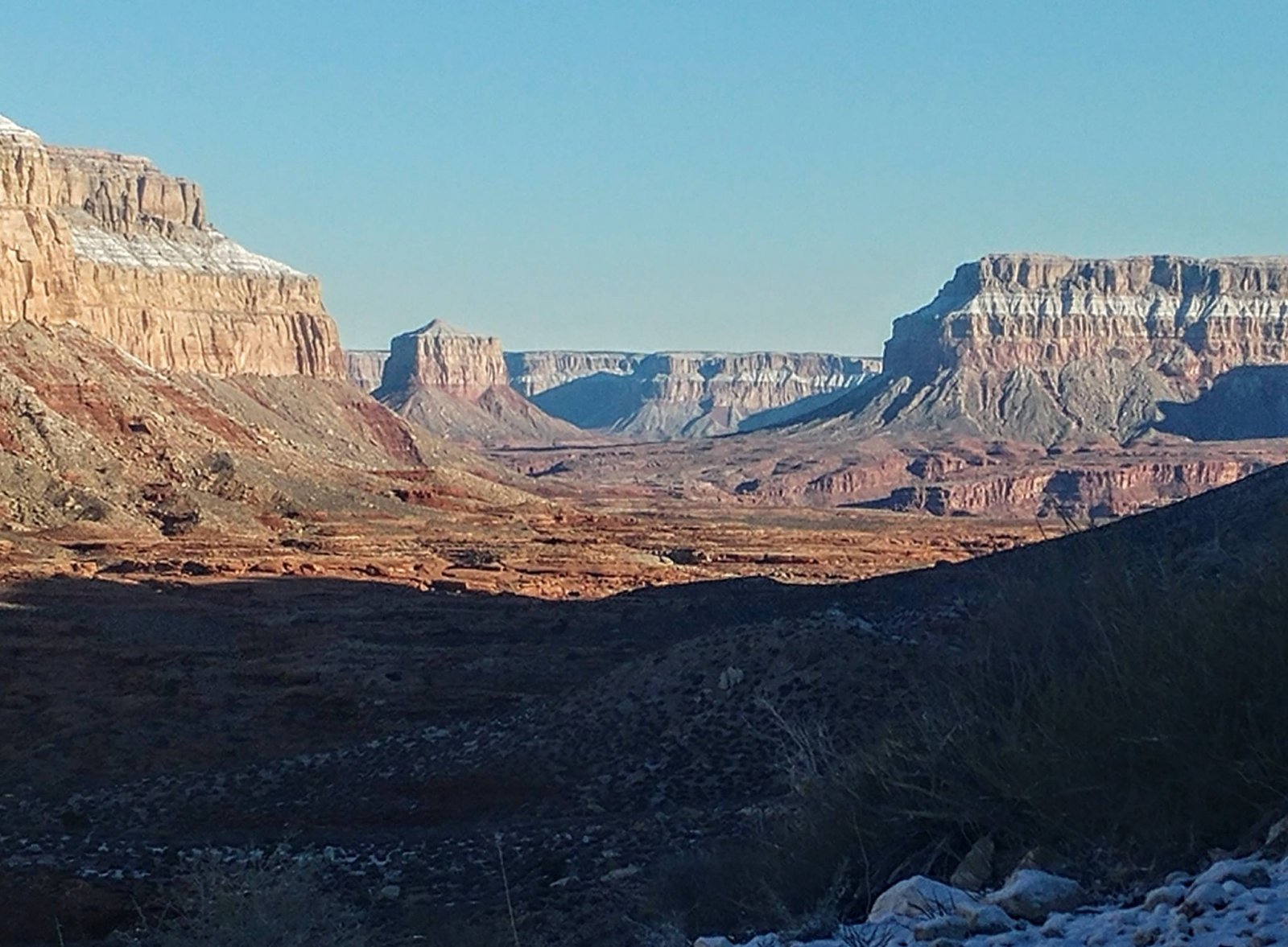 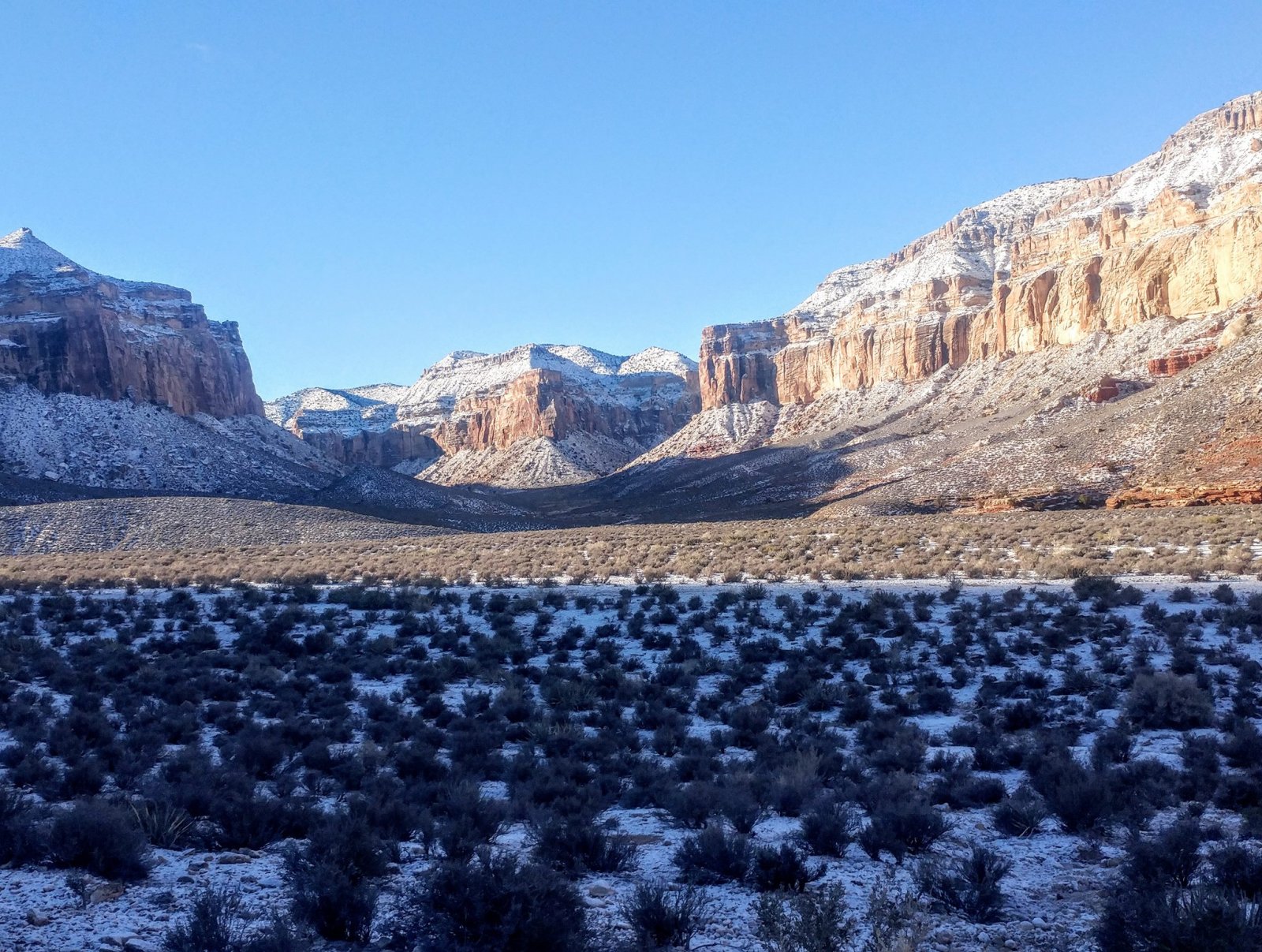 Got down the ridge without injury and just marveled at the scene ahead of me. Didn't even feel the weight of the pack much. Just so much to look at. Probably went 4-5 miles without stopping and finally came to a water break in a narrow part of the "inner gorge" as the pack mules and drivers made their way to the top. The riders were friendly. Got the pack back on and started walking a whole lot more, noticing a small seep/spring and making mental note for the return trip. Back to hiking in what I call the "narrows" of Hualapai Canyon. 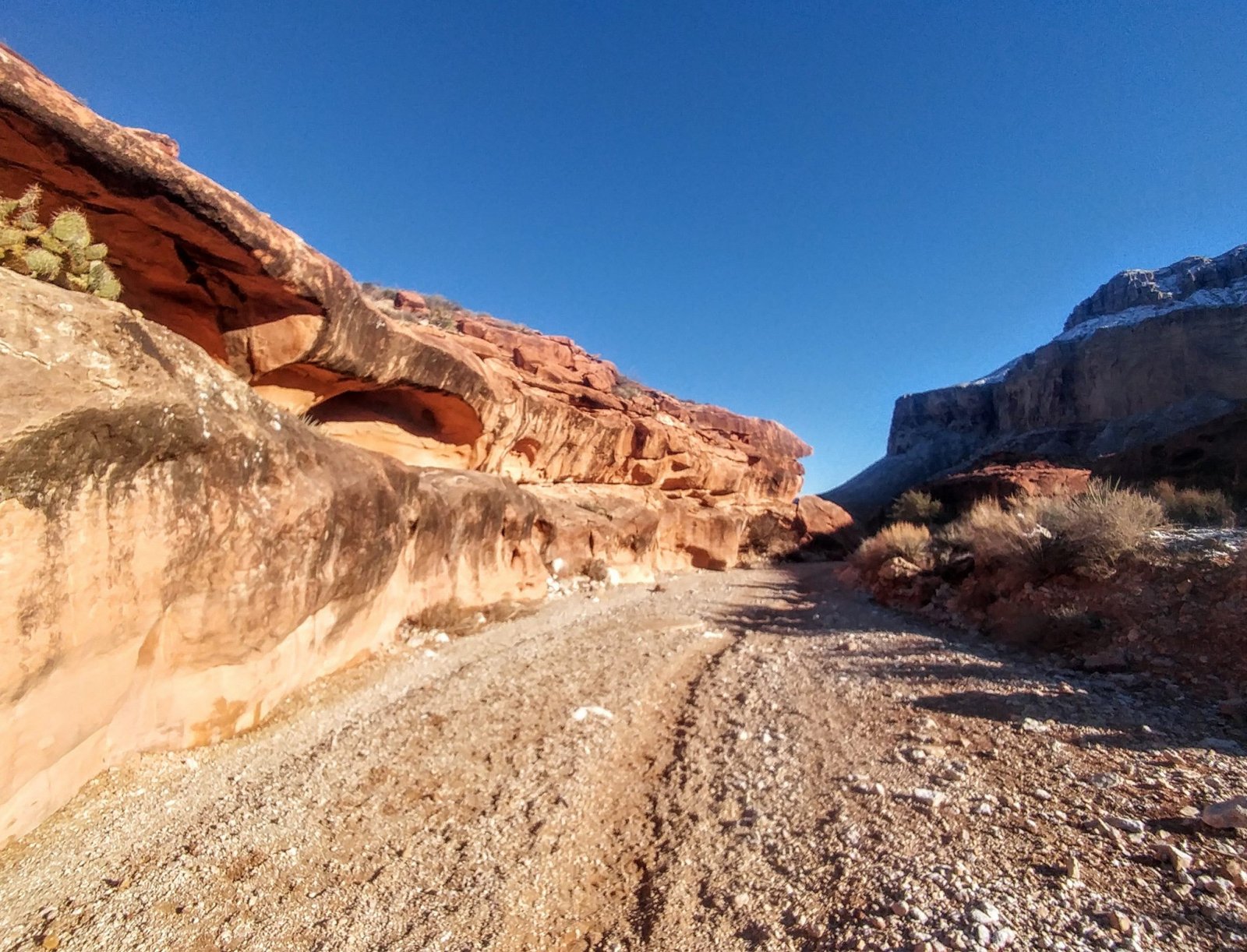 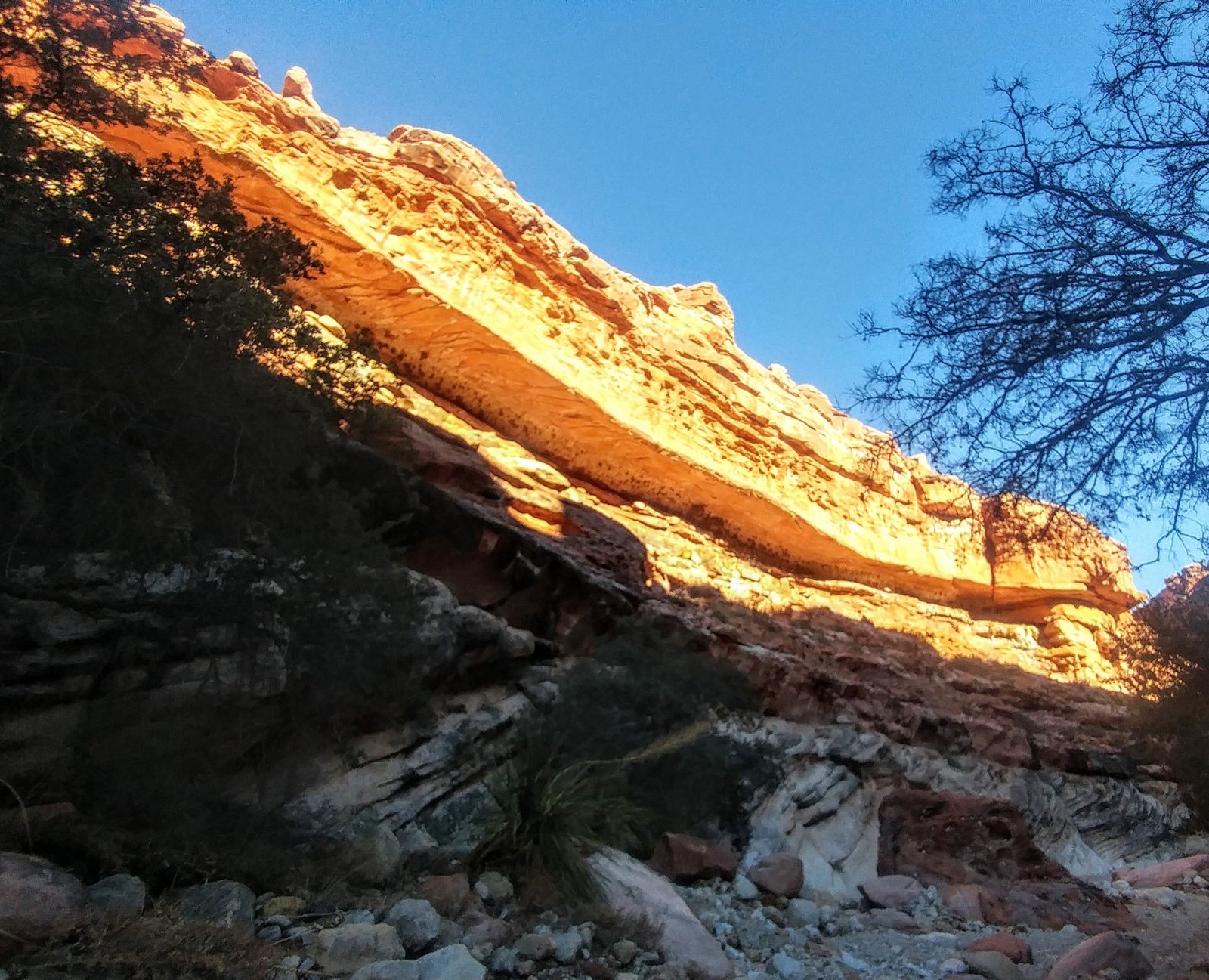 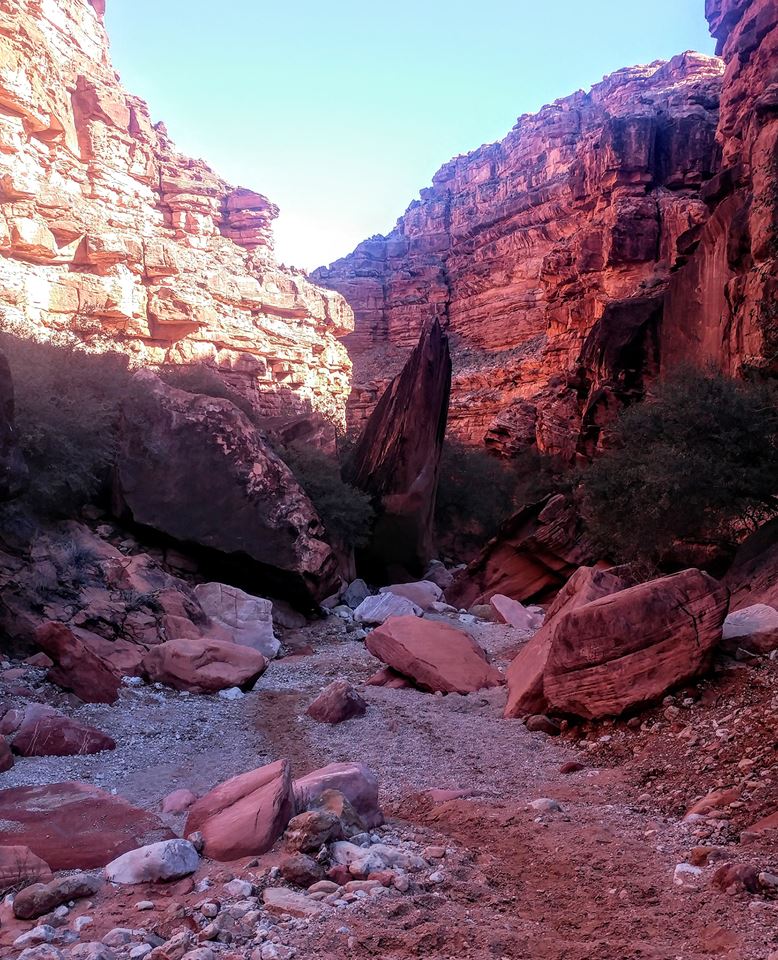 Pretty soon, I came to a sign covered with stickers. It once pointed the way to the village of Supai. I went against the grain and went off-trail to get my first glimpse of Havasu creek, not far from where it springs from the ground. It was pretty warm. Supposedly 70 degrees. I could see a small tint of the blue-green water, but not much color resembling the pictures of the water down below. 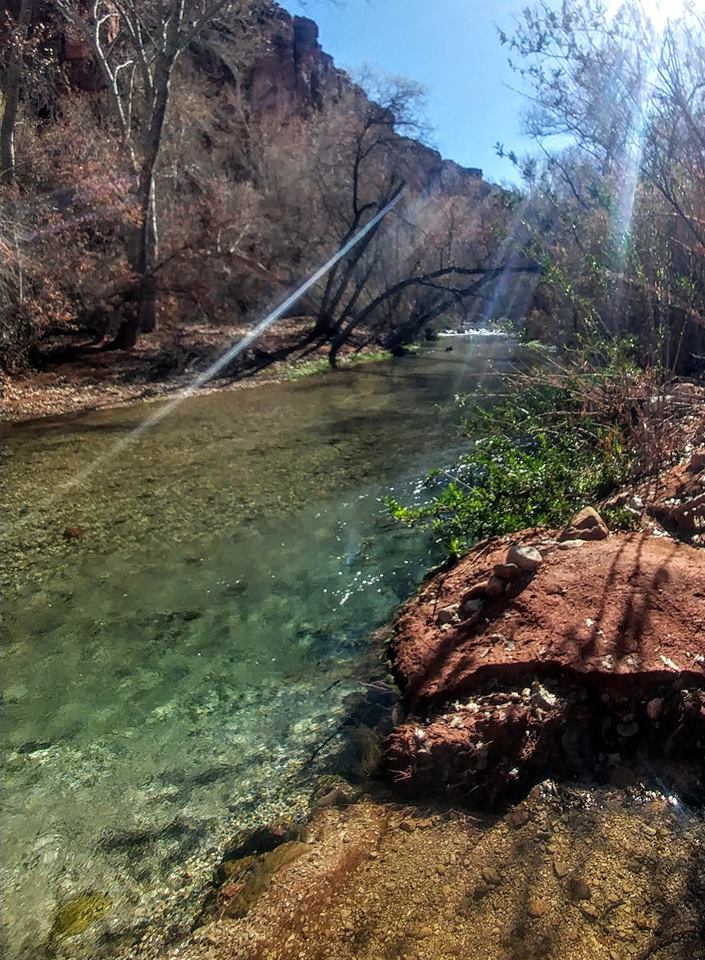 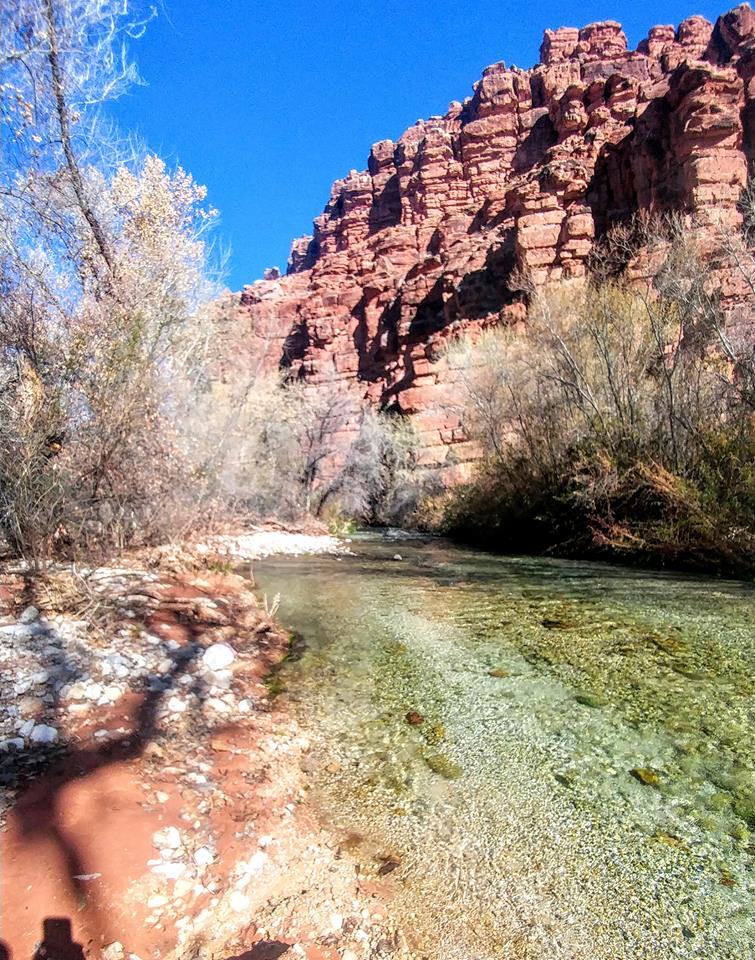 After this, it was about a mile to the village. When I got to this scene, I knew I was near: 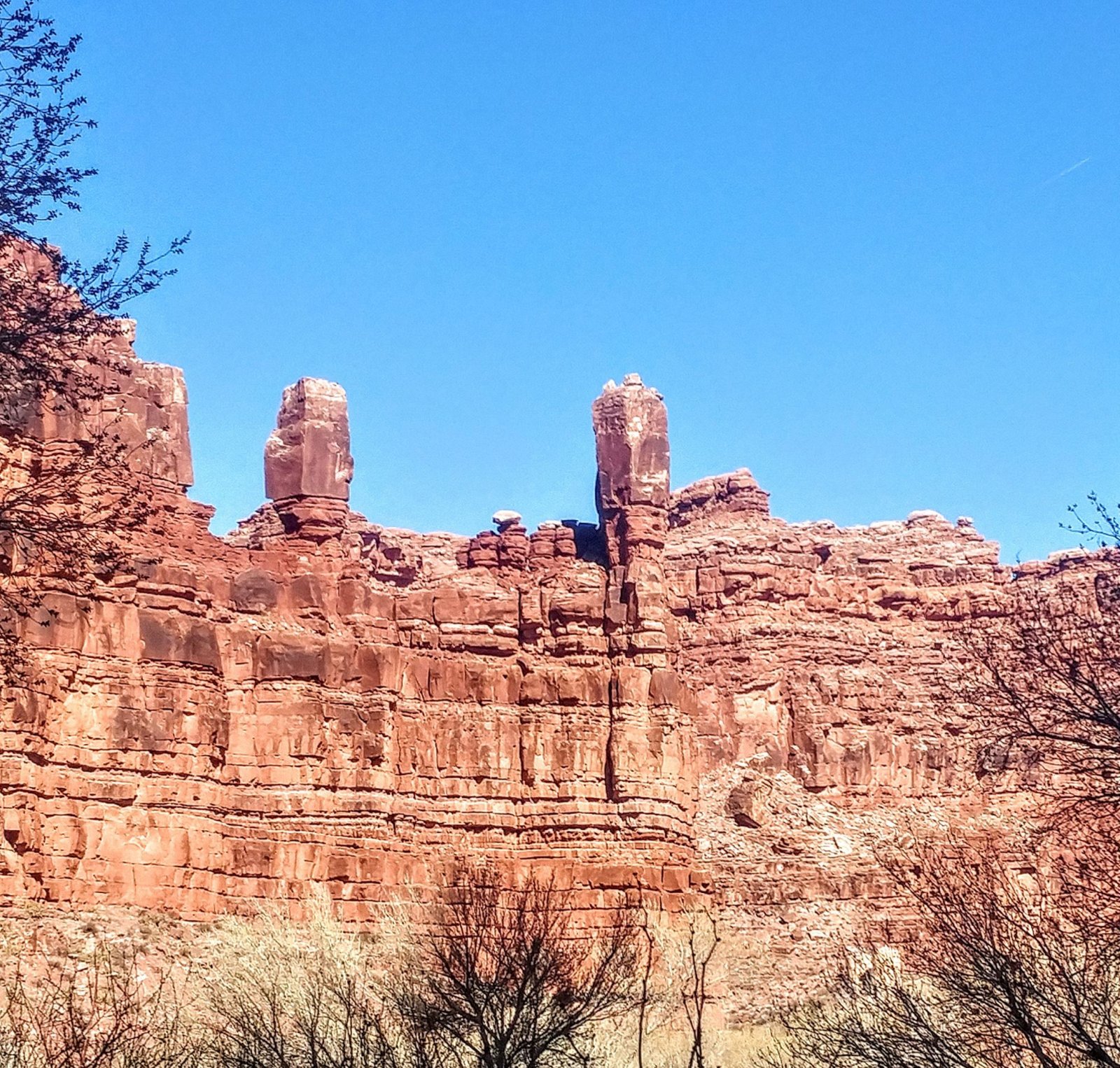 At the village, there were signs that said not to take any pictures of the village, its people, or the pack mules, so I respected that. I was soooo looking forward to a hot meal at the little diner they have there, but first, it was time to check in. Got through quickly, got the armband, and joined a couple wonderful ladies who had just got there as well. They were renting a mule to take their packs back up, but the lady was making them pay the full round-trip cost instead of one-way. I decided to join them so it cut the costs down for everyone. It was $240 bucks for 4 bags on one mule. Not $240 per person, but for the mule itself. I had planned to hike out with the pack on, but an opportunity presented itself.

We get ready to go to the diner and I noticed a sign saying it is closed for the season, and it looked like some remodeling was being done. I know Jammer is going soon, so I hope he doesn't plan on eating there. There is a small grocery store there you can buy basics. They had decent meats( I bought a pound of burger for $5.95 and some tortillas), cheeses, and stuff so you can actually buy your food down there if you wish. Canned goods, fresh vegetables, etc.... It's two miles to the campground from there. So, we headed down the trail through town and a medical helicopter landed. Oh, in the winter months, the passenger helicopter only comes on Sunday and Friday, so if you want to ride it down or back, you will need to keep that in mind. The helicopter flies 5 days a week during normal tourist months. The locals get first dibs, and then it is a first-come, first-served basis so you will need to be there real early to reserve a spot and then simply wait until your turn comes up. It was 85 bucks for the 15 minute flight back to the trailhead which I found reasonable.

Next up: Part Two- Supai Village to the Campground.

This is on my bucket list!
So excited to read the reports. Maybe you describe this later, but am curious if you had a hard time getting a permit, or even need one? Or maybe it is lotto?
Thanks for sharing!
C

Miya said:
This is on my bucket list!
So excited to read the reports. Maybe you describe this later, but am curious if you had a hard time getting a permit, or even need one? Or maybe it is lotto?
Thanks for sharing!
Click to expand...

The permit system opens up Feb 1 at 8:00am. Just once a year. Online only. In the past it was by telephone. There is a tab on the Havasu website that has a countdown, and when it opens, you hit the tab and pray. I got the circle of death several times and then messages that the system was overehelmed. After a half hour, I got through to the calender but it froze again for the next two hours. You don't get in early, you ain't getting a good time. 2 1/2 hours later i got through and the only time available was in February.
You must log in or register to reply here.
Similar threads