It was frigid when we woke Tuesday morning. We were camped near the river, which acts as a natural refrigerator. There was even a little bit of ice in my water bottle. It was so cold that I had to walk up the hill to get into the sun to get my stove to work.

We had a layover day planned that day. The goal was a long hike to see the waterfalls in the headwaters of the North Fork Buffalo. According to my map measurements, it would be about 6 ½ miles, each way. I was expecting a fairly easy hike though. A lightly used trail goes the entire way, and the terrain appeared to be fairly gentle.


We left camp with light packs around 9am under sunny skies. We returned to the trail and followed it upstream. It only took a few minutes to arrive at the first river ford. The river was thigh deep and swift, and my guidebook recommends skipping it by following game paths on the River Right side. The trail crosses back over in a half mile, so doing that eliminates two fords (in each direction).​
A mixture of game paths and bushwhacking led to a small tributary stream. Just upstream was a beaver dam, and the entire area between the creek and the river was flooded. We waded the tributary anyway, and then searched the far side for the trail. There were paths running every which way, but all of them led into the swamp. We wandered around for a while, before deciding to cross the river in hopes of finding the official trail. 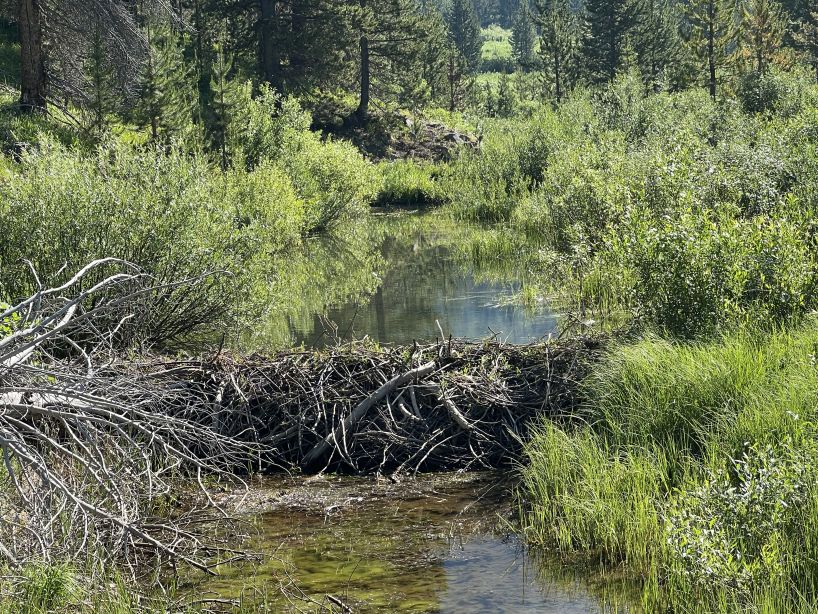 This beaver dam caused us all sorts of trouble​
The river was only knee deep in this area, but icy cold. We made it across, but all we could see was an endless sea of willows. We tried following the river upstream, but progress was slow. There was no sign of the trail. We were now way behind schedule, and we didn’t see any way to proceed. We discussed our options, and reluctantly decided to head back. It was still early enough that we could pack up and get a head start on the next day.

We crossed the river again, and I started to backtrack around the edge of the swamp. That’s when Larry called out. He had spotted an opening in the willows leading to a partially submerged track. We decided to try it, and we followed it through a flooded willow tunnel. Before long we left the swamp behind and popped out on a legitimate trail into a grassy meadow. Hurray! We were now back on the official trail, which we had crossed over unseen in the quagmire. 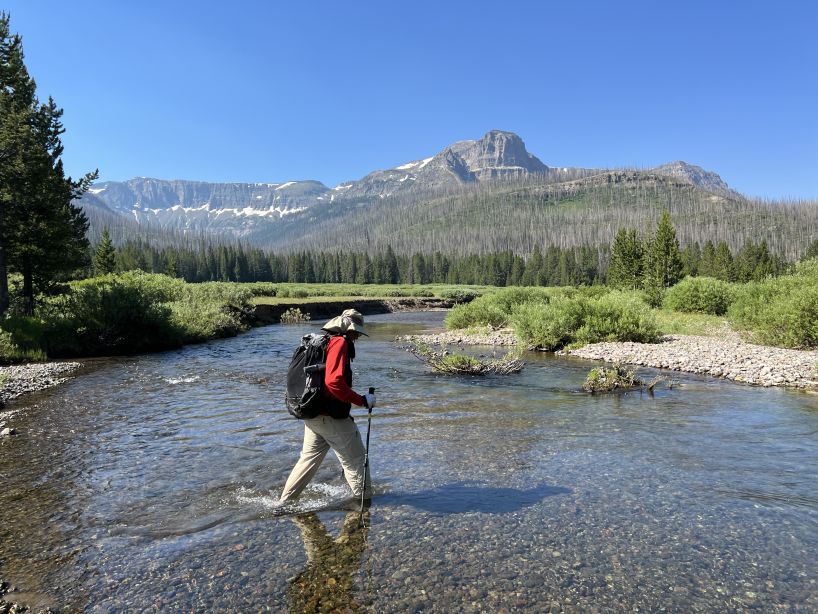 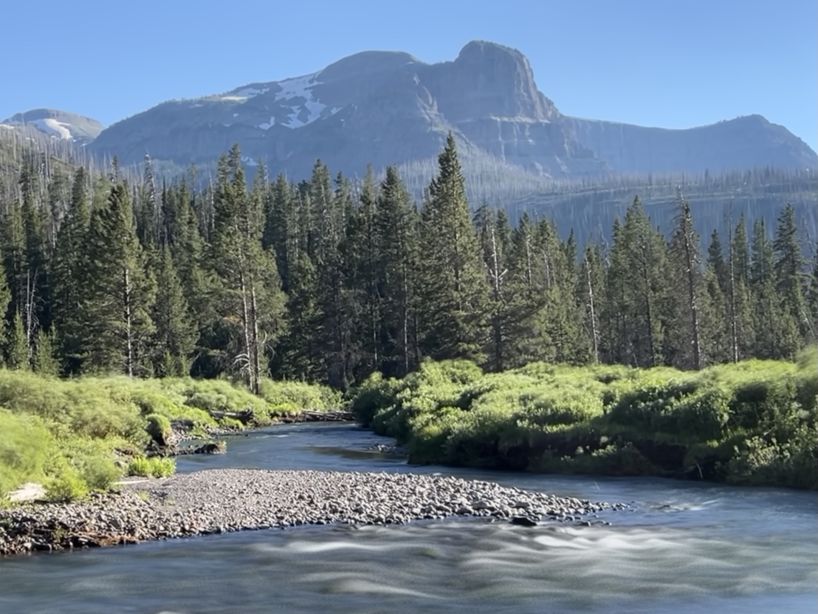 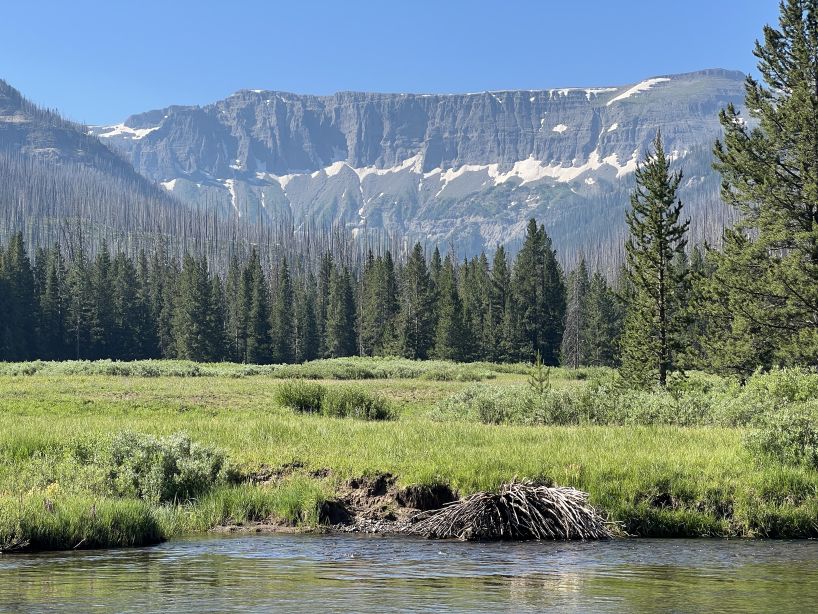 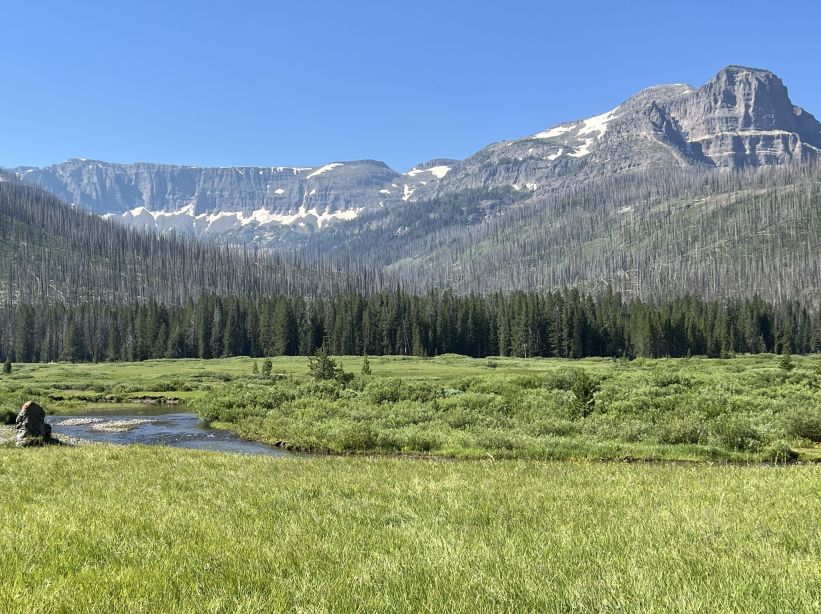 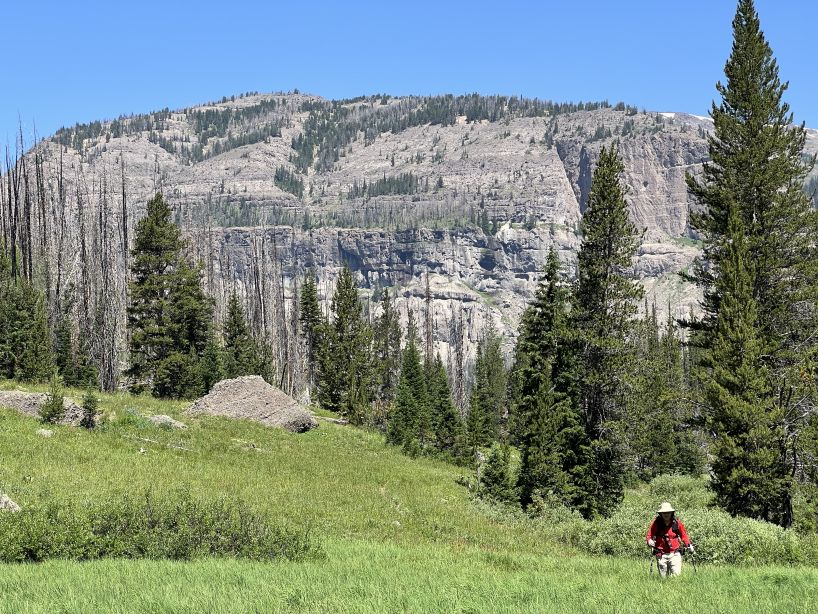 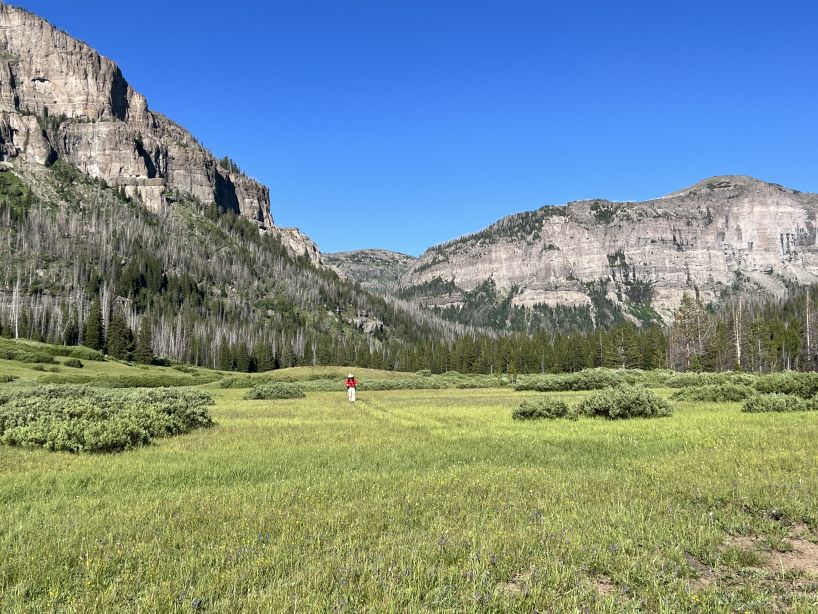 We hiked upstream, but well away from the river. The meadow was pleasant walking, and we enjoyed the views of the sheer cliffs on either side of the valley. Eventually the meadow ended, and we went back into the woods. The trail continued, but the easy walking was frequently interrupted by giant mud pits. We would either bushwhack around them or tip toe through them using logs and rocks when possible. By this point we had mud up to our knees, but we still had to worry about disappearing in one of those mud holes.

One of them caused a navigational error. I was leading, and reached one that looked impassable. I bushwhacked around, and rejoined the trail on the hillside above. Larry found a direct route through, and when he caught up to me he mentioned that he had passed a junction with another trail that forded the river. I checked the map and guidebook, and both indicated that we should stay on River Right.

We continued on the obvious trail, which gradually led up and away from the river. Soon we were contouring along the hillside above Tri-County Creek, which felt wrong. It also didn’t match the map or guidebook. After a few more minutes I concluded that we were on the wrong trail. The map doesn’t show a trail leading up Tri-County Creek, and the book doesn’t mention one, either. It’s definitely there though. My guess is that it goes to Tri-County Lake. I’d like to go back sometime and find out.

We backtracked about 10 minutes to the massive mud hole I had bushwhacked around. Larry led us through it, and we found the junction right at the edge of the river. The trail on the other side was obvious, so we decided to wade across. Initially that trail led directly away from the river, which seemed wrong. After a short climb it turned 90 degrees to the left and headed upstream, roughly paralleling the river.

After a minor climb, we reached the next meadow. We forded the river again, and rejoined the trail shown on the map and described in the guidebook. Apparently the trail was rerouted at some point. The meadow ended, and we headed back into the woods. This stretch of trail had less mud, but more fallen trees. After a short climb, we were getting close to a waterfall mentioned in the guidebook, near 8,900’. I led us off-trail at a promising spot. We actually left the trail too soon, and we endured some tough bushwhacking. Later we discovered that it would have been much easier to stay on the trail a little farther. We eventually reached the brink of a cliff high above the river. Below, the river cascaded through a boulder garden. It was a neat spot, but not a particularly attractive waterfall.

We were still way behind schedule. I was concerned about getting back to camp before dark, as the North Buffalo Fork valley is prime grizzly habitat. I at least wanted to get back through the quagmire before sunset. The other waterfalls were still over a mile away, if not two. I asked Larry what he wanted to do, and he surprised me. He voted to push on. That was all of the motivation I needed. We had come this far, what was another mile or two?

The final stretch was the toughest, with many more fallen trees and lots of steep climbs. It was worth it though. The trail climbed onto the hillside well away from the river, but I was tracking our progress using my GAIA gps app. Once we got close to the waterfall at 9,200’, I began looking for a good route down. Incredibly, a steep but open slope led right down to a great view of a gorgeous 80’ waterfall. It was a stunner, made all the more rewarding by the challenges involved in getting there. We were now about 20 miles from the nearest trailhead. Needless to say, this one is lightly visited. 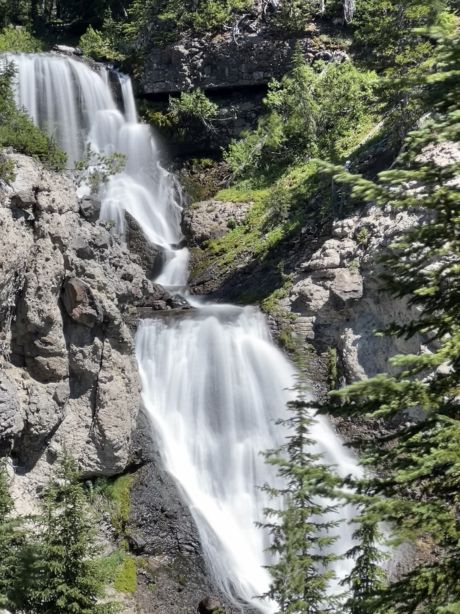 The map suggested several more waterfalls a bit farther upstream. I decided to hit them since we were so close. Larry was out of gas and moving slow. He decided to take a break and then get a head start on the hike back. 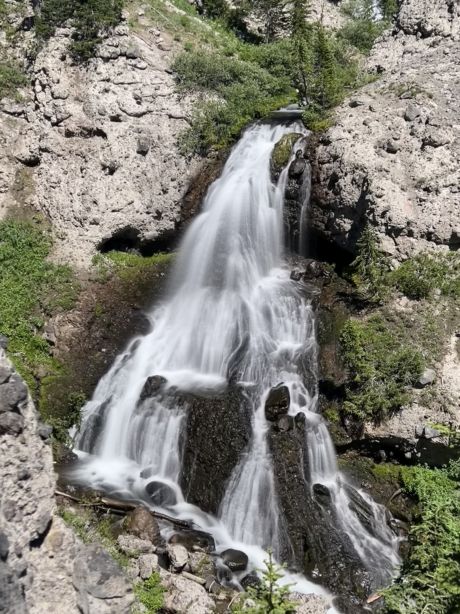 I moved fast after leaving him – maybe too fast. The steep terrain was challenging, and I was beginning to feel the altitude. After 10 minutes or so I reached a tributary stream at the base of a nice waterfall. Just after that, I left the trail heading down towards the river. That led me to a really pretty waterfall near the confluence of two forks, at about 9,350’. Just upstream were a couple of smaller falls. I thought there would be something on the other fork, but I didn’t see anything near the confluence. Based on the map, I think I needed to go a little farther upstream on that fork. However, cliffs prevented easy access. I also think there are two more waterfalls farther up the main river, at around 9,700’. I was out of gas though, and time was running short. Reluctantly, I decided to head back.

I hurried back, and caught up with Larry at the first river ford. We hiked back together from there, and we found our way back through the quagmire without incident. We reached our camp late that evening, but still well before sunset. Sunset was spectacular that night, and I enjoyed it from the brink of the falls.

I’d like to go back to the upper North Fork sometime, preferably later in the summer when it is a little less wet. I want to visit the waterfalls I missed on this trip, and check out that trail that seemed to be heading towards Tri-County Lake. I’ll bet you could even make a loop with the Upper North Fork Buffalo, Tri-County Lake, and some alpine hiking on top of the plateau.
F

Is anyone familiar with the trail that leaves the North Fork Buffalo a couple of miles upstream from North Fork Falls and heads up the valley towards Tri-County Lake? It appeared to be well-traveled, but it isn't on any map that I've seen.

Trail is there to the lake... Old outfitter trail lika a lot of them. Very visible on GE if you know where to look.
' Not All Who Wander Are Lost '

Bob said:
Trail is there to the lake... Old outfitter trail lika a lot of them. Very visible on GE if you know where to look.
Click to expand...

Thanks Bob, that's great to know!

Beautiful waterfall photos - from this and #1. Thanks for sharing!
You must log in or register to reply here.
Similar threads